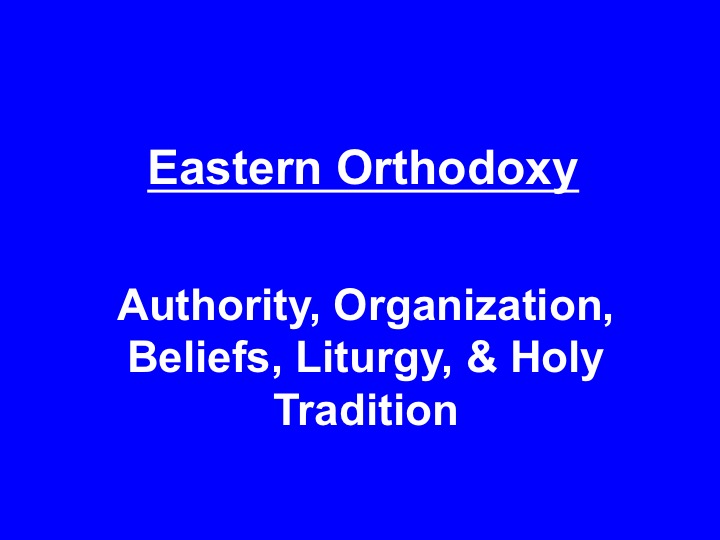 We began our study of Eastern Orthodoxy in week 1 with a review of Eastern Orthodoxy today – how big is it, where is it located, etc. We reviewed a lot of religious demographics.  And we noted that it is a very large Christian denomination and that one of its most interesting demographics today is that it is located almost exclusively in a small number of countries, mostly in Eastern Europe, and predominately in Slavic language speaking countries.

In week 2 we turned to history of the Roman Empire and Christianity in Europe to try to understand this curious concentration of one denomination of Christianity in one area. And we learned that that concentration had to do with the mission work of the Eastern Orthodox church to Slavic speaking peoples  beginning in the 9th century AD.

Today – we will turn to the Church itself and its adherents and examine the church’s authority, organization, beliefs, it’s liturgy, and what it calls Holy Tradition. 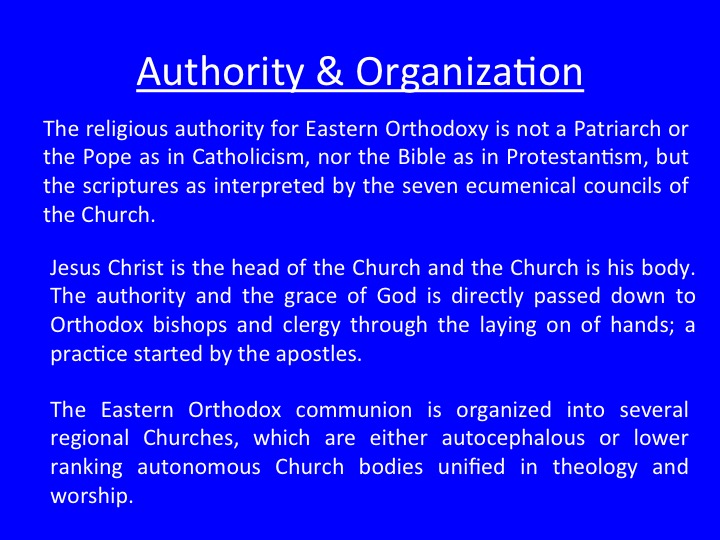 So in about 10 concentrated slides I am going to try to address most of these areas and then when it comes to the liturgy, which is most unusual to outsiders, I will try to help you experience that by viewing two short videos.

The religious authority for Eastern Orthodoxy is not a Patriarch or the Pope as in Catholicism, nor the Bible as in Protestantism, but the scriptures as interpreted by the seven ecumenical councils of the Church.

Jesus Christ is the head of the Church and the Church is his body. The authority and the grace of God is directly passed down to Orthodox bishops and clergy through the laying on of hands a practice started by the apostles.

The Eastern Orthodox communion is organized into several regional Churches, which are either autocephalous or lower ranking autonomous Church bodies unified in theology and worship. 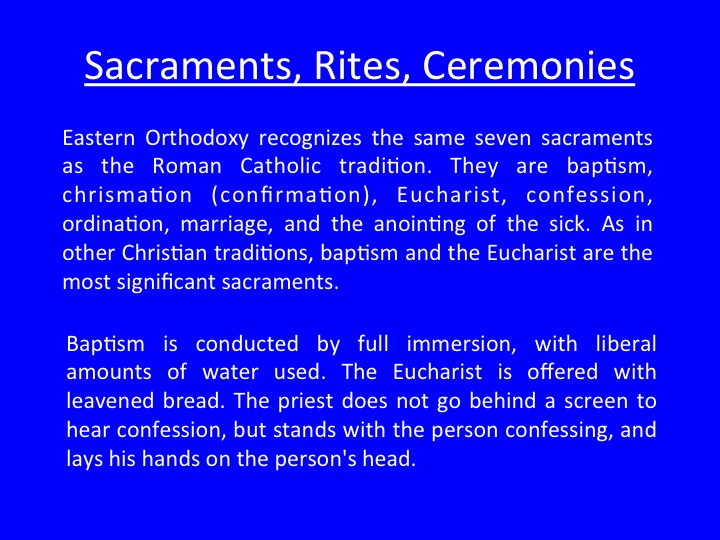 Eastern Orthodoxy recognizes the same seven sacraments as the Roman Catholic tradition. They are baptism, chrismation (confirmation), Eucharist, confession, ordination, marriage, and the anointing of the sick. As in other Christian traditions, baptism and the Eucharist are the most significant sacraments.

Baptism is conducted by full immersion, with liberal amounts of water used. The Eucharist is offered with leavened bread. The priest does not go behind a screen to hear confession, but stands with the person confessing, and lays his hands on the person's head.

Now - let's talk about this tradition's emphasis on constant prayer. 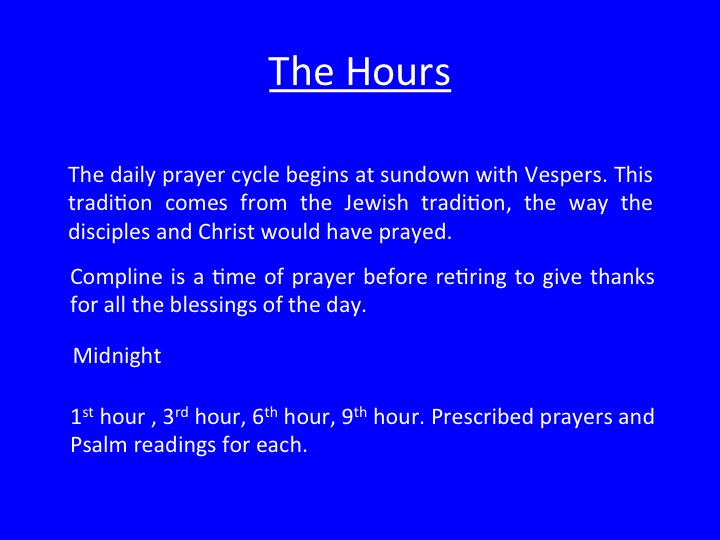 The daily prayer cycle begins at sundown with Vespers. This tradition comes from the Jewish tradition, the way the disciples and Christ would have prayed.

Compline is a time of prayer before retiring to give thanks for all the blessings of the day. 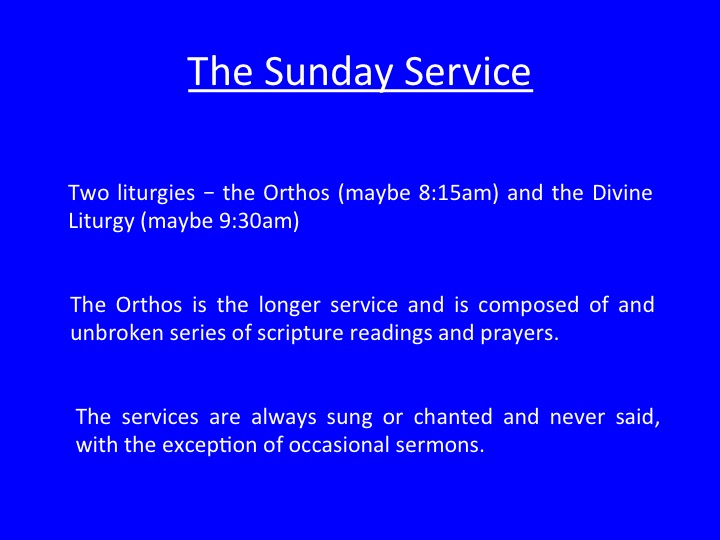 The Orthos is the longer service and is composed of and unbroken series of scripture readings and prayers.

The services are always sung or chanted and never said, with the exception of occasional sermons. 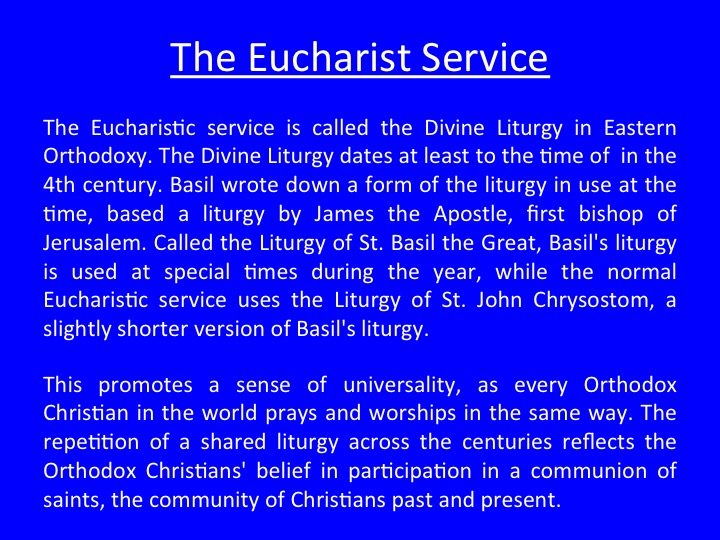 The Eucharistic service is called the Divine Liturgy in Eastern Orthodoxy. The Divine Liturgy dates at least to the time of  in the 4th century. Basil wrote down a form of the liturgy in use at the time, based a liturgy by James the Apostle, first bishop of Jerusalem. Called the Liturgy of St. Basil the Great, Basil's liturgy is used at special times during the year, while the normal Eucharistic service uses the Liturgy of St. John Chrysostom, a slightly shorter version of Basil's liturgy.

This promotes a sense of universality, as every Orthodox Christian in the world prays and worships in the same way. The repetition of a shared liturgy across the centuries reflects the Orthodox Christians' belief in participation in a communion of saints, the community of Christians past and present. 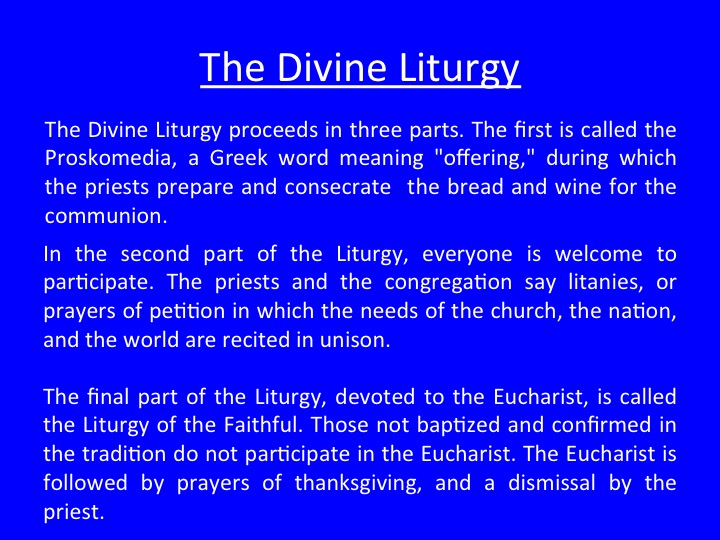 The Divine Liturgy proceeds in three parts. The first is called the Proskomedia, a Greek word meaning "offering," during which the priests prepare and consecrate  the bread and wine for the communion.

In the second part of the Liturgy, everyone is welcome to participate. The priests and the congregation say litanies, or prayers of petition in which the needs of the church, the nation, and the world are recited in unison.

The final part of the Liturgy, devoted to the Eucharist, is called the Liturgy of the Faithful. Those not baptized and confirmed in the tradition do not participate in the Eucharist. The Eucharist is followed by prayers of thanksgiving, and a dismissal by the priest. 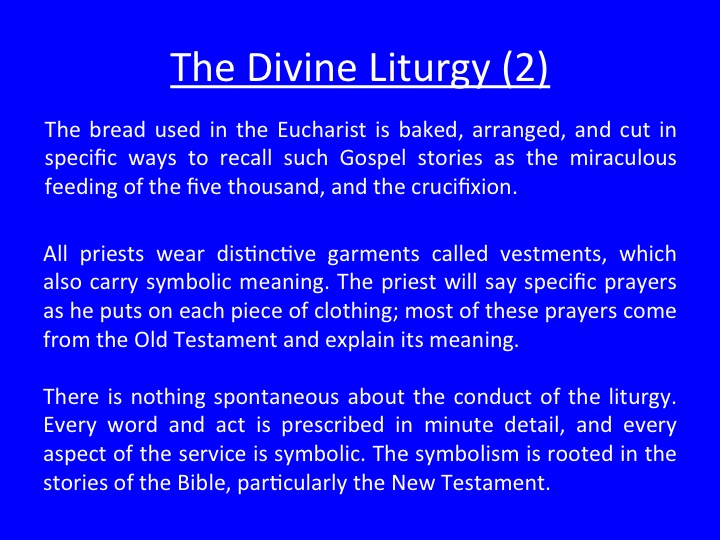 The bread used in the Eucharist is baked, arranged, and cut in specific ways to recall such Gospel stories as the miraculous feeding of the five thousand, and the crucifixion.

All priests wear distinctive garments called vestments, which also carry symbolic meaning. The priest will say specific prayers as he puts on each piece of clothing; most of these prayers come from the Old Testament and explain its meaning. For example, when the priest puts on a cloth belt called a zone or girdle, he prays, "Blessed is God, who girds me with power and has made my way blameless. He strengthens my feet like hind's feet and sets me on high places" (from Habakkuk 3:19).

There is nothing spontaneous about the conduct of the liturgy. Every word and act is prescribed in minute detail, and every aspect of the service is symbolic. The symbolism is rooted in the stories of the Bible, particularly the New Testament. For example, the wine used in the Eucharist must be red, because that is the color of blood. It is mixed with water, because the Gospel of John reports that after Jesus had died on the cross, a soldier pierced his side with a spear and blood and water flowed out (John 19:33-35). 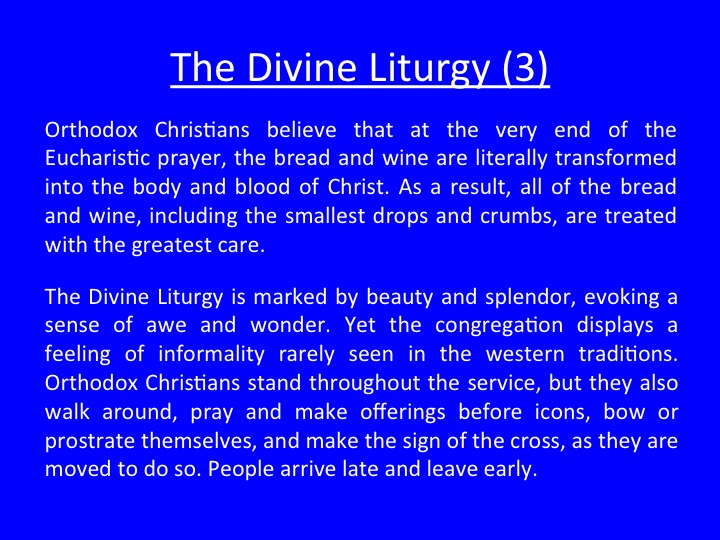 Orthodox Christians believe that at the very end of the Eucharistic prayer, the bread and wine are literally transformed into the body and blood of Christ. As a result, all of the bread and wine, including the smallest drops and crumbs, are treated with the greatest care.

The Divine Liturgy is marked by beauty and splendor, evoking a sense of awe and wonder. Yet the congregation displays a feeling of informality rarely seen in the western traditions. Orthodox Christians stand throughout the service, but they also walk around, pray and make offerings before icons, bow or prostrate themselves, and make the sign of the cross, as they are moved to do so. People arrive late and leave early. 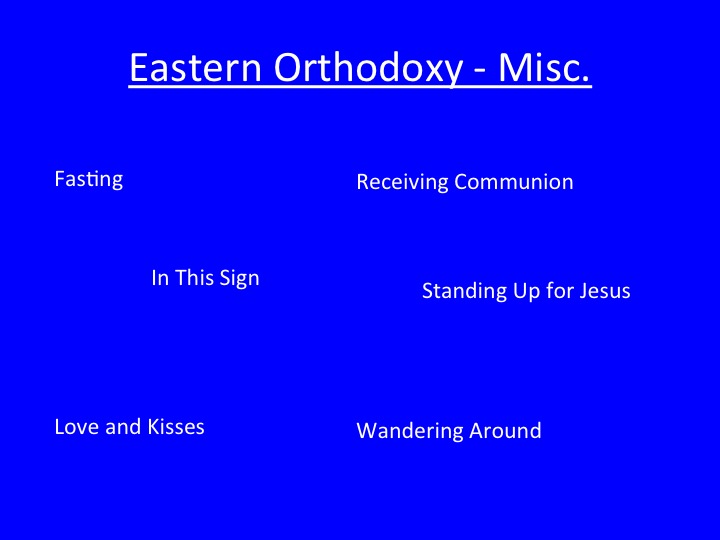 Fasting - When newcomers learn of the Orthodox practice, their usual reaction is, "You must be kidding." They fast from meat, fish, dairy products, wine and olive oil nearly every Wednesday and Friday, and during four other periods during the year, the longest being Great Lent before Pascha (Easter). This adds up to nearly half the year. With the counsel of their priest, people decide to what extent they can keep these fasts, both physically and spiritually--attempting too much rigor too soon breeds frustration and defeat.

The important point is that the fast is not rigid rules that you break at grave risk, nor is it a punishment for sin. Fasting is exercise to stretch and strengthen us, medicine for our souls' health.

In this sign - you will notice in observing one of these liturgies that the Eastern Orthodox seem to be constantly giving the sign of the cross. It is what they do. Anytime a priest or Bishop says "In the name of the Father, the Son, and the Holy Spirit", which is frequently, most celebrants will give the sign of the cross. And it is often done with the fingers held in a symbolic manner - the thumb, index and middle fingers held together (the Trinity), and the last two fingers held down on the palm of the hand (the two natures of Christ - fully human and fully divine).

Love and Kisses. The Eastern Orthodox kiss things frequently - the Icons, the Bible, the hand of the priest, each other.

Receiving Communion – bread, water, wine. Once consecrated, the wine (blood), water, and bread (body) are combined into chalices for serving the communicants. They are served potions of the bread (body) saturated with the wine (body) and water from a golden spoon.

Wandering Around - for a liturgy that is so traditional and prescribed it is interesting to observe that the congregation seems to be almost disrespectfully moving around. Walking to the front of the church to deposit a candle or kiss and icon. Arriving late or leaving early.  But it is not a problem. 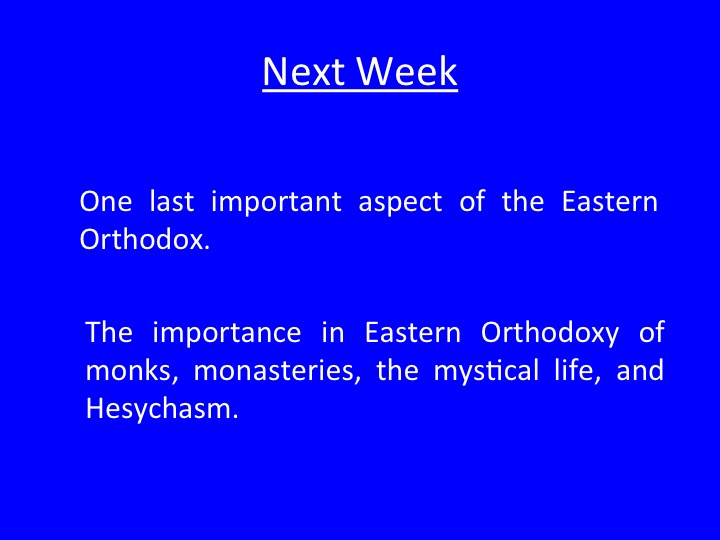