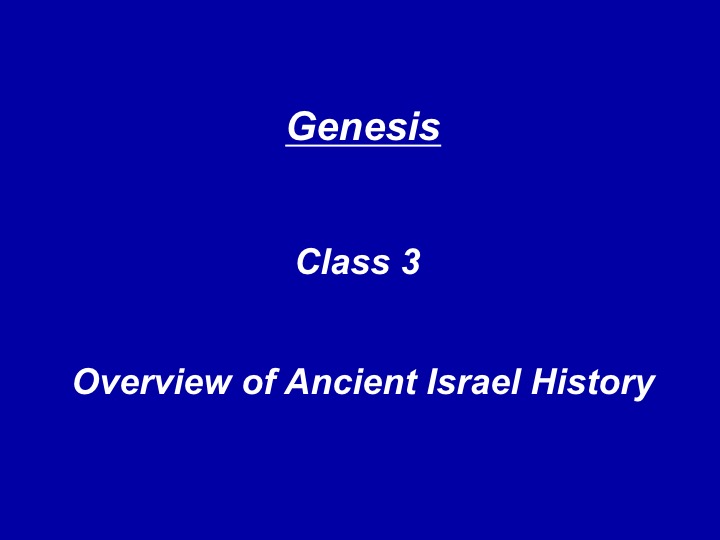 Today we are going to turn to what might be described as the basic material necessary for the study of the Hebrew Bible.  We are going to trace the history of ancient Israel from Abraham, the first patriarch, all the way to the conquest of Alexander the Great in 333 B.C. Our study of Genesis will focus on the earlier period only, but an overview of the entire 1,000-year period is necessary for other questions that we will address in this study.

After we cover that history, in admittedly a Readers Digest version, we will then cover a possible history of when all of the books were written, which also covers about 1000 years – although not the same 1000 years. Then we also will discuss the development of the biblical canon, that is, how and when the books of the Bible came to be considered sacred. 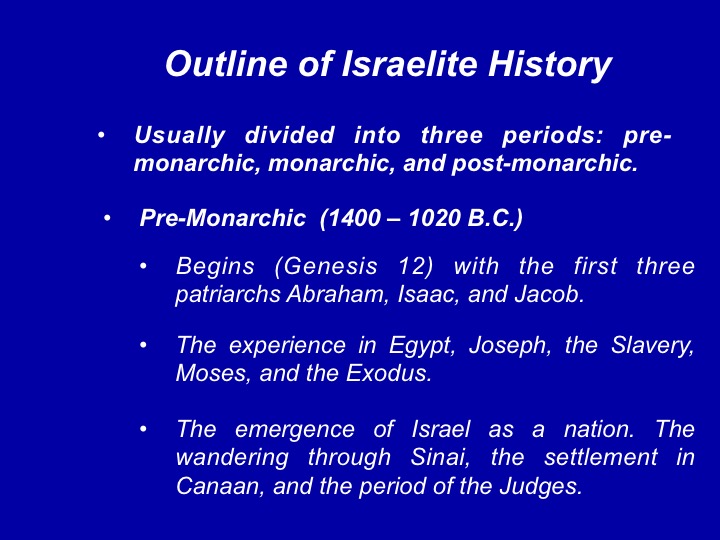 We present here a basic outline of Israelite history.

1. The biblical tradition begins with the three patriarchs Abraham, Isaac, and Jacob.

2. We then read of the experience in Egypt, with the highlights being Joseph, the Slavery, Moses, and the Exodus.

3. This, in turn, is followed by what we call the emergence of Israel as a nation. Three shorter periods fit here: the wandering through Sinai, the settlement in Canaan, and the period of the Judges.

The settlement in Canaan is described in Joshua, and represents the military capture of the Land of Canaan by Joshua, the successor to Moses. The period of the Judges represents the gradual transition of the tribes of the Israelites into a nation – led by a series of chieftains who arose when needed to subdue the Canaanite and Philistine inhabitants that continued to press against the Israelites.  The term Judges is a bit misleading as these leaders, like Deborah and Samson, and many others, were not legal judges but charismatic military leaders. The Judges were the interim leaders before the monarchs Saul, David, and Solomon. 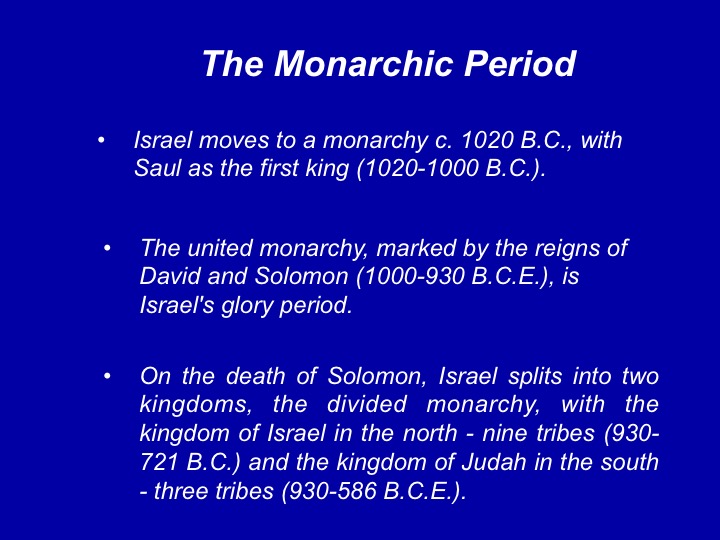 The next major epoch is the monarchic period.

On the death of Solomon, Israel splits into two kingdoms, what we call the period of the divided monarchy, with the kingdom of Israel in the north comprised of nine tribes (930- 721 B.C.E.) and the kingdom in Judah in the south comprised of three tribes (930-586 B.C.E.). The division was caused by political differences, and the two Kingdoms never got along after that. 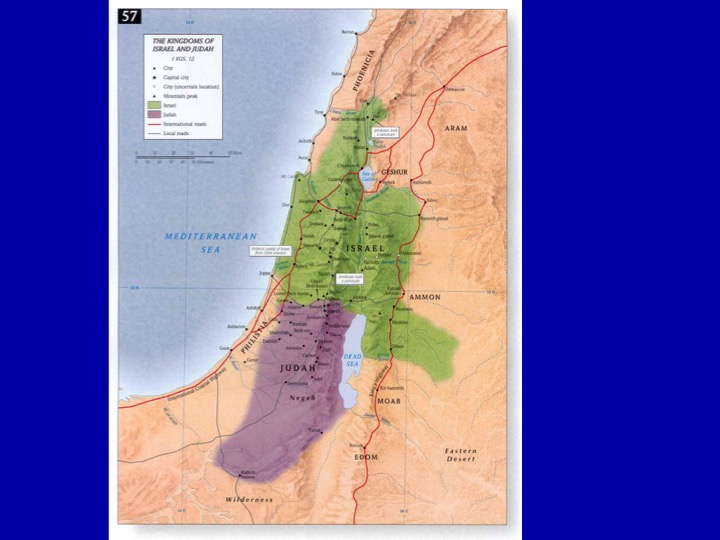 This map is an attempt to show you the divided Kingdoms.  As I am sure you are aware – there were no formal boundaries in the ancient world.  But from piecing together the narrative in the biblical stories this is believed to be the boundaries.

The northern kingdom never did have a consistent royal family like the family of the Davidic Kings.  It did have a formal capital in the city of Samaria and it It lasted for 209 years and we will talk about what happened to it in a few minutes.

The southern Kingdom of Judah by contrast survived for 394 years after the formation of the divided monarchies.  During that entire period the family of David and Solomon ruled it. 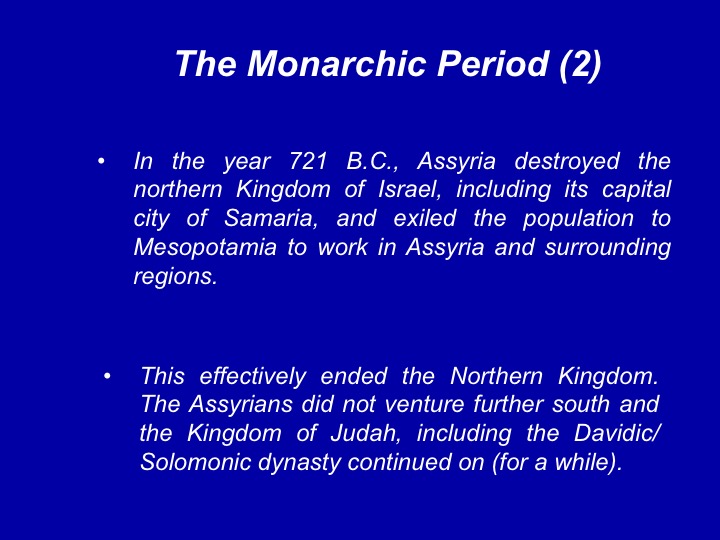 In the year 721 B.C.E., Assyria destroyed the northern kingdom of Israel, including its capital city of Samaria, and exiled the population to Mesopotamia to work in Assyria and surrounding regions.  We will talk about the nature of this exile later.

This effectively ended the northern Kingdom of Israel and we never hear from it again in the Biblical narrative.  Fortunately for Judah the Assyrians apparently had enough problems of their own, possibly back home, that they did not venture further south and attempt to conquer Judah. 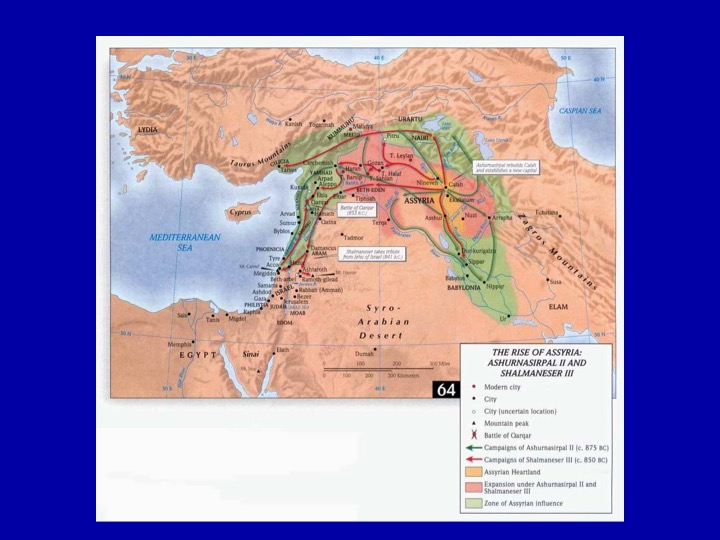 This is an approximate map of the Assyrian Empire in about 850 B.C., which was about a century before Samaria was destroyed.  It was eventually slightly larger than this but still did not extend to the Kingdom of Judah. 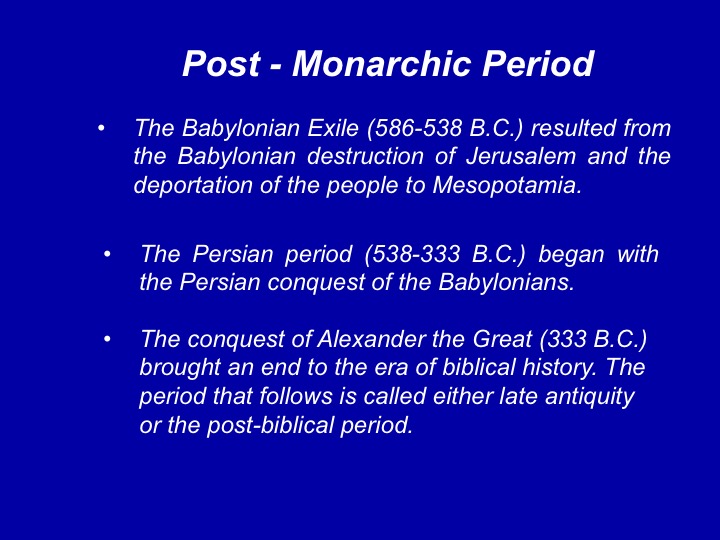 Finally, there is the late period, closing out the era of biblical history. There were three distinct periods in the Post – Monarchic  period.

1. The Babylonian Exile (586-538 B.C.E.) resulted from the Babylonian destruction of Jerusalem and the deportation of the people to Mesopotamia.

2. The Persian period (538-333 B.C.E.) commenced with the Persian conquest of the Babylonians and the decree by their king, Cyrus the Great, to allow the Jews to return to Jerusalem and rebuild the Temple, which was dedicated in the city of Jerusalem in the year 516 B.C.E.

3. The conquest of Alexander the Great (333 B.C.E.) brought an end to the era of biblical history. The period that follows is called either late antiquity or the post-biblical period. 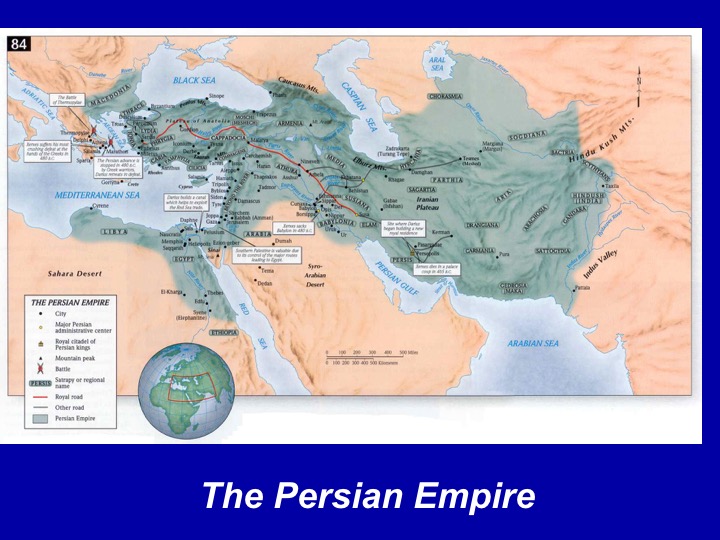 Let’s look quickly at two maps – showing the extent of the Persian Empire, and the Greek Empire.

From a strategic standpoint the Persians, under their King Cyrus the Great, had a very different philosophical approach to conquered lands. Cyrus was politically shrewd, modeling himself as the "savior" of conquered nations, often allowing displaced people to return, and giving his subjects freedom to practice local customs. To reinforce this image, he instituted policies of religious freedom, and restored temples and other infrastructure in the newly acquired cities.

In the book of Ezra a decree of Cyrus is recorded that decrees that the people of Judah are allowed to return to Jerusalem to rebuild their temple. 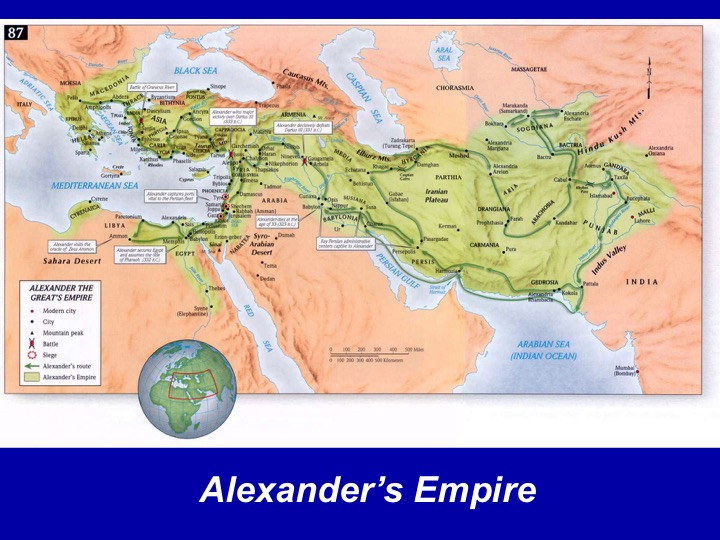 The victory of Alexandria in 333 B.C. is considered to be the end of the historical period known as the Ancient Near East and the end of the Hebrew Bible history. It also marked a major cultural shift in the Near East as for the first time their was a truly foreign power in the region that had been dominated before by powers that were very similar in culture.

The following era has been called late antiquity, the Hellenistic period, the Greco Roman world. It was the world of the New Testament. 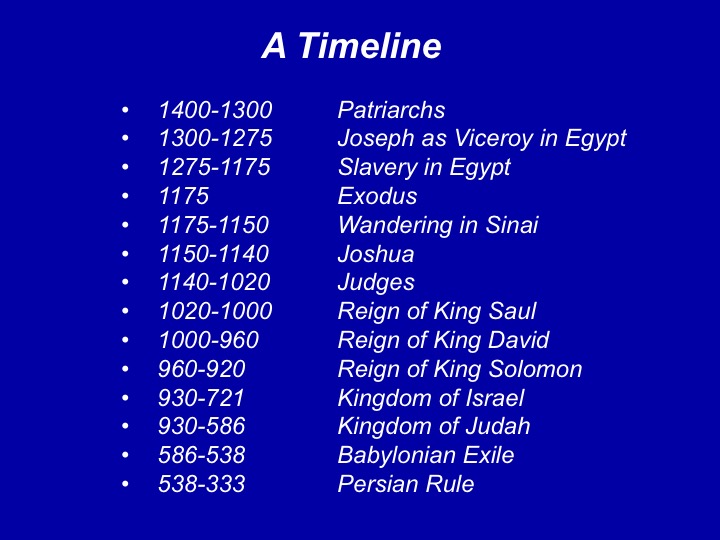 The history just presented can be summarized in this timeline. 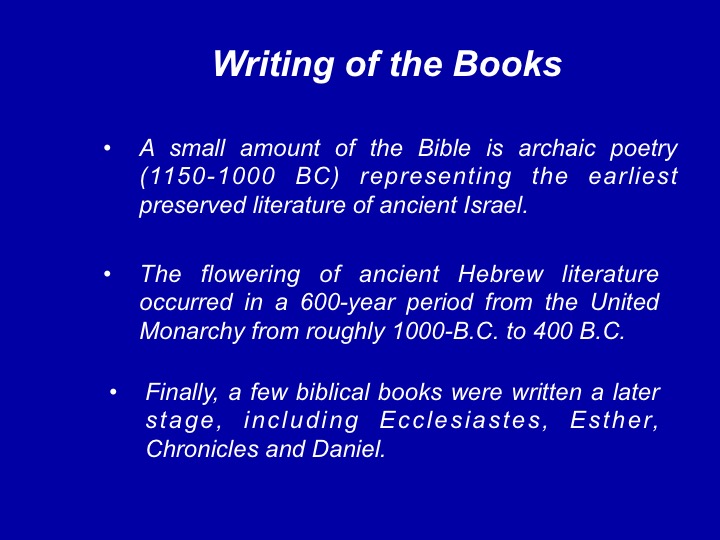 We now tum to surveying the development of the biblical canon of the Tanak, and that includes when they were written as well as when they became canonized.

1. A small amount of the Bible is archaic poetry (1150-1000 BC) representing the earliest preserved literature of ancient Israel. Examples include Exodus 15, some snippets in Numbers 21, and Judges 5.

2. But the flowering of ancient Hebrew literature occurred during the 600-year period commencing with the United Monarchy in about 1000-B.C. and continuing into and beyond the Babylonian Exile.

a. The most important represent of this literary productivity, especially for our narrative is from Genesis through Kings.

b. A second category in this period is that of the classical prophets (Isaiah, Jeremiah. Ezekiel, etc.).

c. A number of other important books date to this period, too, including Psalms. Lamentations, and Ezra-Nehemiah. 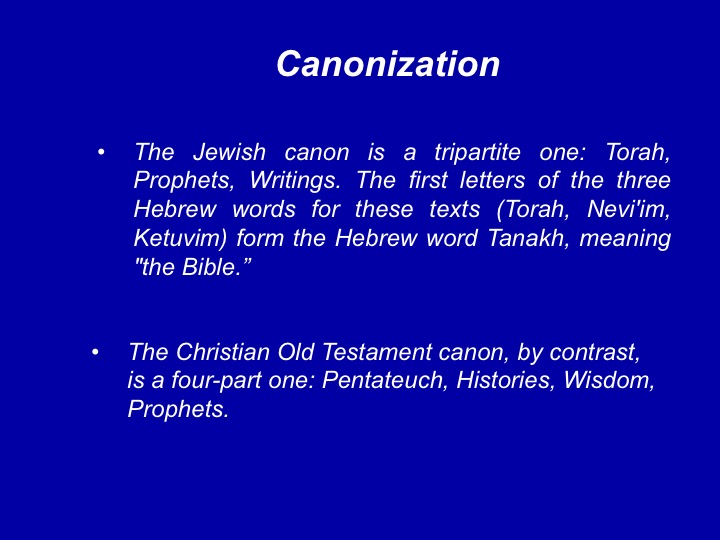 The canonization of the biblical books is another matter. The books did not become holy or sacred or canonized overnight. Much time passed between the authorship of these books and the establishment of a canon, or collection of sacred writings.

The Jewish canon is a tripartite one: Torah, Prophets, Writings. The first letters of the three Hebrew words for these texts (Torah, Nevi'im, Ketuvim) form the Hebrew word Tanakh, meaning "the Bible."  Roughly it is believed that the Torah was defined as canon by about 400 B.C., the Phrophets possibly by 100 B.C. and the Writings by about 150 A.D.

The Christian Old Testament canon, by contrast, is a four-part one:

Pentateuch, Histories, Wisdom, Prophets. Christians call this the Old Testament, to which were added additional books, known as the Apocrypha (though these are not canonical in the Protestant tradition).

In our next lesson we will review the Ancient Near East - some history, culture, and religious activity.