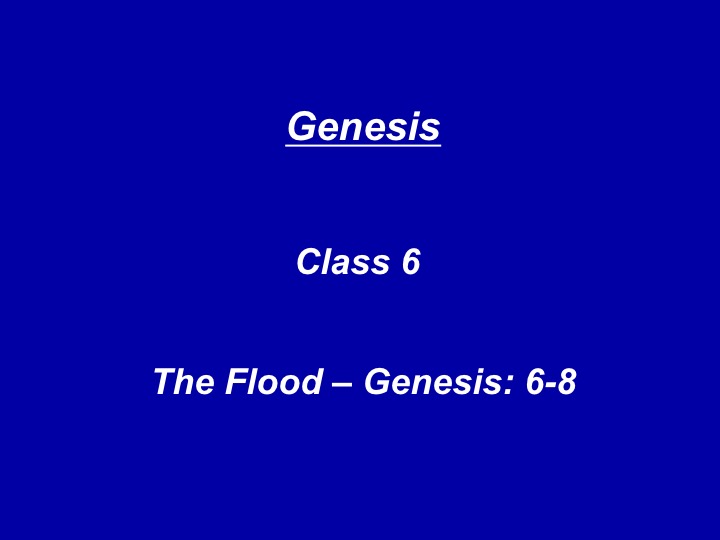 We return to our reading of the book of Genesis by looking in some detail at chapters 6-8, the story of Noah and the flood. This story provides us with an excellent opportunity to apply information learned in the previous classes. Those were the three contextual classes on the history of the people of Israel three weeks ago, then the review of what we know about the ancient near east two weeks ago – especially some of the literature that we have recovered in the late 19th and 20th centuries, and then last week the documentary hypothesis. And I am sure you have not forgotten any of that detailed material.

So we had a reason for covering that material – and today you may see that.

Because today, while reading from the flood story, we will compare the biblical account to the flood story incorporated into the Gilgamesh Epic, the great literary classic of ancient Mesopotamia that we briefly reviewed two weeks ago. We will note many points of similarity between the stories – in fact some amazing similarities, but we will also emphasize several crucial differences. Second, we will read chapters 6-8 in two different fashions: first in the light of the JEDP theory, which sees two sources – the J source and the P sources completely intertwined in the text, Then we will look at it as a literary whole, in opposition to the above approach, thereby illustrating the contrasting methods.

So – hold onto your hats. 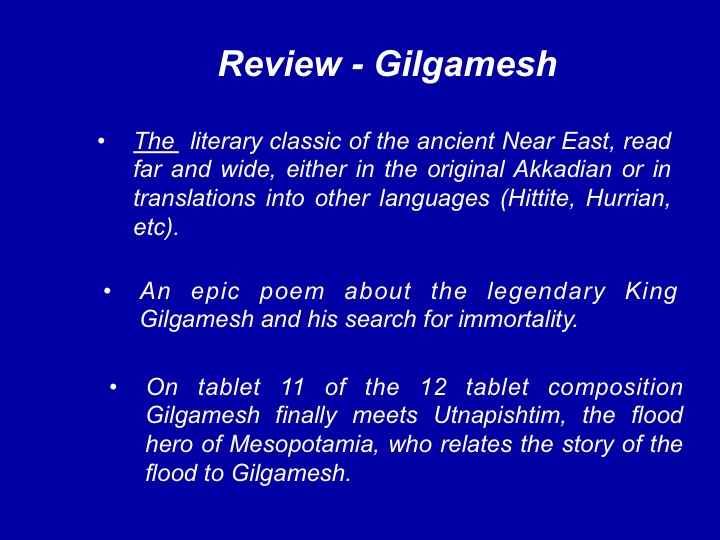 The Gilgamesh Epic was the literary classic of the ancient Near East, read far and wide, either in the original Akkadian (Babylonian) by people educated in that language (even if it was not their native tongue) or in translations into other languages (Hittite, Hurrian, and so on).

This lengthy (by ancient Near Eastern standards) composition is an epic poem about the search for immortality of the legendary king Gilgamesh (from the southern Mesopotamian city of Uruk).

Among the scenes narrated toward the end of the epic is Gilgamesh's visit to Utnapishtim, the flood hero, who relates to Gilgamesh the story of the flood (occurring in Tablet XI of the 12- tablet composition). 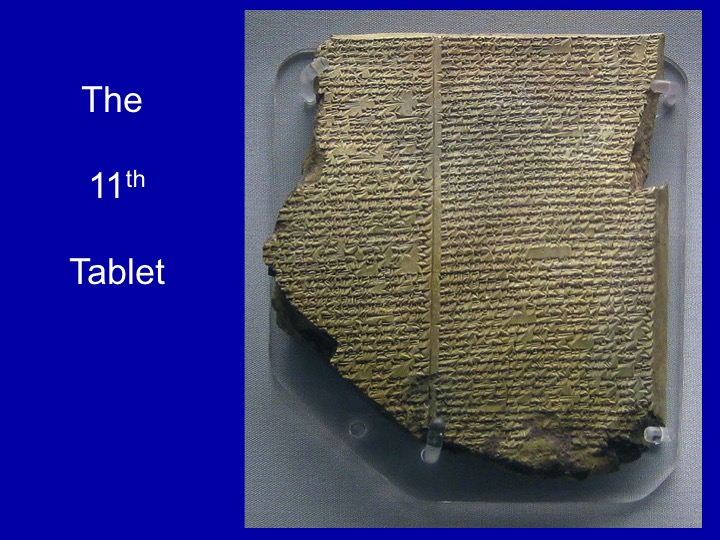 This is the famous 11th (of 12) tablet of the Gilgamesh epic.  It is written in Cuneiform.  It was discovered in Iraq in about 1878.

There is an interesting human interest story here. A remarkable layman named George Smith, was the first person to realize there was this remarkable flood story, because the 11th tablet was one of the last ones uncovered. Smith was strictly an amateur – his day job was as an engraver. But he became so interested in the discoveries pouring in from Iraq from the excavations of the ancient city of Ninevah – the ancient capital of Assyria – that he taught himself how to read the ancient Cuneiform script in the Akkadian language and volunteered to translate the tablets as they arrived at the British Museum in London. As he worked into the night he realized this tablet was part of the Gilgamesh epic and for the first time read the flood story.  He described later in his memoirs the excitement he felt as he read about the birds being sent out from the boat and realized how similar that was to the biblical account.

Now – it has become popular since that time to state that the Gilgamesh epic is so similar that the biblical story was copied from it. And as you might expect there is a counter argument that the Gilgamesh flood story was copied from the Israelite version.  But being a natural cynic I always go read them myself.  I have the English translation of the Gilgamesh epic and of course I have read the biblical version many times.  And I can tell you that there are definitely some similarities that suggest there was a flood tradition in Mesopotamia that was similar to the Genesis flood story but it takes some real imagination to believe there was any exact copying done in either direction. 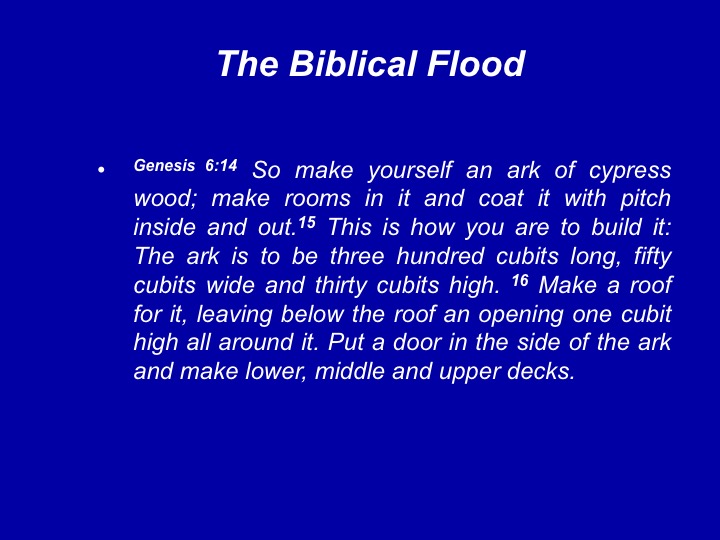 Now – we cannot possibly read all of the Biblical flood story in detail along with the Gilgamesh epic.  But I have excerpted some of the critical texts from both to show you how they compare. And don’t worry – I will be reading Gilgamesh in English  - not Akkadian.

Let’s start with the instructions God gave to Noah for building the ark. 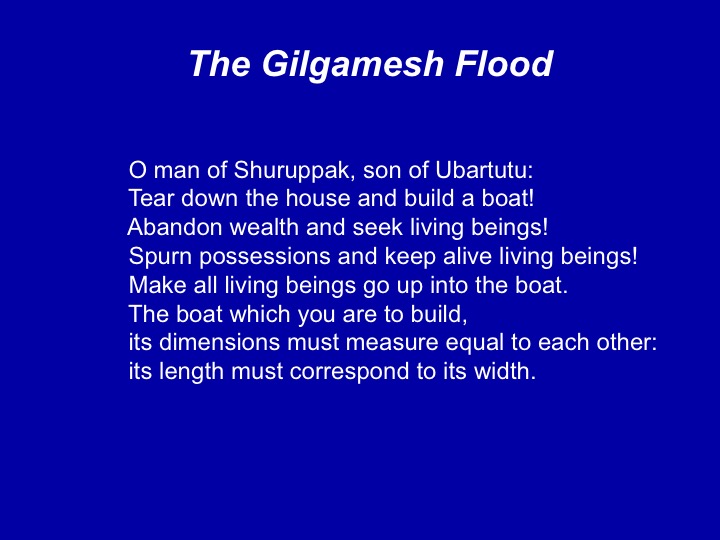 Here is the instructions Utnapishtim received from the god who told him to build a boat.

Note there is no mention of the materials – although later we learn that there were carpenters hired by Utanapishtim and bitumen was carried on board so we might assume that wood and pitch were some of the materials. There was also a mention of reed carriers – so possibly reeds were used. 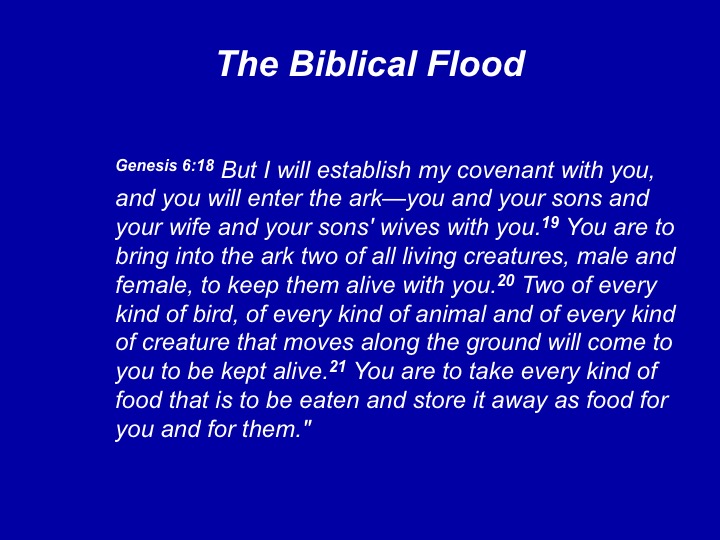 Then Noah was instructed by God as to what population was to be put on the boat. 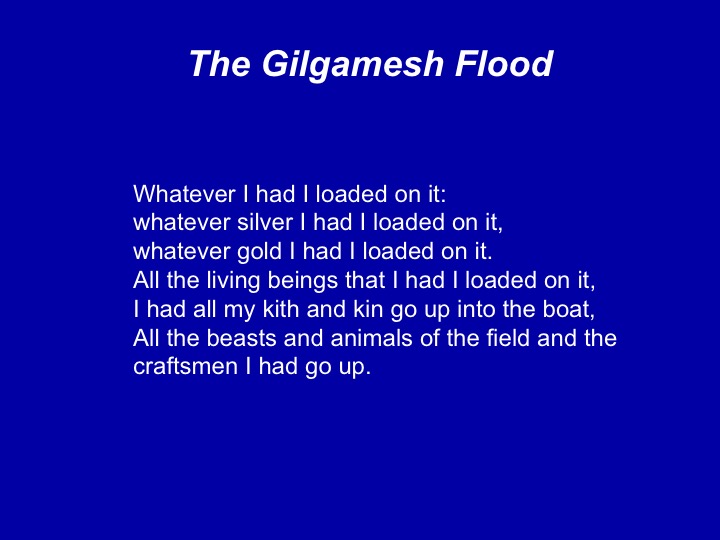 It appears that Utnaptishtim did load up people and animals onto the boat – after he loaded all the gold and silver that he could muster. 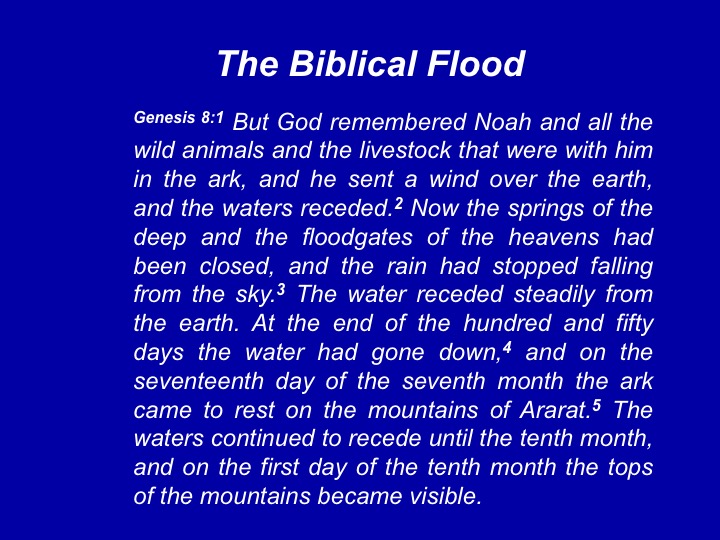 Then we come to the climax of the flood – the great moment when the rains finally stopped. 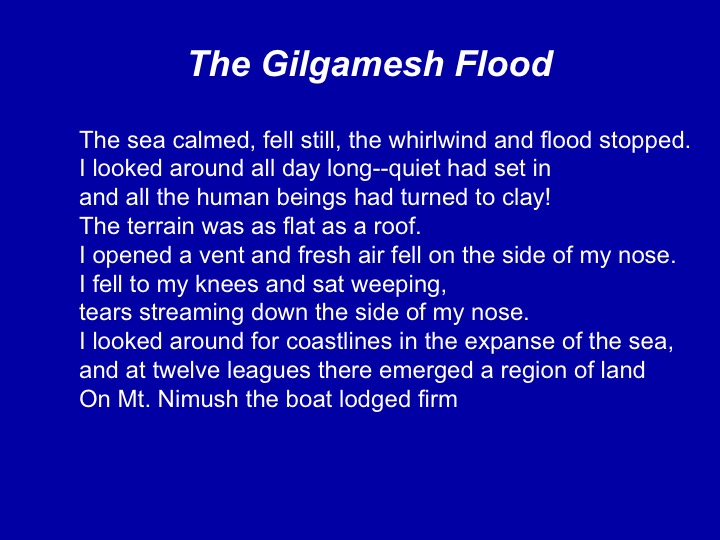 And Utnaptishtim’s version.  Not exactly the same thing. 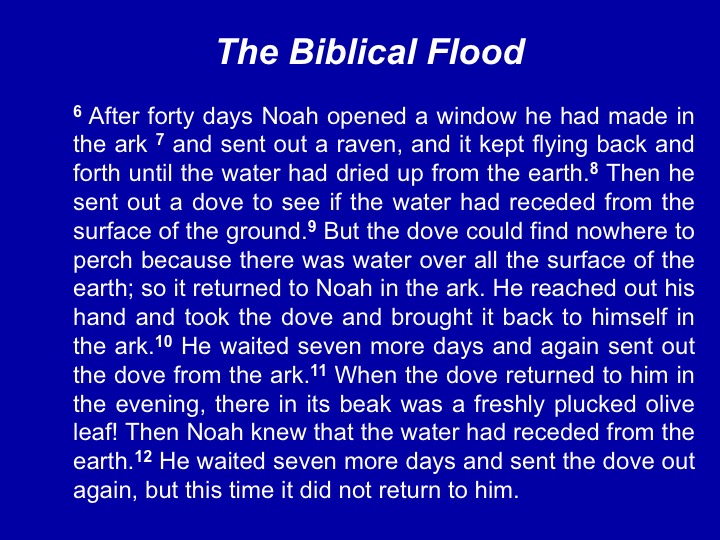 Now we see the critical episode of the birds. 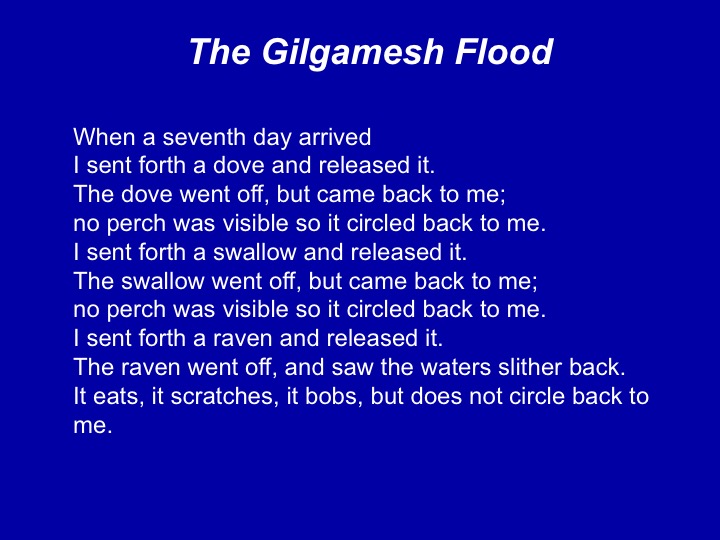 And the remarkably similar bird episode in Gilgamesh. 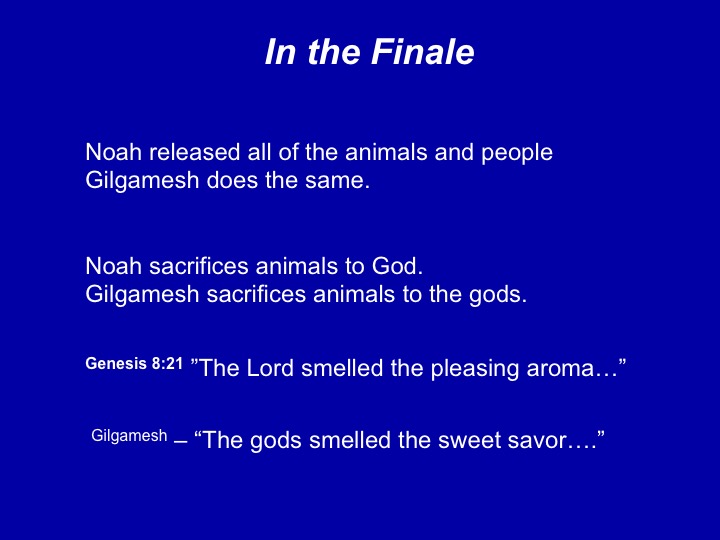 In these last instances we see some close parallels between the two accounts.

So what are we to make of this.  Well – you can make what you want of it.  There has been much speculation about this over the 20th century – with people trying to guess whether the Gilgamesh flood story was borrowed from an older Israelite tradition – or vice versa. Personally I don’t spend much time thinking about this. It seems pretty clear that Mesopotamia had a long history of severe flooding of the Tigris and Euphrates plain.  And there is archeological evidence of a particularly big one that dated all the way back to about 4000BC (before writing) that covered entire ancient cities in a deep layer of silt. And we know that whatever that tradition was it was a shared tradition because remember that the people of Israel were originally from Mesopotamia.  Remember that Abraham was born there and did not leave there until his 70th birthday and according to the genealogy in Genesis I believe Abraham was in the eleventh generation after Noah – so Noah was from Mesopotamia.  And the biblical account had the ark come to a rest on the mountains of Ararat in far northern Mesopotamia.

So this tradition was almost surely based on a long oral tradition that predated the writing of both the Epic of Gilgamesh and the biblical flood story. So it is simply impossible to figure out who borrowed from whom. So I just rely on my faith that I can trust the teachings of the Genesis story. 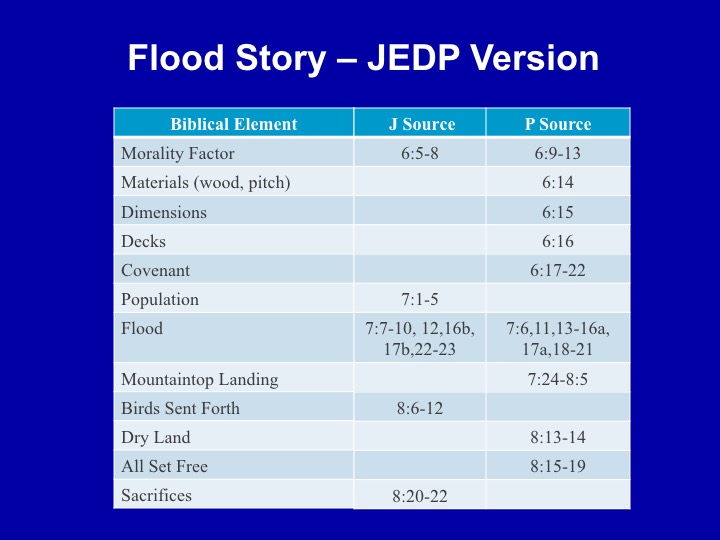 The JEDP adherents have had to put together an elaborate mixing of J and P sources  all through the flood story to correct what they perceived as too much repetition or too many contradictions. 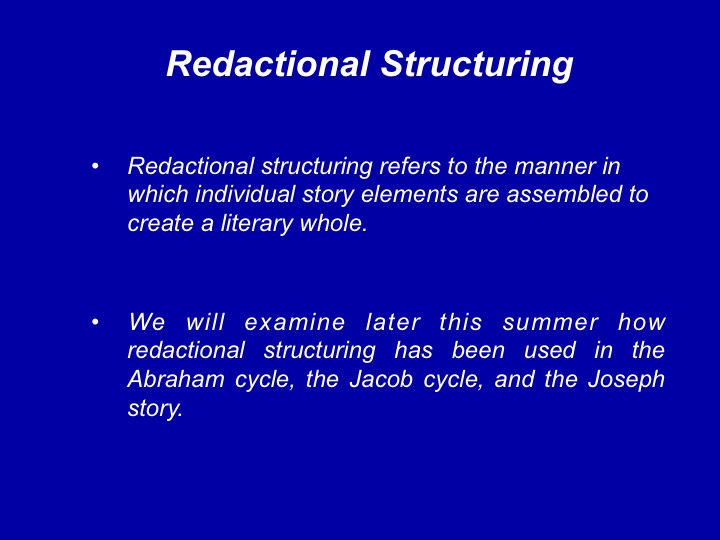 A new class of biblical scholars in the late 20th century have concentrated on the literary aspects of the Torah it is starting to pay off in terms of an increased understanding of the writing of these five works.  By examining some of the things we talked about last week in looking at the corpus of work discovered in the ancient near east these scholars have begun to see books like Genesis and Exodus in a completely new light and realize that most of the narratives have been written in a way that makes most sense when read as a literary whole rather than trying to break it into sections subdivided into J, E, and P material and then thrown together by a redactor.  These scholars have become the biggest critics of the documentary hypothesis.

What they have seen is that the entire literary structure of the Torah has motifs and themes that cross the boundaries of the various sources described by the documentary hypothesis.

But another one of the techniques they have come up with since about 1950 is redactional structuring: 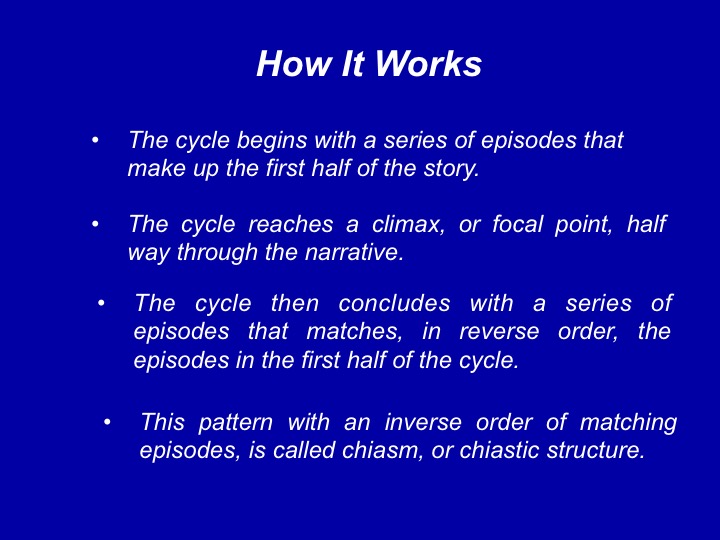 Chiastic structure (also called chiastic pattern or ring structure) is a literary device for chiasmus applied to narrative motifs, turns of phrase, or whole passages. Various structures of chiasmus are commonly seen in ancient literature to emphasize, parallel, or contrast concepts or ideas.

These often symmetrical patterns are commonly found in ancient literature such as the epic poetry of Odyssey and Iliad. Various chiastic structures are also seen in the Hebrew Bible and the New Testament, where biblical writers used chiasmus to give meaning to their writings or to highlight details of particular importance.

So - does the Flood story have a chiastic structure? Glad you asked. 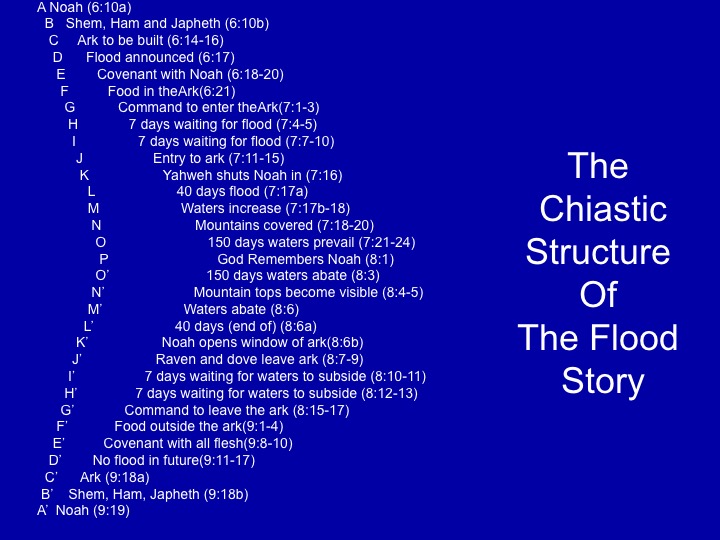 At P we have our focal point or climax. The flood has spent its fury and in Genesis 8:1 the text says: “But God remembered Noah and all the wild animals and the livestock that were with him in the ark, and He sent a wind over the earth, and the waters receded. 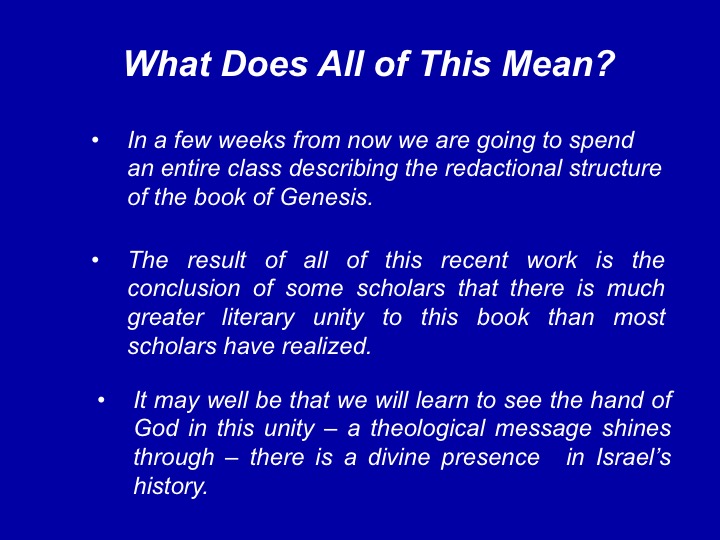 It may well be that we will learn to see the hand of God in this unity – a theological message shines through – there is a divine presence in Israel’s history. 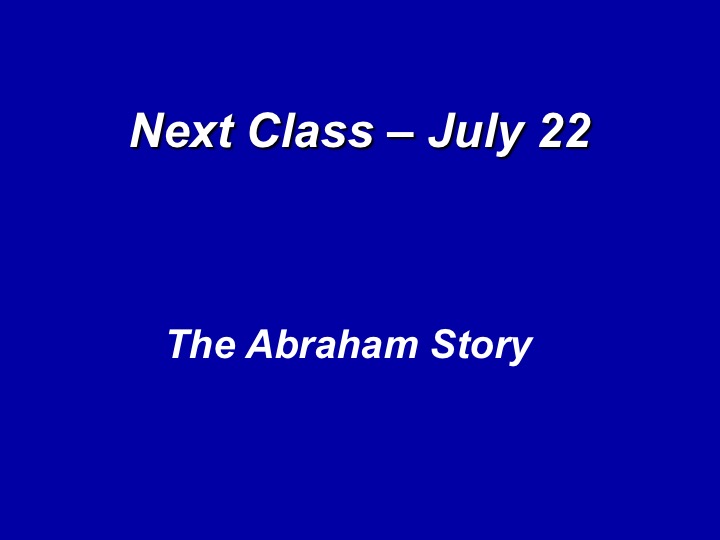 We will examine a literary masterpiece – the Abraham cycle.