History of Christianity Class 14
Corruption and Beginnings of Reform

Corruption and Beginnings of Reform

Throughout its history, Christianity has had the ability to generate reform  movements  based  on  the  conviction  that  its  high  ideals were being compromised by actual practice. Early monasticism, for example, can be seen as a form of organized resistance to what the monks perceived to be the compromised position of the church after Christianity became the imperial religion. And within the church, such popes as Gregory VII and Innocent III worked for the reform of the clergy and fought the practice of simony. Today however, we consider the sort of corruption those reforms could not touch: the deep and systemic dysfunction in late-medieval Christianity and the first efforts at structural, as distinct from moral, reform.

Christendom in the Middle Ages

Given the chaotic state of the West during the migration of nations in the 4th and 5th centuries, the medieval synthesis is remarkable both for its stability and its comprehensiveness.

If we mark the starting date for this synthesis as the coronation of Charlemagne in 800, Catholic culture shaped Europe for some 800 years.

This culture gathered a bewildering variety of warring tribes and diverse languages into a single coherent civilization from Poland to England, from Italy and Spain to Scandinavia.

Coherence was achieved not least by the use of a single language (Latin), a single creed, and a single religious authority (the pope).

For all the tensions and corruptions that it created, the political dance between pope and emperor (and, later, between pope and kings) provided a fundamental stability to society and mutual legitimation of both institutions.

The way of life in monasteries and cathedral chapters represented an ideal of human existence ordered to the worship of God, in which “the love of learning and the desire for God” were intricately connected.

Cathedrals and the arts employed within them provided a focus for a religious form of art that has had enduring value.

The development of universities, with their study of law and theology, united the life of faith and the use of reason in a critical synthesis.

There is, finally, no question that Christianity during this period provided the setting and stimulus for men and women of great sanctity. The religious fervor involved in the Crusades, pilgrimages, monastic vows, mendicant wanderings, mystical prayer, and so on may not always have been pure but was nevertheless largely genuine and astonishingly widespread.

Still, by the 14th century, it was becoming clear that the medieval synthesis was badly in need of correction, not because of minor faults or problems but because of major and structural issues.

The Scholastic theology that developed in the cathedral and monastic schools and in the universities quickly became “scholastic” in the negative sense; it was more philosophical and academic—removed from the life of faith.

Theology used Scripture as a repository of proof  texts more than as a set of compositions that could challenge or energize thinking.

Doctrinal attention, in turn, both reflected and affected shifts in  piety.  For some, the divinity of Christ  was  so  greatly emphasized as to deemphasize his humanity, and the honor shown Mary threatened to displace the worship of Christ.

Worship emphasis had gradually shifted.  To some critics, the divinity of Christ  was  so  greatly emphasized as to deemphasize his humanity, and the honor shown Mary threatened to displace the worship of Christ.

And in the liturgy, worship in the cathedrals was more a matter of performance by the clergy than of participation of the faithful, carried out in a language (Latin) that was increasingly unknown to any but the learned clergy.

Eucharistic controversies stressing the “real presence” led to the “adoration” of the host more than the eating of a meal.

“Sacramentals” increasingly displaced the sacraments as the focus of Catholic piety: devotion to the saints, collection of relics, pilgrimages, and the winning and selling of indulgences.

The life of piety could be regarded more as a set of practices designed to avoid eternal punishment in hell or the terrors of purgatory, rather than an expression of a living and loving relationship with the resurrected Christ.

In the political realm, the long involvement of the church in the affairs of state—supported by the Donation of Constantine—had the paradoxical effect of actually lessening its spiritual authority, making it appear (as it often actually was) as one power broker among others, rather than the representative of a “rule of God” that transcended human authorities.

The hierarchical structure of Catholicism itself seemed badly in need of reform. It established, in effect, a caste system, with ignorant laity completely disenfranchised, ignorant local clergy only slightly more powerful, and then (in ascending order of prestige, power, and wealth), monks, mendicants, bishops, cardinals, and the pope.

Predictably, corruption in the system involved sex, money, and power.

The centralized power of the papacy, once so important in forging the medieval synthesis, appeared increasingly to be a problem more than a solution, especially when its claims, as with Boniface VIII, stretched credulity. In the years of the Avignon papacy and the Great Schism, the moral authority of the papacy was greatly reduced.

These two pioneers were just as strong in the condemnation of corruption in the church, the monasteries, and the papacy as were the 16th century reformers.

It is possible that they were able to get away with their written condemnations for so long because most of their criticism was happening in the middle of the Black Death, when half of the population of western Europe was dying. The church was slightly preoccupied to say the least. 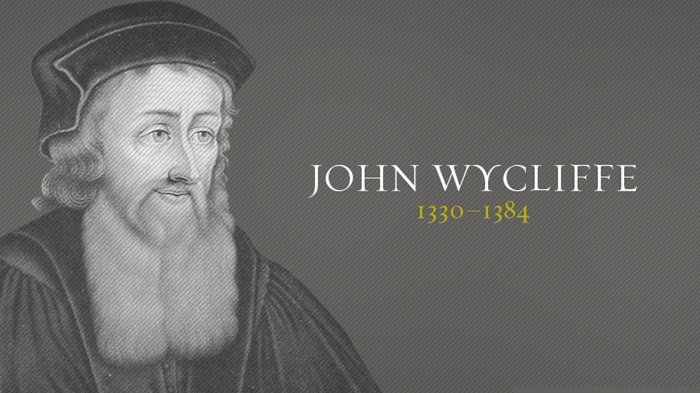 John Wycliffe (1330–1384) was one of the most important forerunners to the Reformation of the 16th century. He was a philosopher and theologian whose life was centered in the environs of Oxford. His radical teachings eventually lost him support at the university, and his teachings were condemned by the Council of Constance in 1415; nevertheless,  he  had  enormous influence on later reformers.

The Black death reached England in the summer of 1348. From his frequent references to it in later life, it appears to have made a deep and abiding impression upon him. His friends reported that he had very gloomy views regarding the prospects for the human race.

Wycliffe's studies led him to the opinion that the close of the 14th century would mark the end of the world. While other writers viewed the plague as God's judgment on a sinful people, Wycliffe saw it as an indictment of an unworthy clergy. The mortality rate among the clergy had been particularly high, and those who replaced them were, in his opinion, uneducated or generally disreputable.

He argued that the church had fallen into sin. He then further argued that because of this sin there should be a royal divestment of all church property and that all of the clergy should live in complete poverty.

In May of 1377 a first official condemnation of Wycliffe was issued by Pope Gregory XI. But by this time a number of wealthy nobles began to support Wycliffe's views in England and began to defend him, making it difficult for the Archbishop of Canterbury to move strongly against him.

Pope Gregory died in 1378 and this apparently emboldened Wyclif, who started to double down on his treatises.

Wycliffe had come to regard the scriptures as the only reliable guide to the truth about God, and maintained that all Christians should rely on the Bible rather than on the teachings of popes and clerics. He said that there was no scriptural justification for the papacy.

In 1379 he wrote more treatises rejecting the concept of purgatory, disapproving of clerical celibacy, pilgrimages,  the selling of indulgences, and praying to the saints.

And at this time he formulated one of the two major formal principles of the later Reformation of the 16th century, the unique authority if the Bible for the belief and life of the Christian.

Wycliffe issued a blistering attack then on monasticism. Arguing that monks were the pests of society, enemies of religion, and promoters of every crime. Wycliffe argued for nothing less than the extinction of monasticism and closing of all the monasteries.

John Wycliffe – and the English Bible

Wycliffe's Bible is the name now given to a group of Bible translations into Middle English that were made under the direction of John Wycliffe. They appeared over a period from approximately 1382 to 1395.These Bible translations were the chief inspiration and chief cause of the Lollard movement, a pre-Reformation movement that rejected many of the distinctive teachings of the Roman Catholic Church.

In the early Middle Ages, most Western Christian people encountered the Bible only in the form of oral versions of scriptures, verses and homilies chanted in Latin.

Although unauthorized, the work was popular. Wycliffe Bible texts are the most common manuscript literature in Middle English. More than 250 manuscripts of the Wycliffe Bible survive. One copy sold at auction on 5 December 2016 for $1,692,500 USD.

Wycliffe died of a stroke in 1384 while he was conducting a mass at his local church.

The church was still determined to get him. In 1415 they assembled the Council of Constance excommunicating him retroactively.

In a major public ceremony Wycliffe's corpse was exhumed and burned and the ashes cast into the River Swift.

After the death of Wycliffe his followers actually grew in numbers and became a significant irritant to the Church of England in particular.

The Lollards continued to insist that the Bible should be read in English, not Latin. And they also supported many of Wycliffe’s other criticism’s of the church.

The Lollards were declared heretics, and many were arrested and executed in the 15th century, but many of the Lollards went underground and were eventually absorbed into the later English Reformation. 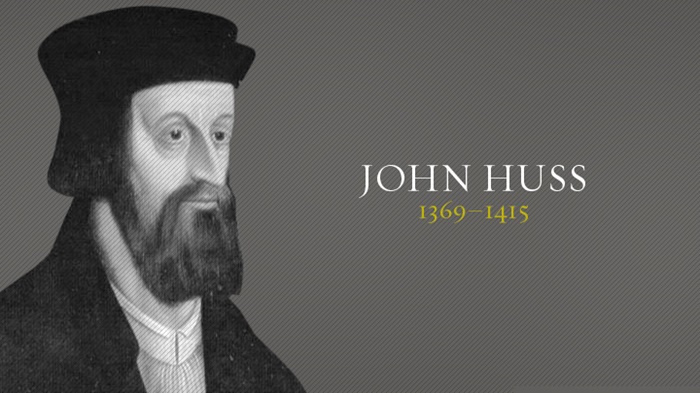 John Huss (Jan Hus, c. 1372–1415) was born of a Czech peasant family in Bohemia, was ordained a priest, and became dean of the philosophical faculty at the University of Prague, as well as a popular preacher.

Huss became aware of Wyclif’s works, especially his political doctrines concerning the elimination of private property and hierarchy within society, and his teaching on the spiritual as opposed to the material church.

His violent sermons on the immorality of the clergy stimulated resistance, and under Innocent VII, Huss was forbidden to preach in 1407. When the Czech state took over the University of Prague and made Huss rector, papal resistance was even greater. Huss was excommunicated in 1411, and his followers were interdicted.

After writing his On the Church (substantially borrowed from Wycliffe), Huss was granted safe passage to the Council of Constance, but on his arrival, he was arrested, imprisoned, condemned, and burned at the stake in 1415.

The deceitful trick by the church to lure Huss to his arrest and execution caused widespread disturbances in Czech lands. It was widely viewed as a criminal act. A new movement (Hussism) organized between 1415-1419, and was supported by many of the noble families.

The Hussites, although split into several variants, continued their presence in Czech lands all the way into the 16th century Reformation. They gradually merged into the other reform churches (Lutheran, Calvinist, etc).

Czech protestants suffered severe setbacks later at the Battle of White Mountain during the Thirty Years War, in which the Catholic armies decisively beat a Protestant army, leading to eventual Catholic domination in Czech lands.

Theses early reformers of the 13th and 14th centuries, including many others less well known, were important in what later became know as the Protestant Reformation that stretched from 1517 – 1648.

It has been well documented from their writings that they anticipated essentially all of the needed reforms later demanded by the later reformers (Luther, Zwingli, Calvin).

In fact Luther, Zwingli, and Calvin all acknowledged the contribution these earlier reformers made to their thinking.

Next Week will be our final wrap-up of our saga of the early history of the church.

History of Christianity Class 14            Corruption and Beginnings of Reform