1 On the eighth day, Moses called for Aaron, Aaron’s sons, and Israel’s elders. 2 He said to Aaron, “Take a young bull from the herd as a purification offering and a ram as an entirely burned offering, both flawless animals, and bring them before the Lord. 3 Then tell the Israelites, ‘Take a male goat as a purification offering; a young bull and a sheep—both one-year-old flawless animals—as an entirely burned offering; 4 an ox and a ram as a well-being sacrifice before the Lord; and a grain offering mixed with oil, because today the Lord will appear to you.’”

5 They brought what Moses had commanded to the front of the meeting tent. Then the whole community came forward and stood before the Lord. 6 Moses said, “The Lord has ordered you to do this so that the Lord’s glorious presence will appear to you.” 7 Moses said to Aaron, “Come up to the altar and perform your purification offering and your entirely burned offering, making reconciliation for yourself and the people. Then perform the people’s offering in order to make reconciliation for them, just as the Lord commanded.”

8 Aaron went to the altar and slaughtered the young bull for his purification offering. 9 Then Aaron’s sons presented the blood to him, and he dipped his finger into the blood and put it on the altar’s horns. He poured the rest of the blood out at the altar’s base. 10 He completely burned on the altar the fat, kidneys, and lobe of the liver from the purification offering, just as the Lord commanded Moses. 11 But he burned the flesh and hide with fire outside the camp.

18 Aaron then slaughtered the ox and the ram—the people’s communal sacrifice of well-being. Aaron’s sons handed him the blood, which he tossed against all sides of the altar,19 and the fat pieces of the ox and ram—the fat tail, the covering fat, the kidneys, and the lobe of the liver. 20 They placed these fat pieces on the animals’ breasts, and Aaron completely burned them on the altar. 21 But Aaron lifted up the breasts and the right thigh as an uplifted offering before the Lord, just as Moses had commanded.

22 Aaron then raised his hands toward the people and blessed them. After performing the purification offering, the entirely burned offering, and the well-being sacrifice, he came down. 23 Moses and Aaron then entered the meeting tent. When they came out, they blessed the people, and the Lord’s glorious presence appeared to all the people. 24 Fire flew out from before the Lord and devoured the entirely burned offering and the fat pieces on the altar. All the people saw it. They shouted for joy and fell facedown. 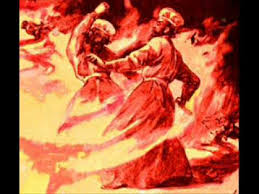 1 Now Nadab and Abihu, two of Aaron’s sons, each took an incense pan. They put fire and incense on them and offered unauthorized fire before the Lord, which he had not commanded them. 2 Then fire flew out from before the Lord and devoured them, and they died before the Lord.

3 Moses said to Aaron, “When the Lord said, ‘I will show that I am holy among those near me, and before all the people I will manifest my glorious presence,’ this is what he meant!” But Aaron was silent.

4 Then Moses called Mishael and Elzaphan the sons of Uzziel, Aaron’s uncle, and told them, “Go carry your relatives out from the front of the sanctuary to a place outside the camp.” 5 So they went forward and carried Nadab and Abihu out by their tunics to a place outside the camp, just as Moses had ordered. 6 Moses then said to Aaron and his sons, Eleazar and Ithamar, “Don’t dishevel your hair and don’t rip your clothes into pieces, or you will die and bring anger upon the whole community. Your family—all of Israel’s house—will mourn the burning the Lord has done. 7 But you must not leave the meeting tent, or you will die because the Lord’s anointing oil is on you.” So they did what Moses ordered. 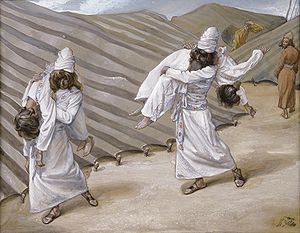 8 The Lord said to Aaron: 9 Both you and your sons must not drink wine or beer when you enter the meeting tent so that you don’t die—this is a permanent rule throughout your future generations— 10 so that you can distinguish between the holy and the common, and between the unclean and the clean, 11 and so that you can teach the Israelites all the rules that the Lord spoke to them through Moses.

12 Moses then told Aaron and his remaining sons, Eleazar and Ithamar, “Take the grain offering that is left over from the Lord’s food gifts and eat it unleavened next to the altar, because it is most holy. 13 You must eat it in a holy place because it is your portion and your sons’ portion from the Lord’s food gifts, as I have been commanded. 14 You must eat the breast for the uplifted offering and the thigh for the gift offering in a clean place—both you and your sons and daughters. These things are designated as your portion and your children’s portion from the Israelites’ communal sacrifices of well-being. 15 The Israelites must bring the thigh for the gift and the breast for the uplifted offering along with the food gifts of the fat pieces, to be lifted up as an uplifted offering before the Lord. These will belong to both you and your children as a permanent portion, just as the Lord has commanded.”

16 Then Moses asked about the male goat for the purification offering, and discovered that it had already been burned. He was angry with Eleazar and Ithamar, Aaron’s remaining sons, and asked, 17 “Why didn’t you eat the purification offering in the holy area? It’s most holy, and it was assigned to you for bearing the community’s punishment by making reconciliation for them before the Lord. 18 Since its blood wasn’t brought into the sanctuary’s interior, you were to have eaten it in the sanctuary, just as I was commanded.”

41 Every creature that swarms on the earth is detestable; it must not be eaten. 42 Among all such creatures that swarm on the earth, you must not eat anything that moves on its belly or anything that walks on four or more feet because they are detestable. 43 Do not make yourselves detestable by means of any swarming creatures. Do not make yourselves unclean with them or be made unclean by them. 44 I am the Lord your God. You must keep yourselves holy and be holy, because I am holy. You must not make yourselves unclean by any swarming creature that crawls on the ground. 45 I am the Lord, who brought you up from the land of Egypt to be your God. You must be holy, because I am holy.

46 This concludes the Instruction concerning animals, birds, all creatures that live in water, and all the creatures that swarm on the earth, 47 in order to distinguish between the unclean and the clean and between creatures that can be eaten and those that cannot.