The Whole Text of Genesis
What did we learn? 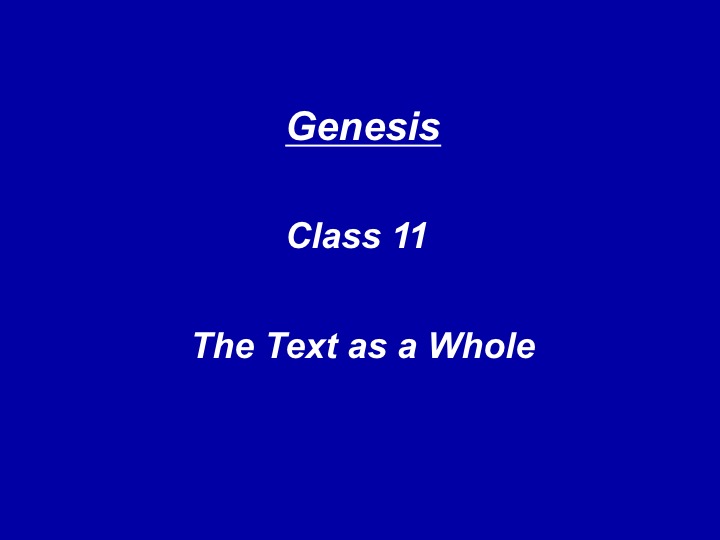 So - what have we learned from looking at Genesis through a different lens - the lens of studying the whole text as literature?  I would submit that we have learned a great deal. In this last class I will try to point out some of those things. Before that we will look at one last chapter in the Joseph story in detail. And then widen our vision a bit and survey the story as it continues beyond the book of Genesis - all the way through the book of Joshua. 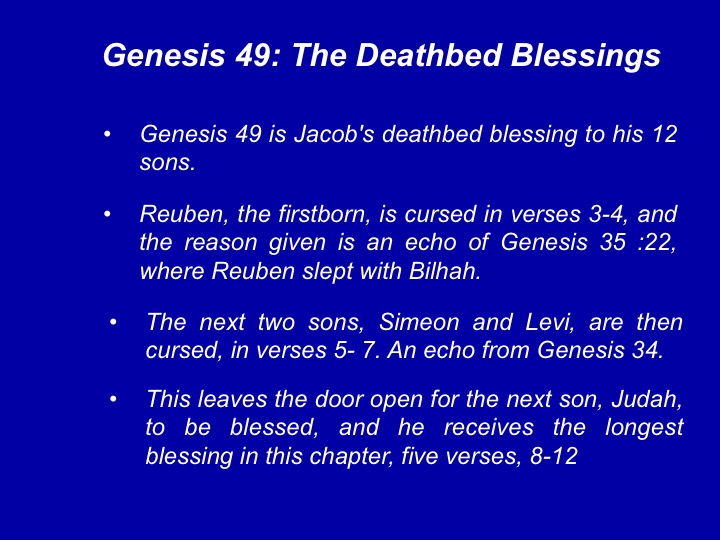 I. Genesis 49 is Jacob's deathbed blessing to his 12 sons. Much of what we have been discussing in the latter part of our course comes to the fore here.

A. Reuben, the firstborn, is cursed in verses 3-4, and the reason given is an echo of Genesis 35 :22, where Reuben slept with Bilhah. Compare the story of Phoenix, the tutor of Achilles, in Iliad, Book 9, where we learn that he attempted to sleep with his father's concubine, after which his father cursed him. This is another instance of a shared literary motif in the ancient world, harking back to our earlier lecture on the need to have broad horizons, using material not only from Israel's near neighbors, such as Egypt and Babylonia, but from farther places as well, including Greece.

B. The next two sons, Simeon and Levi, also are cursed, in verses 5- 7. This relates to a story that we did not read in our course, Genesis 34, where these sons sacked the city of Shechem and killed all the men of the city as revenge for the prince of that city, who has the same name, Shechem, violating their sister Dinah.

C. This leaves the door open for the next son, Judah, to be blessed, and indeed, as we have mentioned, he receives the longest blessing in this chapter, five verses, 8-12 (along with Joseph's, also five verses, 22-26).

1. Verse 8: "your brothers shall praise you"-"your father's sons shall bow down to you."

2. Verse 9: Judah is compared to a lion, the most kingly of beasts (compare others: lssachar, donkey; Naphtali, deer; Benjamin, wolf).

3. Verse 10: "the scepter shall not depart from Judah, nor the ruler's staff from between his legs; so that tribute shall come to him, and the homage of peoples shall be his"-royal language.

D. Yet these same words about Judah can be read in another tone altogether, with the opposite meaning present-a chastisement of Judah, the author's reprimand for what he did in Genesis 37-38- one final scolding.

In verse 9, the words "on prey, my son, you have gone up" also can be read as "on the prey of my son you have gone up"-using the same lexical root for "prey" as occurred in Genesis 37, when Jacob said that his son must have been "torn" by a wild beast. In Genesis 37:33, the verb is taro! toreif, and here, in Genesis 49:9, the noun is teref, meaning "prey."

In verse 10, we read, "the scepter shall not depart from Judah, nor the ruler's staff from between his legs," but this is exactly what occurred in Genesis 38, where Judah gave up his staff to Tamar' Note further that the expression "between his legs" always carries a sexual innuendo.

The words in verse 10 "so that tribute shall come to him" also can be read as "until Shelah comes," with reference to Genesis 38 once more.

So Judah is both glorified, as with his great speech in Genesis 44 that brings Joseph to reveal himself to his brothers, and chastised. 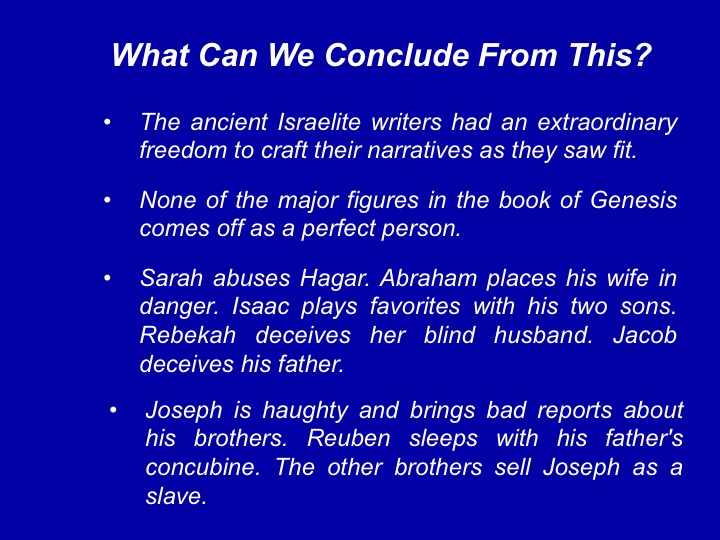 We have to conclude that the ancient Israelite writers had an extraordinary freedom to craft their narratives as they saw fit: lauding the heroes with effusive praise when needed and desired and rebuking those same individuals when censure and condemnation were required.

None of the major figures in the book of Genesis comes off as a perfect person; not Abraham, Sarah, Isaac, Rebekah, Jacob, Rachel, or others.

Sarah abuses Hagar. Abraham places his wife in danger-not once, but twice-and lies to (or at least misleads) Abimelech. Isaac plays favorites with his two sons. Rebekah deceives her blind husband. Jacob deceives his father. Rachel steals her father's terafim-Laban's household idolsand then deceives him (Genesis 31).

Joseph is haughty and brings bad reports about his brothers.

Reuben sleeps with his father's concubine. The other brothers sell Joseph as a slave. Judah refuses to uphold the law of levirate marriage. 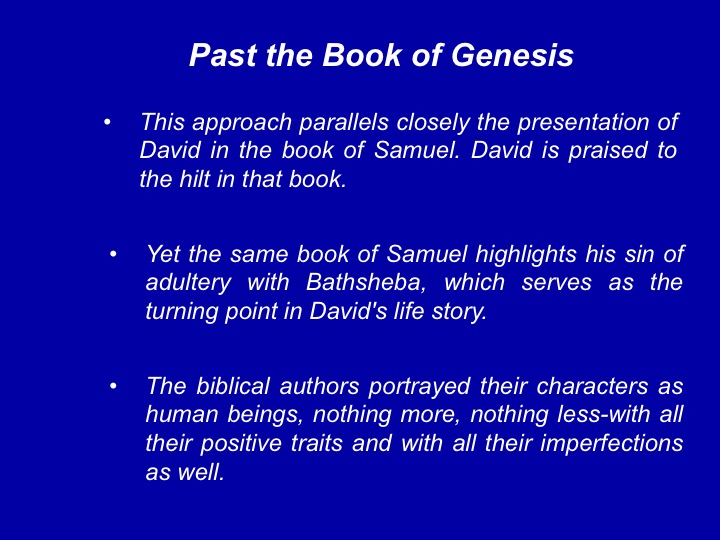 Furthermore, if these stories are a reflection of the events and personalities of the 10th century, as we have argued in this course, then presumably, many of these matters reflect on King David, the beloved great king of Israel.

This parallels closely the presentation of David in the book of Samuel. David is praised to the hilt in that book, and in later biblical and post-biblical tradition, his status is elevated even more among both Jews and Christians.

Yet the same book of Samuel highlights his sin of adultery with Bathsheba, and not in a single verse but in a superbly crafted narrative that comprises two entire chapters, 2 Samuel 11-12, which serves as the turning point in David's life story.

The biblical authors portrayed their characters as human beings, nothing more, nothing less-with all their positive traits and with all their imperfections as well. This is what makes the Bible so engaging. 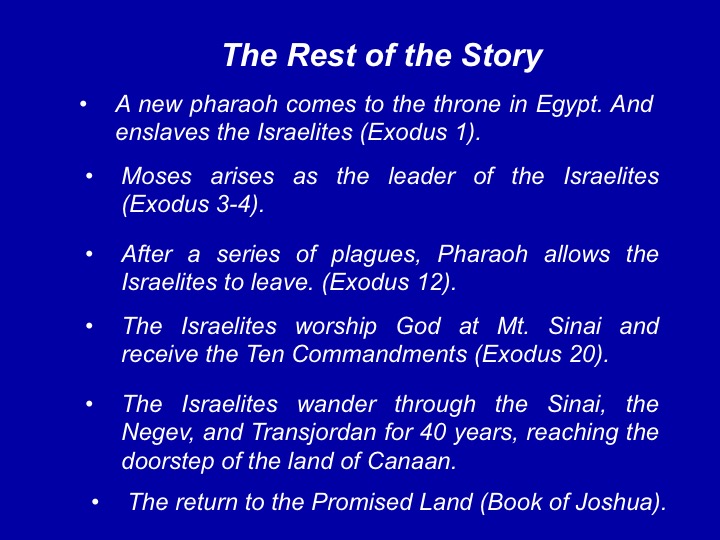 We briefly summarize the story of the book of Exodus and the remainder of the Torah.

A new pharaoh comes to the throne in Egypt, and this new king most likely Pharaoh Rameses II of the 19th Dynasty in the 13th century B.C.E.-enslaves the Israelites (Exodus 1).

Moses arises as the leader of the Israelites (Exodus 3-4).

After a series of plagues, Pharaoh allows the Israelites to leave the event that is known as the Exodus (Exodus 12).

The Israelites worship God at Mt. Sinai and receive the Ten Commandments (Exodus 20).

The Israelites wander through the Sinai, the Negev, and Transjordan for 40 years, reaching the doorstep of the land of Canaan (see especially the book of Numbers).

Moses dies (Deuteronomy 34), as leadership is transferred to Joshua, who will lead the Israelites into the Promised Land (described in the book of Joshua).

This story is a microcosm of the much larger narrative of the people of Israel, from the book of Exodus through the book of Joshua.

We can well imagine that an Israelite reading this short story in Genesis 12:10-13:4 could see the national destiny of Israel reflected in this short snippet of literature. 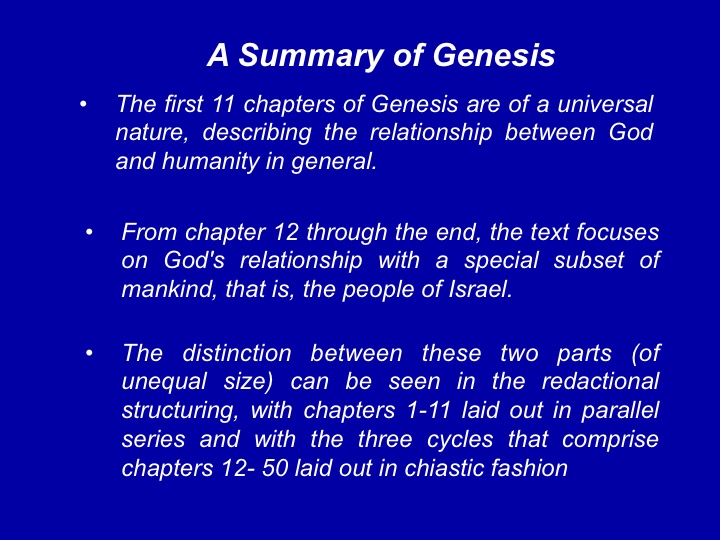 We come to the summary of our course, extending from the two creation stories in Genesis 1-2 through the story of Joseph in Genesis 37-50.

The first 11 chapters of Genesis are of a universal nature, describing the relationship between God and humanity in general.

From chapter 12 through the end, the text focuses on God's relationship with a special subset of mankind, that is, the people of Israel.

The distinction between these two parts (of unequal size) can be seen in the redactional structuring, with chapters 1-11 laid out in parallel series and with the three cycles that comprise chapters 12- 50 laid out in chiastic fashion (see Lecture Fifteen). 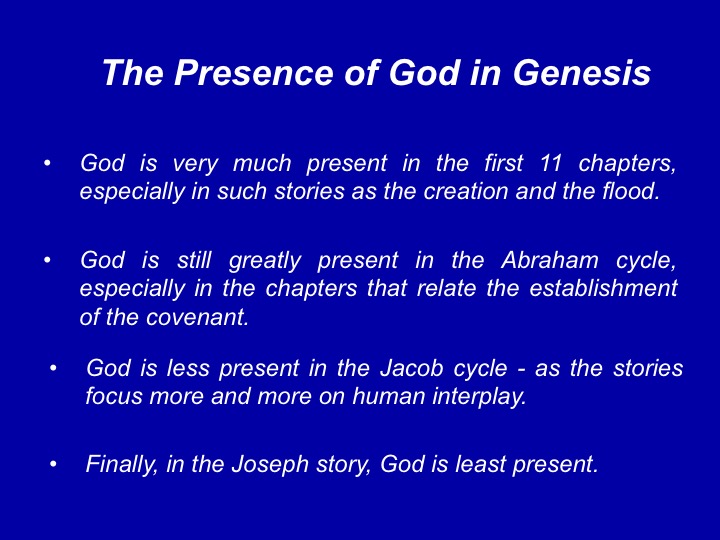 One point not noted until now is this: The presence of God recedes as one progresses through the book of Genesis.

God is very much present in the first 11 chapters, especially in such stories as the creation and the flood.

God is still greatly present in the Abraham cycle, especially in the chapters that relate the establishment of the covenant (15 and 17). And, of course, Abraham represents the man of supreme faith in God.

God is less present in the Jacob cycle-as the stories focus more and more on human interplay (witness Laban, not God, as the one who punished Jacob for his deception ofIsaac). In addition, Jacob is a man of less faith than Abraham; note his vow in 28:20-22: Only if God does all these things for Jacob (providing for him, bringing him back to Canaan, and so on), only then, will Jacob worship God.

Finally, in the Joseph story, God is least present. He never speaks to Joseph in the entire lengthy narrative. The only time that God speaks in these chapters is to Jacob in 46:2-4. 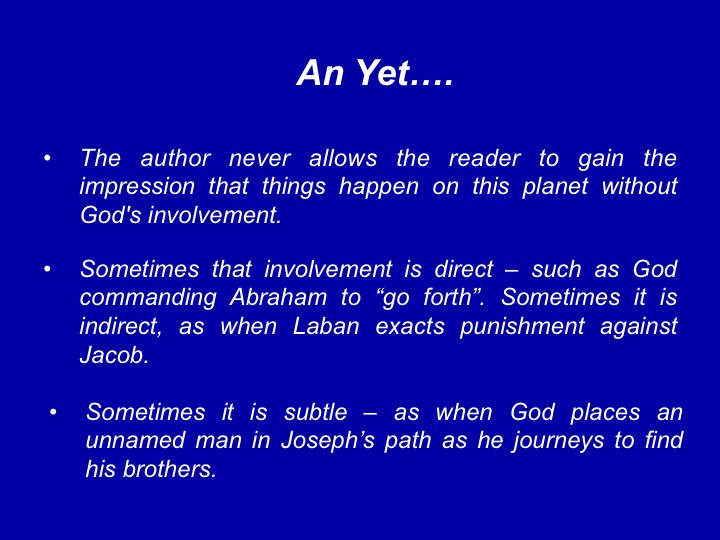 Yet the diminution of God's direct presence in the narrative does not mean that we are supposed to see his removal from the scene.

1. Quite the contrary, for whether God is directly present or "out of sight" temporarily, the author never allows the reader to gain the impression that things happen on this planet without God's involvement.

God's involvement may be very direct, as when Onan is immediately punished by death for spilling his seed on the ground; or it may be indirect, as when Laban playfully exacts punishment against Jacob or when Tamar gains the moral upper hand against Judah. 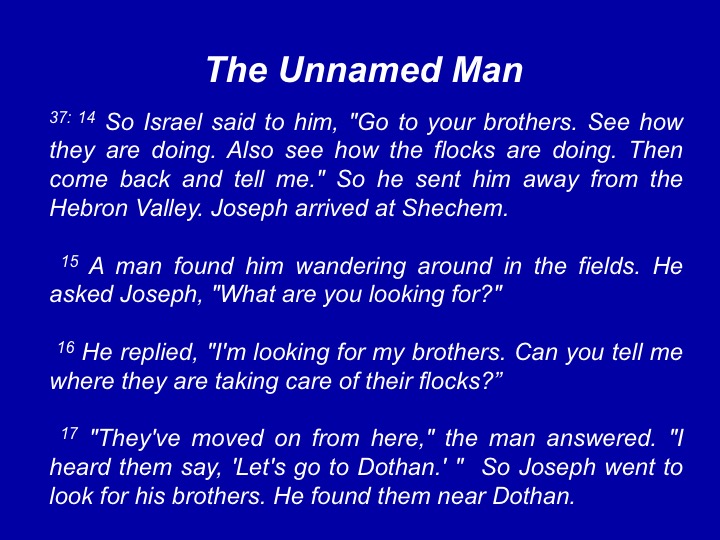 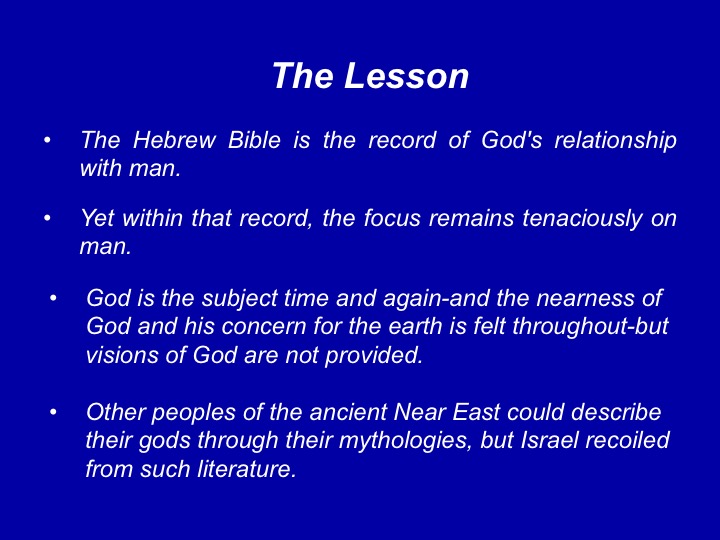 This, perhaps, is the greatest lesson that we should learn from our course. The Bible is the record of God's relationship with man, especially the people of Israel, as understood by one subset of mankind, namely, again, the nation of Israel.

A. Yet within that record, the focus remains tenaciously on man. We get very few glimpses of God in the Bible, and none, I would submit, in the book of Genesis, not even in the creation stories. God is described in only very limited ways.

God is the subject time and again-and the nearness of God and his concern for the earth is felt throughout-but actual pictures and visions of God are not provided.

Only occasionally in the Bible does the camera take us to heaven, as it were, to see God-as it does in Job 1-2 and in several passages in the book of Ezekiel. Both of those, incidentally, are later books, from the 6th century, during the Exilic Period. Long after Genesis was written.

Other peoples of the ancient Near East almost always describe their gods through the mythologies of those gods, and their quarrels and wars with each other - often in some kind of heaven.  And always in poetry. There is little emphasis on man.

Israel recoiled from such literature. Genesis is prose, it is narrative. And it is relentlessly focused on man. 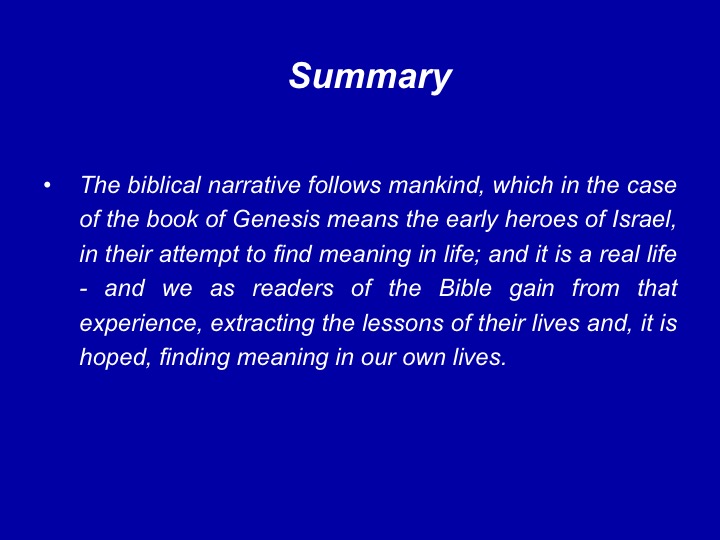 The biblical narrative follows mankind, which in the case of the book of Genesis means the early heroes of Israel, in their attempt to find meaning in life; and those are real lives, with real problems. And we as readers of the Bible gain from that experience, extracting the lessons of their lives and, it is hoped, finding meaning in our own lives. 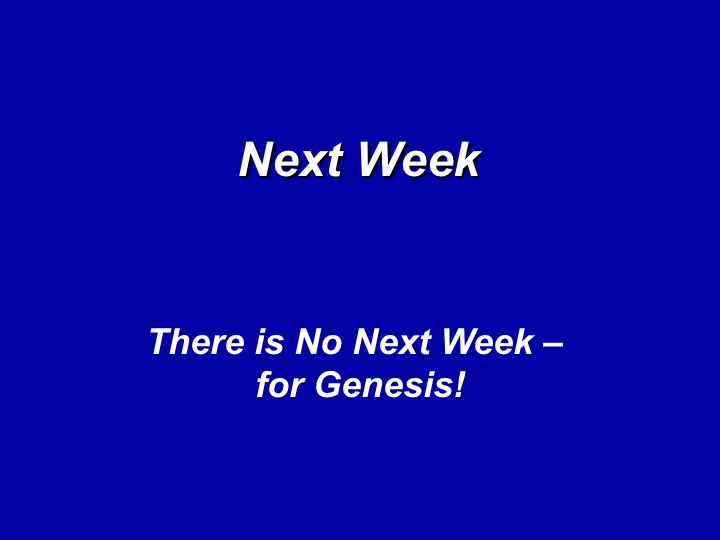 The Whole Text of Genesis      What did we learn?