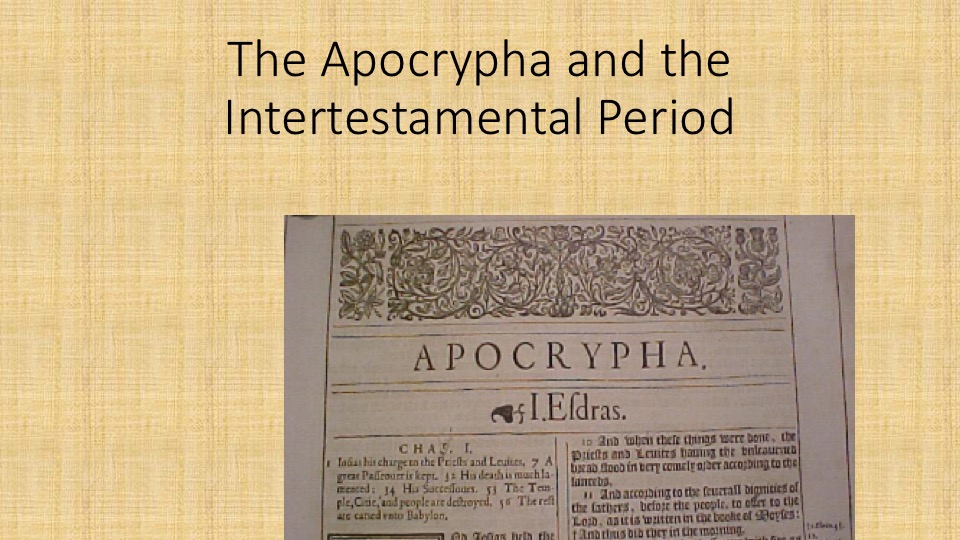 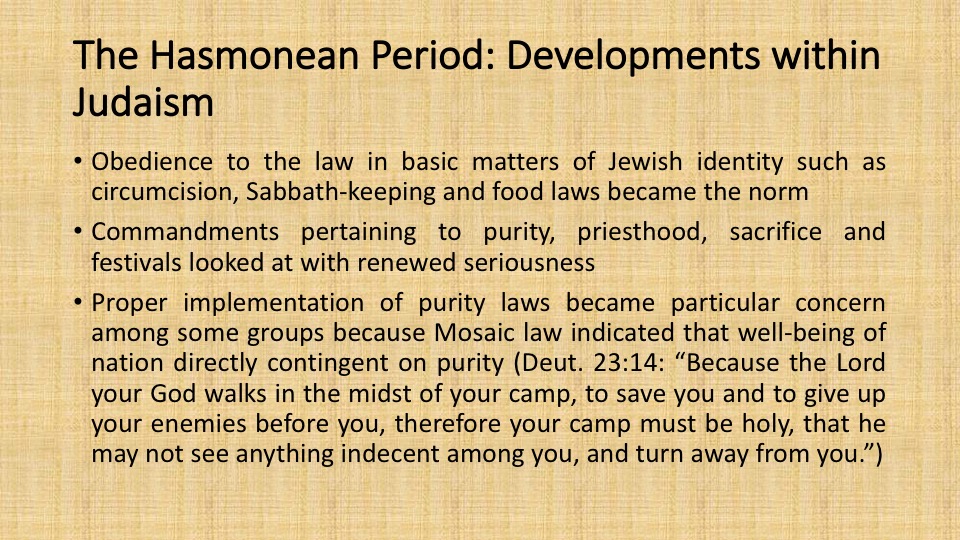 The Hasmonean Period: Developments within Judaism

Obedience to the law in basic matters of Jewish identity such as circumcision, Sabbath-keeping and food laws became the norm

Commandments pertaining to purity, priesthood, sacrifice and festivals looked at with renewed seriousness

Proper implementation of purity laws became particular concern among some groups because Mosaic law indicated that well-being of nation directly contingent on purity (Deut. 23:14: “Because the Lord your God walks in the midst of your camp, to save you and to give up your enemies before you, therefore your camp must be holy, that he may not see anything indecent among you, and turn away from you.”) 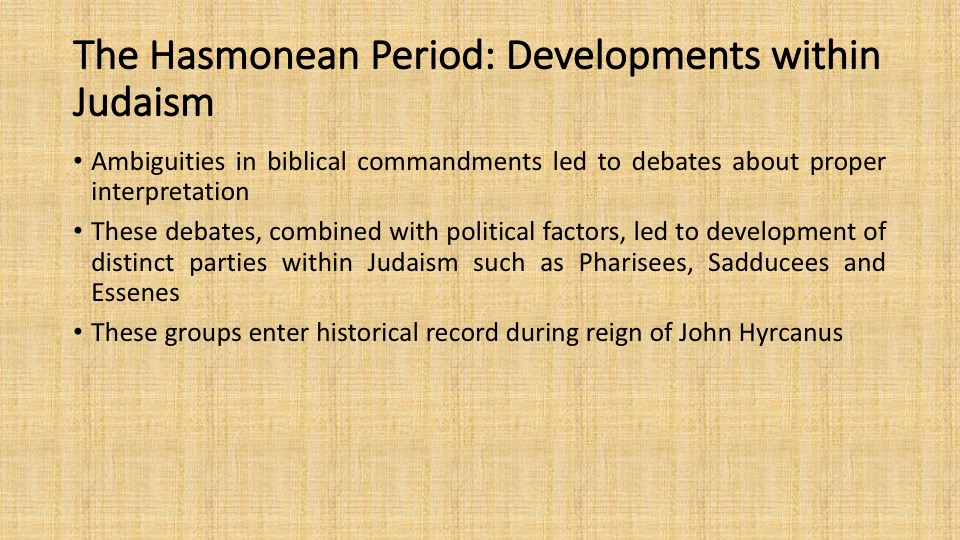 The Hasmonean Period: Developments within Judaism

Ambiguities in biblical commandments led to debates about proper interpretation.

These debates, combined with political factors, led to development of distinct parties within Judaism such as Pharisees, Sadducees and Essenes.

These groups enter historical record during reign of John Hyrcanus. 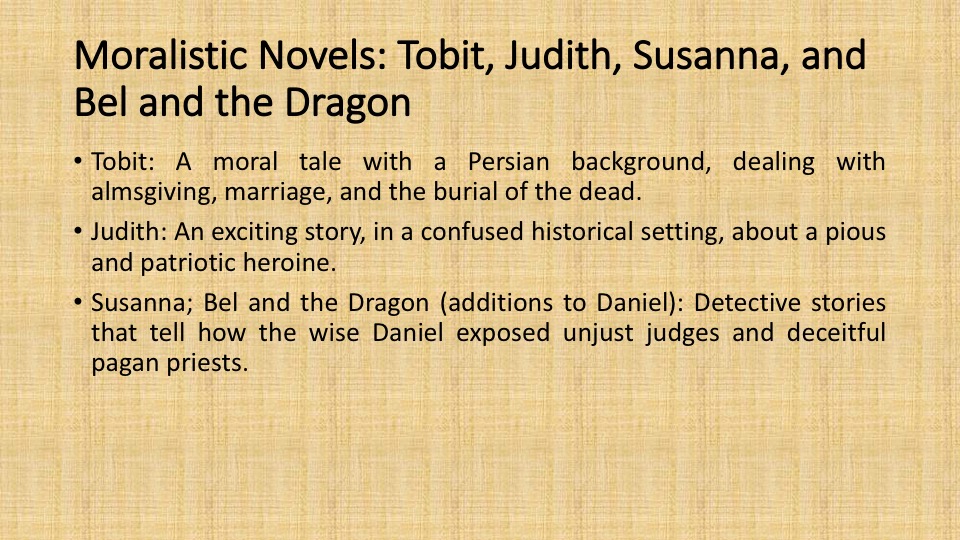 Moralistic Novels: Tobit, Judith, Susanna, and Bel and the Dragon

Tobit: A moral tale with a Persian background, dealing with almsgiving, marriage, and the burial of the dead.

Judith: An exciting story, in a confused historical setting, about a pious and patriotic heroine.

Susanna; Bel and the Dragon (additions to Daniel): Detective stories that tell how the wise Daniel exposed unjust judges and deceitful pagan priests. 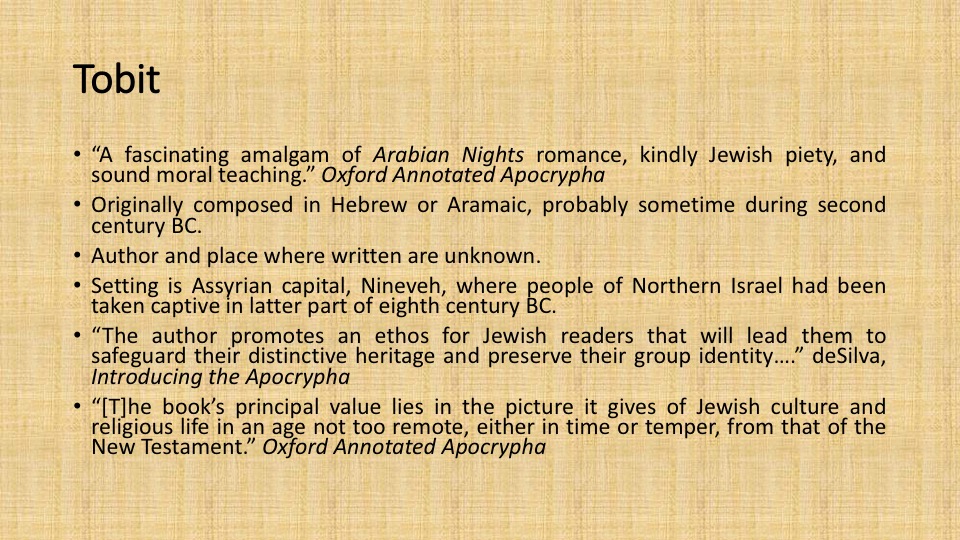 Originally composed in Hebrew or Aramaic, probably sometime during second century BC.

Author and place where written are unknown.

Setting is Assyrian capital, Nineveh, where people of Northern Israel had been taken captive in latter part of eighth century BC.

“The author promotes an ethos for Jewish readers that will lead them to safeguard their distinctive heritage and preserve their group identity….” deSilva, Introducing the Apocrypha.

“[T]he book’s principal value lies in the picture it gives of Jewish culture and religious life in an age not too remote, either in time or temper, from that of the New Testament.” Oxford Annotated Apocrypha. 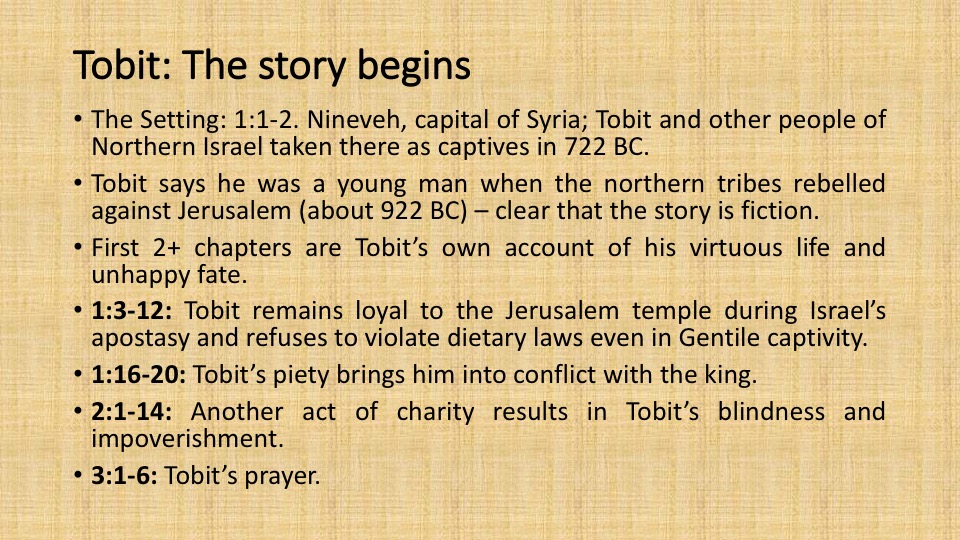 The Setting: 1:1-2. Nineveh, capital of Syria; Tobit and other people of Northern Israel taken there as captives in 722 BC.

Tobit says he was a young man when the northern tribes rebelled against Jerusalem (about 922 BC) – clear that the story is fiction.

First 2+ chapters are Tobit’s own account of his virtuous life and unhappy fate.

•1:3-12: Tobit remains loyal to the Jerusalem temple during Israel’s apostasy and refuses to violate dietary laws even in Gentile captivity.

•2:1-14: Another act of charity results in Tobit’s blindness and impoverishment. 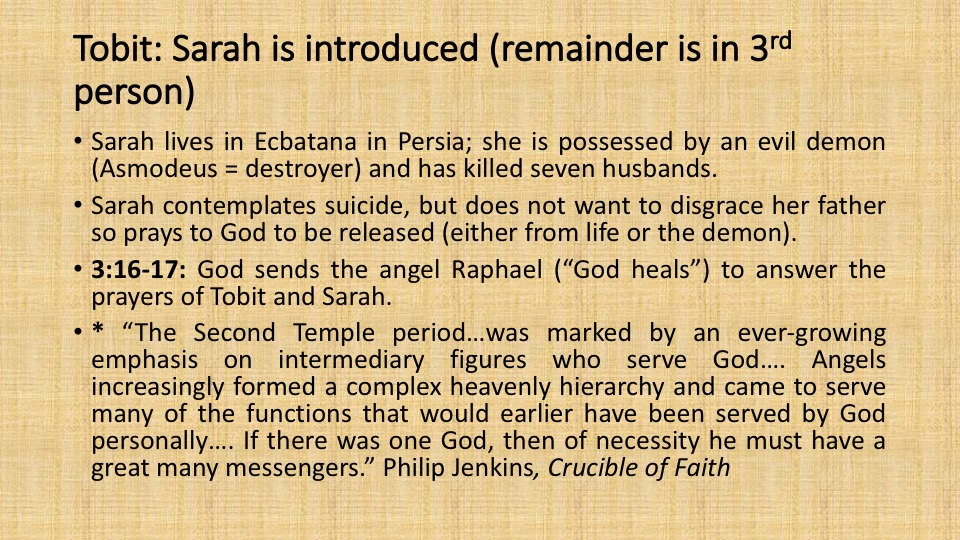 Tobit: Sarah is introduced (remainder is in 3rd person)

Sarah lives in Ecbatana in Persia; she is possessed by an evil demon (Asmodeus = destroyer) and has killed seven husbands.

Sarah contemplates suicide, but does not want to disgrace her father so prays to God to be released (either from life or the demon).

* “The Second Temple period…was marked by an ever-growing emphasis on intermediary figures who serve God…. Angels increasingly formed a complex heavenly hierarchy and came to serve many of the functions that would earlier have been served by God personally…. If there was one God, then of necessity he must have a great many messengers.” Philip Jenkins, Crucible of Faith. 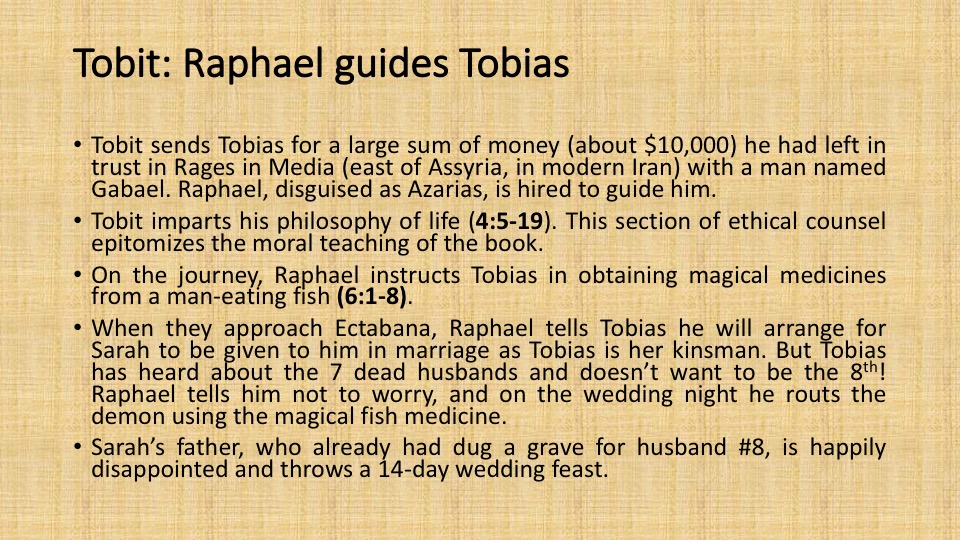 Tobit sends Tobias for a large sum of money (about $10,000) he had left in trust in Rages in Media (east of Assyria, in modern Iran) with a man named Gabael. Raphael, disguised as Azarias, is hired to guide him.

Tobit imparts his philosophy of life (4:5-19). This section of ethical counsel epitomizes the moral teaching of the book.

On the journey, Raphael instructs Tobias in obtaining magical medicines from a man-eating fish (6:1-8).

When they approach Ectabana, Raphael tells Tobias he will arrange for Sarah to be given to him in marriage as Tobias is her kinsman. But Tobias has heard about the 7 dead husbands and doesn’t want to be the 8th! Raphael tells him not to worry, and on the wedding night he routs the demon using the magical fish medicine.

Sarah’s father, who already had dug a grave for husband #8, is happily disappointed and throws a 14-day wedding feast. 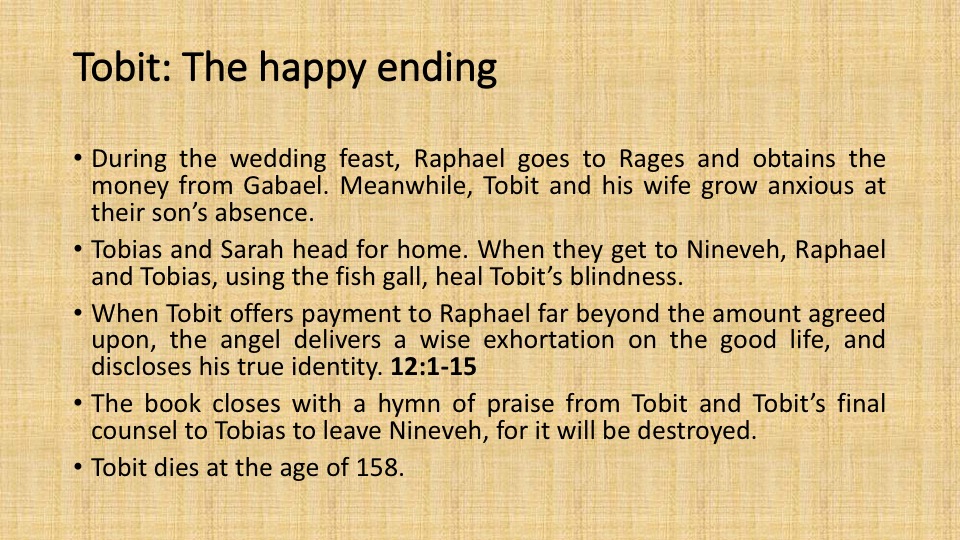 During the wedding feast, Raphael goes to Rages and obtains the money from Gabael. Meanwhile, Tobit and his wife grow anxious at their son’s absence.

Tobias and Sarah head for home. When they get to Nineveh, Raphael and Tobias, using the fish gall, heal Tobit’s blindness.

When Tobit offers payment to Raphael far beyond the amount agreed upon, the angel delivers a wise exhortation on the good life, and discloses his true identity. 12:1-15

The book closes with a hymn of praise from Tobit and Tobit’s final counsel to Tobias to leave Nineveh, for it will be destroyed. 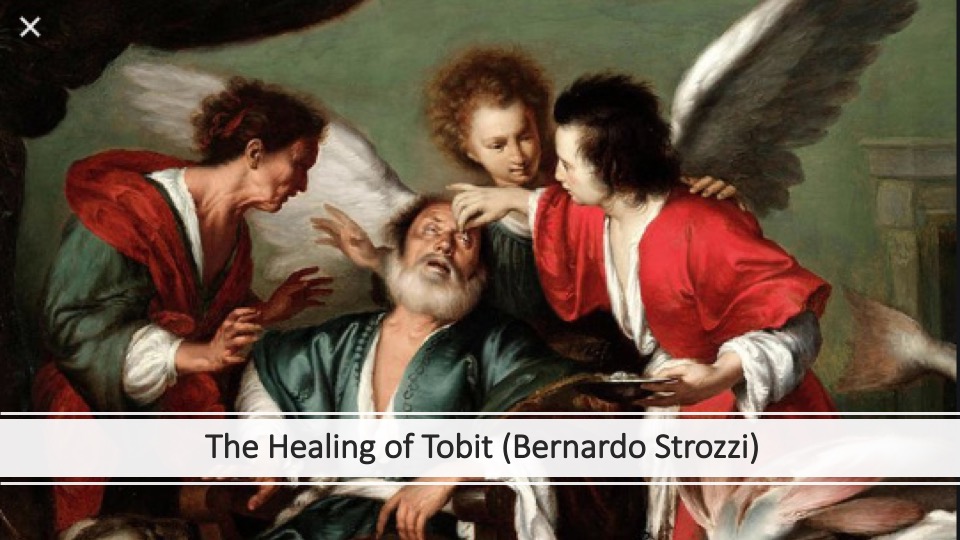 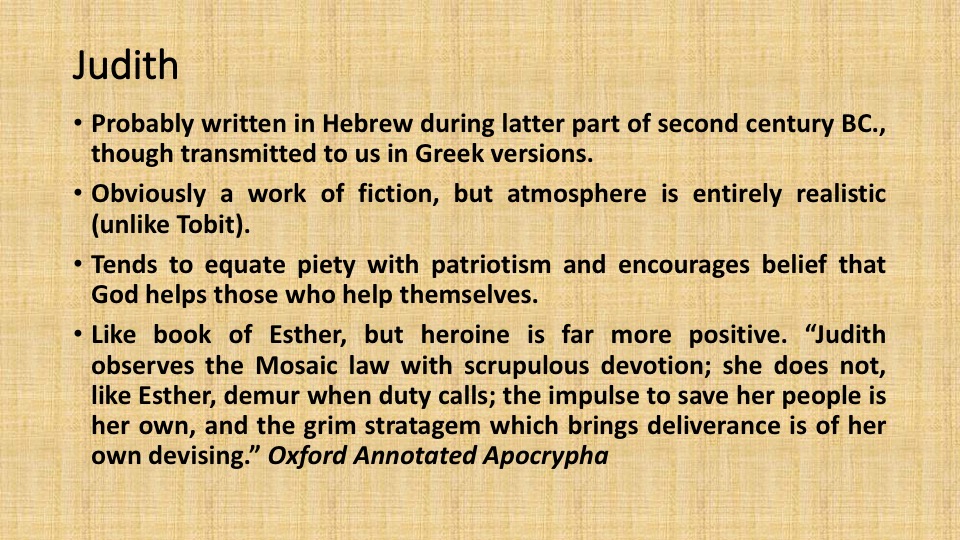 Probably written in Hebrew during latter part of second century BC., though transmitted to us in Greek versions.

Obviously a work of fiction, but atmosphere is entirely realistic (unlike Tobit).

Tends to equate piety with patriotism and encourages belief that God helps those who help themselves.

Like book of Esther, but heroine is far more positive. “Judith observes the Mosaic law with scrupulous devotion; she does not, like Esther, demur when duty calls; the impulse to save her people is her own, and the grim stratagem which brings deliverance is of her own devising.” Oxford Annotated Apocrypha. 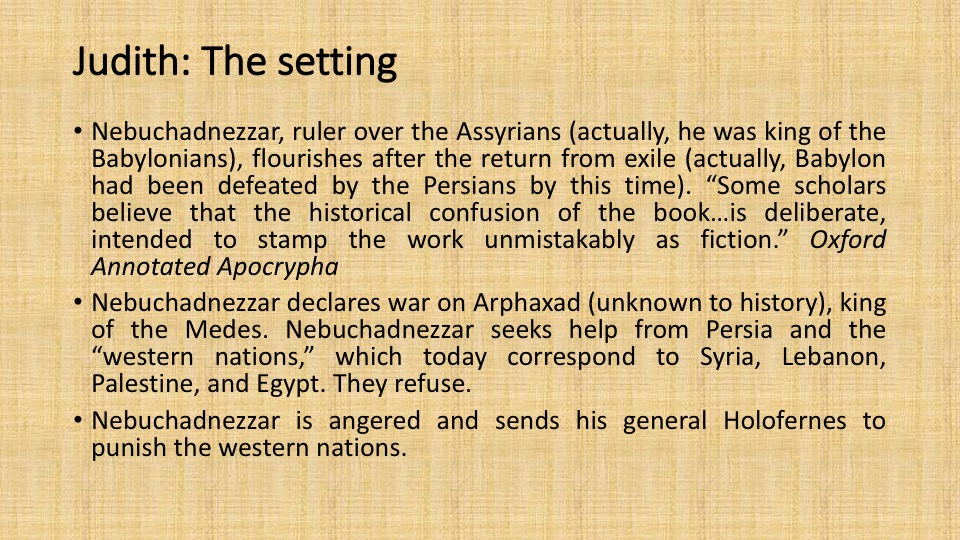 Nebuchadnezzar, ruler over the Assyrians (actually, he was king of the Babylonians), flourishes after the return from exile (actually, Babylon had been defeated by the Persians by this time). “Some scholars believe that the historical confusion of the book…is deliberate, intended to stamp the work unmistakably as fiction.” Oxford Annotated Apocrypha.

Nebuchadnezzar declares war on Arphaxad (unknown to history), king of the Medes. Nebuchadnezzar seeks help from Persia and the “western nations,” which today correspond to Syria, Lebanon, Palestine, and Egypt. They refuse.

Nebuchadnezzar is angered and sends his general Holofernes to punish the western nations. 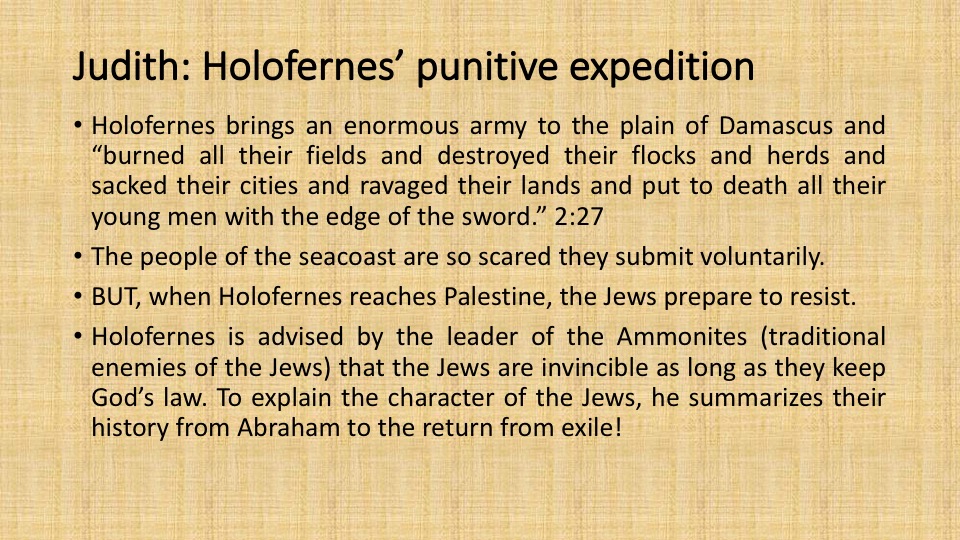 Holofernes brings an enormous army to the plain of Damascus and “burned all their fields and destroyed their flocks and herds and sacked their cities and ravaged their lands and put to death all their young men with the edge of the sword.” 2:27

The people of the seacoast are so scared they submit voluntarily.

BUT, when Holofernes reaches Palestine, the Jews prepare to resist.

Holofernes is advised by the leader of the Ammonites (traditional enemies of the Jews) that the Jews are invincible as long as they keep God’s law. To explain the character of the Jews, he summarizes their history from Abraham to the return from exile! 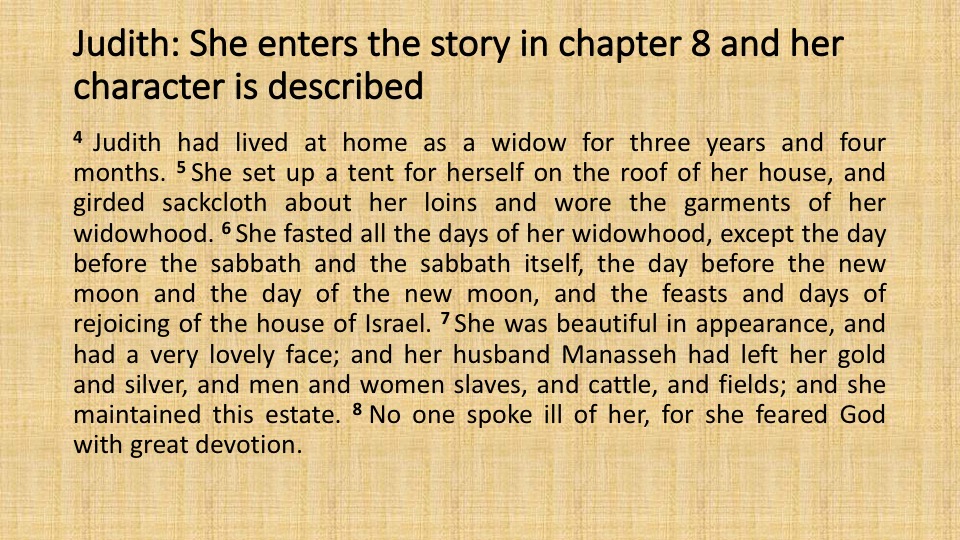 Judith: She enters the story in chapter 8 and her character is described

4 Judith had lived at home as a widow for three years and four months. 5 She set up a tent for herself on the roof of her house, and girded sackcloth about her loins and wore the garments of her widowhood. 6 She fasted all the days of her widowhood, except the day before the sabbath and the sabbath itself, the day before the new moon and the day of the new moon, and the feasts and days of rejoicing of the house of Israel. 7 She was beautiful in appearance, and had a very lovely face; and her husband Manasseh had left her gold and silver, and men and women slaves, and cattle, and fields; and she maintained this estate. 8 No one spoke ill of her, for she feared God with great devotion. 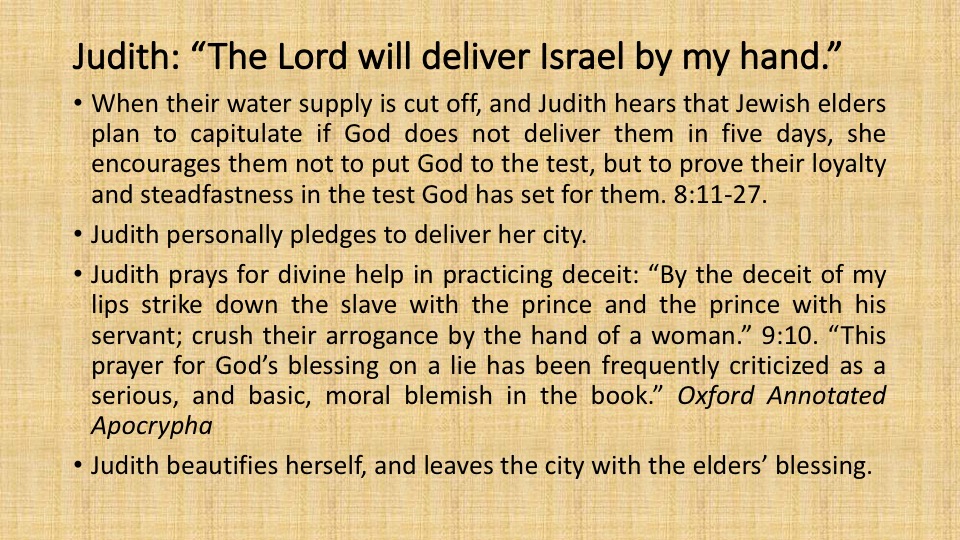 Judith: “The Lord will deliver Israel by my hand.”

When their water supply is cut off, and Judith hears that Jewish elders plan to capitulate if God does not deliver them in five days, she encourages them not to put God to the test, but to prove their loyalty and steadfastness in the test God has set for them. 8:11-27.

Judith prays for divine help in practicing deceit: “By the deceit of my lips strike down the slave with the prince and the prince with his servant; crush their arrogance by the hand of a woman.” 9:10. “This prayer for God’s blessing on a lie has been frequently criticized as a serious, and basic, moral blemish in the book.” Oxford Annotated Apocrypha.

Judith beautifies herself, and leaves the city with the elders’ blessing. 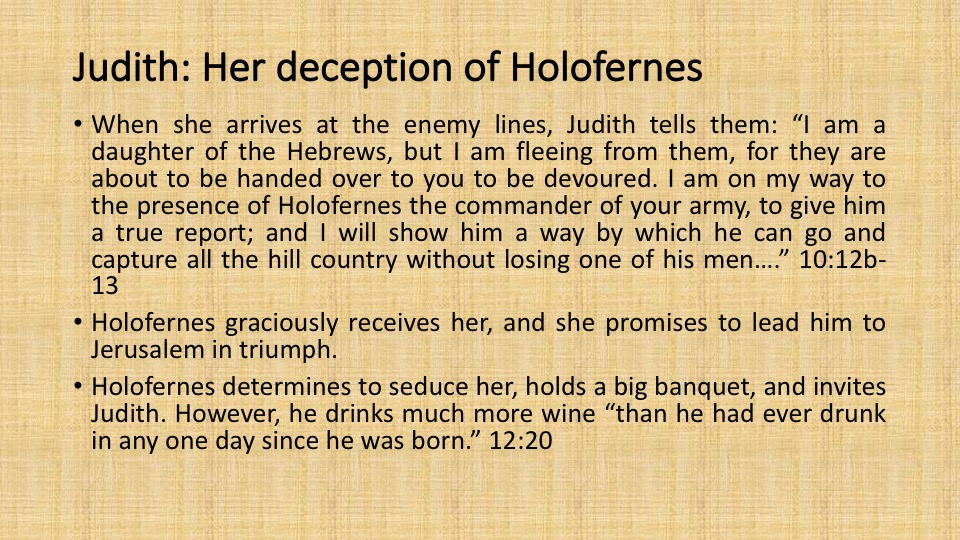 Judith: Her deception of Holofernes

When she arrives at the enemy lines, Judith tells them: “I am a daughter of the Hebrews, but I am fleeing from them, for they are about to be handed over to you to be devoured. I am on my way to the presence of Holofernes the commander of your army, to give him a true report; and I will show him a way by which he can go and capture all the hill country without losing one of his men….” 10:12b-13

Holofernes graciously receives her, and she promises to lead him to Jerusalem in triumph.

Holofernes determines to seduce her, holds a big banquet, and invites Judith. However, he drinks much more wine “than he had ever drunk in any one day since he was born.” 12:20 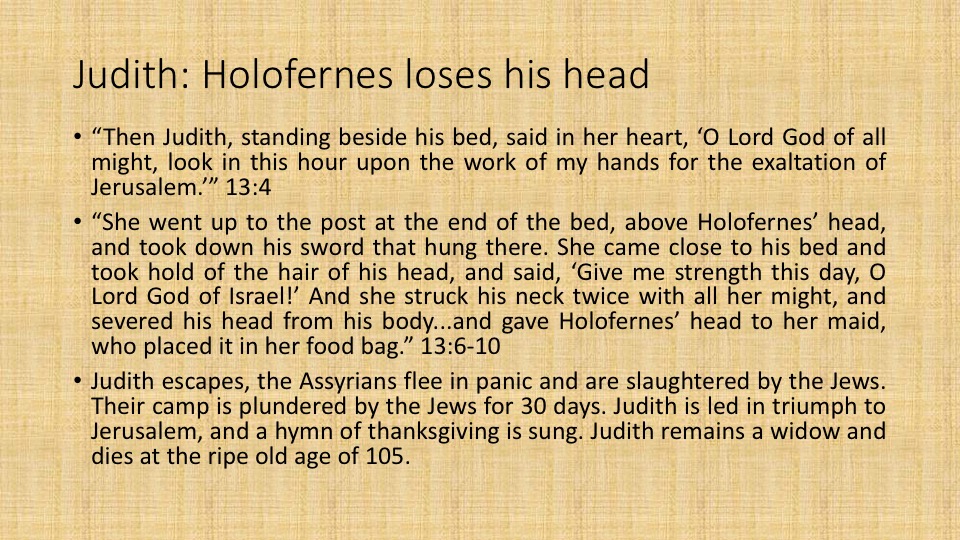 “Then Judith, standing beside his bed, said in her heart, ‘O Lord God of all might, look in this hour upon the work of my hands for the exaltation of Jerusalem.’” 13:4

“She went up to the post at the end of the bed, above Holofernes’ head, and took down his sword that hung there. She came close to his bed and took hold of the hair of his head, and said, ‘Give me strength this day, O Lord God of Israel!’ And she struck his neck twice with all her might, and severed his head from his body...and gave Holofernes’ head to her maid, who placed it in her food bag.” 13:6-10

Judith escapes, the Assyrians flee in panic and are slaughtered by the Jews. Their camp is plundered by the Jews for 30 days. Judith is led in triumph to Jerusalem, and a hymn of thanksgiving is sung. Judith remains a widow and dies at the ripe old age of 105. 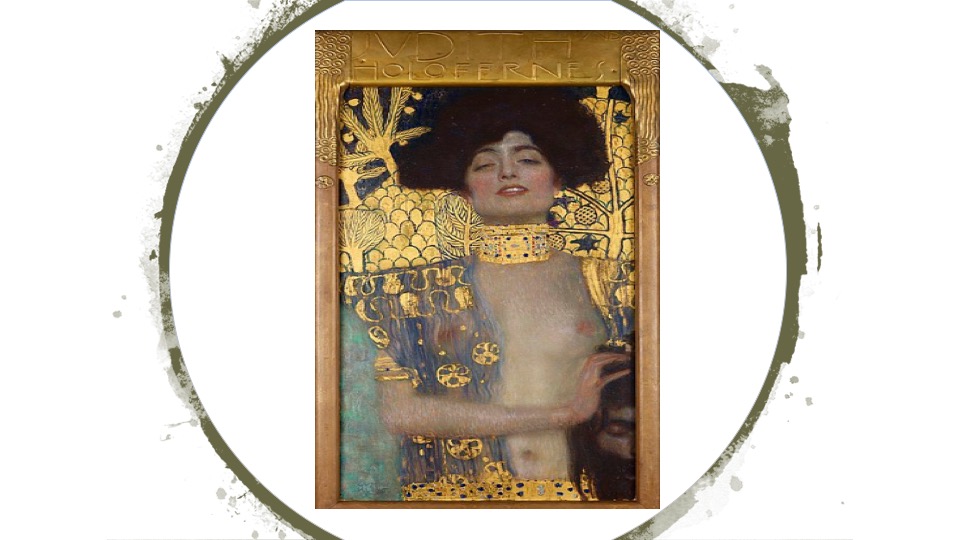 Judith and the Head of Holofernes