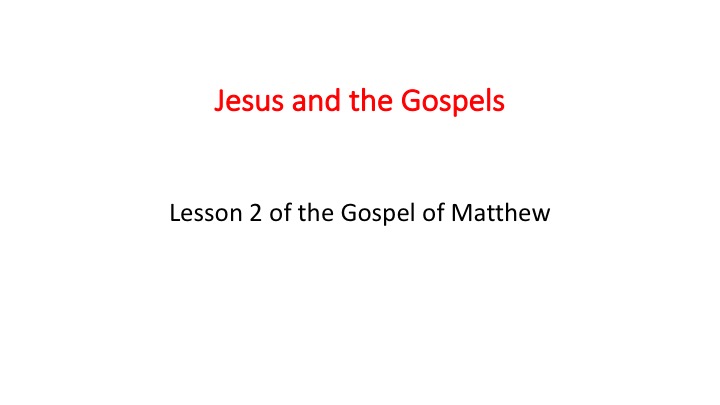 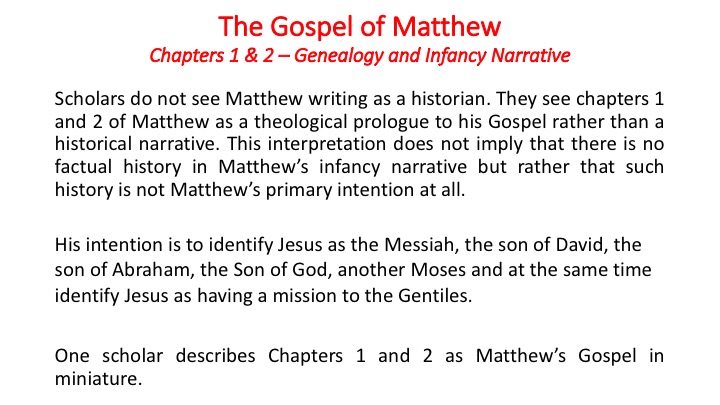 Scholars do not see Matthew writing as a historian. They see chapters 1 and 2 of Matthew as a theological prologue to his Gospel rather than a historical narrative. This interpretation does not imply that there is no factual history in the infancy narrative but rather that such history is not Matthew’s primary intention.

One scholar describes Chapters 1 and 2 as Matthew’s Gospel in miniature. 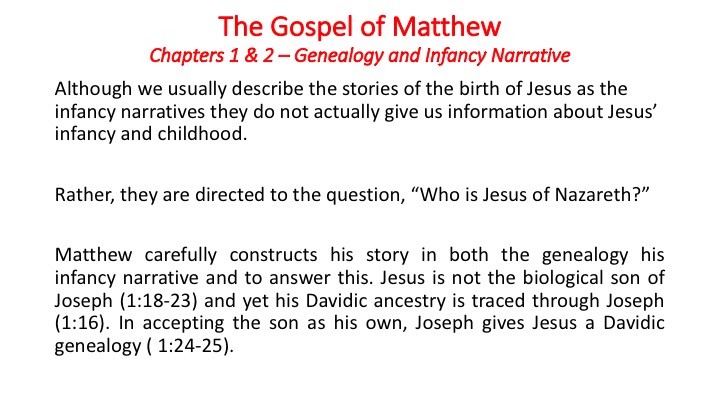 The Gospel of Matthew –

Although we usually describe the stories of the birth of Jesus as the infancy narratives they do not actually give us information about Jesus’ infancy and childhood.

Rather, they are directed to the question, “Who is Jesus of Nazareth?”

Matthew carefully constructs his story to answer this. Jesus is not the biological son of Joseph (1:18-23) and yet his Davidic ancestry is traced through Joseph (1:16). In accepting the son as his own, Joseph gives Jesus a Davidic genealogy ( 1:24-25). 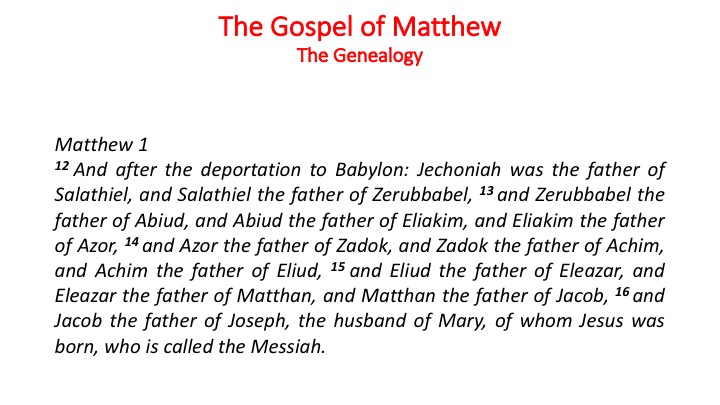 The Gospel of Matthew
The Genealogy 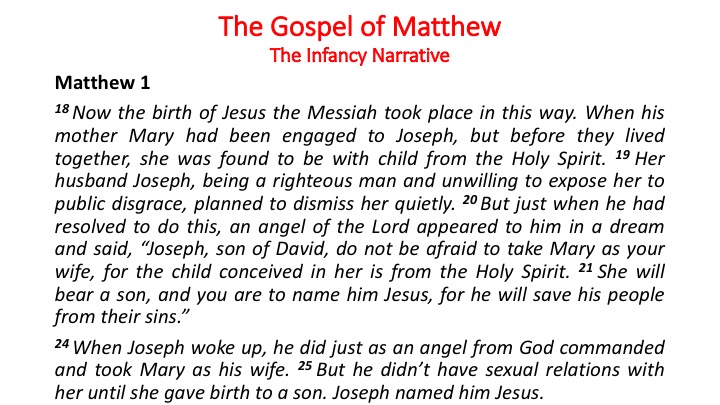 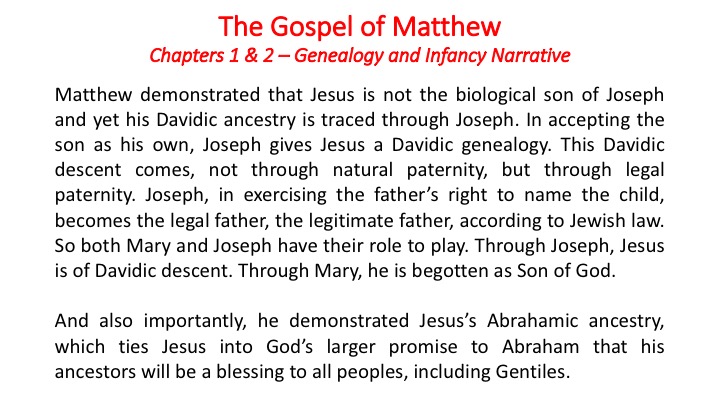 The Gospel of Matthew –

So what did Matthew just do in Chapter 1 and 2?

Matthew demonstrated that Jesus is not the biological son of Joseph and yet his Davidic ancestry is traced through Joseph. In accepting the son as his own, Joseph gives Jesus a Davidic genealogy. This Davidic descent comes, not through natural paternity, but through legal paternity. Joseph, in exercising the father’s right to name the child, becomes the legal father, the legitimate father, according to Jewish law. So both Mary and Joseph have their role to play. Through Joseph, Jesus is of Davidic descent. Through Mary, he is begotten as Son of God.

And also importantly, he demonstrated Jesus’s Abrahamic ancestry, which ties Jesus into God’s larger promise to Abraham that his ancestors will be a blessing to all peoples, including Gentiles. 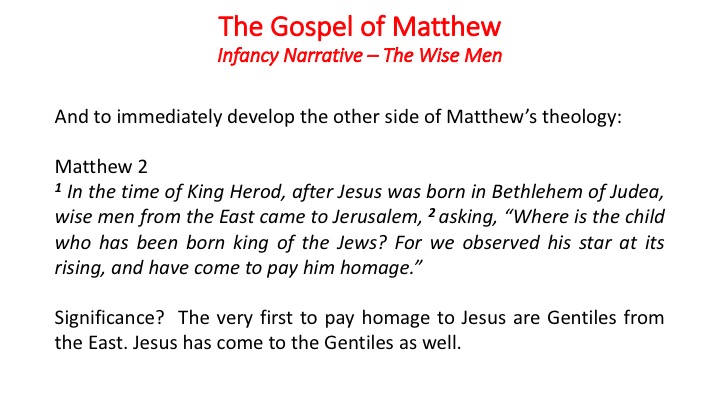 The Gospel of Matthew
Infancy Narrative – The Wise Men

2 In the time of King Herod, after Jesus was born in Bethlehem of Judea, wise men from the East came to Jerusalem, 2 asking, “Where is the child who has been born king of the Jews? For we observed his star at its rising, and have come to pay him homage.”

Significance?  The very first people to pay homage to Jesus are Gentiles from the East. Jesus has come to the Gentiles as well. 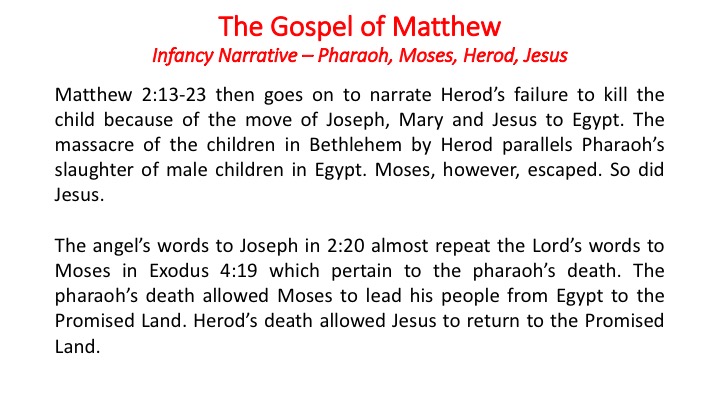 Matthew 2:13-23 then goes on to narrate Herod’s failure to kill the child because of the move of Joseph, Mary and Jesus to Egypt. The massacre of the children in Bethlehem by Herod parallels Pharaoh’s slaughter of male children in Egypt. Moses, however, escaped. So did Jesus. 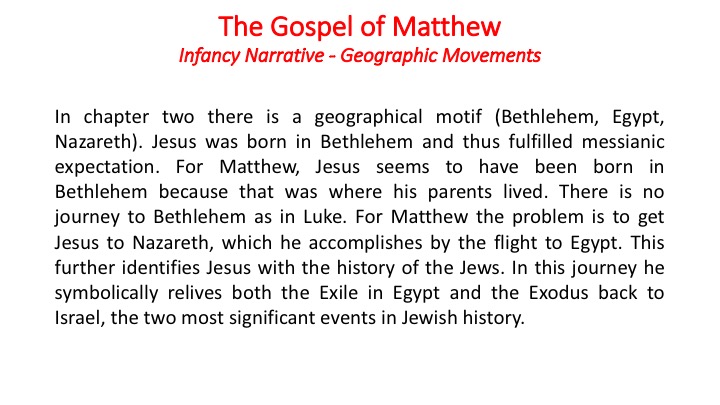 In chapter two there is a geographical motif (Bethlehem, Egypt, Nazareth). Jesus was born in Bethlehem and thus fulfilled messianic expectation. Matthew’s use of Micah 5:1 and 2 Samuel 5:2 which both mention Bethlehem reinforce his theme. (For Matthew, Jesus seems to have been born in Bethlehem because that was where his parents lived. There is no journey to Bethlehem as in Luke. For Matthew the problem is to get Jesus to Nazareth, which he accomplishes by the flight to Egypt. This further identifies Jesus with the history of the Jews. In this journey he symbolically relives both the Exile in Egypt and the Exodus back to Israel, the two most significant events in Jewish history. 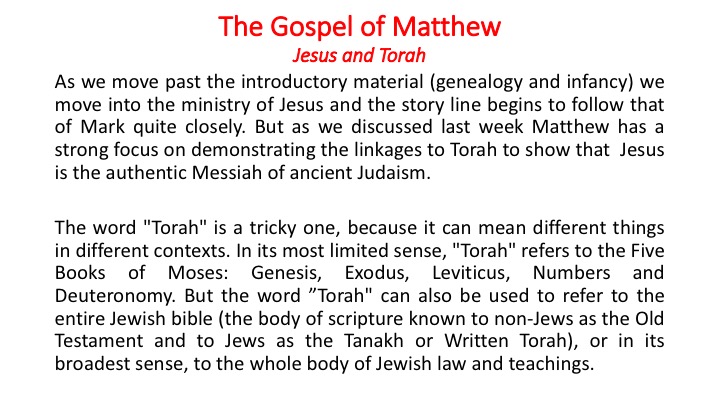 As we move past the introductory material (genealogy and infancy) we move into the ministry of Jesus and the story line begins to follow that of Mark quite closely. But as we discussed last week Matthew has a strong focus on demonstrating the linkages to Torah to show that  Jesus is the authentic Messiah of ancient Judaism.

The word "Torah" is a tricky one, because it can mean different things in different contexts. In its most limited sense, "Torah" refers to the Five Books of Moses: Genesis, Exodus, Leviticus, Numbers and Deuteronomy. But the word ”Torah" can also be used to refer to the entire Jewish bible (the body of scripture known to non-Jews as the Old Testament and to Jews as the Tanakh or Written Torah), or in its broadest sense, to the whole body of Jewish law and teachings. 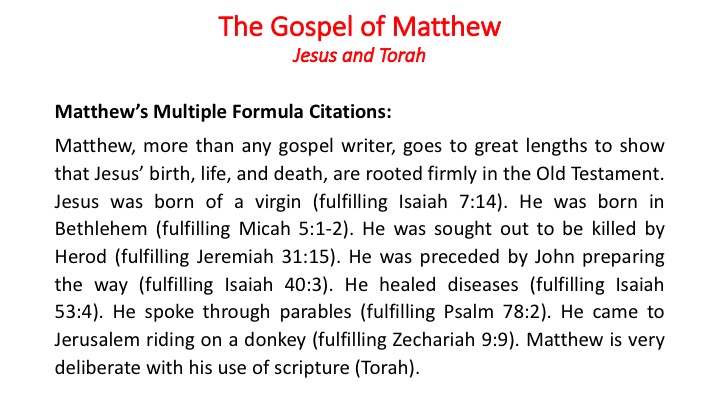 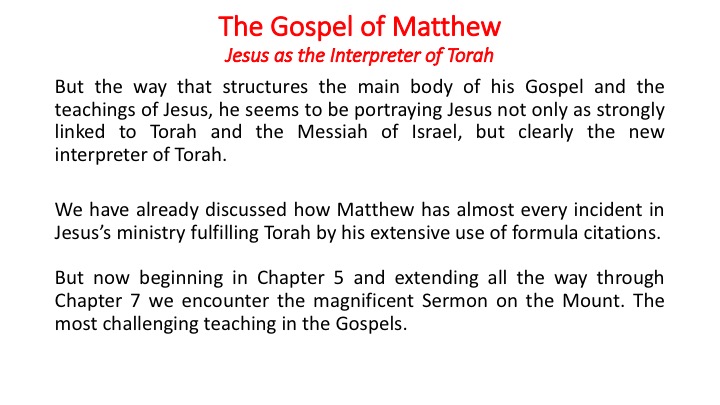 By the way that he structures the main body of his Gospel and the teachings of Jesus, he seems to be portraying Jesus not only as strongly linked to Torah, but clearly the new interpreter of Torah.

We have already discussed how Matthew has almost every incident in Jesus’s ministry fulfilling Torah by his extensive use of formula citations.

But now beginning in Chapter 5 and extending all the way through Chapter 7 we encounter the magnificent Sermon on the Mount. The most challenging teaching in the Gospels. 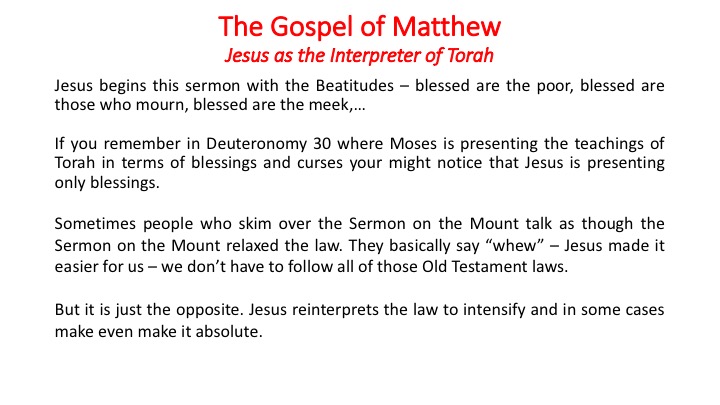 Jesus as the Interpreter of Torah

If you remember in Deuteronomy 30 where Moses is presenting the teachings of Torah in terms of blessings and curses your might notice that Jesus is presenting only blessings.

But it is just the opposite. Jesus reinterprets the law to intensify and in some cases make even make it absolute. 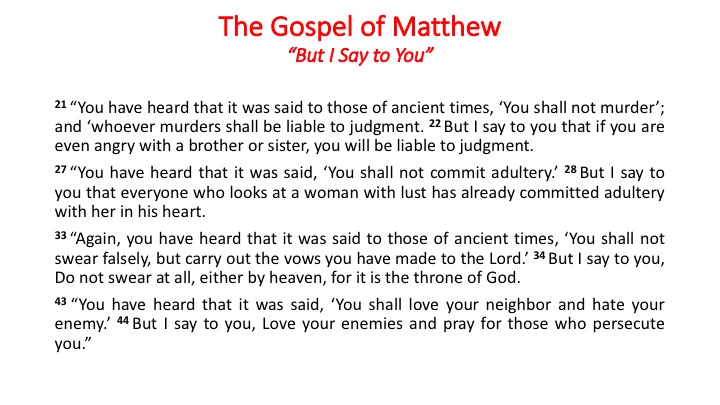 The Gospel of Matthew
Jesus as the Interpreter of Torah

27 “You have heard that it was said, ‘You shall not commit adultery.’ 28 But I say to you that everyone who looks at a woman with lust has already committed adultery with her in his heart.

33 “Again, you have heard that it was said to those of ancient times, ‘You shall not swear falsely, but carry out the vows you have made to the Lord.’ 34 But I say to you, Do not swear at all, either by heaven, for it is the throne of God.

43 “You have heard that it was said, ‘You shall love your neighbor and hate your enemy.’ 44 But I say to you, Love your enemies and pray for those who persecute you.” 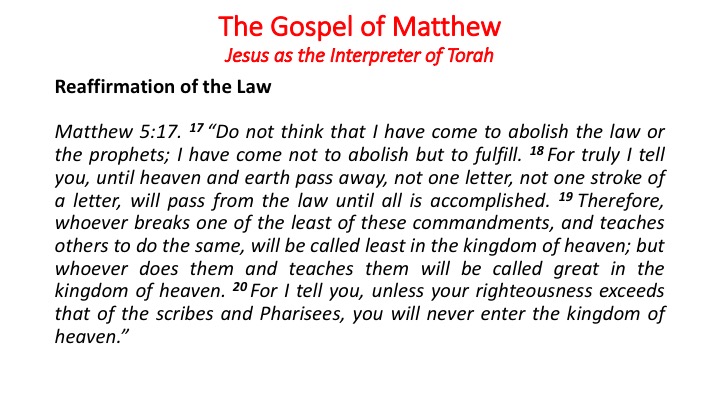 The Gospel of Matthew
Jesus as the Interpreter of Torah

Reaffirmation of the Law

Matthew 5:17. 17 “Do not think that I have come to abolish the law or the prophets; I have come not to abolish but to fulfill. 18 For truly I tell you, until heaven and earth pass away, not one letter, not one stroke of a letter, will pass from the law until all is accomplished. 19 Therefore, whoever breaks one of the least of these commandments, and teaches others to do the same, will be called least in the kingdom of heaven; but whoever does them and teaches them will be called great in the kingdom of heaven. 20 For I tell you, unless your righteousness exceeds that of the scribes and Pharisees, you will never enter the kingdom of heaven. 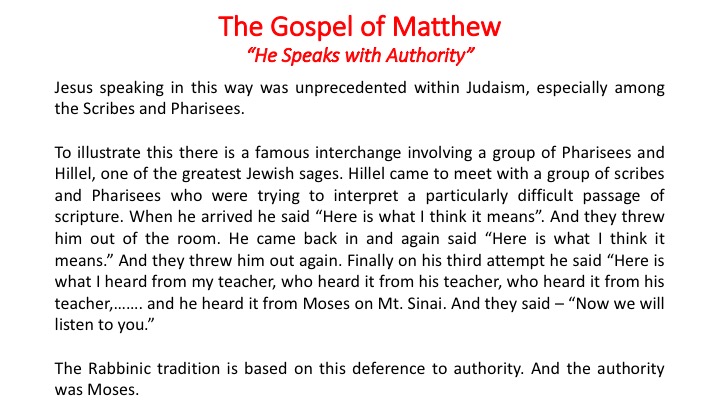 The Gospel of Matthew
“He Speaks with Authority”

Jesus speaking in this way was unprecedented within Judaism, especially among the Scribes and Pharisees.

The Rabbinic tradition is based on this deference to authority. 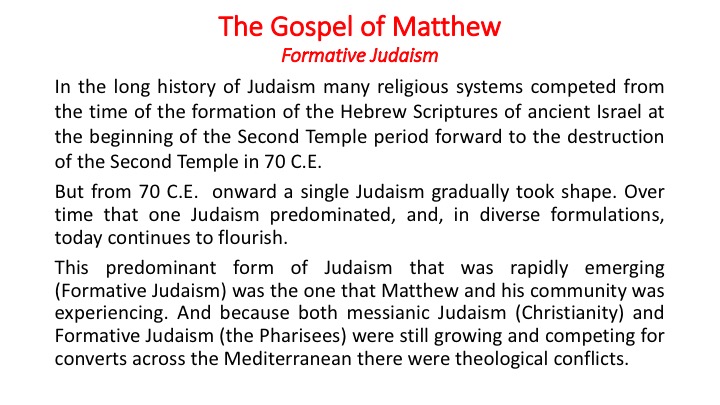 The Gospel of Matthew
Formative Judaism

But from 70 C.E.  onward a single Judaism gradually took shape. Over time that one Judaism predominated, and, in diverse formulations, today continues to flourish.

This predominant form of Judaism that was rapidly emerging was the one that Matthew and his community was experiencing. And because both messianic Judaism (Christianity) and Pharisaic Judaism were still growing and competing for converts across the Mediterranean there were theological conflicts. 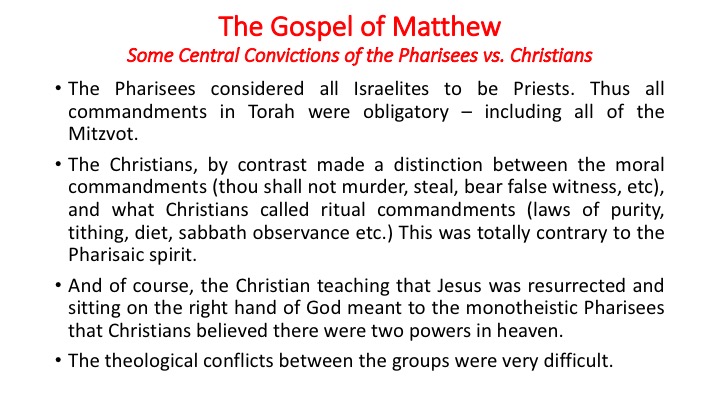 Some Central Convictions of the Pharisees vs. Christians

The Pharisees considered all Israelites to be Priests. Thus all commandments in Torah were obligatory – including all of the Mitzvot.

The Christians, by contrast made a distinction between the moral commandments (thou shall not murder, steal, bear false witness, etc), and what Christians called ritual commandments (laws of purity, tithing, diet, sabbath observance etc.) This was totally contrary to the Pharisaic spirit.

And of course, the Christian teaching that Jesus was resurrected and sitting on the right hand of God meant to the monotheistic Pharisees that Christians believed there were two powers in heaven.

The theological conflicts between the groups were very difficult. 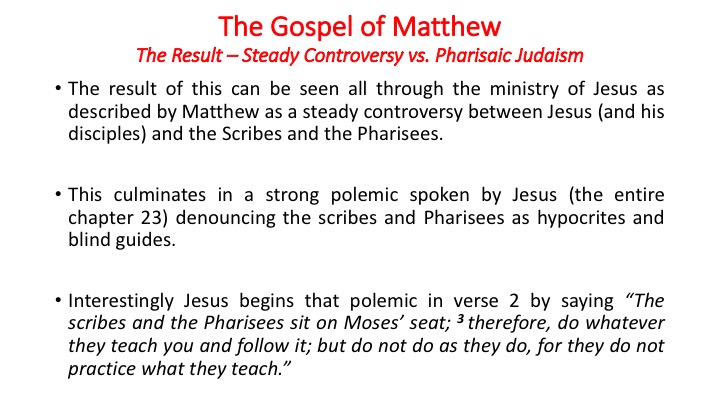 The Gospel of Matthew
The Result – Steady Controversy vs. Pharisaic Judaism

The result of this can be seen all through the ministry of Jesus as a steady controversy between Jesus (and his disciples) and the Scribes and the Pharisees.

This culminates in a strong polemic (the entire chapter 13) which is a sermon by Jesus denouncing the scribes and Pharisees as hypocrites and blind guides.

Interestingly Jesus begins that polemic in verse 2 by saying “The scribes and the Pharisees sit on Moses’ seat; 3 therefore, do whatever they teach you and follow it; but do not do as they do, for they do not practice what they teach.” 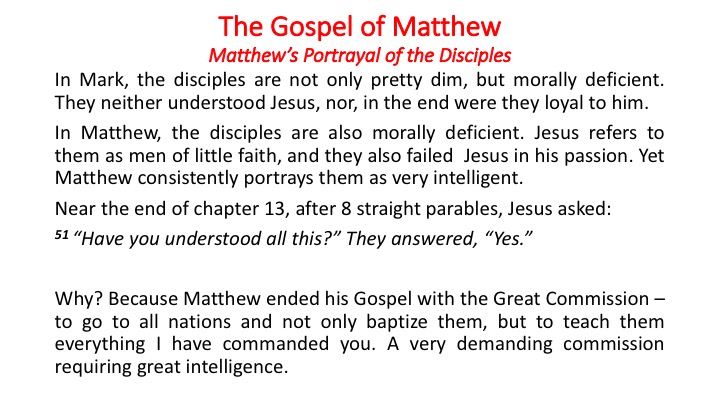 The Gospel of Matthew
Matthew’s Portrayal of the Disciples

In Mark, the disciples are not only pretty dim, but morally deficient. They neither understood Jesus, nor, in the end were they loyal to him.

In Matthew, the disciples are also morally deficient. Jesus refers to them as men of little faith, and they also failed  Jesus in his passion. Yet Matthew consistently portrays them as very intelligent.

Near the end of chapter 13, after 8 straight parables, Jesus asked:

Why? Because Matthew ended his Gospel with the Great Commission – to go to all nations and not only baptize them, but to teach them everything I have commanded you. A very demanding commission requiring great intelligence. 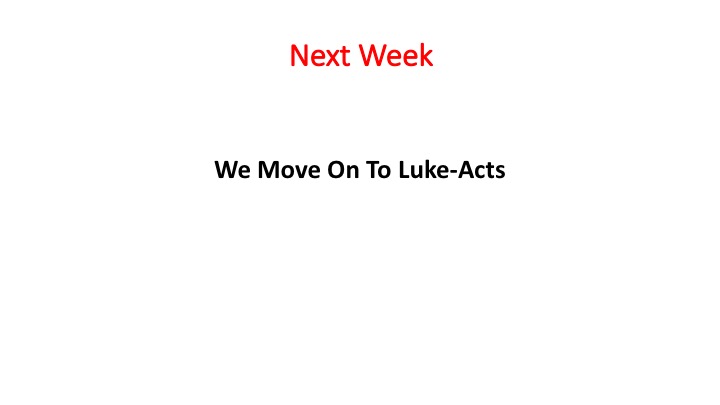