Jesus and the Gospels Lesson 8
John I 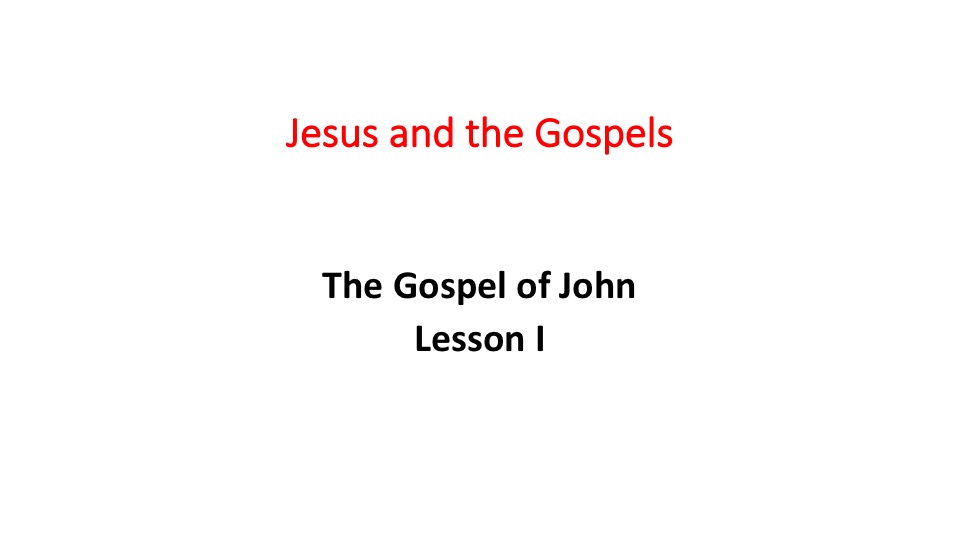 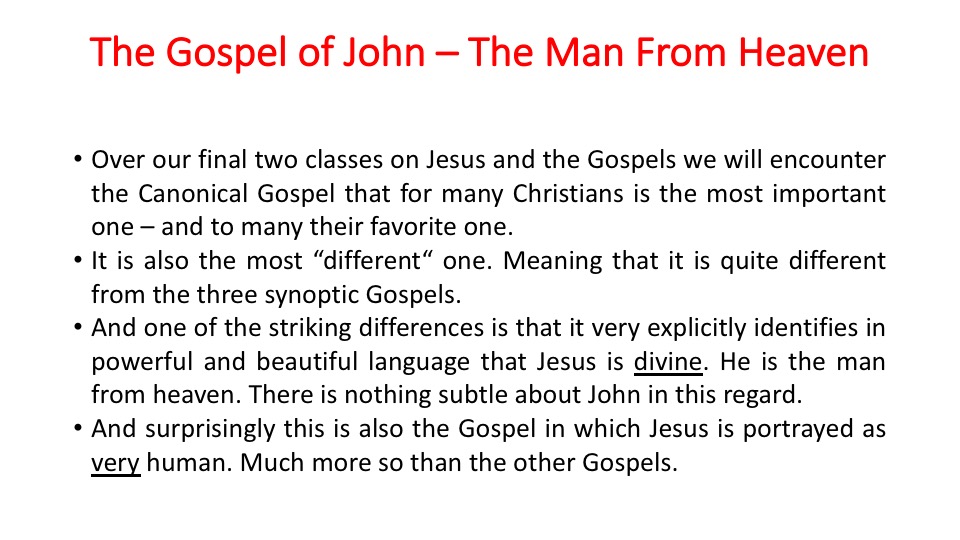 Over our final two classes on Jesus and the Gospels we will encounter the Canonical Gospel that for many Christians is the most important one – and to many their favorite one.

It is also the most “different“ one. Meaning that it is quite different from the three synoptic Gospels.

And one of the striking differences is that it very explicitly identifies in powerful and beautiful language that Jesus is divine. He is the man from heaven. There is nothing subtle about John in this regard.

And surprisingly this is also the Gospel in which Jesus is portrayed as very human. Much more so than the other Gospels. 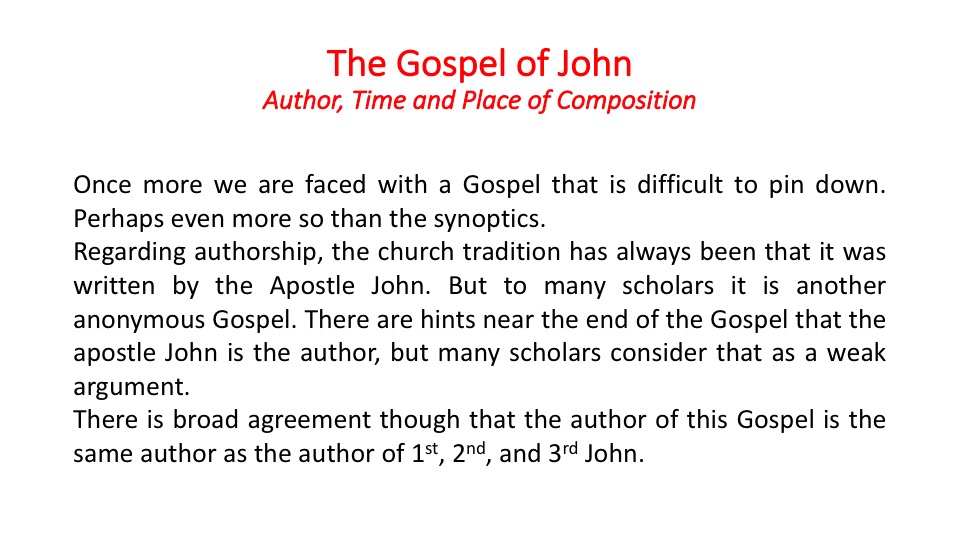 Once more we are faced with a Gospel that is difficult to pin down. Perhaps even more so than the synoptics.

Regarding authorship, the church tradition has always been that it was written by the Apostle John. But to many scholars it is another anonymous Gospel. There are hints near the end of the Gospel that the apostle John is the author, but many scholars consider that as a weak argument. 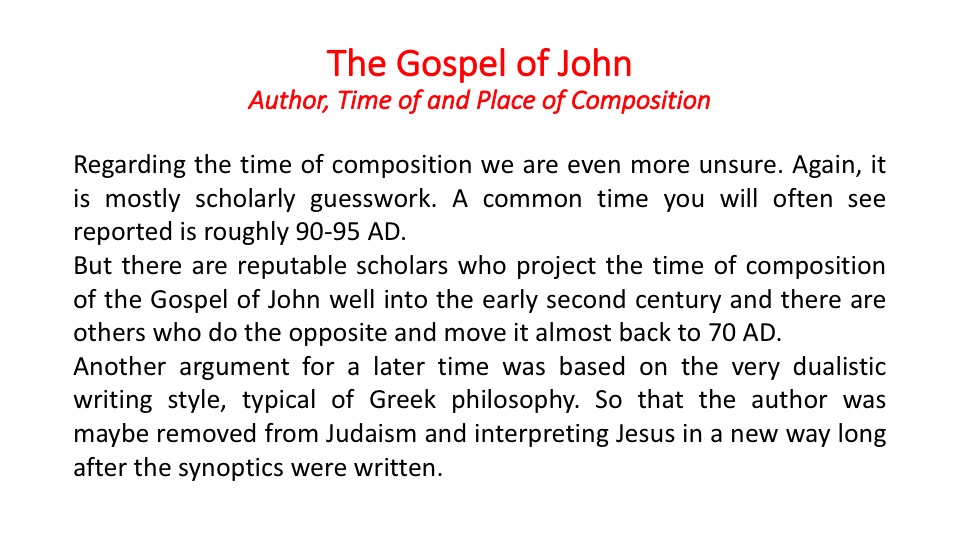 Regarding the time of composition we are even more unsure. Again, it is mostly scholarly guesswork.  A common time you will often see reported is roughly 90-95 AD.

But there are reputable scholars who project the time of composition of the Gospel of John well into the early second century and there are others who do the opposite and move it almost back to 70 AD.

Another argument for a later time was based on the very dualistic writing style, typical of Greek philosophy. So that the author was maybe removed from Judaism and interpreting Jesus in a new way long after the synoptics were written. 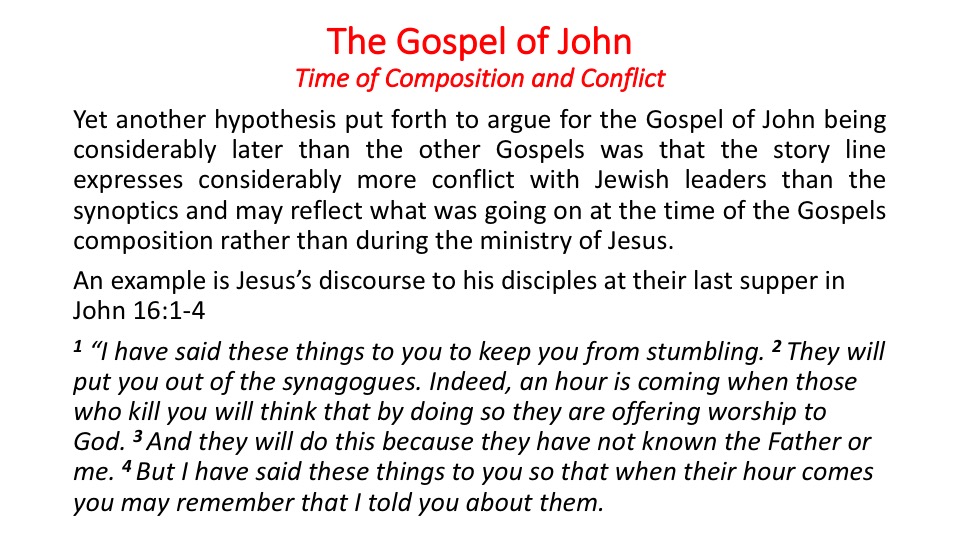 Yet another hypothesis put forth to argue for the Gospel of John being considerably later than the other Gospels was that the story line expresses considerably more conflict with Jewish leaders than the synoptics and may reflect what was going on at the time of the Gospels composition rather than during the ministry of Jesus.

An example is Jesus’s discourse to his disciples at their last supper in John 16:1-4

1 “I have said these things to you to keep you from stumbling. 2 They will put you out of the synagogues. Indeed, an hour is coming when those who kill you will think that by doing so they are offering worship to God. 3 And they will do this because they have not known the Father or me. 4 But I have said these things to you so that when their hour comes you may remember that I told you about them 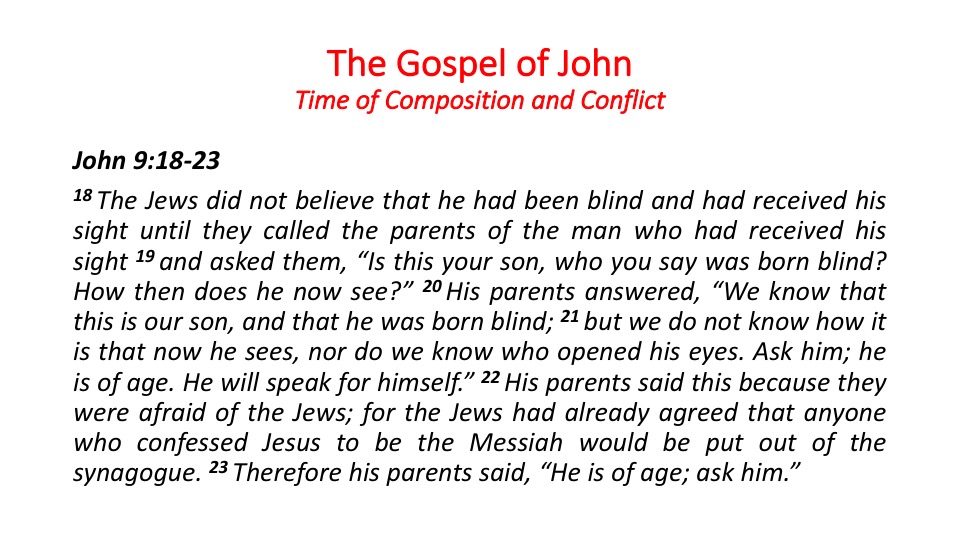 18 The Jews did not believe that he had been blind and had received his sight until they called the parents of the man who had received his sight 19 and asked them, “Is this your son, who you say was born blind? How then does he now see?” 20 His parents answered, “We know that this is our son, and that he was born blind; 21 but we do not know how it is that now he sees, nor do we know who opened his eyes. Ask him; he is of age. He will speak for himself.” 22 His parents said this because they were afraid of the Jews; for the Jews had already agreed that anyone who confessed Jesus to be the Messiah would be put out of the synagogue. 23 Therefore his parents said, “He is of age; ask him.” 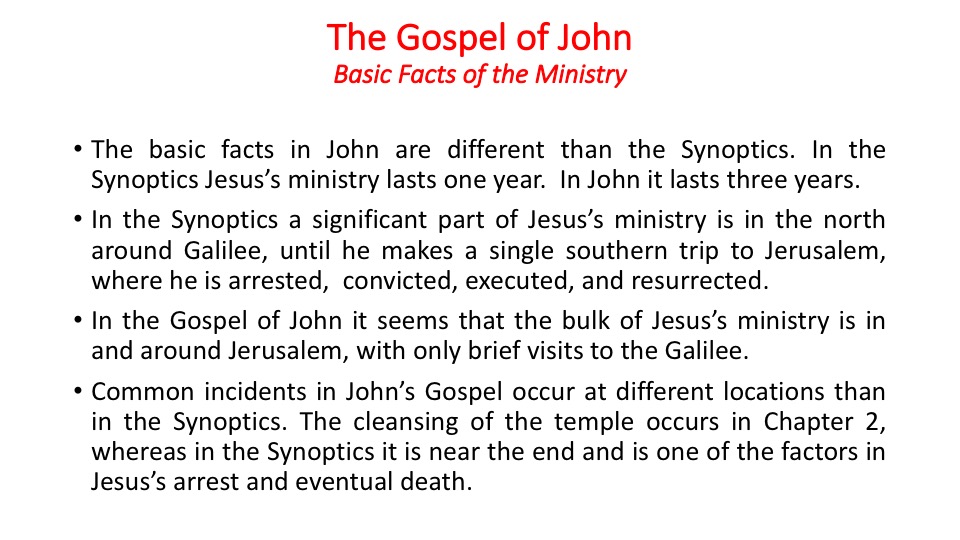 The basic facts in John are different than the Synoptics. In the Synoptics Jesus’s ministry lasts one year.  In John it lasts three years.

In the Synoptics a significant part of Jesus’s ministry is in the north around Galilee, until he makes a single southern trip to Jerusalem, where he is arrested,  convicted, executed, and resurrected.

In John it seems that the bulk of Jesus’s ministry is in an around Jerusalem, with only brief visits to the Galilee.

Common incidents in John’s Gospel occur at different locations than in the Synoptics. The cleansing of the temple occurs in Chapter 2, whereas in the Synoptics it is near the end and is one of the factors in Jesus’s arrest and eventual death. 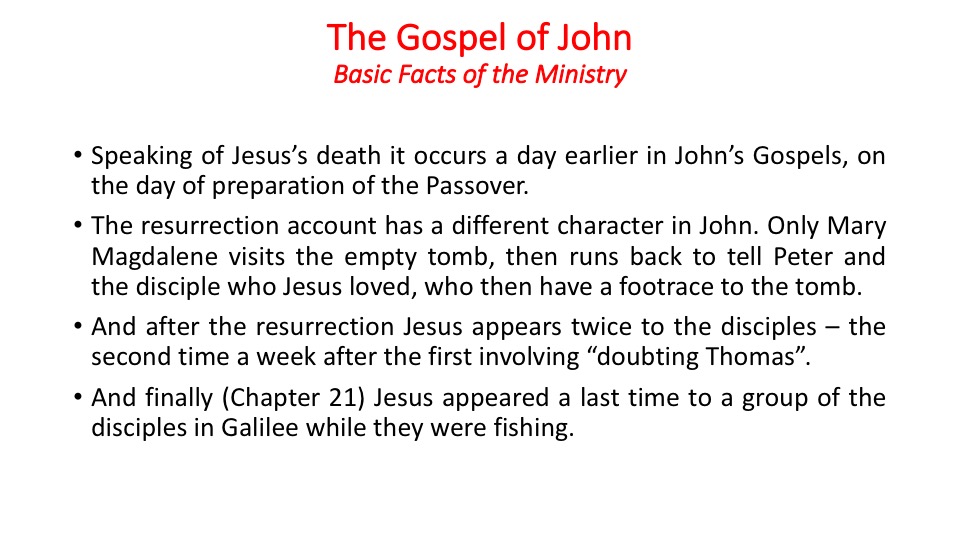 Speaking of Jesus’s death it occurs a day earlier in John’s Gospels, on the day of preparation of the Passover.

The resurrection account has a different character in John. Only Mary Magdalene visits the empty tomb, then runs back to tell Peter and the disciple who Jesus loved, who then have a footrace to the tomb.

And after the resurrection Jesus appears twice to the disciples – the second time a week after the first involving “doubting Thomas”.

And finally Jesus appeared a last time to a group of the disciples in Galilee while they were fishing. 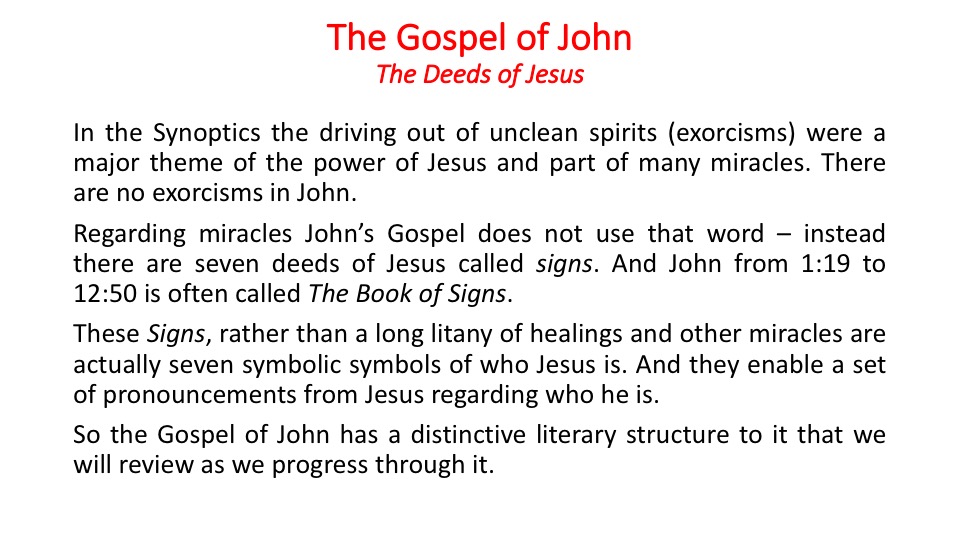 In the Synoptics the driving out of unclean spirits (exorcisms) were a major theme of the power of Jesus and part of many miracles. There are no exorcisms in John.

Regarding miracles John’s Gospel does not use that word – instead there are seven deeds of Jesus called signs. And John from 1:19 to 12:50 is often called The Book of Signs.

These Signs, rather than a long litany of healings and other miracles are actually seven symbolic symbols of who Jesus is. And they enable a set of pronouncements from Jesus regarding who he is.

So the Gospel of John has a distinctive literary structure to it that we will review as we progress through it. 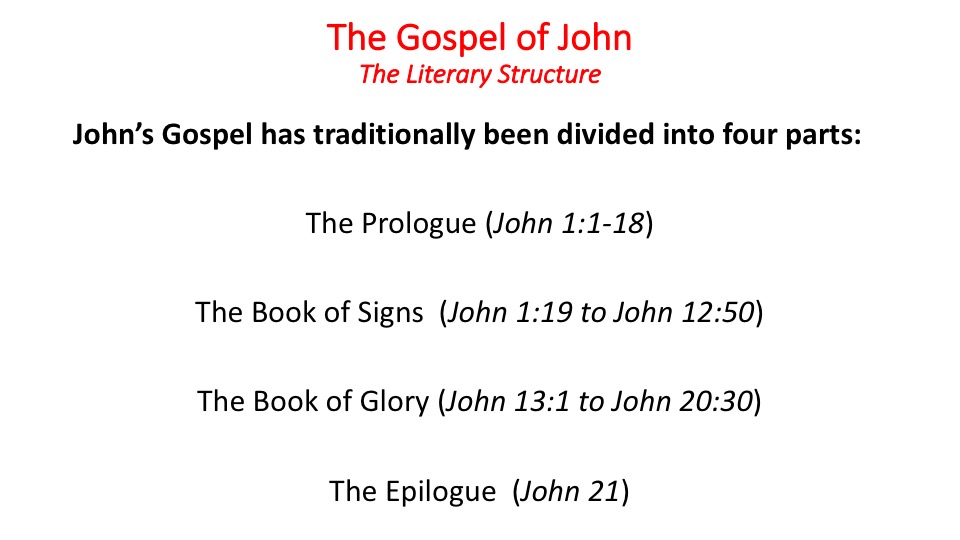 John’s Gospel has traditionally been divided into four parts: 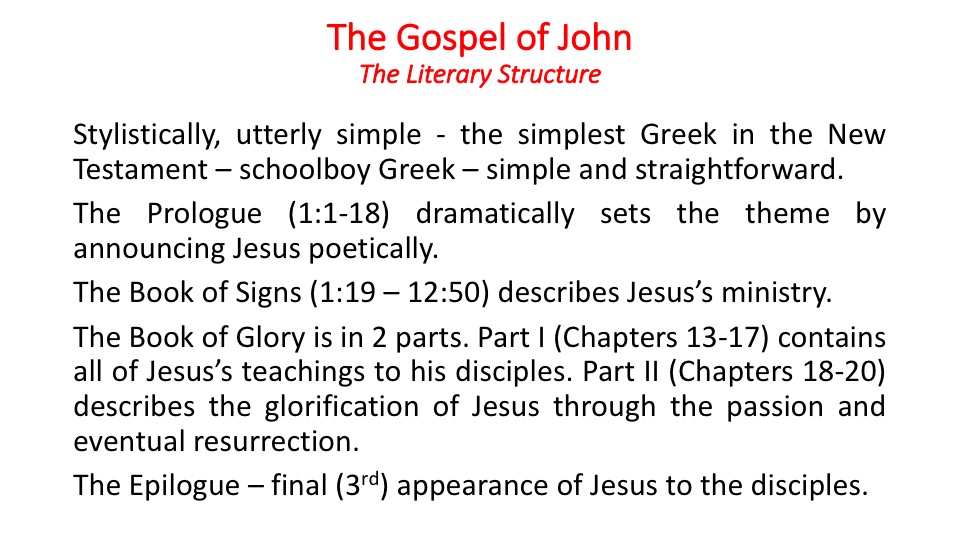 The Prologue (1:1-18) dramatically sets the theme by announcing Jesus poetically.

The Book of Glory is in 2 parts. Part I (Chapters 13-17) contains all of Jesus’s teachings to his disciples. Part II (Chapters 18-20) describes the glorification of Jesus through the passion and eventual resurrection.

The Epilogue – final (3rd) appearance of Jesus to the disciples. 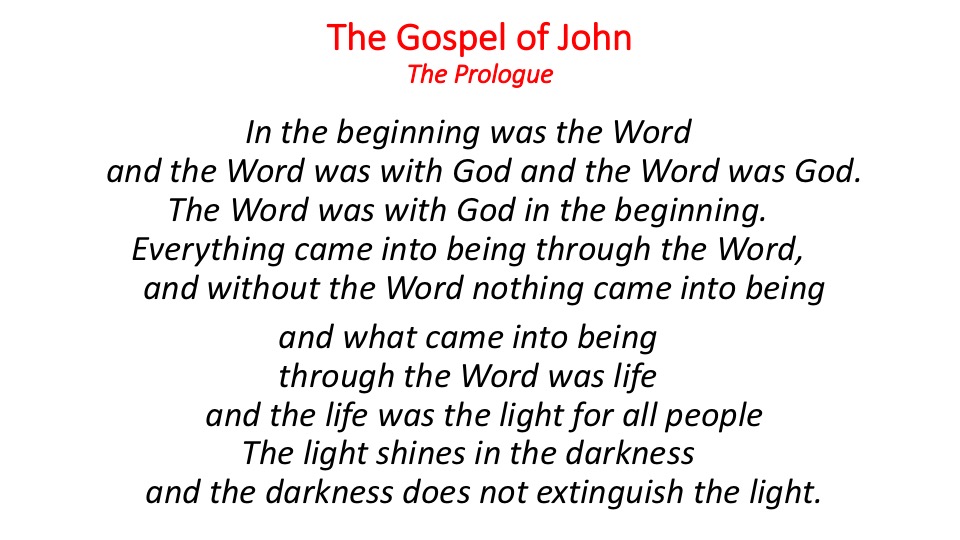 and what came into being
through the Word was life
and the life was the light for all people
The light shines in the darkness
and the darkness does not extinguish the light. 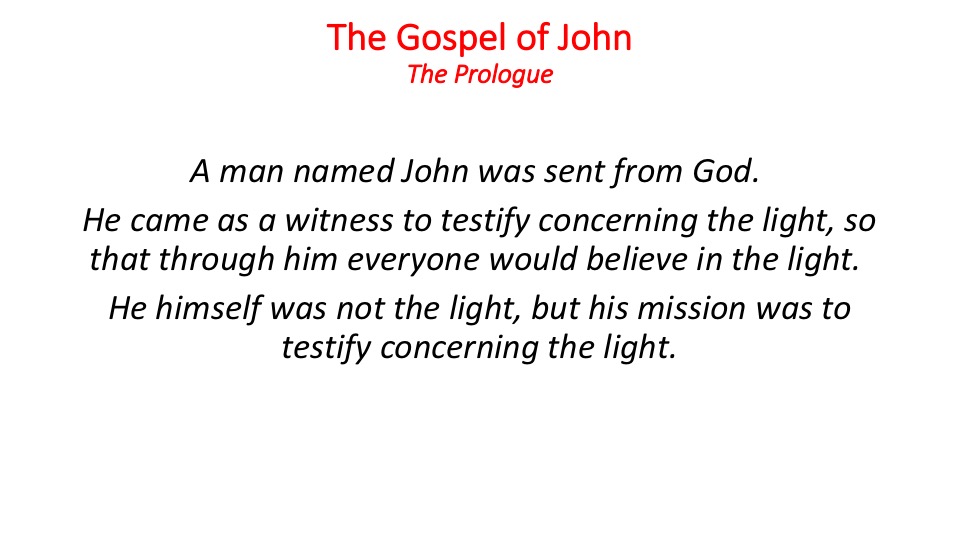 A man named John was sent from God. He came as a witness to testify concerning the light, so that through him everyone would believe in the light.

He himself wasn’t the light, but his mission was to testify concerning the light. 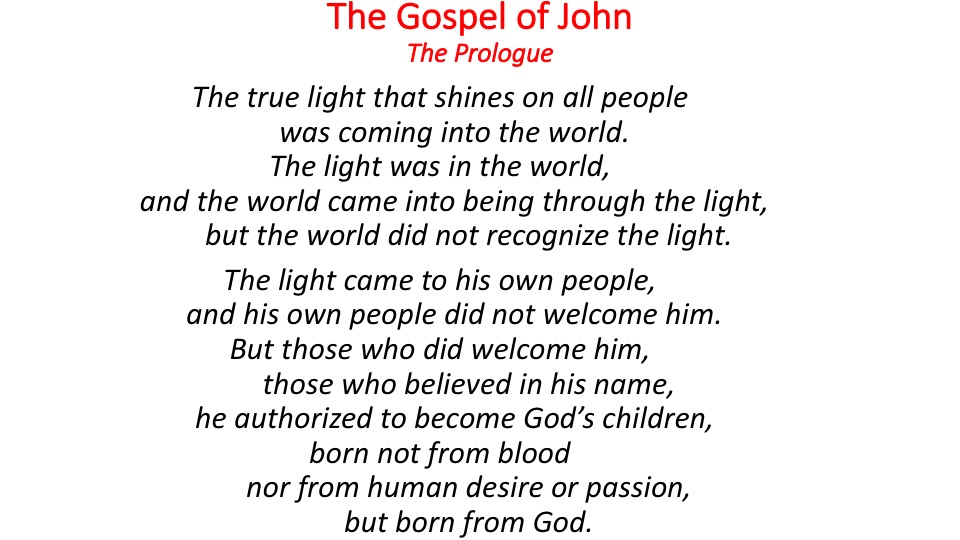 The true light that shines on all people
was coming into the world.
The light was in the world,
and the world came into being through the light,
but the world did not recognize the light.

The light came to his own people,
and his own people did not welcome him.
But those who did welcome him,
those who believed in his name,
he authorized to become God’s children,
born not from blood
nor from human desire or passion,
but born from God. 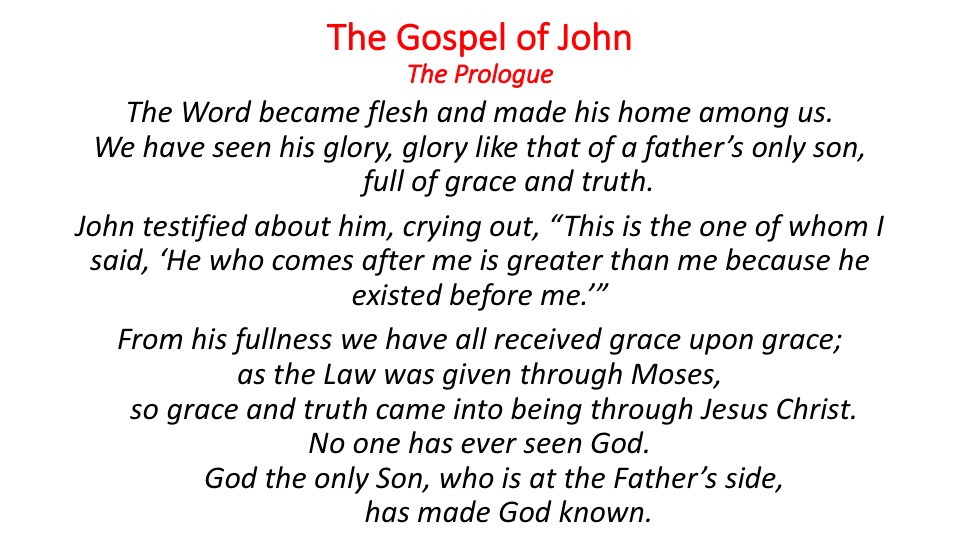 The Word became flesh and made his home among us.
We have seen his glory, glory like that of a father’s only son,
full of grace and truth.

John testified about him, crying out, “This is the one of whom I said, ‘He who comes after me is greater than me because he existed before me.’”

From his fullness we have all received grace upon grace;
as the Law was given through Moses,
so grace and truth came into being through Jesus Christ.
No one has ever seen God.
God the only Son, who is at the Father’s side,
has made God known. 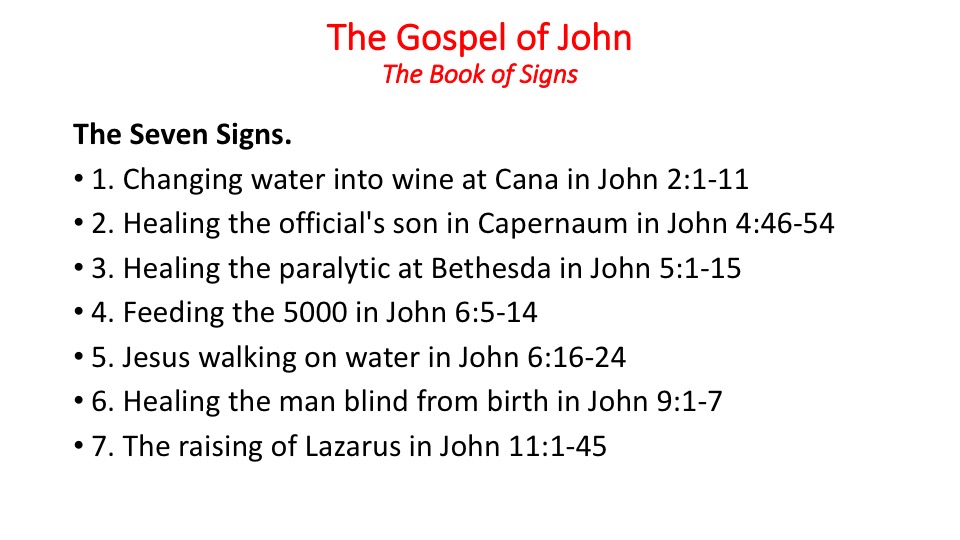 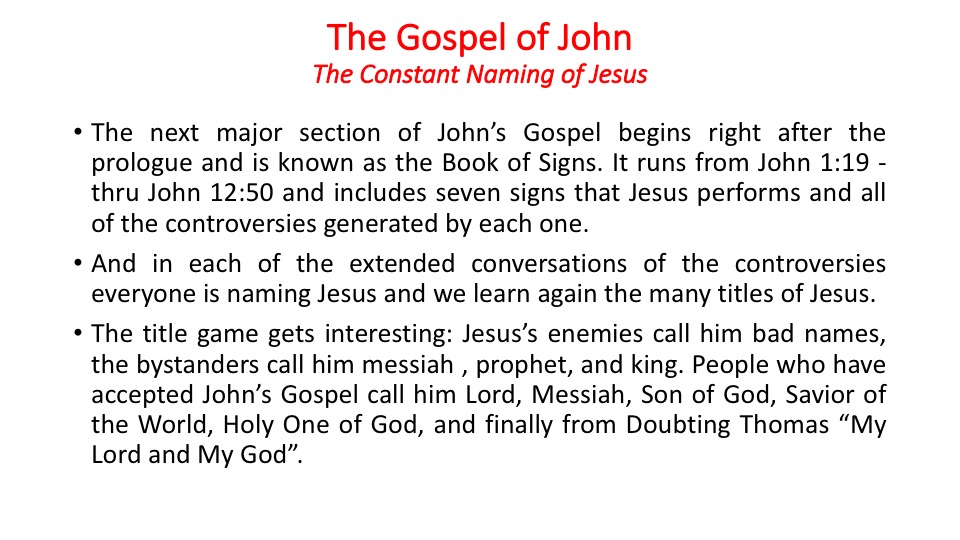 The next major section of John’s Gospel begins right after the prologue and is known as the Book of Signs. It runs from John 1:19 - thru John 12:50 and includes seven signs that Jesus performs and all of the controversies generated by each one.

And in each of the extended conversations of the controversies everyone is naming Jesus and we learn again the many titles of Jesus.

The title game gets interesting: Jesus’s enemies call him bad names, the bystanders call him messiah , prophet, and king. People who have accepted John’s Gospel call him Lord, Messiah, Son of God, Savior of the World, Holy One of God, and finally from Doubting Thomas “My Lord and My God”. 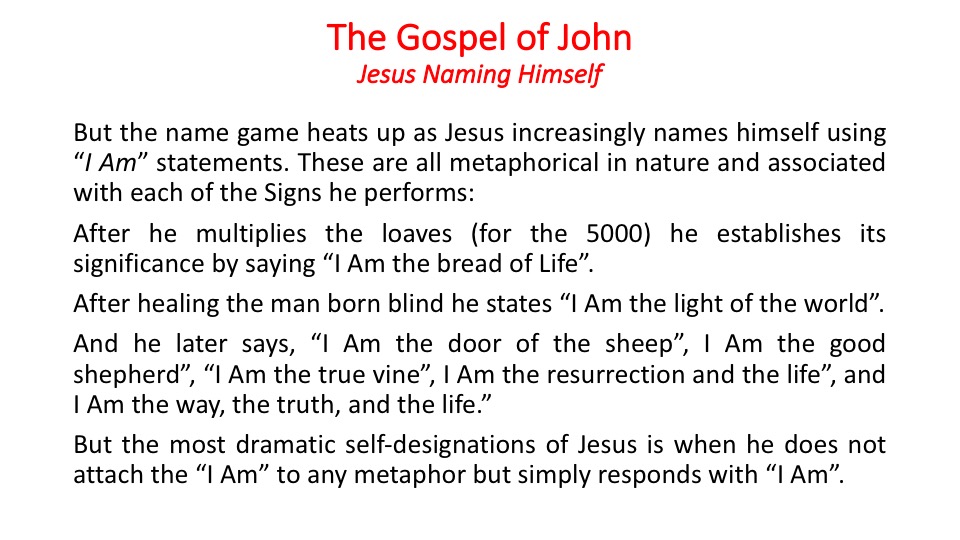 But the name game heats up as Jesus increasingly names himself using “I Am”” statements. These are all metaphorical in nature and associated with each of the Signs he performs:

After he multiplies the loaves (for the 5000) he establishes its significance by saying “I Am the bread of Life”.

After healing the man born blind he states “I Am the light of the world”.

But the most dramatic self-designations of Jesus is when he does not attach the “I Am” to any metaphor but simply responds with “I Am”. 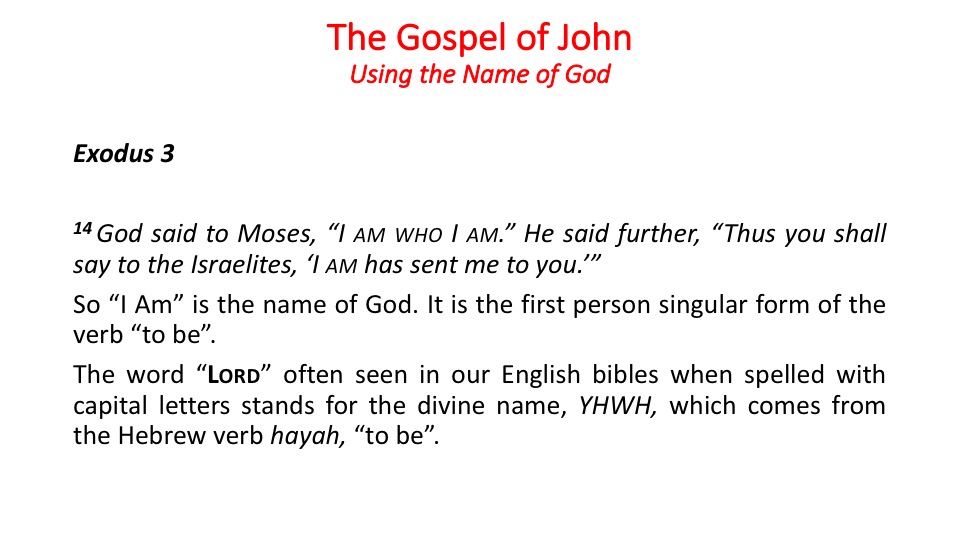 So “I Am” is the name of God. It is the first person singular form of the verb “to be”.

The word “Lord” often seen in our English bibles when spelled with capital letters stands for the divine name, YHWH, which comes from the Hebrew verb hayah, “to be”. 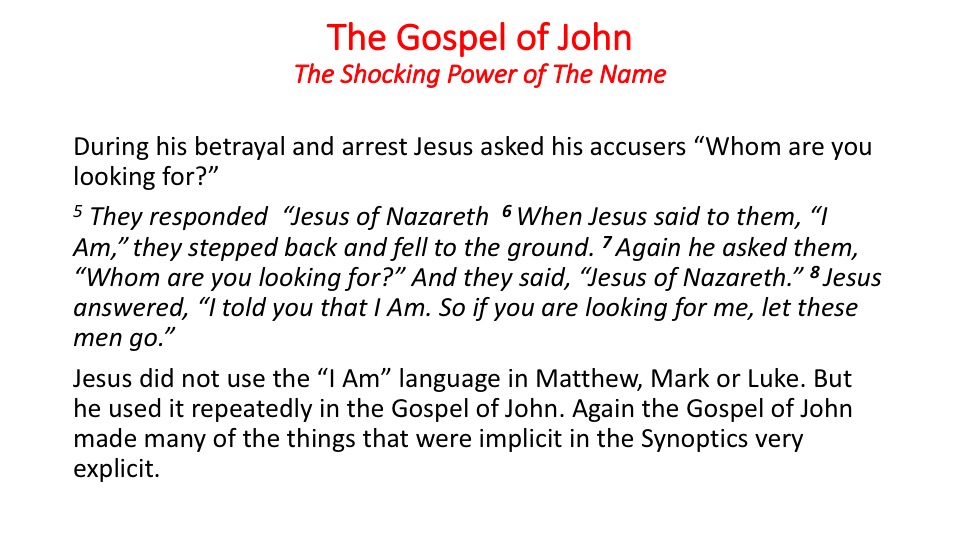 During his betrayal and arrest Jesus asked his accusers “Whom are you looking for?”

5 They responded  “Jesus of Nazareth  6 When Jesus said to them, “I Am,” they stepped back and fell to the ground. 7 Again he asked them, “Whom are you looking for?” And they said, “Jesus of Nazareth.” 8 Jesus answered, “I told you that I am. So if you are looking for me, let these men go.”

Jesus did not use the “I Am” language in Matthew, Mark or Luke. But he used it repeatedly in the Gospel of John. Again John made many of the things that were implicit in the Synoptics very explicit. 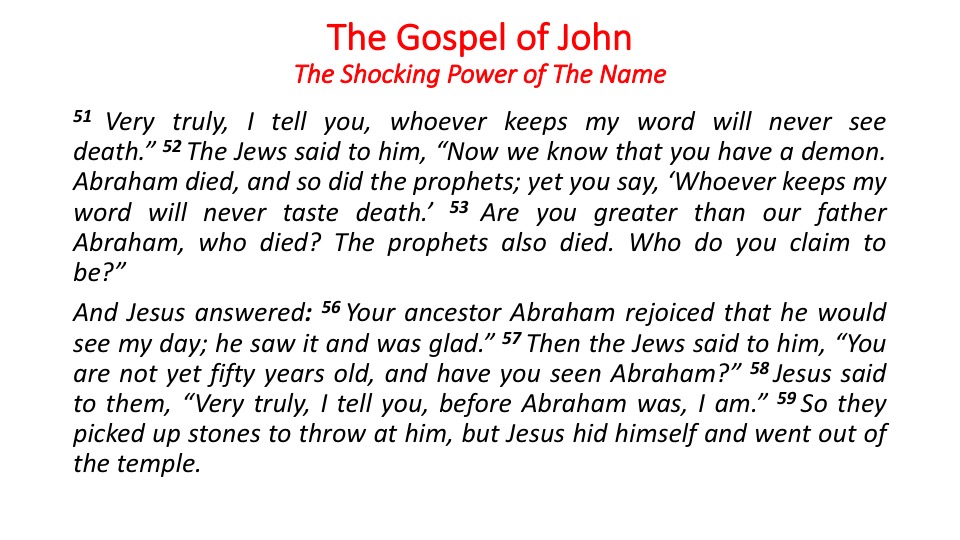 51 Very truly, I tell you, whoever keeps my word will never see death.” 52 The Jews said to him, “Now we know that you have a demon. Abraham died, and so did the prophets; yet you say, ‘Whoever keeps my word will never taste death.’ 53 Are you greater than our father Abraham, who died? The prophets also died. Who do you claim to be?” 54 Jesus answered, “If I glorify myself, my glory is nothing. It is my Father who glorifies me, he of whom you say, ‘He is our God,’ 55 though you do not know him. But I know him; if I would say that I do not know him, I would be a liar like you. But I do know him and I keep his word. 56 Your ancestor Abraham rejoiced that he would see my day; he saw it and was glad.” 57 Then the Jews said to him, “You are not yet fifty years old, and have you seen Abraham?”[k] 58 Jesus said to them, “Very truly, I tell you, before Abraham was, I am.” 59 So they picked up stones to throw at him, but Jesus hid himself and went out of the temple. 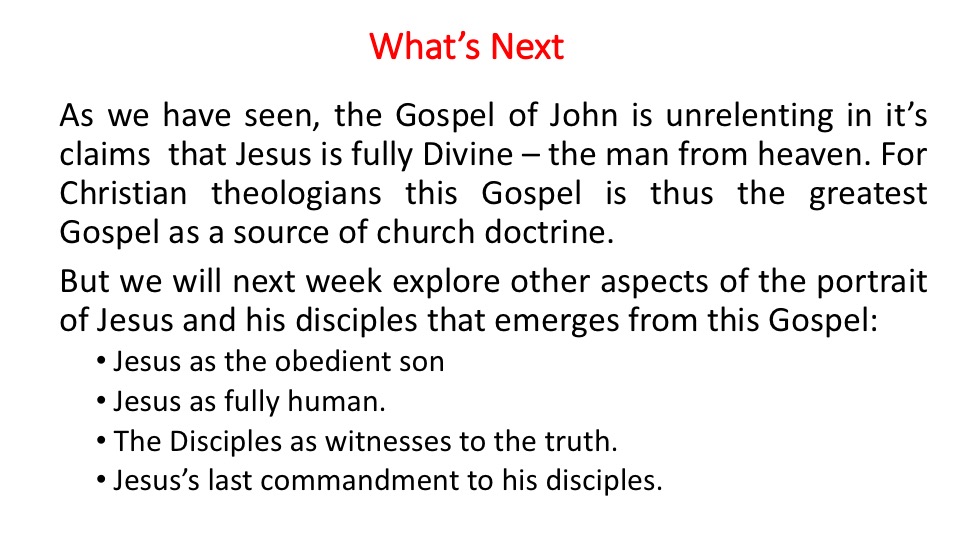 As we have seen, the Gospel of John is unrelenting in it’s claims  that Jesus is fully Divine – the man from heaven. For Christian theologians this Gospel is thus the greatest Gospel as a source of church doctrine.

But we will next week explore other aspects of the portrait of Jesus and his disciples that emerges from this Gospel: 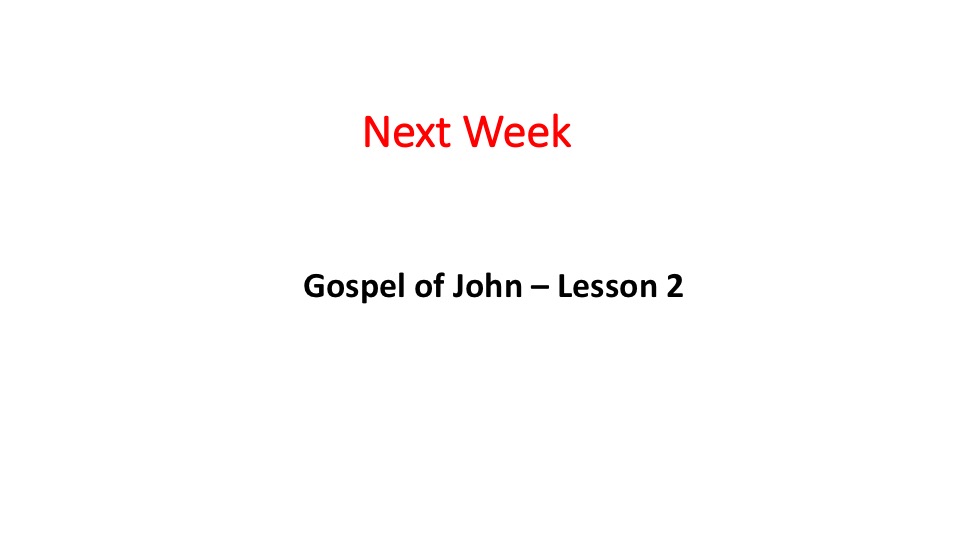