Catherine of Siena
One of the Great Christians 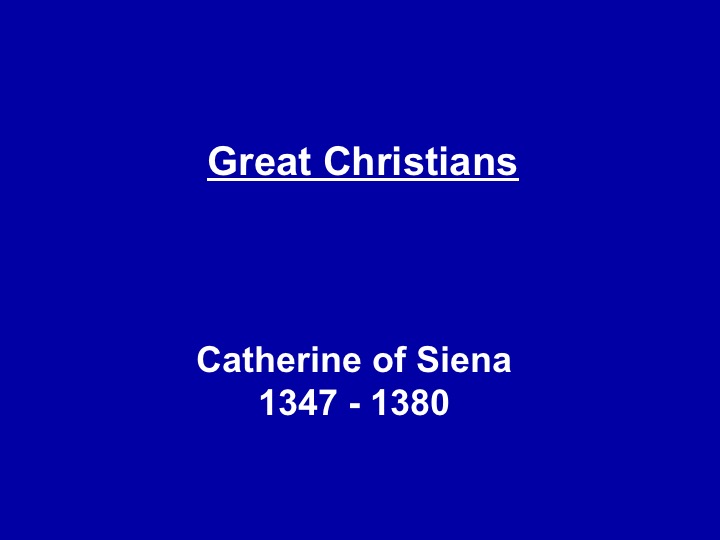 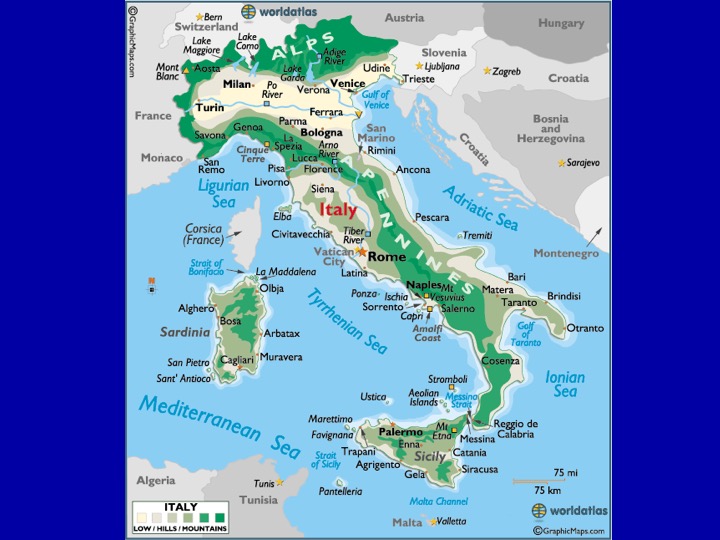 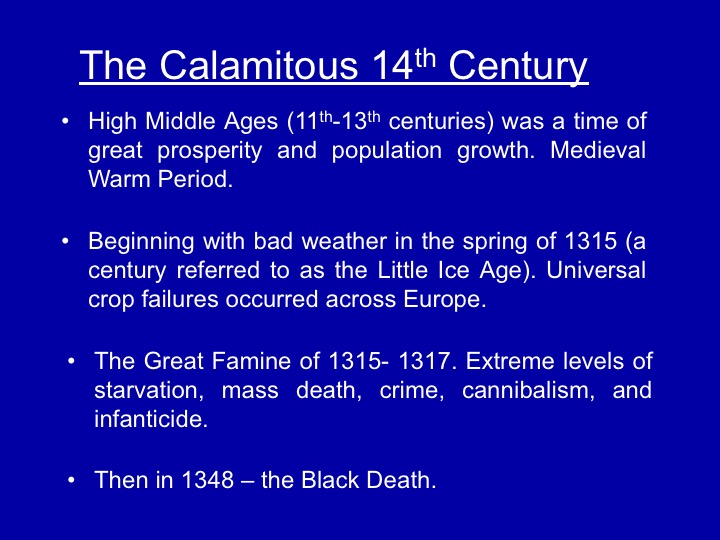 Beginning with bad weather in the spring of 1315 (a century referred to as the Little Ice Age). Universal crop failures occurred across Europe. 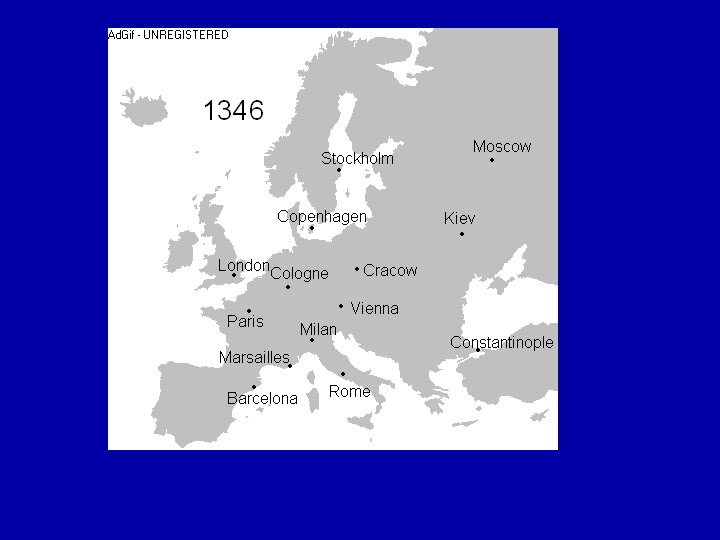 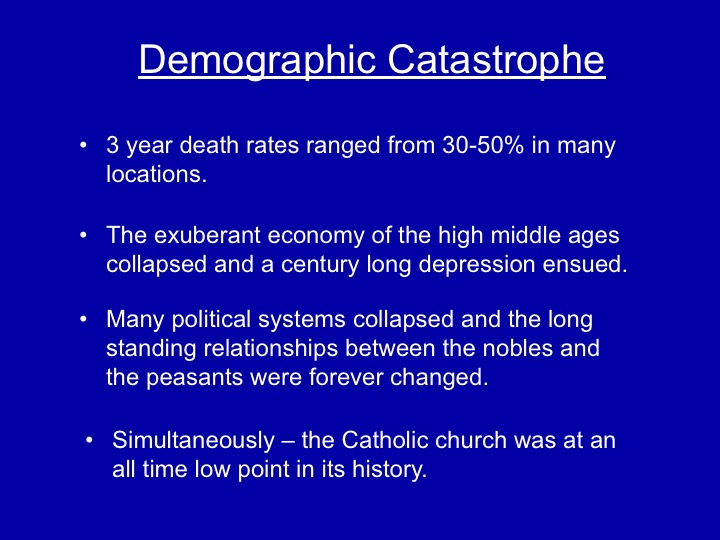 The exuberant economy of the high middle ages collapsed and a century long depression ensued.

Many political systems collapsed and the long standing relationships between the nobles and the peasants were forever changed.

Simultaneously – the Catholic church was at an all time low point in its history. 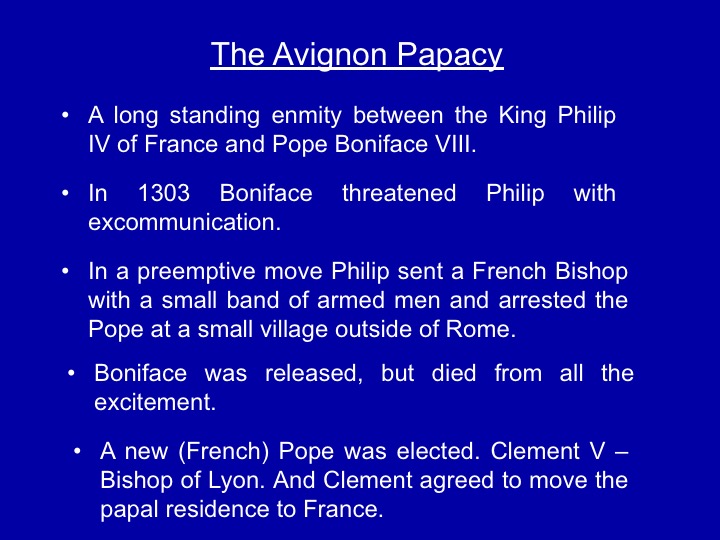 A long standing enmity between the King Philip IV of France and Pope Boniface VIII.

In 1303 Boniface threatened Philip with excommunication.

In a preemptive move Philip sent a French Bishop with a small band of armed men and arrested the Pope at a small village outside of Rome.

Boniface was released, but died from all the excitement.

A new (French) Pope was elected. Clement V – Bishop of Lyon. And Clement agreed to move the papal residence to France. 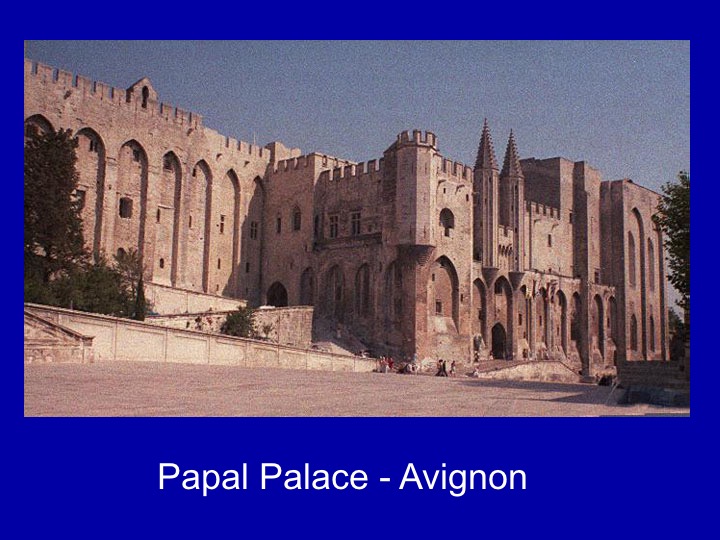 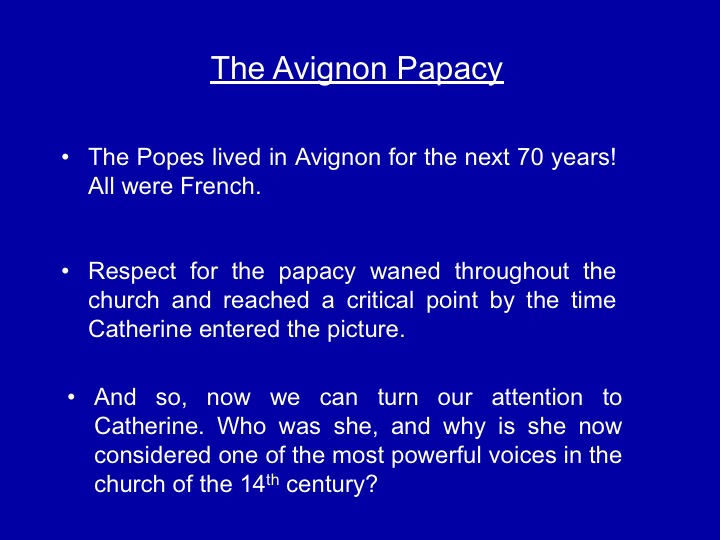 The Popes lived in Avignon for the next 70 years! All were French.

Respect for the papacy waned throughout the church and reached a critical point by the time Catherine entered the picture.

And so, now we can turn our attention to Catherine. Who was she, and why is she now considered one of the most powerful voices in the church of the 14th century? 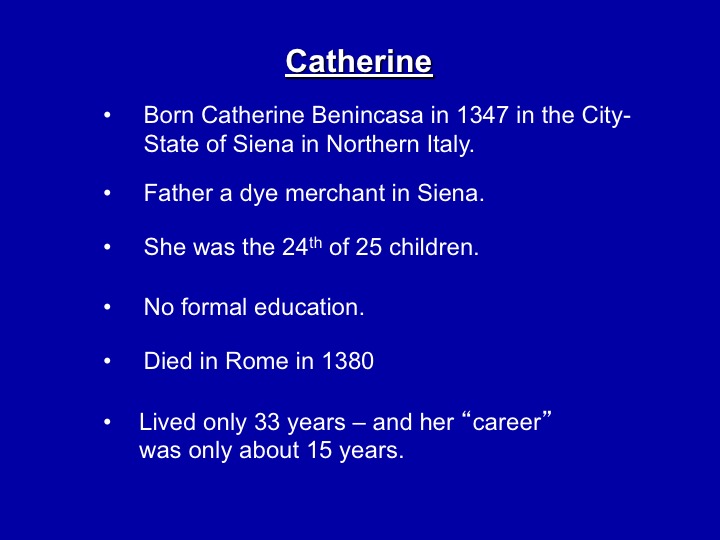 Born Catherine Benincasa in 1347 in the City-State of Siena in Northern Italy.

Father a dye merchant in Siena. 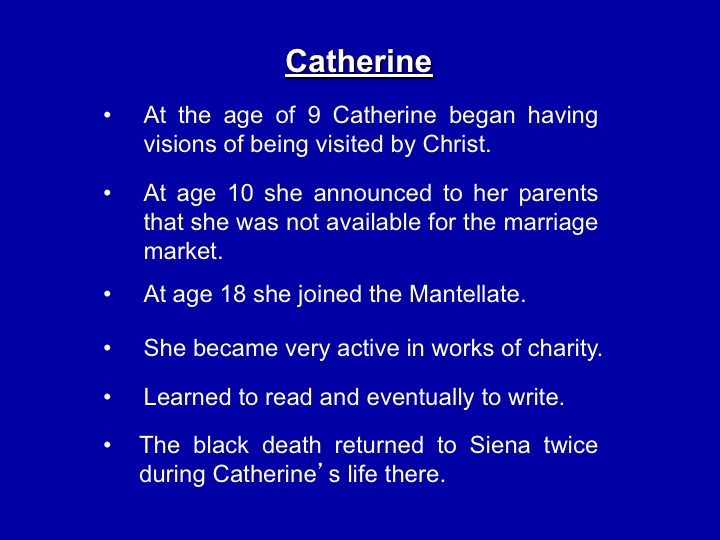 At the age of 9 Catherine began having visions of being visited by Christ.

At age 10 she announced to her parents that she was not available for the marriage market.

At age 18 she joined the Mantellate.

She became very active in works of charity.

Learned to read and eventually to write.

The black death returned to Siena twice during Catherine’s life there. 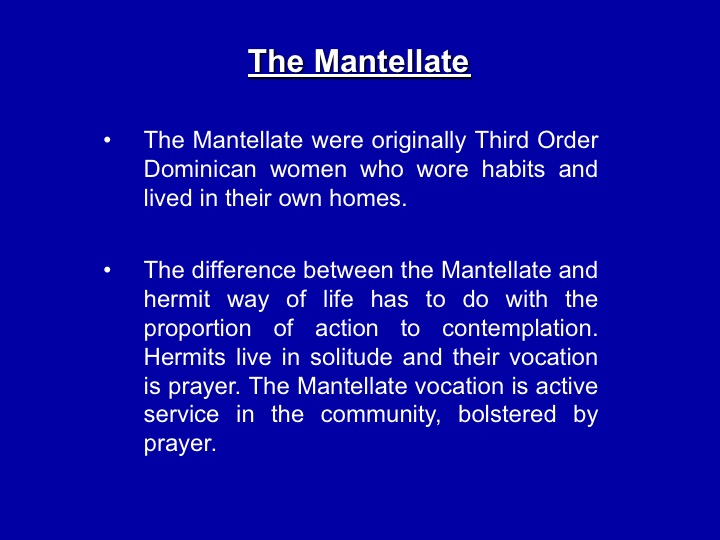 The Mantellate were originally Third Order Dominican women who wore habits and lived in their own homes.

The difference between the Mantellate and hermit way of life has to do with the proportion of action to contemplation. Hermits live in solitude and their vocation is prayer. The Mantellate vocation is active service in the community, bolstered by prayer. 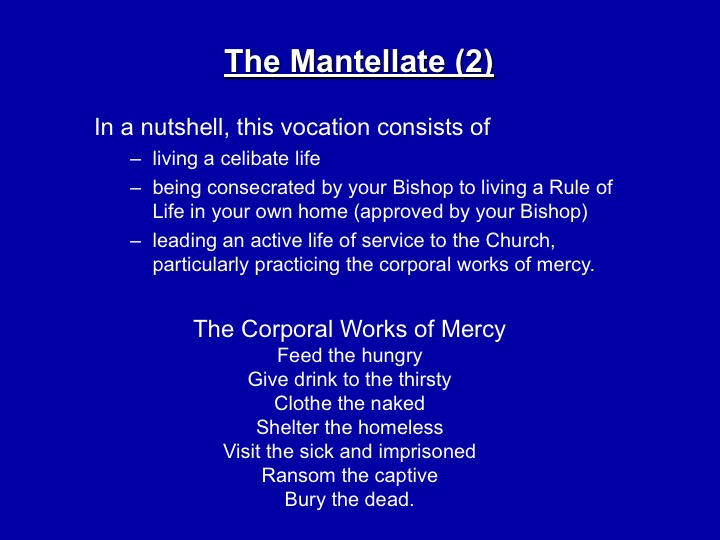 The Corporal Works of Mercy 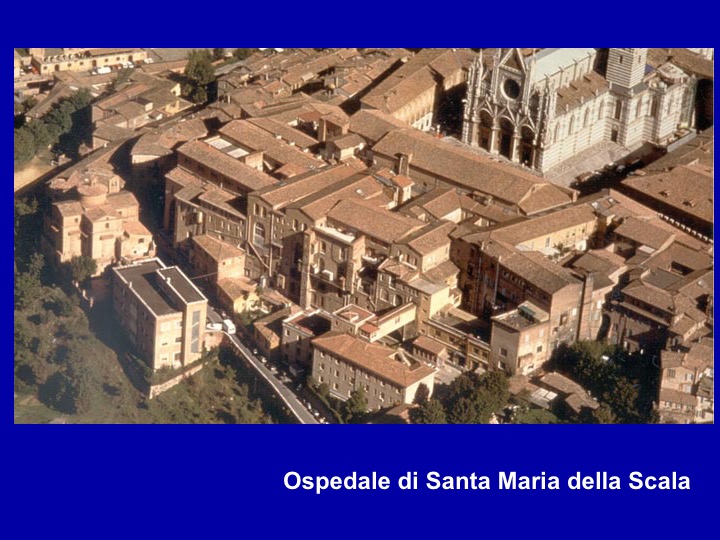 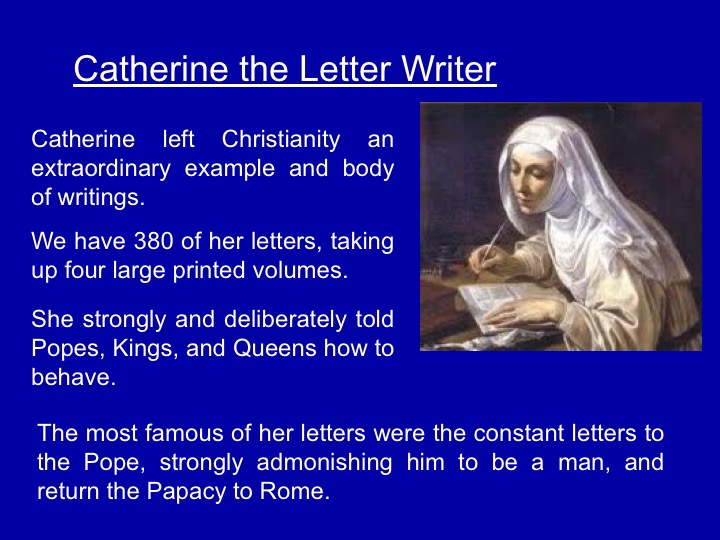 Catherine left Christianity an extraordinary example and body of writings.

We have 380 of her letters, taking up four large printed volumes.

She deliberately told popes, queens and kings how to behave. She was spontaneous, unafraid of authority and fearless in the face of death. She was a Dominican religious who corresponded with Popes and peasants alike.

The most famous of her letters were the constant letters to the Pope, strongly admonishing him to be a man, and return the Papacy to Rome. 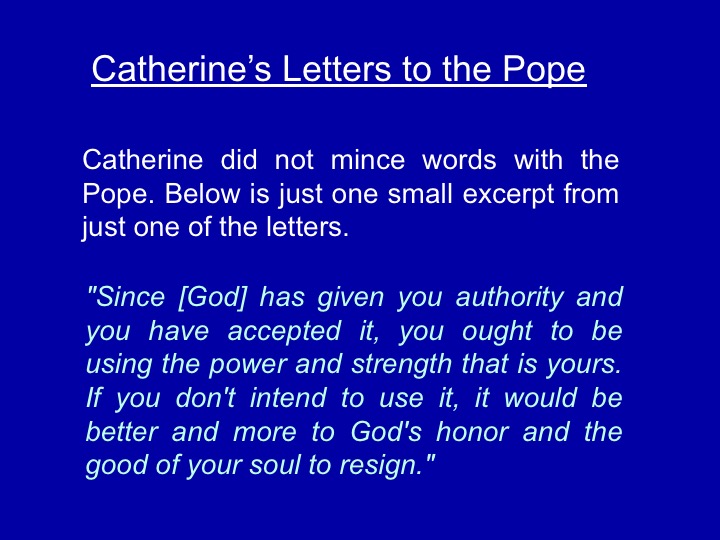 Catherine’s Letters to the Pope

Catherine did not mince words with the Pope. Below is just one small excerpt from just one of the letters.

"Since [God] has given you authority and you have accepted it, you ought to be using the power and strength that is yours. If you don't intend to use it, it would be better and more to God's honor and the good of your soul to resign." 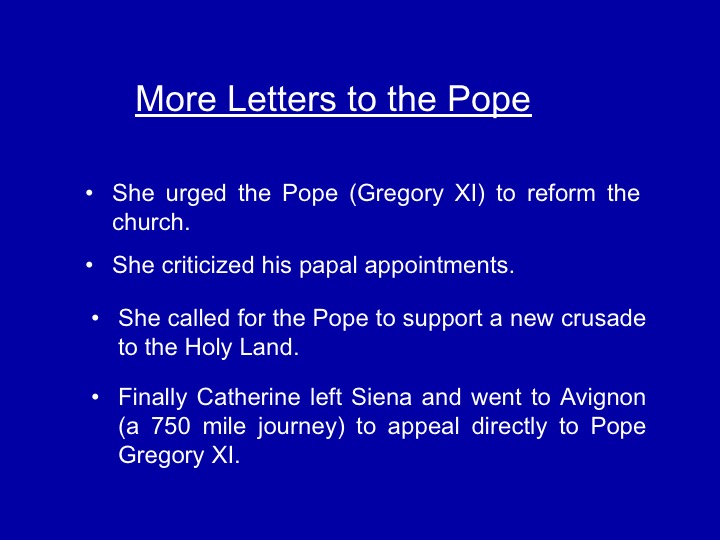 More Letters to the Pope

She urged the Pope (Gregory XI) to reform the church.

She criticized his papal appointments.

She called for the Pope to support a new crusade to the Holy Land. 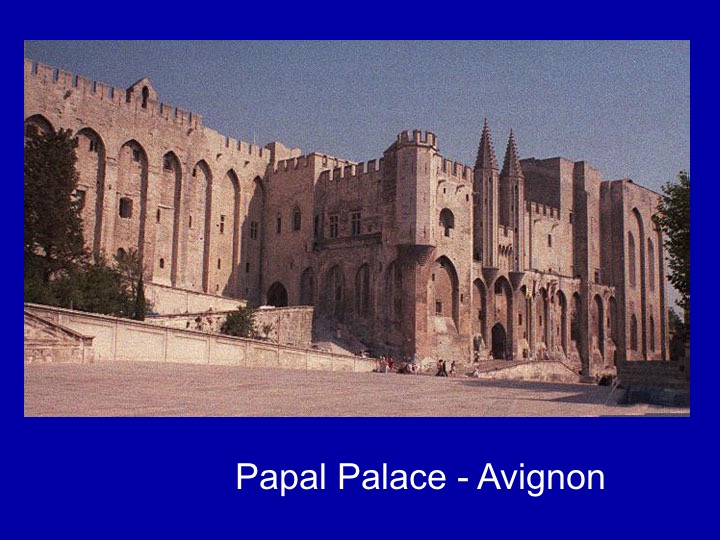 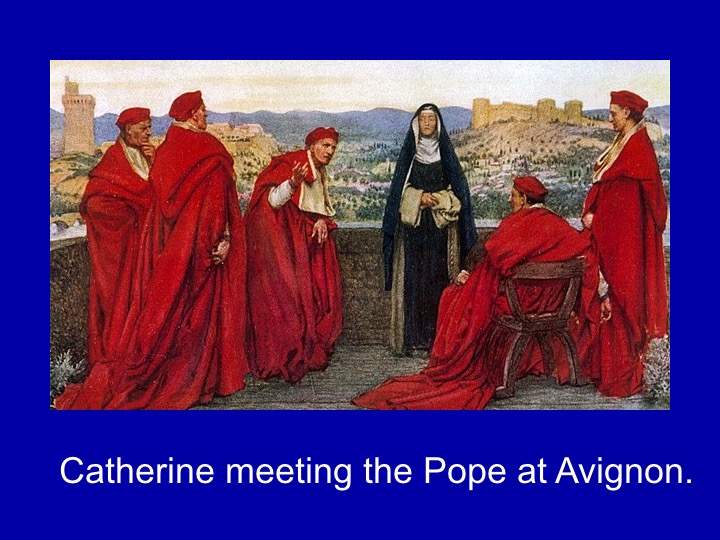 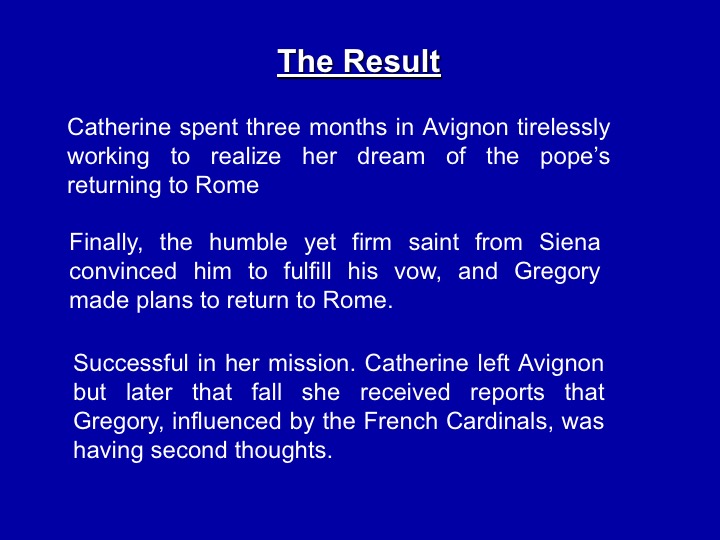 Catherine spent three months in Avignon tirelessly working to realize her dream of the pope’s returning to Rome. Gregory resisted and demurred, but she persisted.

Finally, the humble yet firm saint from Siena convinced him to fulfill his vow, and Gregory made plans to return to Rome.

Successful in her mission. Catherine left Avignon but later that fall she received reports that Gregory, influenced by the French Cardinals, was having second thoughts. 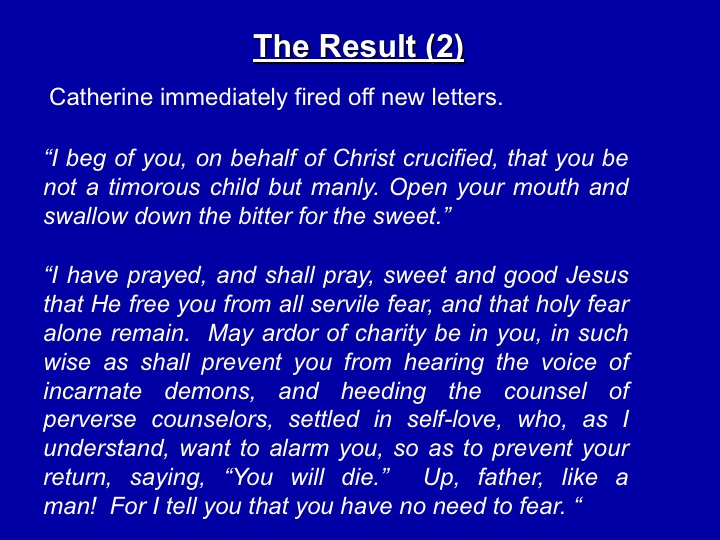 “I beg of you, on behalf of Christ crucified, that you be not a timorous child but manly. Open your mouth and swallow down the bitter for the sweet.”

“I have prayed, and shall pray, sweet and good Jesus that He free you from all servile fear, and that holy fear alone remain.  May ardor of charity be in you, in such wise as shall prevent you from hearing the voice of incarnate demons, and heeding the counsel of perverse counselors, settled in self-love, who, as I understand, want to alarm you, so as to prevent your return, saying, “You will die.”  Up, father, like a man!  For I tell you that you have no need to fear. “ 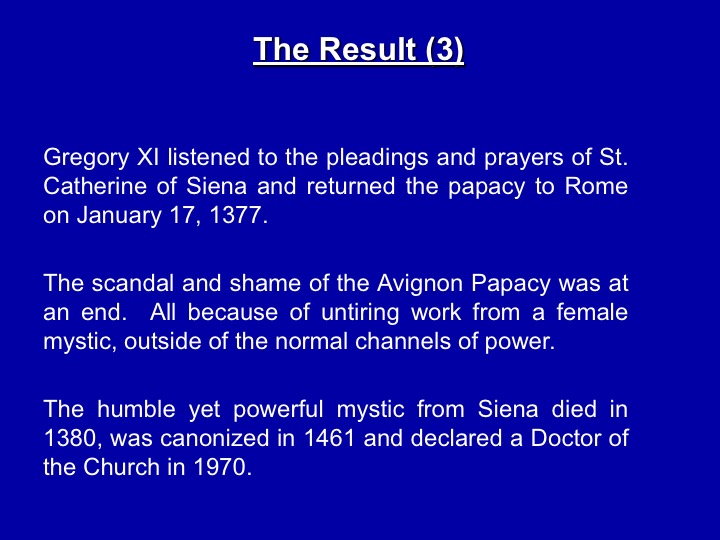 Gregory XI listened to the pleadings and prayers of St. Catherine of Siena and returned the papacy to Rome on January 17, 1377.

The scandal and shame of the Avignon Papacy was at an end.  All because of untiring work from a female mystic, outside of the normal channels of power.

The humble yet powerful mystic from Siena died in 1380, was canonized in 1461 and declared a Doctor of the Church in 1970. 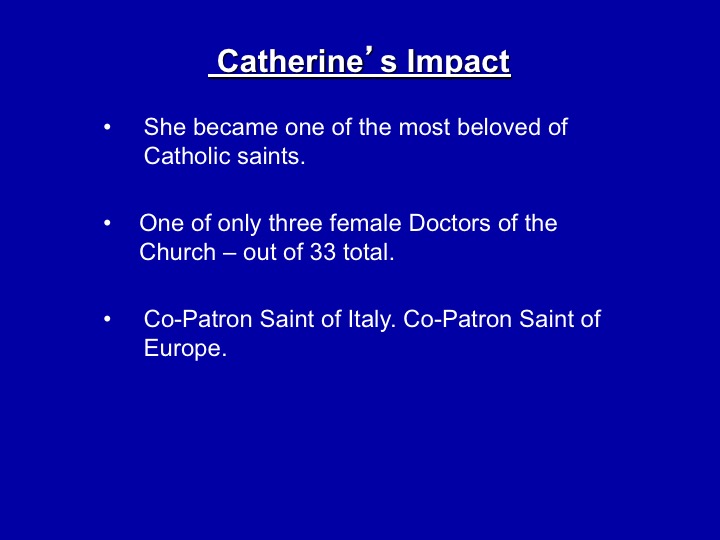 She became one of the most beloved of Catholic saints.

One of only three female Doctors of the Church – out of 33 total. 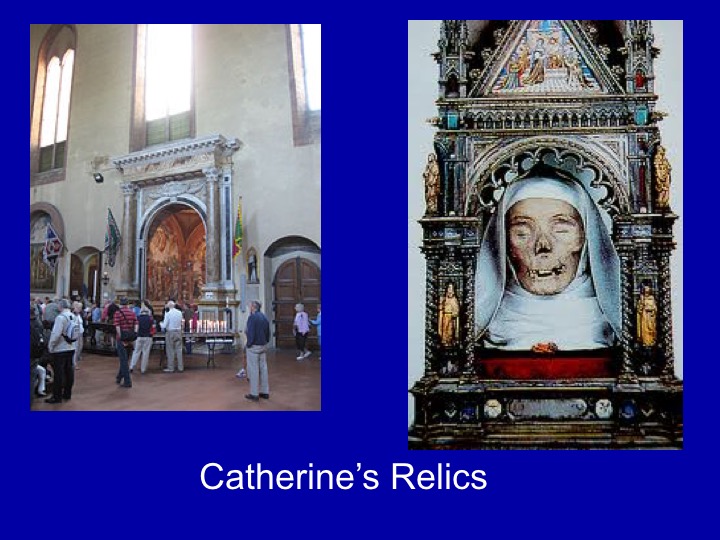 Catherine of Siena - One of the Great Christians