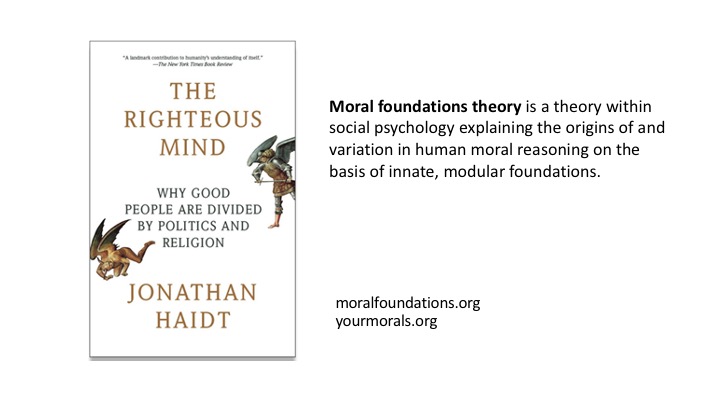 Moral foundations theory is a theory within social psychology explaining the origins of and variation in human moral reasoning on the basis of innate, modular foundations.

Information on The Righteous Mind can be found at  moralfoundations.org  and at yourmorals.org 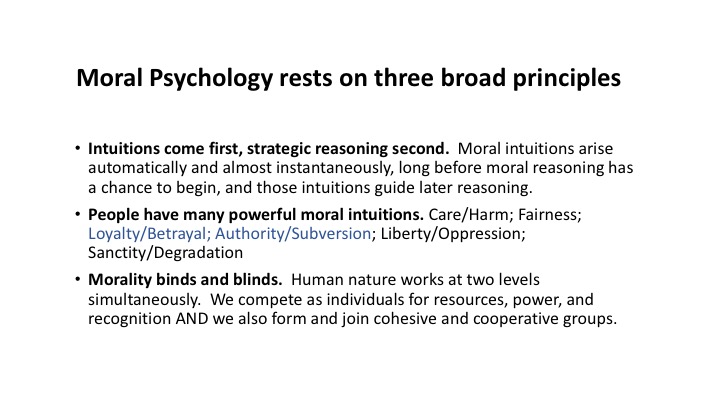 Morality binds and blinds.  Human nature works at two levels simultaneously.  We compete as individuals for resources, power, and recognition AND we also form and join cohesive and cooperative groups. 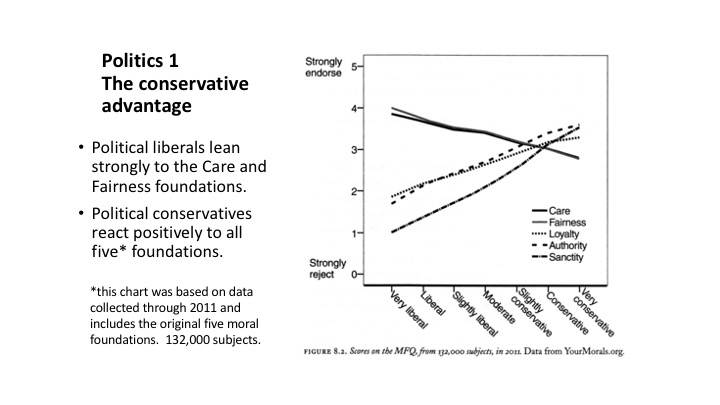 Political liberals lean strongly to the Care and Fairness foundations.

*this chart was based on data collected through 2011 and includes the original five moral foundations.  132,000 subjects. 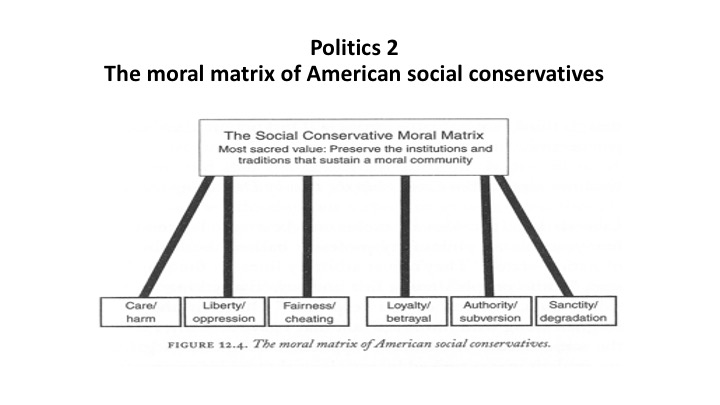 In the Social Conservative Moral Matrix the most sacred value is to preserve the institutions and traditions that sustain a moral community. 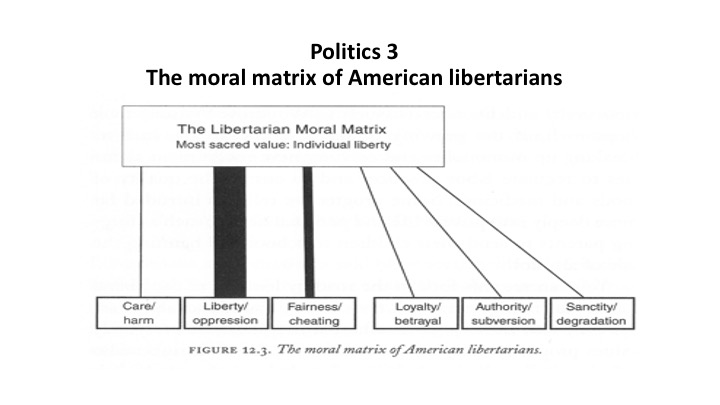 For Libertarians, the most sacred value is individual liberty. 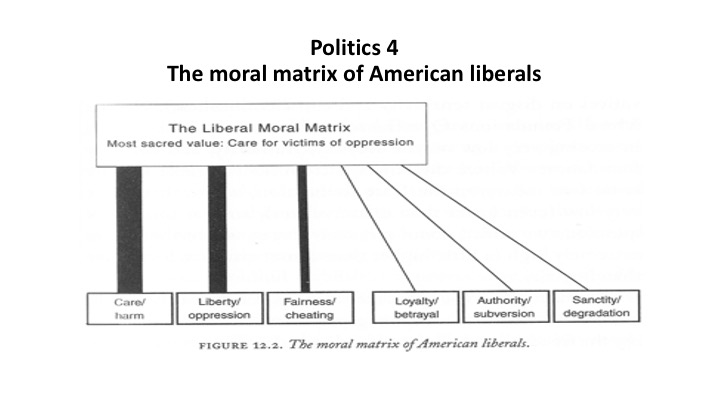 In the liberal moral matrix,  the most sacred value is care for the victims of oppression. 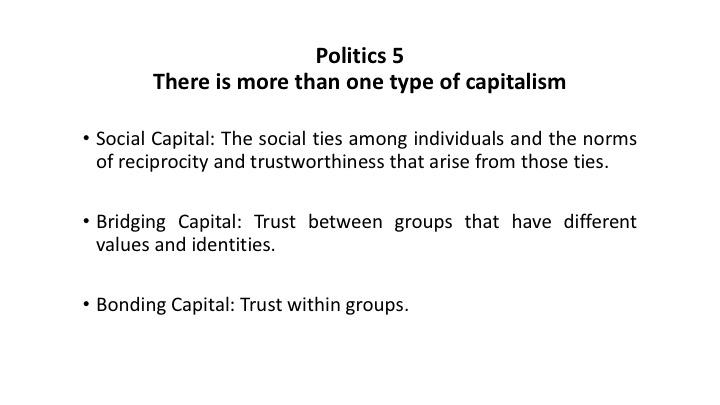 Politics 5
There is more than one type of capitalism

Social Capital: The social ties among individuals and the norms of reciprocity and trustworthiness that arise from those ties.

Bridging Capital: Trust between groups that have different values and identities. 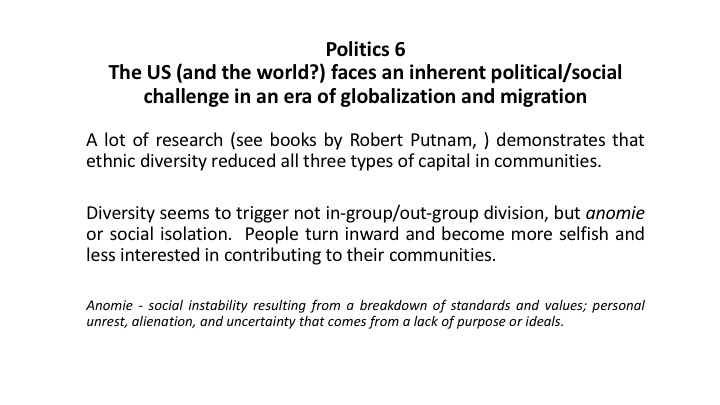 Politics 6
The US (and the world?) faces an inherent political/social challenge in an era of globalization and migration

A lot of research (see books by Robert Putnam) demonstrates that ethnic diversity reduced all three types of capital in communities.

Diversity seems to trigger not in-group/out-group division, but anomie or social isolation.  People turn inward and become more selfish and less interested in contributing to their communities.

Anomie - social instability resulting from a breakdown of standards and values; personal unrest, alienation, and uncertainty that comes from a lack of purpose or ideals. 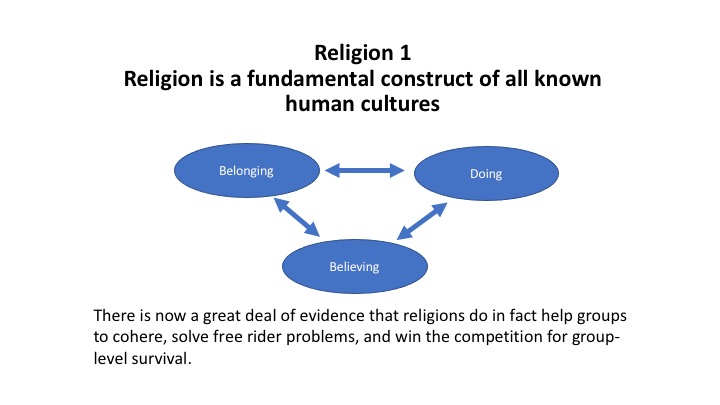 There is now a great deal of evidence that religions do in fact help groups to cohere, solve free rider problems, and win the competition for group-level survival. 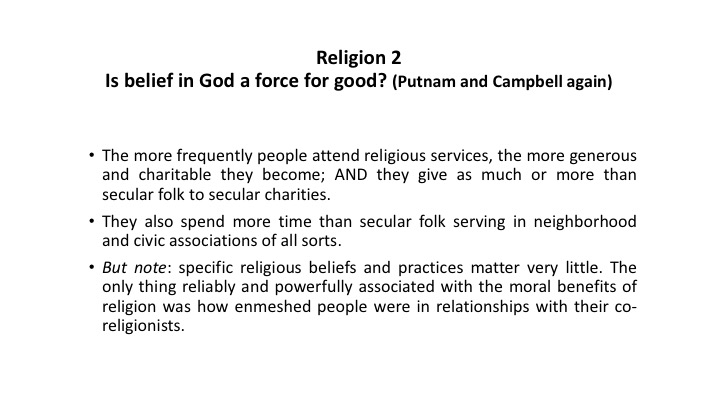 Religion 2
Is belief in God a force for good? (Putnam and Campbell again)

The more frequently people attend religious services, the more generous and charitable they become; AND they give as much or more than secular folk to secular charities.

They also spend more time than secular folk serving in neighborhood and civic associations of all sorts.

But note: specific religious beliefs and practices matter very little. The only thing reliably and powerfully associated with the moral benefits of religion was how enmeshed people were in relationships with their co-religionists. 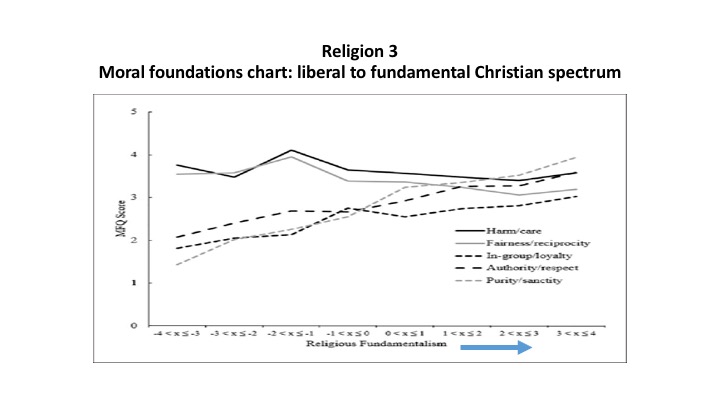 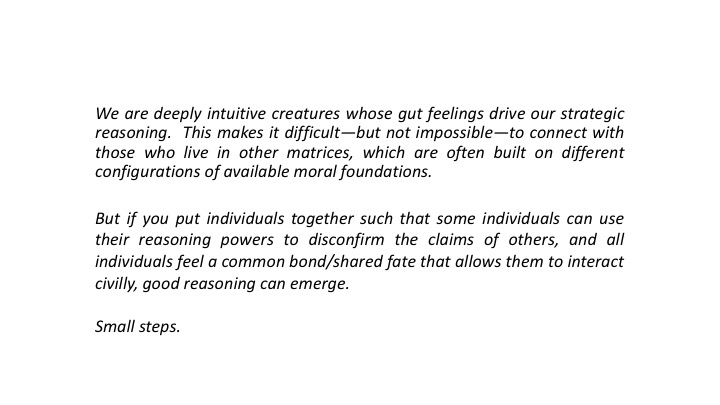 We are deeply intuitive creatures whose gut feelings drive our strategic reasoning.  This makes it difficult—but not impossible—to connect with those who live in other matrices, which are often built on different configurations of available moral foundations.

But if you put individuals together such that some individuals can use their reasoning powers to disconfirm the claims of others, and all individuals feel a common bond/shared fate that allows them to interact civilly, good reasoning can emerge. 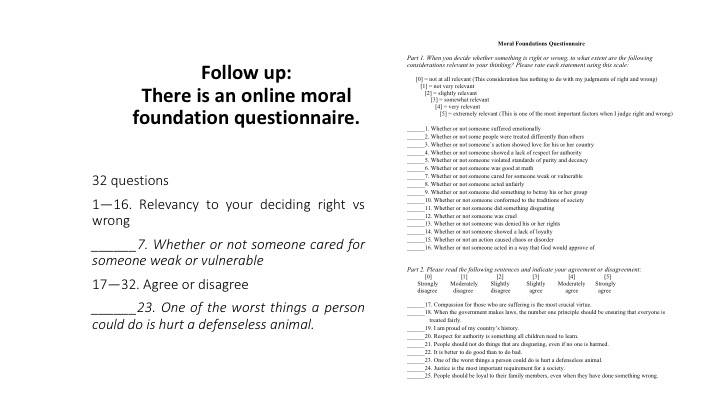 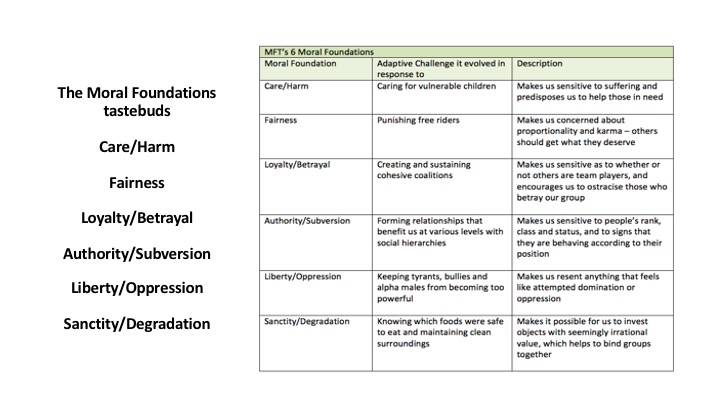