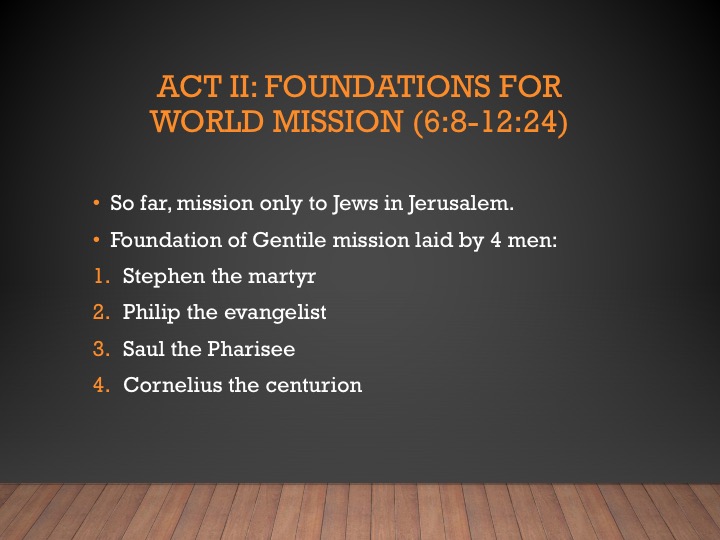 So far, mission only to Jews in Jerusalem. 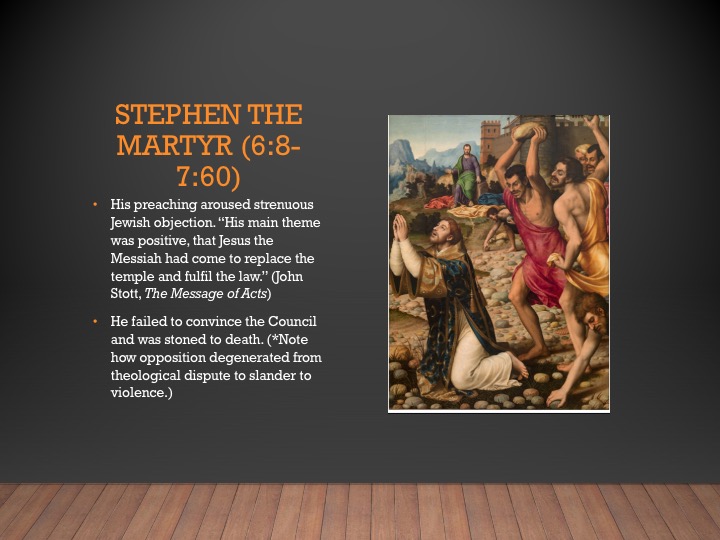 His preaching aroused strenuous Jewish objection. “His main theme was positive, that Jesus the Messiah had come to replace the temple and fulfil the law.” (John Stott, The Message of Acts)

He failed to convince the Council and was stoned to death. (*Note how opposition degenerated from theological dispute to slander to violence.) 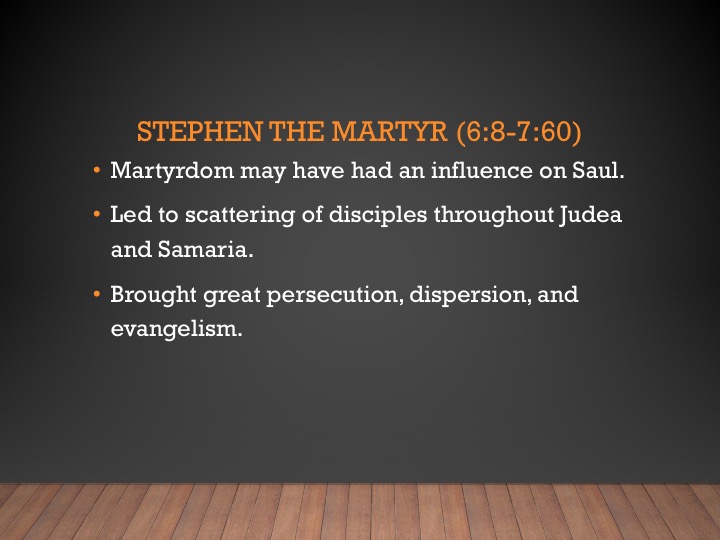 Martyrdom may have had an influence on Saul.

Led to scattering of disciples throughout Judea and Samaria. 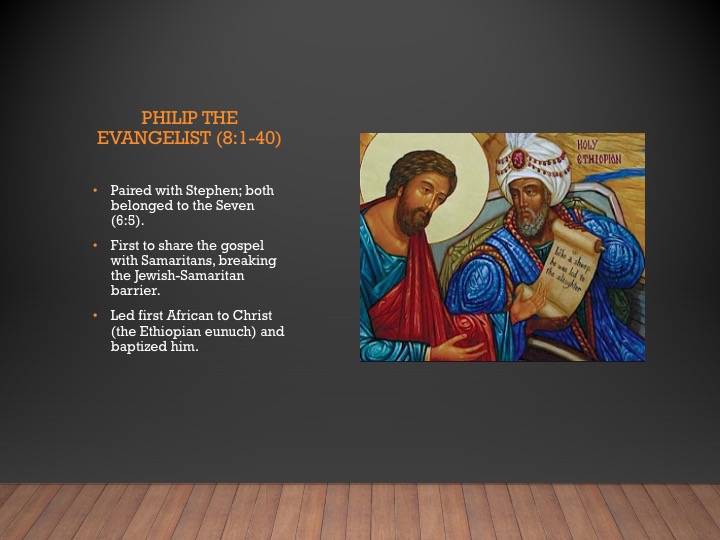 Paired with Stephen; both belonged to the Seven (6:5).

First to share the gospel with Samaritans, breaking the Jewish-Samaritan barrier.

Led first African to Christ (the Ethiopian eunuch) and baptized him. 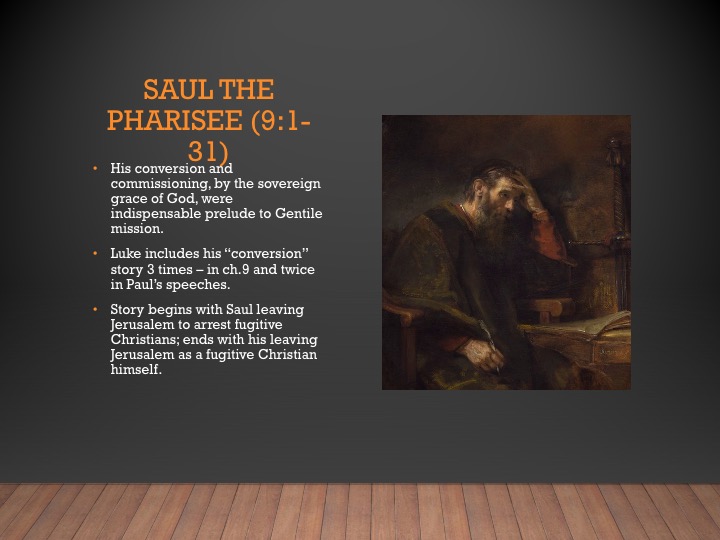 His conversion and commissioning, by the sovereign grace of God, were indispensable prelude to Gentile mission.

Luke includes his “conversion” story 3 times – in ch.9 and twice in Paul’s speeches. 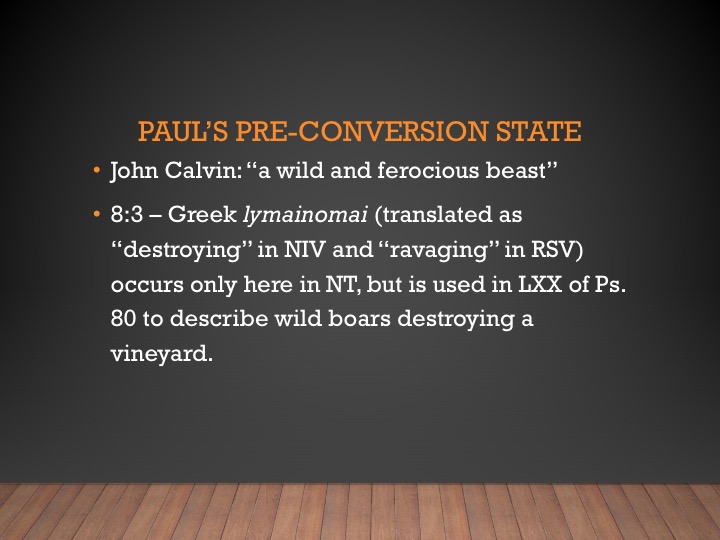 8:3 – Greek lymainomai (translated as “destroying” in NIV and “ravaging” in RSV) occurs only here in NT, but is used in LXX of Ps. 80 to describe wild boars destroying a vineyard. 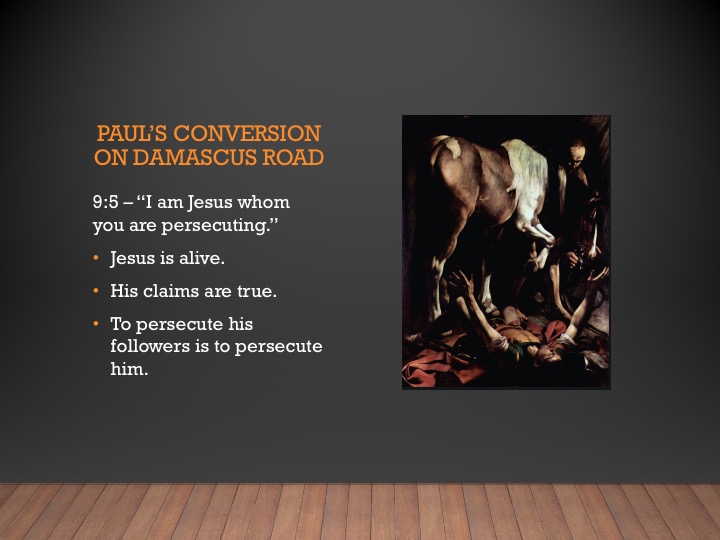 His claims are true. 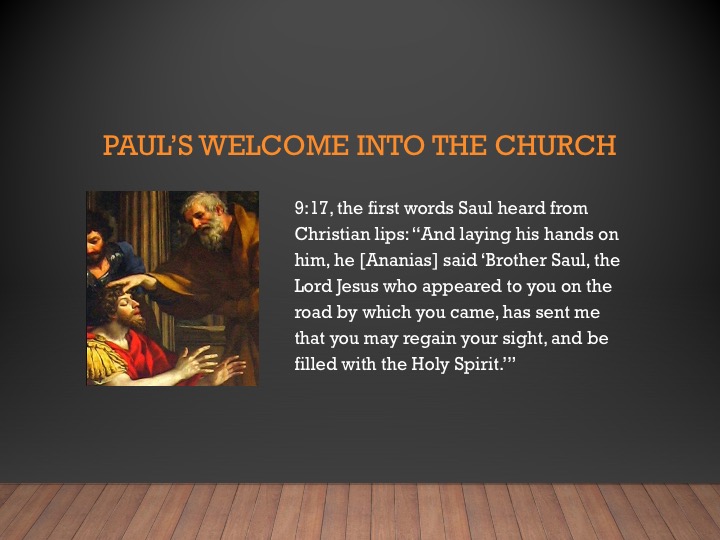 Paul’s Welcome into the Church

9:17, the first words Saul heard from Christian lips: “And laying his hands on him, he [Ananias] said ‘Brother Saul, the Lord Jesus who appeared to you on the road by which you came, has sent me that you may regain your sight, and be filled with the Holy Spirit.’” 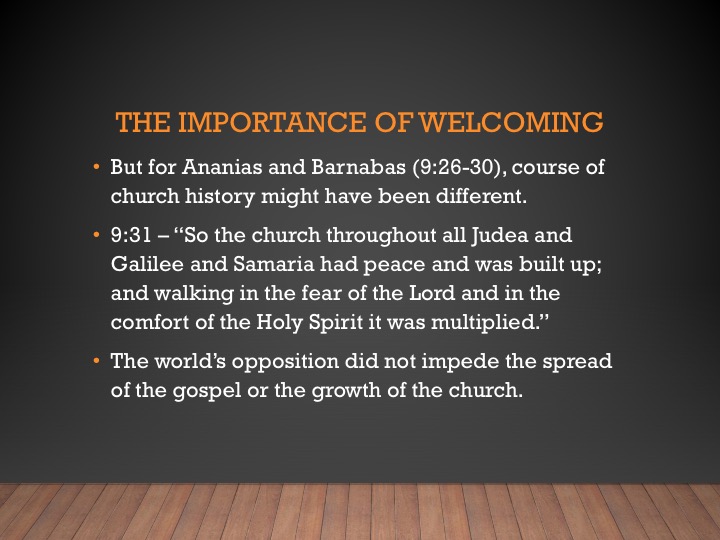 The Importance of Welcoming

But for Ananias and Barnabas (9:26-30), course of church history might have been different.

9:31 – “So the church throughout all Judea and Galilee and Samaria had peace and was built up; and walking in the fear of the Lord and in the comfort of the Holy Spirit it was multiplied.”

The world’s opposition did not impede the spread of the gospel or the growth of the church. 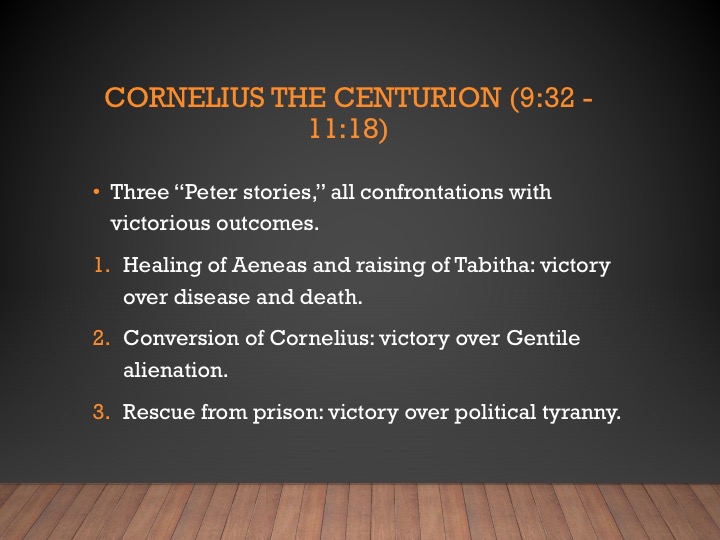 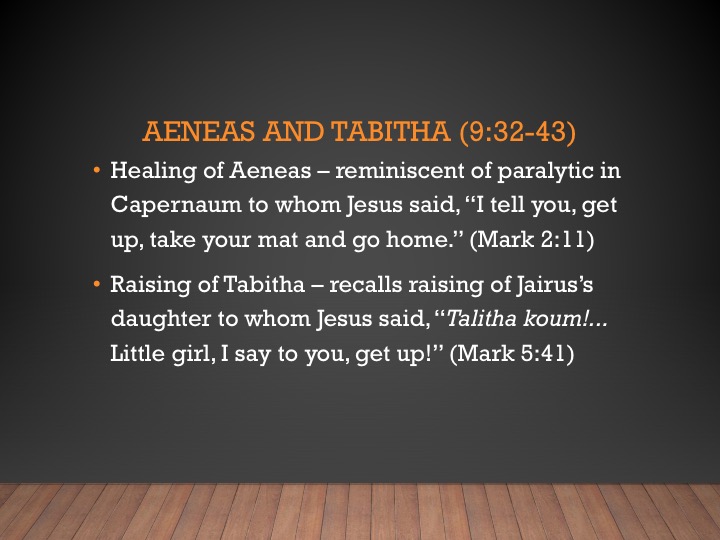 Healing of Aeneas – reminiscent of paralytic in Capernaum to whom Jesus said, “I tell you, get up, take your mat and go home.” (Mark 2:11)

Raising of Tabitha – recalls raising of Jairus’s daughter to whom Jesus said, “Talitha koum!... Little girl, I say to you, get up!” (Mark 5:41) 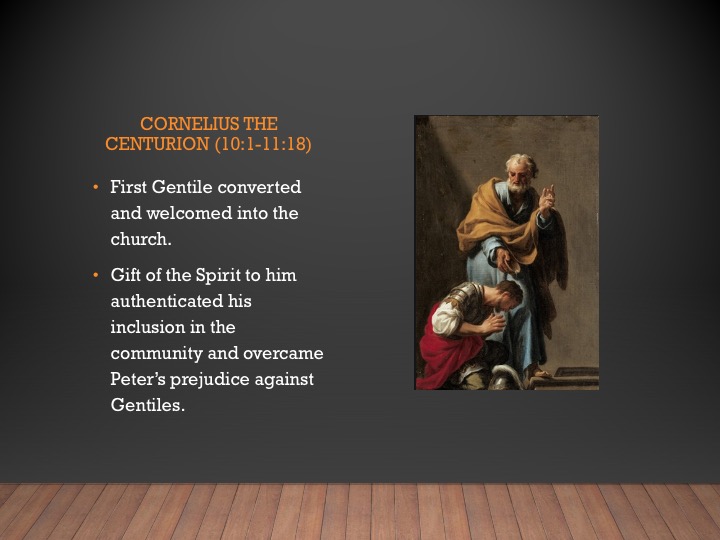 First Gentile converted and welcomed into the church.

Gift of the Spirit to him authenticated his inclusion in the community and overcame Peter’s prejudice against Gentiles. 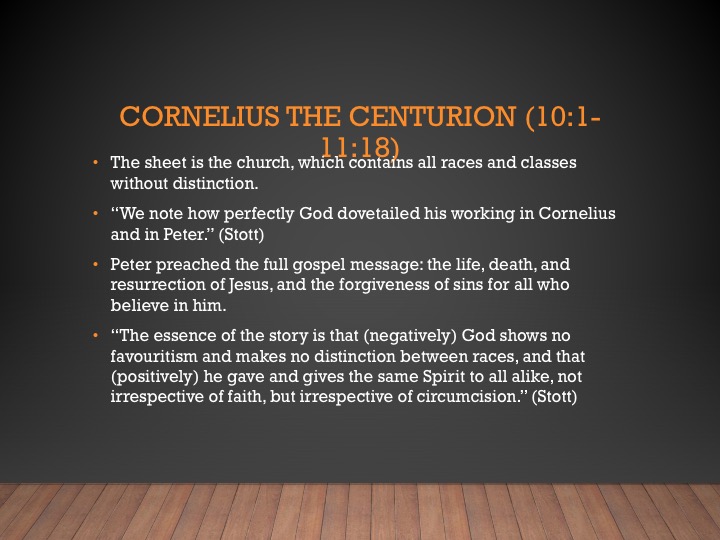 The sheet is the church, which contains all races and classes without distinction.

“We note how perfectly God dovetailed his working in Cornelius and in Peter.” (Stott)

Peter preached the full gospel message: the life, death, and resurrection of Jesus, and the forgiveness of sins for all who believe in him.

“The essence of the story is that (negatively) God shows no favouritism and makes no distinction between races, and that (positively) he gave and gives the same Spirit to all alike, not irrespective of faith, but irrespective of circumcision.” (Stott) 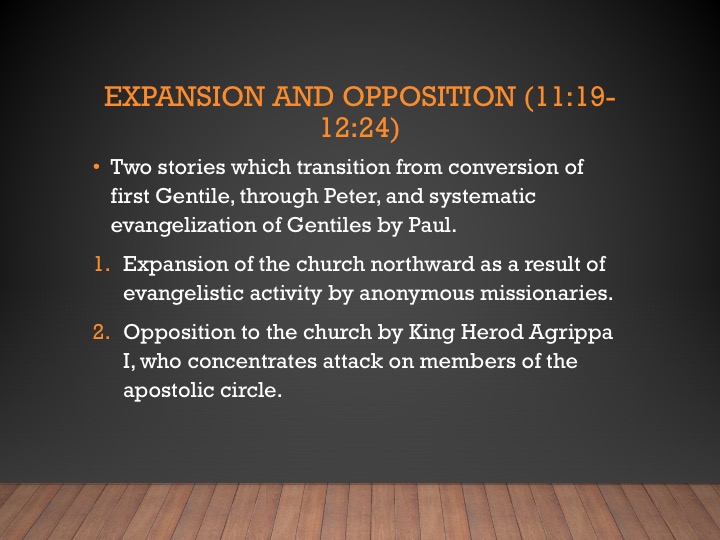 Two stories which transition from conversion of first Gentile, through Peter, and systematic evangelization of Gentiles by Paul.

1.Expansion of the church northward as a result of evangelistic activity by anonymous missionaries.

2.Opposition to the church by King Herod Agrippa I, who concentrates attack on members of the apostolic circle. 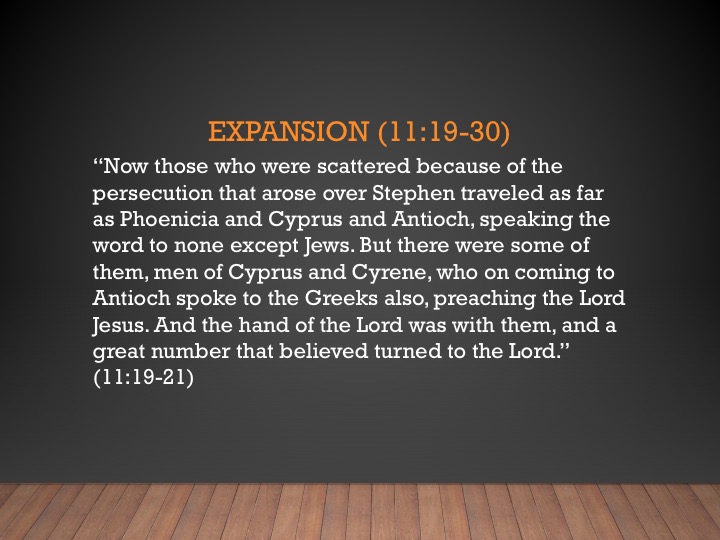 “Now those who were scattered because of the persecution that arose over Stephen traveled as far as Phoenicia and Cyprus and Antioch, speaking the word to none except Jews. But there were some of them, men of Cyprus and Cyrene, who on coming to Antioch spoke to the Greeks also, preaching the Lord Jesus. And the hand of the Lord was with them, and a great number that believed turned to the Lord.” (11:19-21) 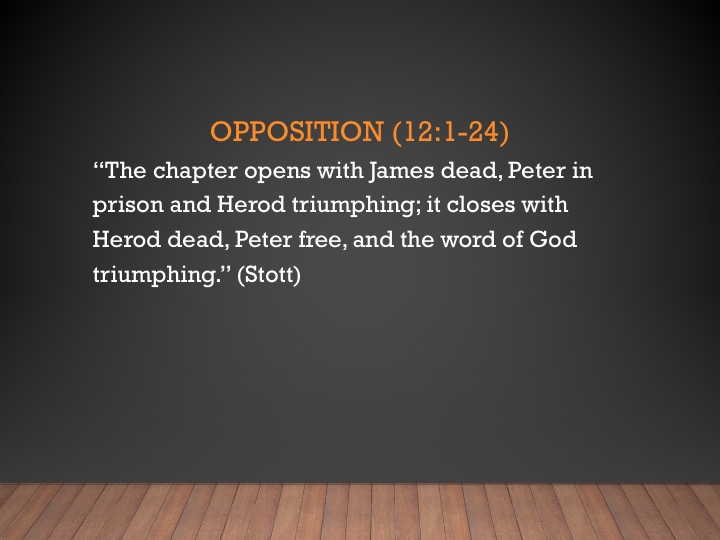 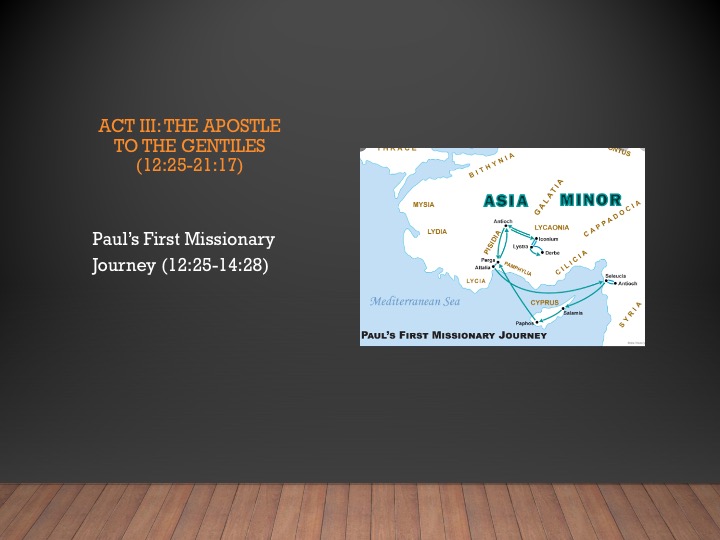