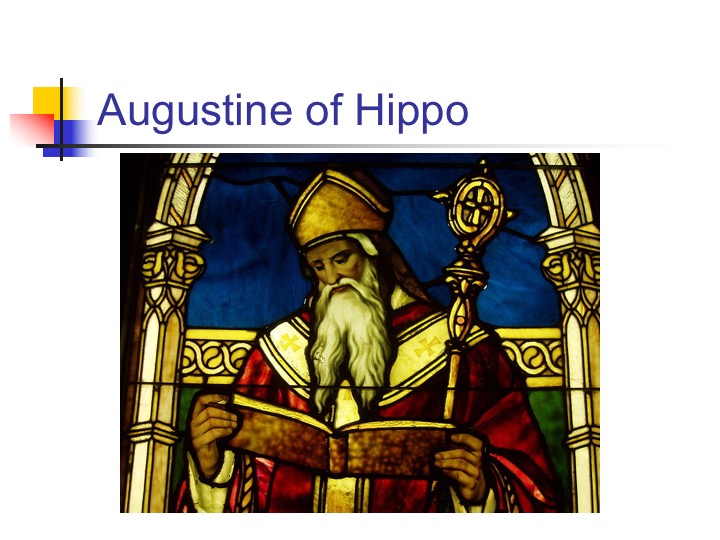 The subject of these two weeks is the famous Doctor of the Catholic church – Augustine of Hippo and in particular about his most famous book, the Confessions.

This first week we  we are going to talk about who Augustine was - because most Christians have only a vague idea.

This first slide is a rendering of Augustine - but in fact we have no idea what he looked like.  If you Google Augustine images you get many different looking dudes.

But one of the obvious questions you might have is - Why would modern Christians, particularly Protestant ones, be that interested in this early Catholic?

This week I call Augustine in Context - we are going to try to understand why he is important and to do that we have to put him in the context of 4th century Christianity and 4th Century Roman  history.

Next week we will plunge into The Confessions - his most important book. 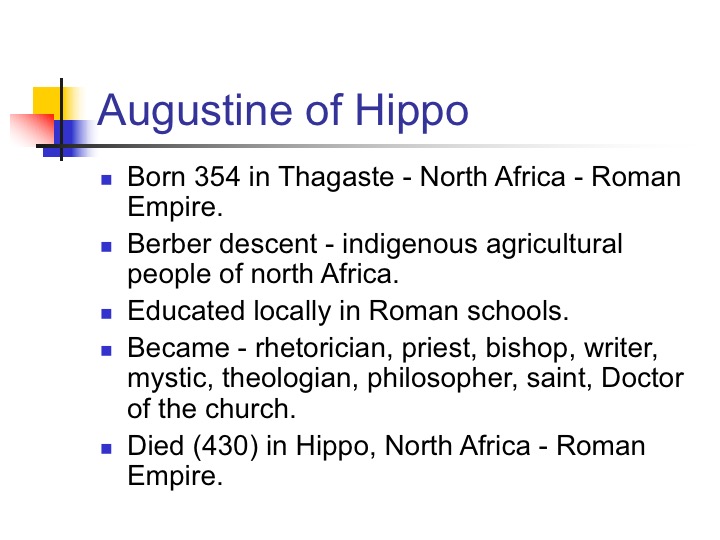 But let's begin with a very brief timeline of his life.

Let’s start with a brief timeline of Augustine’s life.

One thing that is important to understand – he was born (and later died) in northern Africa in a place called Thagaste. It was definitely in the Roman Empire because the Roman armies had conquered a significant part of Northern Africa along the Mediterranean coast in about 146BC at the end of the third Punic war. The inhabitants were mostly from an African Berber tribe.

And Augustine was a Berber – they were indigenous agricultural people of north Africa.

But this area had become Romanized and Augustine was educated locally in Roman schools.

He thrived in his education – and eventually became a rhetorician, priest, a bishop, a prolific writer, a renowned theologian, philosopher, eventually a saint, and a Doctor of the Church. 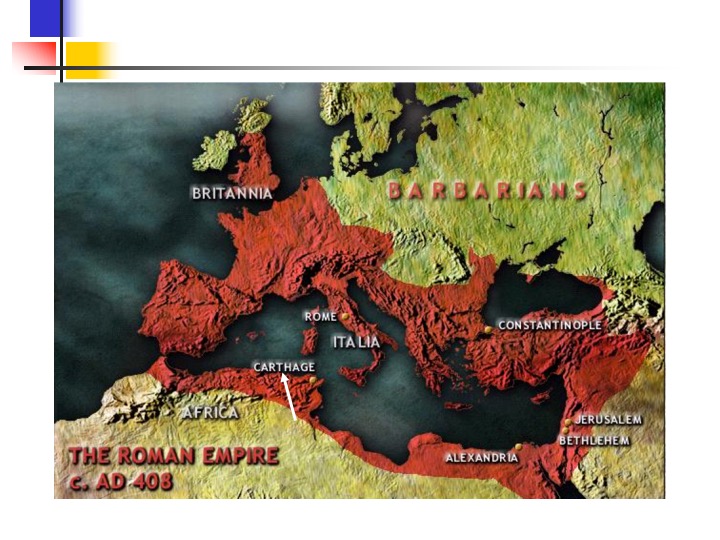 Let’s begin by looking at  a simple map of these times.

The city of Carthage is the dot below the ”E” in Carthage.

And the arrow I have added is pointing approximately to where the small city of Thagaste and the larger port city of Hippo were located.

Some things to note

•For the Western part the center was right in the Mediterranean. Places like London and even Paris were not as Roman as North Africa. Augustine and his neighbors considered themselves Roman - they were educated and spoke Latin.

Despite not being in Rome Augustine had tremendous influence over Christian thinking across the empire because of his rhetorical skills and voluminous writing. 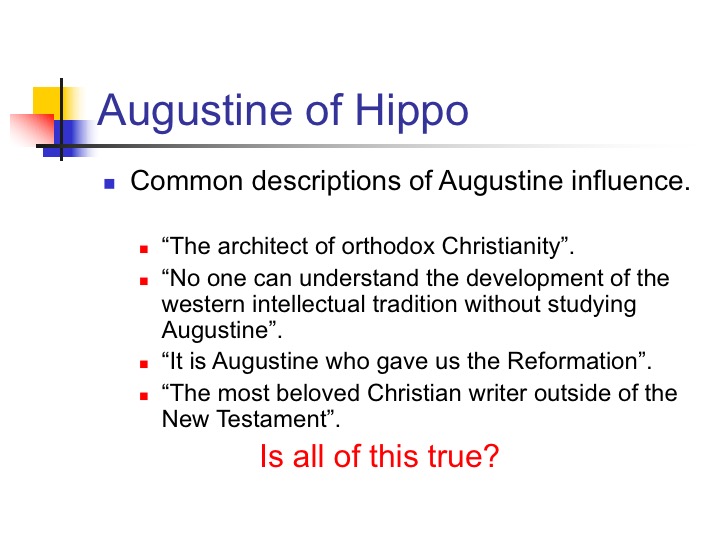 “The architect of orthodox Christianity”.

“No one can understand the development of the western intellectual tradition without studying Augustine”.

“It is Augustine who gave us the Reformation”.

“The most beloved Christian writer outside of the New Testament”.

Is all of this true?

Well, I will let you answer that after we study his work. 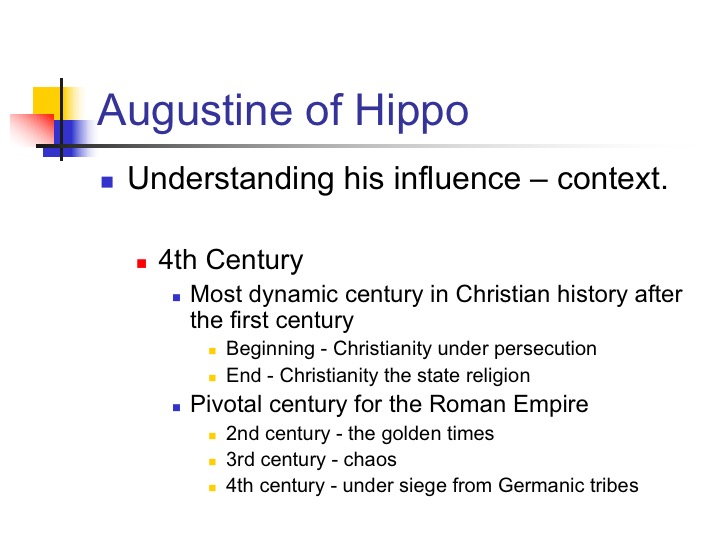 To understand Augustine it is very important we understand the time he grew up in and the status of both Christianity and the Roman Empire.  The 4th century in many ways was the most dynamic century in the history of Christianity other than of course the 1st century.

Most dynamic century in Christian history after the first century

Pivotal century for the Roman Empire 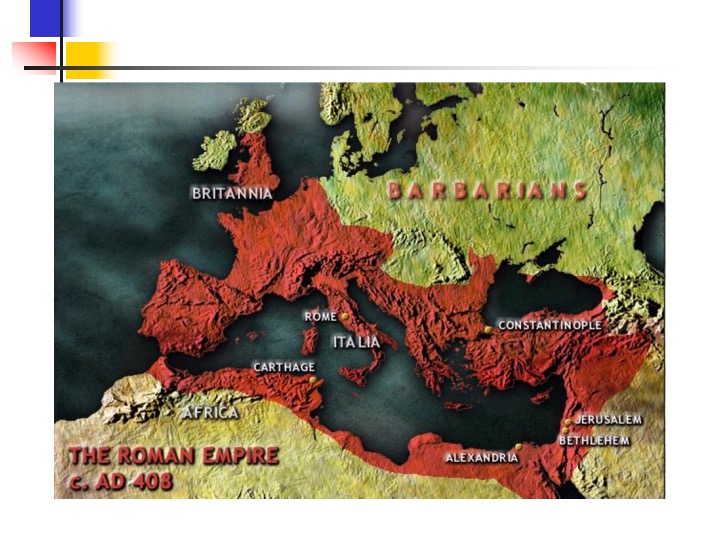 So Let’s Look At This Map Again.

Note that this represents the year 408.

And the red represents the Roman Empire – West and East

And the green the German tribes (Goths, The Visigoths, and the Vandals)

And be aware that Rome fell to German tribes in 410.

According to historians many Romans fled Rome and went to northern Africa for safety.

But also be aware that one of the German tribes, the Vandals drove through France and Spain and entered northern Africa in 429.

They laid siege to the fortified city of Hippo and it eventually fell in the year 430. Augustine died as the city fell.

There was an important and interesting fact associated with the collapse of Hippo. The German general gave his soldiers instructions to not destroy the home and library of Augustine. And I am explaining that because it plays into the next slide. 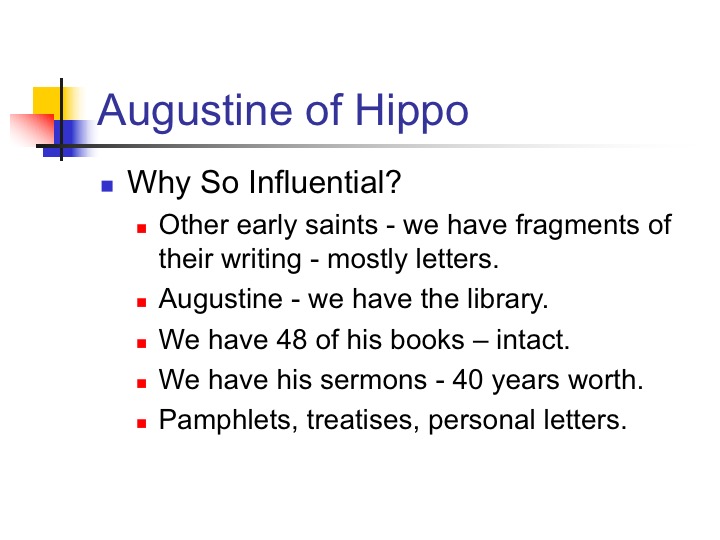 But why has Augustine been so influential down through Christian history. There were many other Christian Saints who were contemporary and who preceded him. Yet he seems to stand out with respect to his influence down through the ages.

Well - there is one possibility that all scholars have recognized. For all of these other saints we have relatively small records of their writing - in fact many of their writings are fragments. But that is very different for Augustine. You remember the German general who ordered his warriors to save the house and library of Augustine when they finally stormed Hippo. Scholars today have that library.

We have at least 50 of his books - intact. We have his Sunday sermons - 40 years worth. We have all of his treatises, pamphlets, and personal letters. 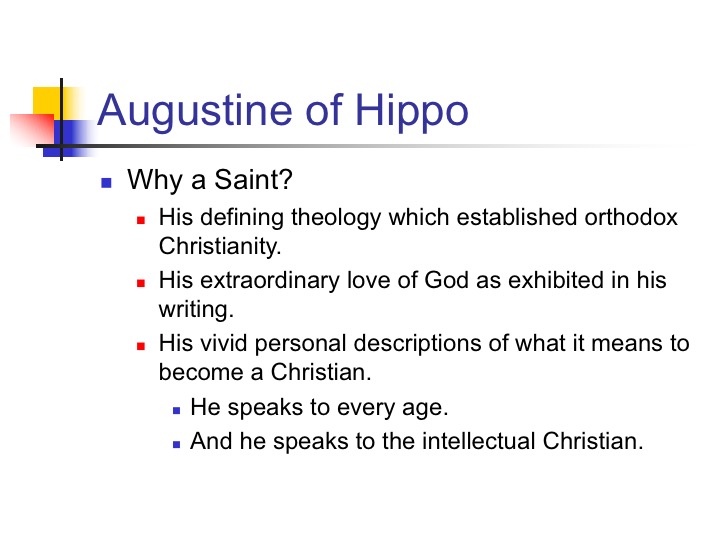 The Catholic church named him a Saint. Some of the principle reasons: 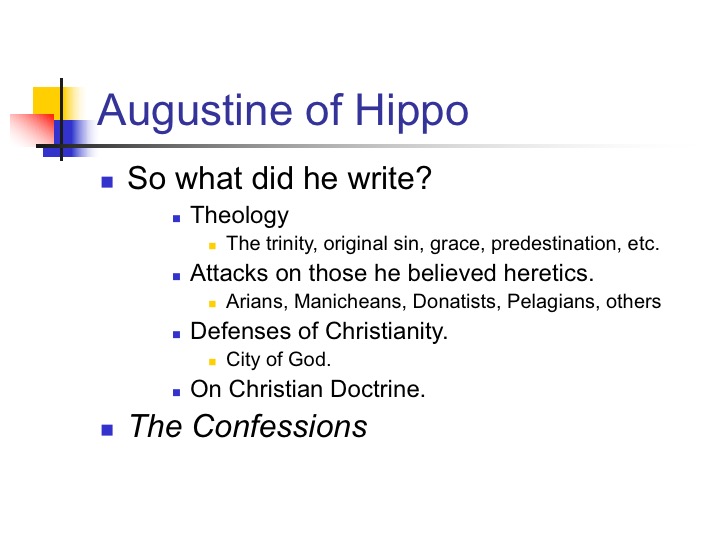 So what did he write? 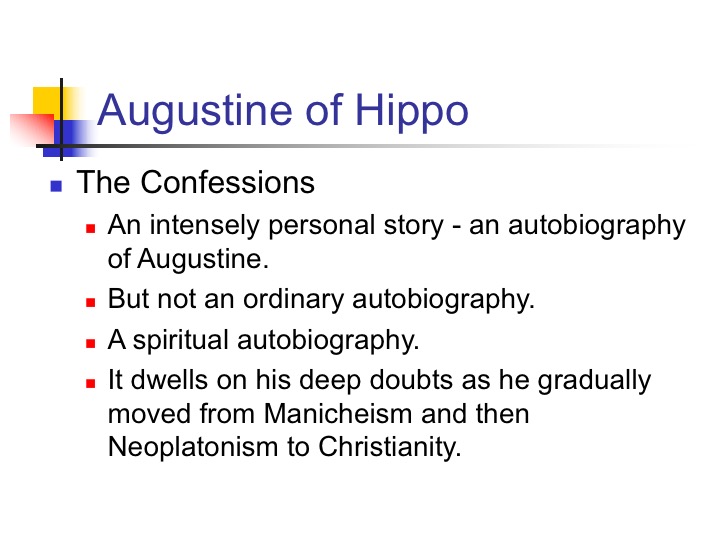 But we are focusing on his Confessions.

It dwells on his deep doubts as he gradually moved from Manichaeism and then Neoplatonism to Christianity. And as he told it he was constantly confessing his sins 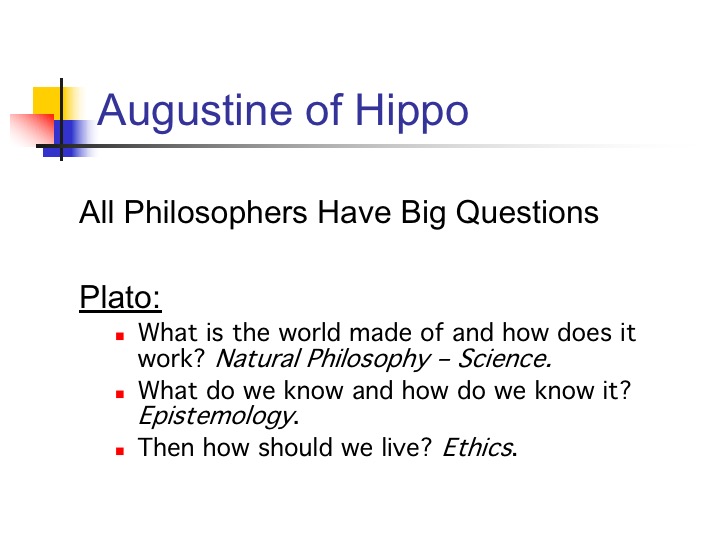 Augustine used the entire book to address some major questions that he wrestled with during his spiritual struggle. Augustine was considered a great philosopher and philosophy has always been about addressing really big questions. For example Plato, who asked 3 big questions that defined major branches of philosophy:

1. What is the world made of and how does it work?  Natural Philosophy - Science 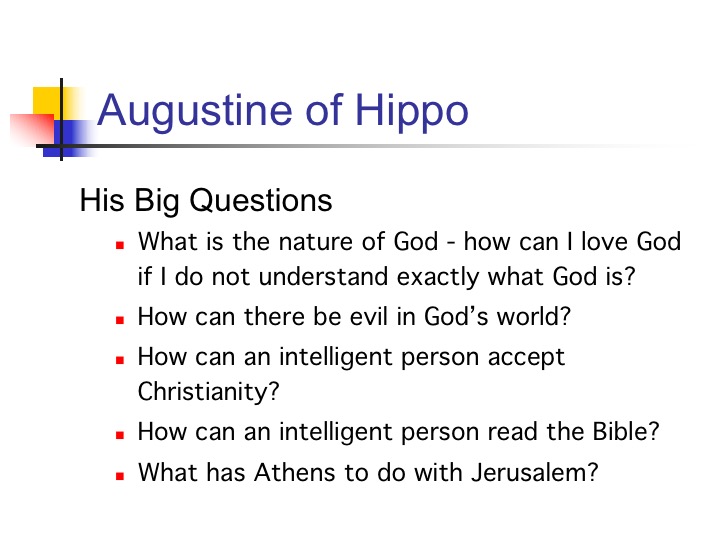 What is the nature of God - how can I love God if I do not understand exactly what God is?

How can there be evil in God’s world?

How can an intelligent person accept Christianity?

How can an intelligent person read the Bible?

What has Athens to do with Jerusalem? 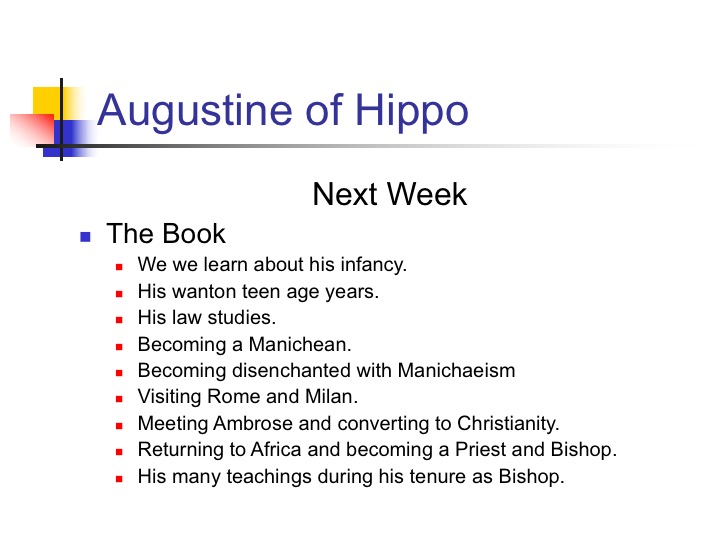