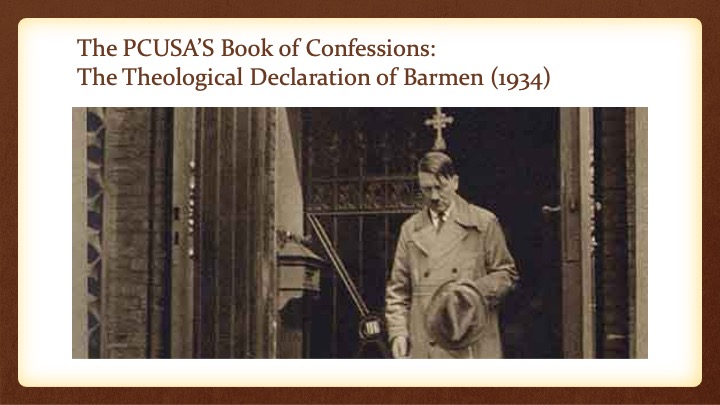 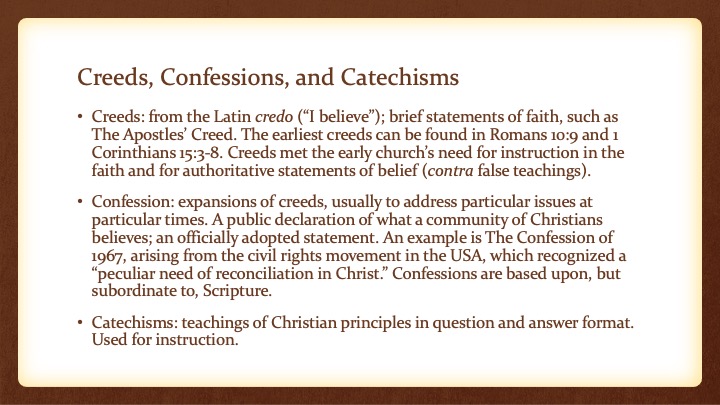 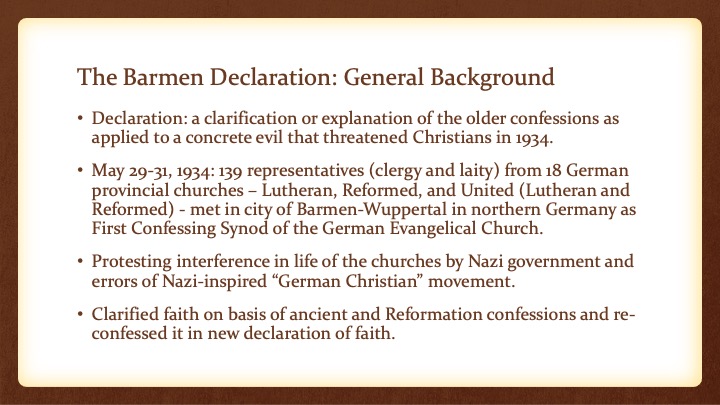 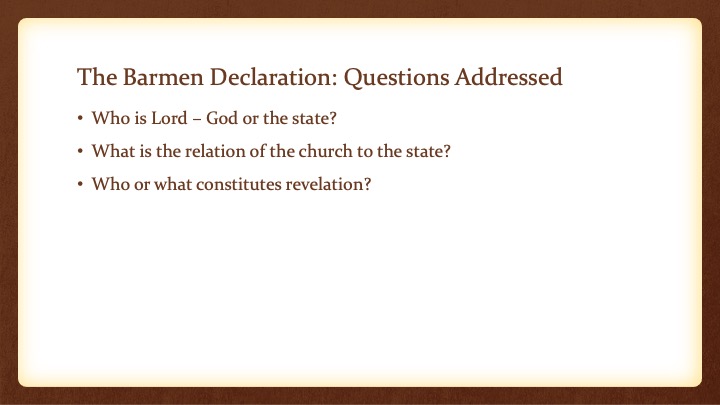 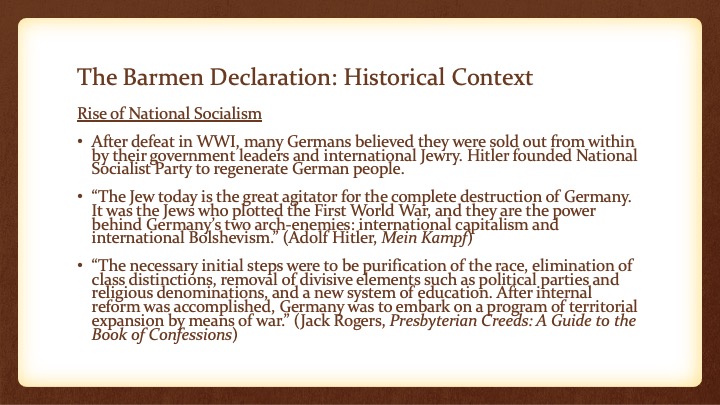 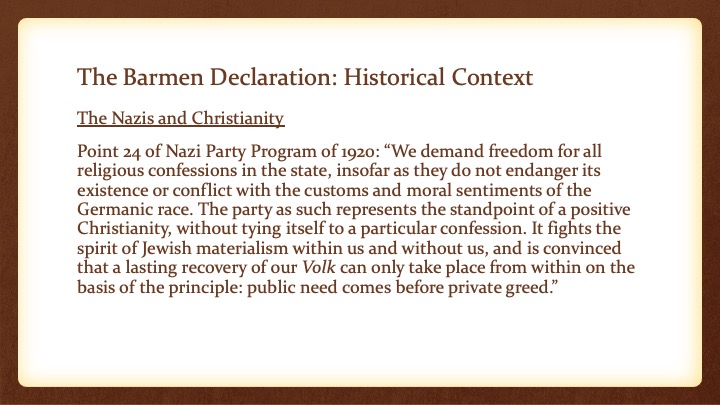 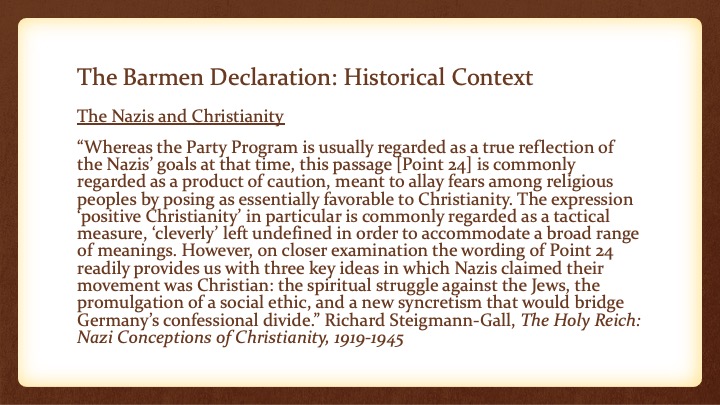 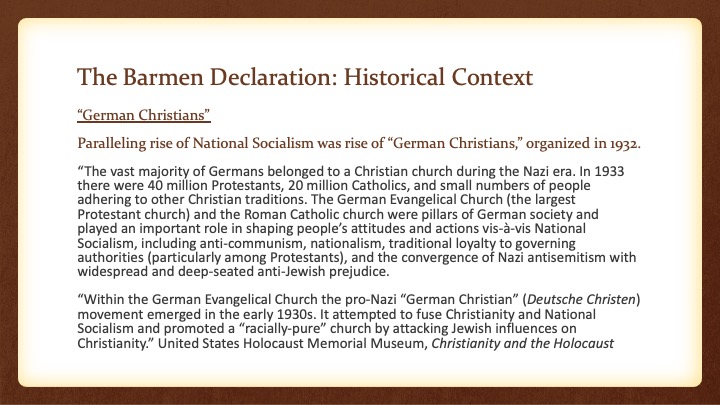 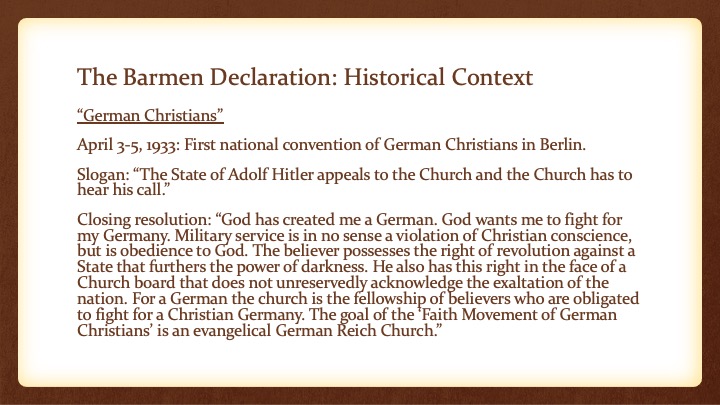 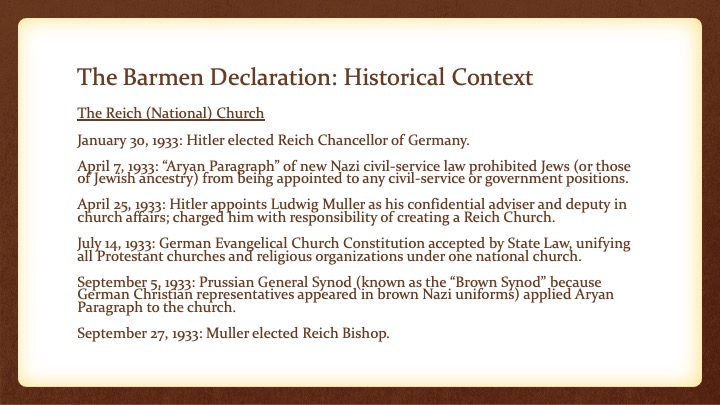 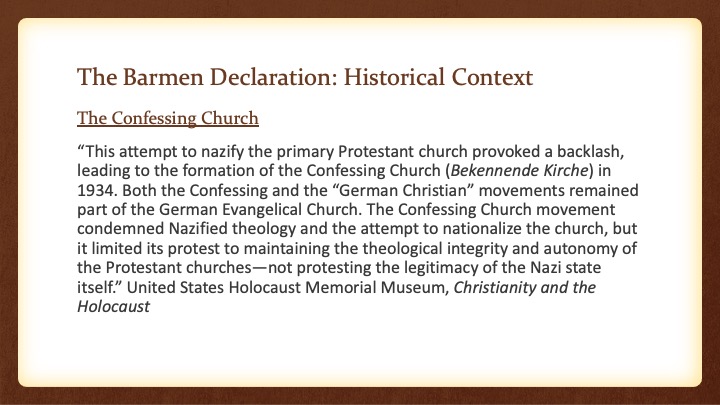 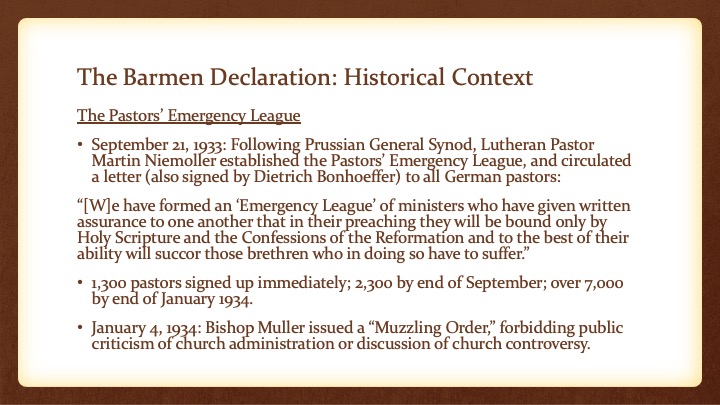 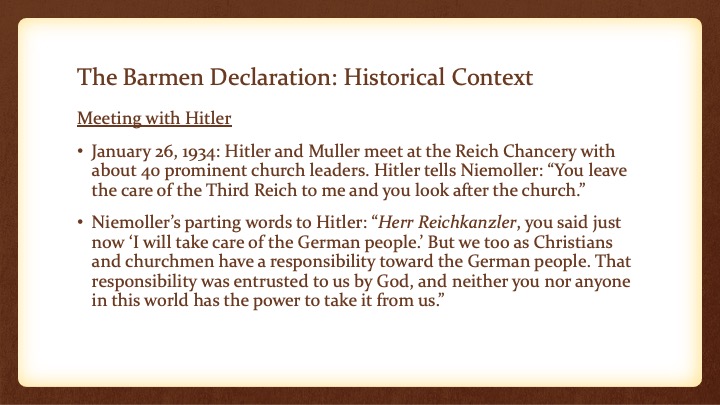 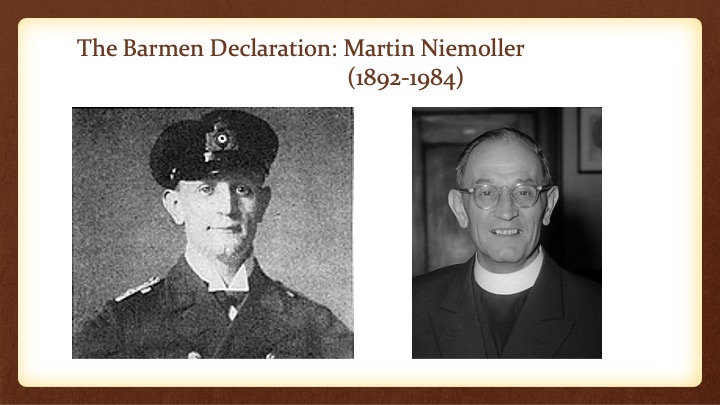 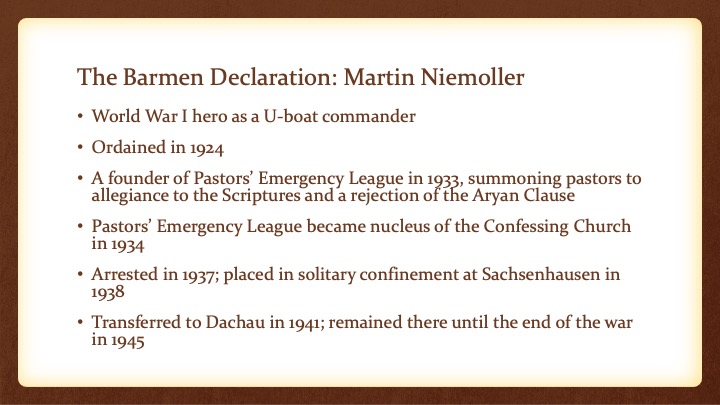 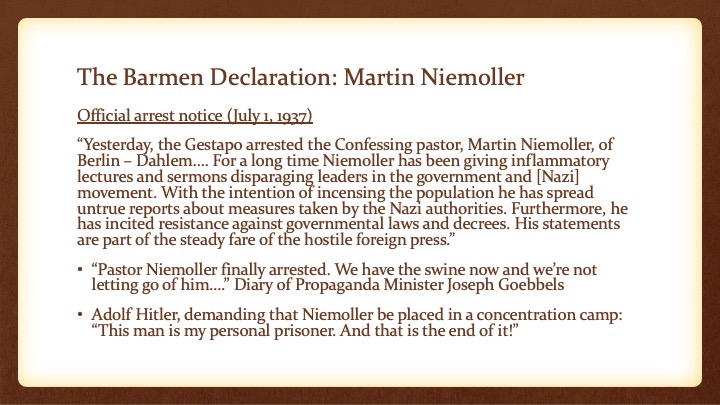 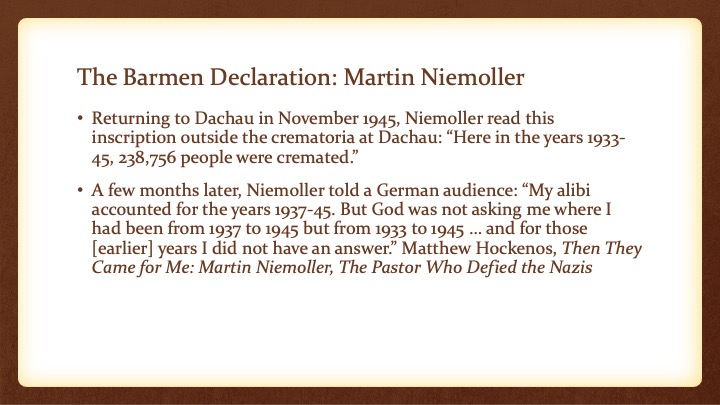 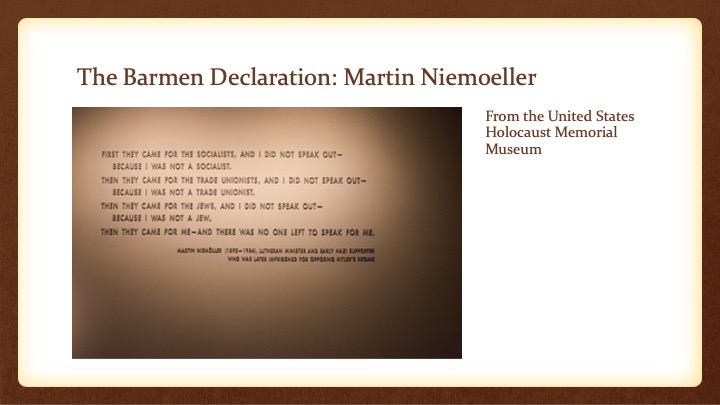 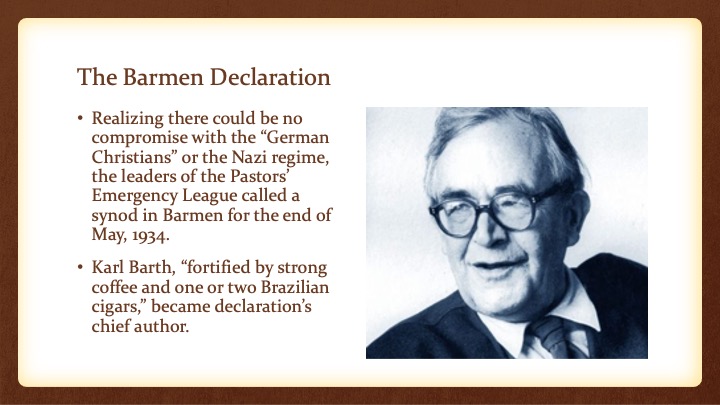 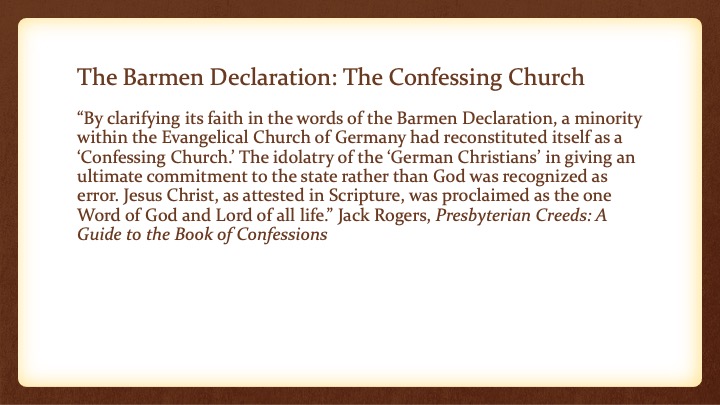 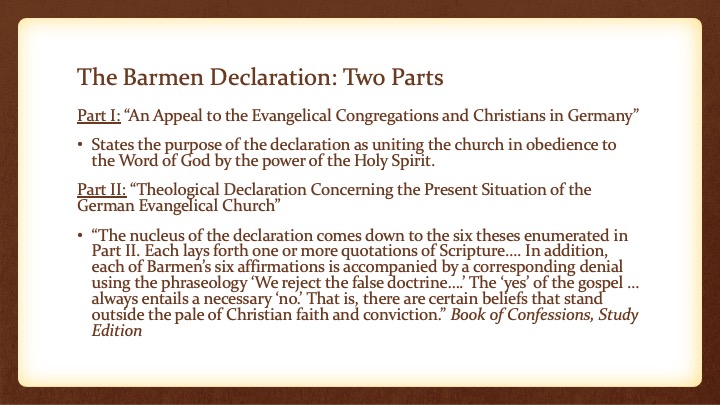 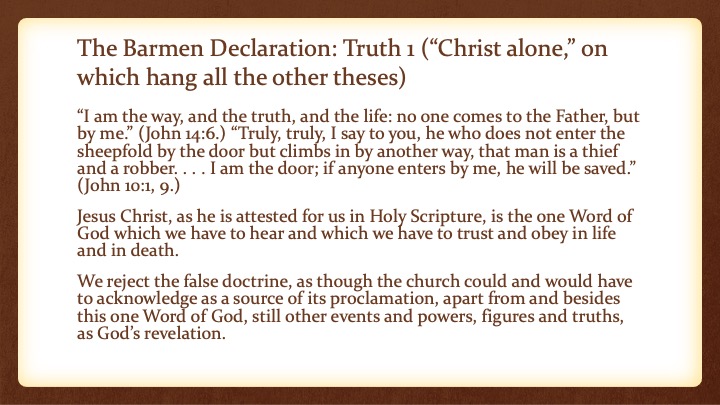 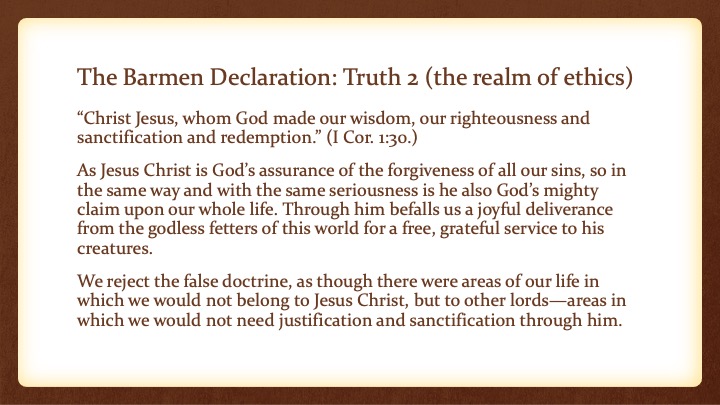 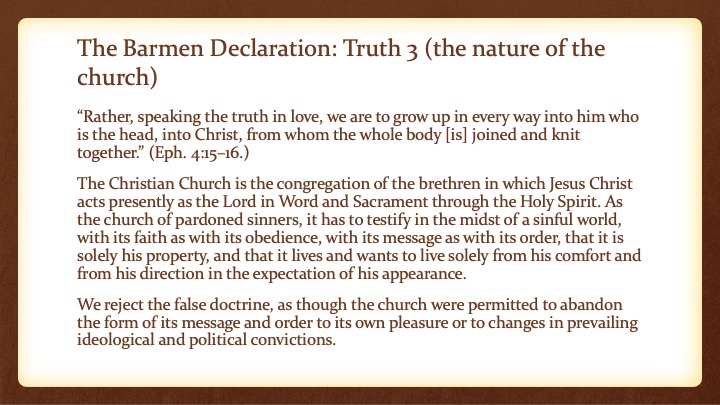 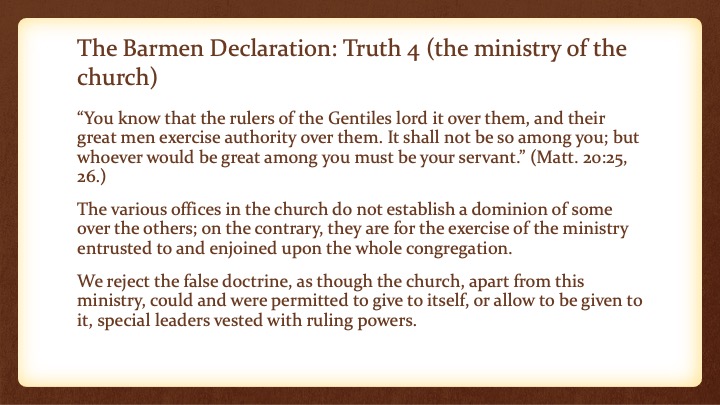 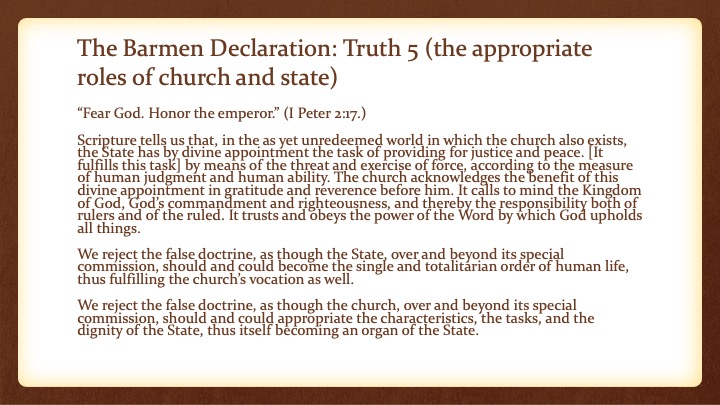 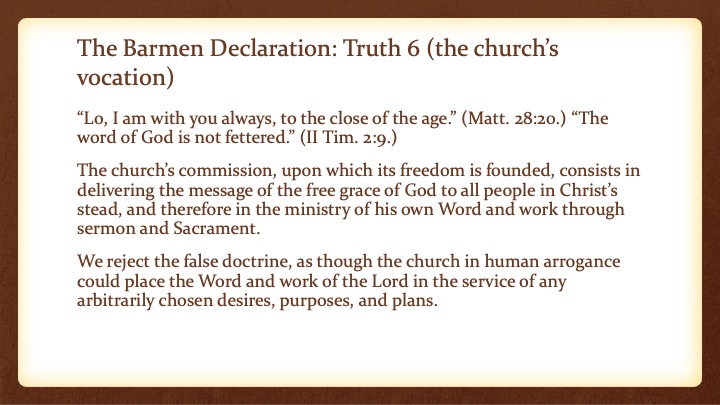 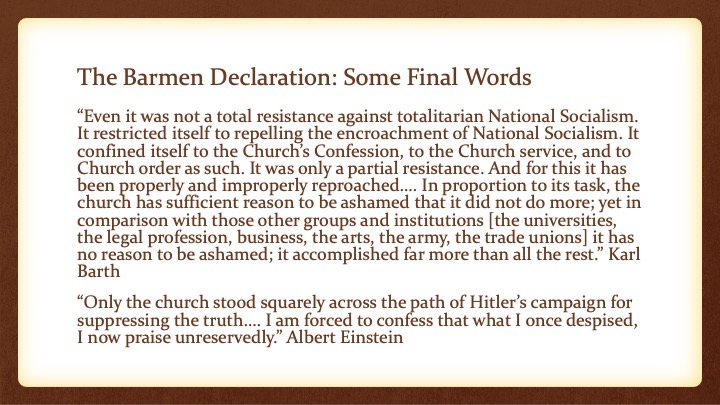 The PCUSA’S Book of Confessions:

The Theological Declaration of Barmen (1934)

Creeds: from the Latin credo (“I believe”); brief statements of faith, such as The Apostles’ Creed. The earliest creeds can be found in Romans 10:9 and 1 Corinthians 15:3-8. Creeds met the early church’s need for instruction in the faith and for authoritative statements of belief (contra false teachings).

Confession: expansions of creeds, usually to address particular issues at  particular times. A public declaration of what a community of Christians believes; an officially adopted statement. An example is The Confession of 1967, arising from the civil rights movement in the USA, which recognized a “peculiar need of reconciliation in Christ.” Confessions are based upon, but subordinate to, Scripture.

Catechisms: teachings of Christian principles in question and answer format. Used for instruction.

Declaration: a clarification or explanation of the older confessions as applied to a concrete evil that threatened Christians in 1934.

May 29-31, 1934: 139 representatives (clergy and laity) from 18 German provincial churches – Lutheran, Reformed, and United (Lutheran and Reformed) - met in city of Barmen-Wuppertal in northern Germany as First Confessing Synod of the German Evangelical Church.

Protesting interference in life of the churches by Nazi government and errors of Nazi-inspired “German Christian” movement.

Clarified faith on basis of ancient and Reformation confessions and re-confessed it in new declaration of faith.

Who is Lord – God or the state?

What is the relation of the church to the state?

Who or what constitutes revelation?

After defeat in WWI, many Germans believed they were sold out from within by their government leaders and international Jewry. Hitler founded National Socialist Party to regenerate German people.

“The Jew today is the great agitator for the complete destruction of Germany. It was the Jews who plotted the First World War, and they are the power behind Germany’s two arch-enemies: international capitalism and international Bolshevism.” (Adolf Hitler, Mein Kampf)

“The necessary initial steps were to be purification of the race, elimination of class distinctions, removal of divisive elements such as political parties and religious denominations, and a new system of education. After internal reform was accomplished, Germany was to embark on a program of territorial expansion by means of war.” (Jack Rogers, Presbyterian Creeds: A Guide to the Book of Confessions)

The Nazis and Christianity

Point 24 of Nazi Party Program of 1920: “We demand freedom for all religious confessions in the state, insofar as they do not endanger its existence or conflict with the customs and moral sentiments of the Germanic race. The party as such represents the standpoint of a positive Christianity, without tying itself to a particular confession. It fights the spirit of Jewish materialism within us and without us, and is convinced that a lasting recovery of our Volk can only take place from within on the basis of the principle: public need comes before private greed.”

The Nazis and Christianity

“Whereas the Party Program is usually regarded as a true reflection of the Nazis’ goals at that time, this passage [Point 24] is commonly regarded as a product of caution, meant to allay fears among religious peoples by posing as essentially favorable to Christianity. The expression ‘positive Christianity’ in particular is commonly regarded as a tactical measure, ‘cleverly’ left undefined in order to accommodate a broad range of meanings. However, on closer examination the wording of Point 24 readily provides us with three key ideas in which Nazis claimed their movement was Christian: the spiritual struggle against the Jews, the promulgation of a social ethic, and a new syncretism that would bridge Germany’s confessional divide.” Richard Steigmann-Gall, The Holy Reich: Nazi Conceptions of Christianity, 1919-1945

Paralleling rise of National Socialism was rise of “German Christians,” organized in 1932.

“The vast majority of Germans belonged to a Christian church during the Nazi era. In 1933 there were 40 million Protestants, 20 million Catholics, and small numbers of people adhering to other Christian traditions. The German Evangelical Church (the largest Protestant church) and the Roman Catholic church were pillars of German society and played an important role in shaping people’s attitudes and actions vis-à-vis National Socialism, including anti-communism, nationalism, traditional loyalty to governing authorities (particularly among Protestants), and the convergence of Nazi antisemitism with widespread and deep-seated anti-Jewish prejudice.

“Within the German Evangelical Church the pro-Nazi “German Christian” (Deutsche Christen) movement emerged in the early 1930s. It attempted to fuse Christianity and National Socialism and promoted a “racially-pure” church by attacking Jewish influences on Christianity.” United States Holocaust Memorial Museum, Christianity and the Holocaust

Slogan: “The State of Adolf Hitler appeals to the Church and the Church has to hear his call.”

Closing resolution: “God has created me a German. God wants me to fight for my Germany. Military service is in no sense a violation of Christian conscience, but is obedience to God. The believer possesses the right of revolution against a State that furthers the power of darkness. He also has this right in the face of a Church board that does not unreservedly acknowledge the exaltation of the nation. For a German the church is the fellowship of believers who are obligated to fight for a Christian Germany. The goal of the ‘Faith Movement of German Christians’ is an evangelical German Reich Church.”

April 7, 1933: “Aryan Paragraph” of new Nazi civil-service law prohibited Jews (or those of Jewish ancestry) from being appointed to any civil-service or government positions.

April 25, 1933: Hitler appoints Ludwig Muller as his confidential adviser and deputy in church affairs; charged him with responsibility of creating a Reich Church.

The Theological Declaration of Barmen