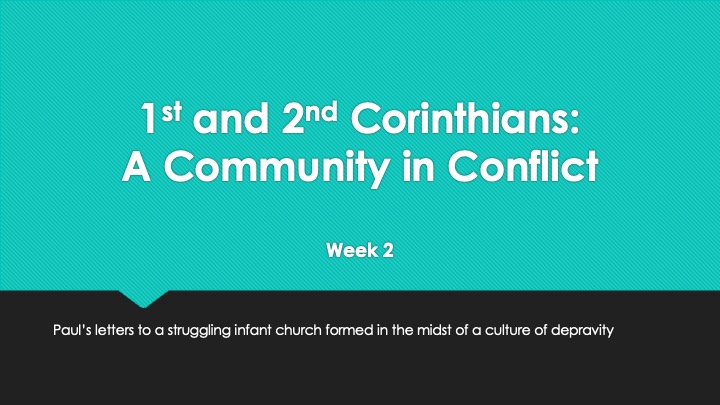 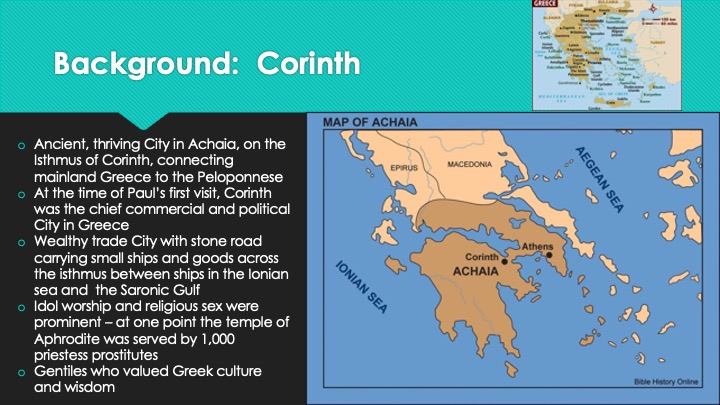 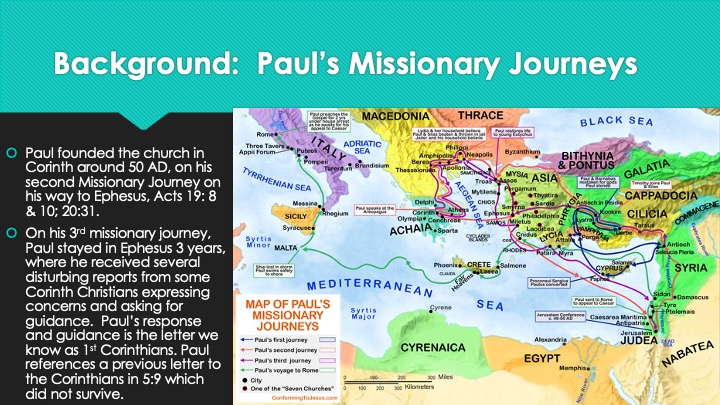 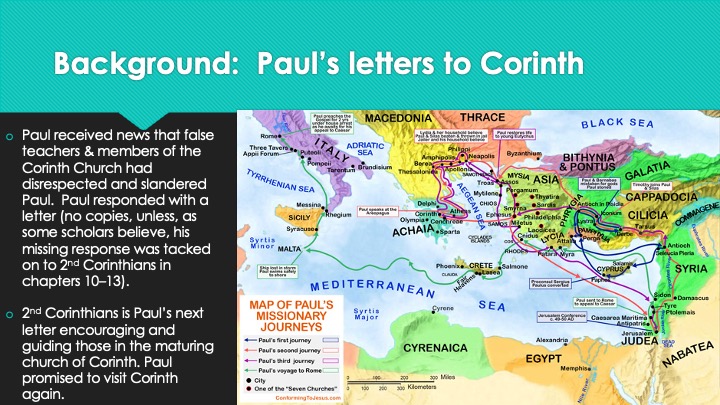 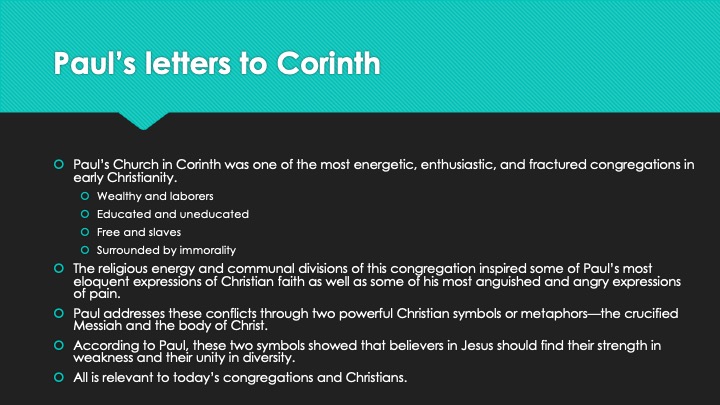 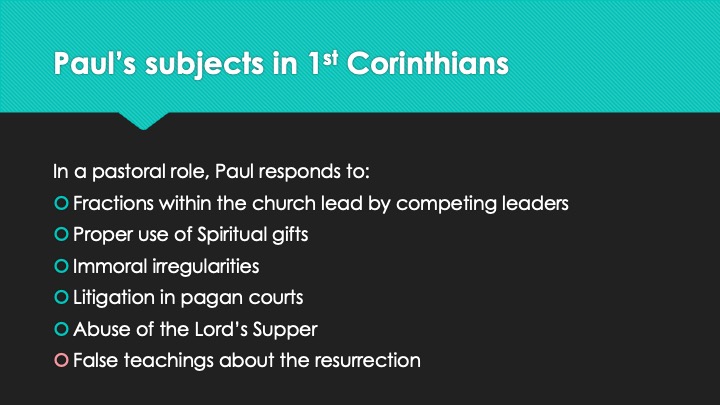 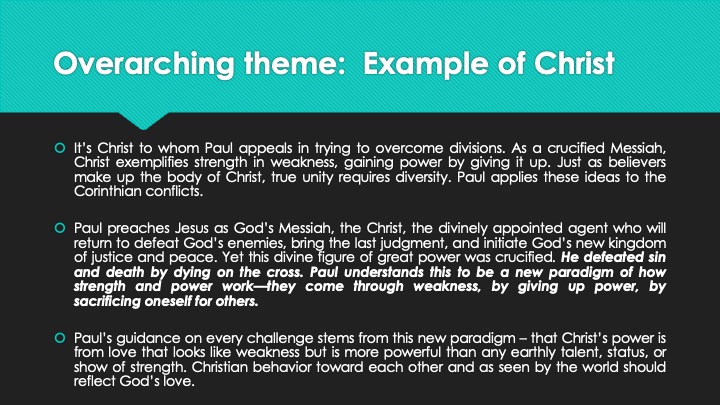 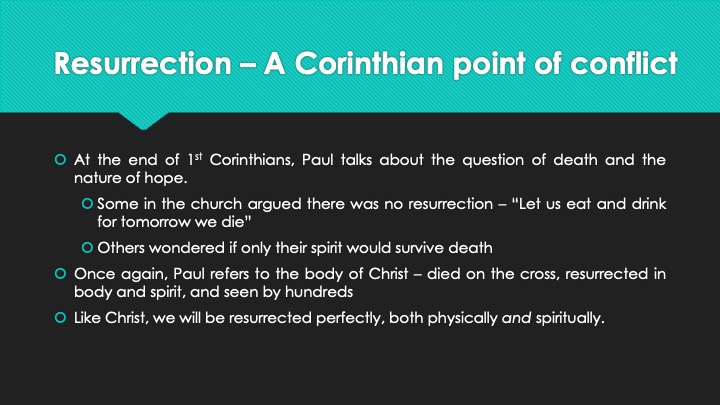 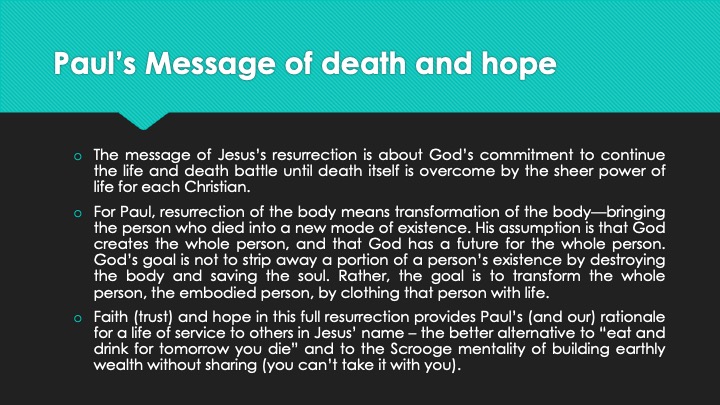 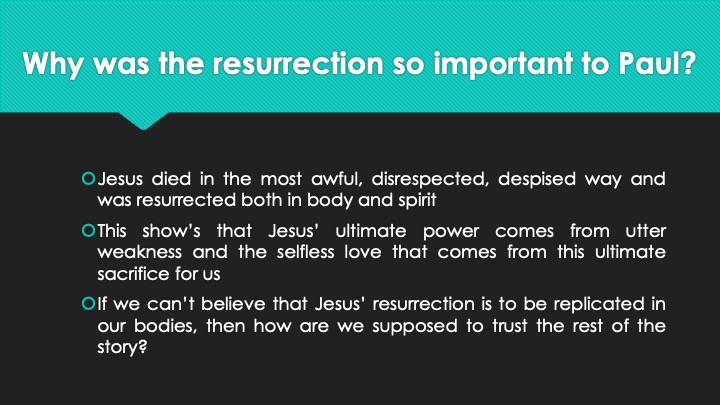 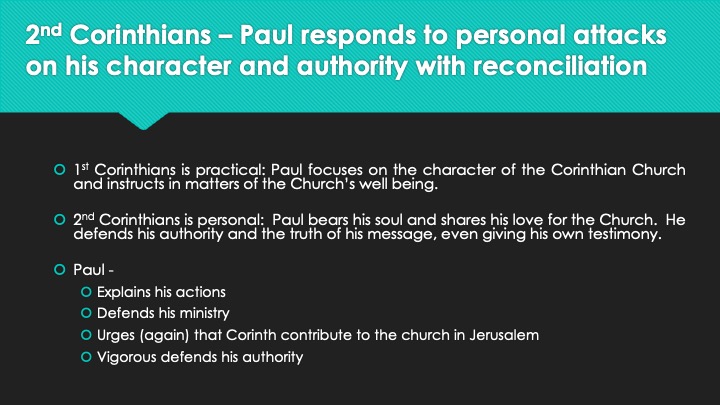 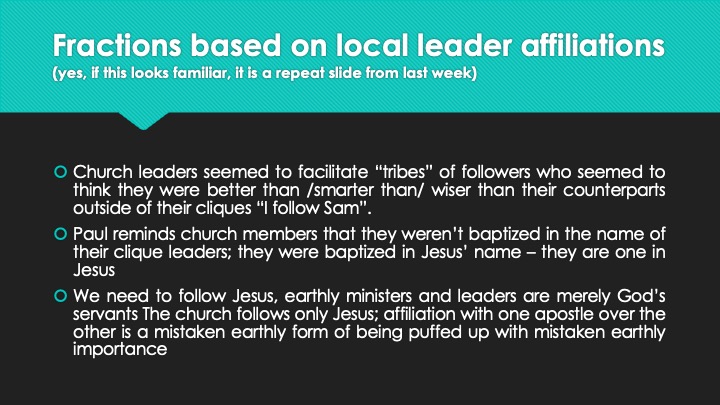 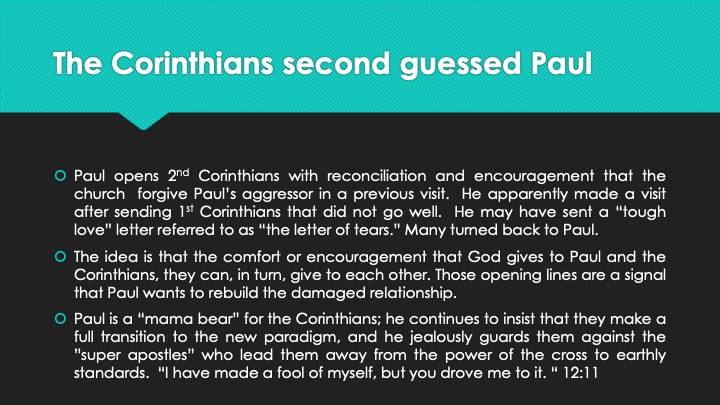 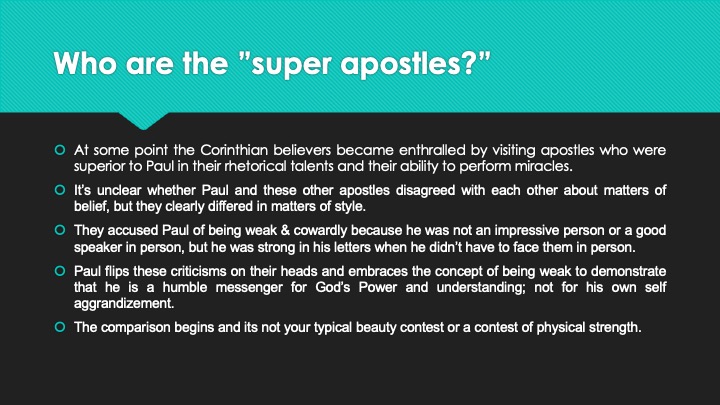 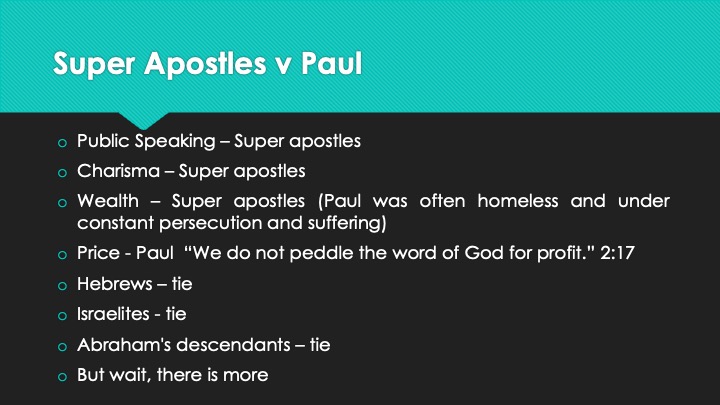 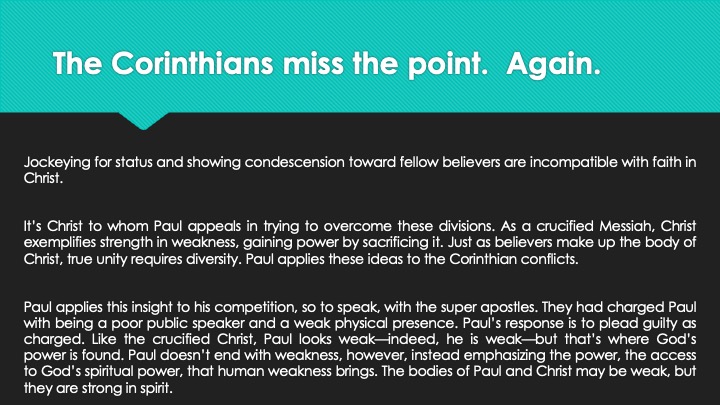 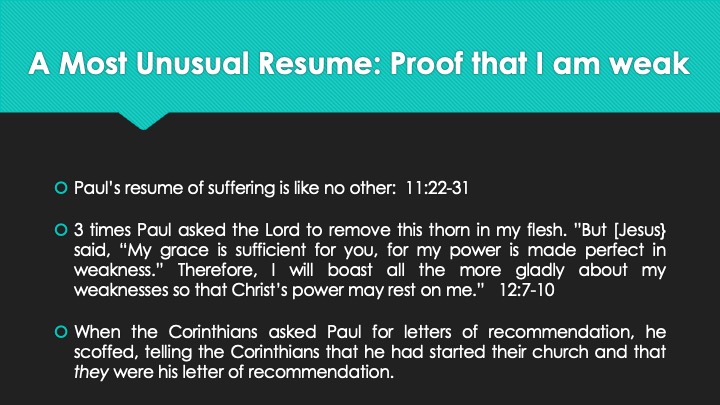 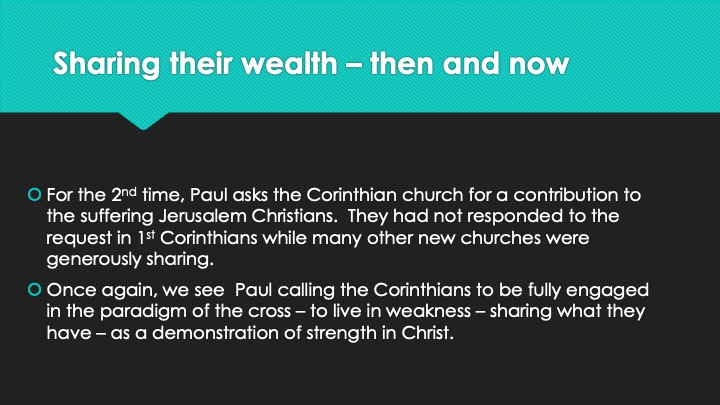 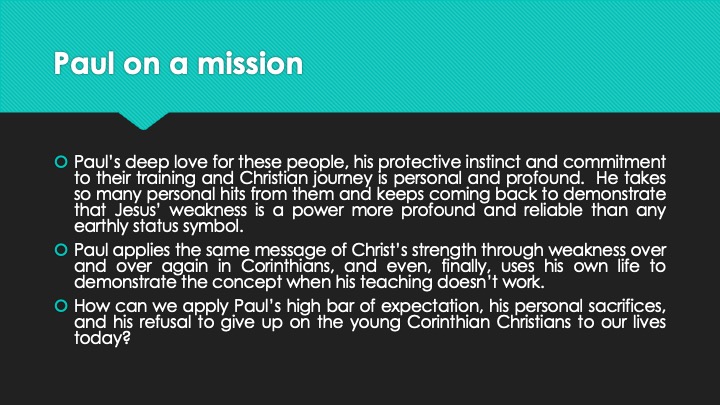 Corinthians A Community in Conflict 2  - The Text

1st and 2nd Corinthians:  A Community in Conflict
Week 2

Ancient, thriving City in Achaia, on the Isthmus of Corinth, connecting mainland Greece to the Peloponnese

At the time of Paul’s first visit, Corinth was the chief commercial and political City in Greece

Idol worship and religious sex were prominent – at one point the temple of Aphrodite was served by 1,000 priestess prostitutes

On his 3rd missionary journey, Paul stayed in Ephesus 3 years, where he received several disturbing reports from some Corinth Christians expressing concerns and asking for guidance.  Paul’s response and guidance is the letter we know as 1st Corinthians. Paul references a previous letter to the Corinthians in 5:9 which did not survive.

Paul received news that false teachers & members of the Corinth Church had disrespected and slandered Paul.  Paul responded with a letter (no copies, unless, as some scholars believe, his missing response was tacked on to 2nd Corinthians in chapters 10–13).

2nd Corinthians is Paul’s next letter encouraging and guiding those in the maturing church of Corinth. Paul promised to visit Corinth again.

Paul’s Church in Corinth was one of the most energetic, enthusiastic, and fractured congregations in early Christianity.

The religious energy and communal divisions of this congregation inspired some of Paul’s most eloquent expressions of Christian faith as well as some of his most anguished and angry expressions of pain.

Paul addresses these conflicts through two powerful Christian symbols or metaphors - the crucified Messiah and the body of Christ.

According to Paul, these two symbols showed that believers in Jesus should find their strength in weakness and their unity in diversity.

All is relevant to today’s congregations and Christians.

In a pastoral role, Paul responds to:

Fractions within the church lead by competing leaders

Proper use of Spiritual gifts

Abuse of the Lord’s Supper

False teachings about the resurrection

It’s Christ to whom Paul appeals in trying to overcome divisions. As a crucified Messiah, Christ exemplifies strength in weakness, gaining power by giving it up. Just as believers make up the body of Christ, true unity requires diversity. Paul applies these ideas to the Corinthian conflicts.

Paul preaches Jesus as God’s Messiah, the Christ, the divinely appointed agent who will return to defeat God’s enemies, bring the last judgment, and initiate God’s new kingdom of justice and peace. Yet this divine figure of great power was crucified. He defeated sin and death by dying on the cross. Paul understands this to be a new paradigm of how strength and power work—they come through weakness, by giving up power, by sacrificing oneself for others.

Paul’s guidance on every challenge stems from this new paradigm – that Christ’s power is from love that looks like weakness but is more powerful than any earthly talent, status, or show of strength. Christian behavior toward each other and as seen by the world should reflect God’s love.

Resurrection – A Corinthian point of conflict

At the end of 1st Corinthians, Paul talks about the question of death and the nature of hope.

Others wondered if only their spirit would survive death

Once again, Paul refers to the body of Christ – died on the cross, resurrected in body and spirit, and seen by hundreds

Like Christ, we will be resurrected perfectly, both physically and spiritually.

Paul’s Message of Death and Hope

The message of Jesus’s resurrection is about God’s commitment to continue the life and death battle until death itself is overcome by the sheer power of life for each Christian.

Faith (trust) and hope in this full resurrection provides Paul’s (and our) rationale for a life of service to others in Jesus’ name – the better alternative to “eat and drink for tomorrow you die” and to the Scrooge mentality of building earthly wealth without sharing (you can’t take it with you).

Why was the resurrection so important to Paul?

Jesus died in the most awful, disrespected, despised way and was resurrected both in body and spirit

If we can’t believe that Jesus’ resurrection is to be replicated in our bodies, then how are we supposed to trust the rest of the story?

1st Corinthians is practical: Paul focuses on the character of the Corinthian Church and instructs in matters of the Church’s well being.

2nd Corinthians is personal:  Paul bears his soul and shares his love for the Church.  He defends his authority and the truth of his message, even giving his own testimony.

Urges (again) that Corinth contribute to the church in Jerusalem

Fractions based on local leader affiliations

Church leaders seemed to facilitate “tribes” of followers who seemed to think they were better than /smarter than/ wiser than their counterparts outside of their cliques “I follow Sam”.

Paul reminds church members that they weren’t baptized in the name of their clique leaders; they were baptized in Jesus’ name – they are one in Jesus

We need to follow Jesus, earthly ministers and leaders are merely God’s servants The church follows only Jesus; affiliation with one apostle over the other is a mistaken earthly form of being puffed up with mistaken earthly importance

Paul opens 2nd Corinthians with reconciliation and encouragement that the church  forgive Paul’s aggressor in a previous visit.  He apparently made a visit after sending 1st Corinthians that did not go well.  He may have sent a “tough love” letter referred to as “the letter of tears.” Many turned back to Paul.

The idea is that the comfort or encouragement that God gives to Paul and the Corinthians, they can, in turn, give to each other. Those opening lines are a signal that Paul wants to rebuild the damaged relationship.

Paul is a “mama bear” for the Corinthians; he continues to insist that they make a full transition to the new paradigm, and he jealously guards them against the ”super apostles” who lead them away from the power of the cross to earthly standards.  “I have made a fool of myself, but you drove me to it. “ 12:11

Who are the ”super apostles?”

At some point the Corinthian believers became enthralled by visiting apostles who were superior to Paul in their rhetorical talents and their ability to perform miracles.

It’s unclear whether Paul and these other apostles disagreed with each other about matters of belief, but they clearly differed in matters of style.

They accused Paul of being weak & cowardly because he was not an impressive person or a good speaker in person, but he was strong in his letters when he didn’t have to face them in person.

Paul flips these criticisms on their heads and embraces the concept of being weak to demonstrate that he is a humble messenger for God’s Power and understanding; not for his own self aggrandizement.

The comparison begins and its not your typical beauty contest or a contest of physical strength.

o But wait, there is more

The Corinthians miss the point.  Again.

Jockeying for status and showing condescension toward fellow believers are incompatible with faith in Christ.

It’s Christ to whom Paul appeals in trying to overcome these divisions. As a crucified Messiah, Christ exemplifies strength in weakness, gaining power by sacrificing it. Just as believers make up the body of Christ, true unity requires diversity. Paul applies these ideas to the Corinthian conflicts.

Paul applies this insight to his competition, so to speak, with the super apostles. They had charged Paul with being a poor public speaker and a weak physical presence. Paul’s response is to plead guilty as charged. Like the crucified Christ, Paul looks weak—indeed, he is weak—but that’s where God’s power is found. Paul doesn’t end with weakness, however, instead emphasizing the power, the access to God’s spiritual power, that human weakness brings. The bodies of Paul and Christ may be weak, but they are strong in spirit.

A Most Unusual Resume: Proof that I am weak

3 times Paul asked the Lord to remove this thorn in my flesh. ”But [Jesus} said, “My grace is sufficient for you, for my power is made perfect in weakness.” Therefore, I will boast all the more gladly about my weaknesses so that Christ’s power may rest on me.”   12:7-10

Sharing their wealth – then and now

For the 2nd time, Paul asks the Corinthian church for a contribution to the suffering Jerusalem Christians.  They had not responded to the request in 1st Corinthians while many other new churches were generously sharing.

Once again, we see  Paul calling the Corinthians to be fully engaged in the paradigm of the cross – to live in weakness – sharing what they have – as a demonstration of strength in Christ.

Paul on a mission

Paul’s deep love for these people, his protective instinct and commitment to their training and Christian journey is personal and profound.  He takes so many personal hits from them and keeps coming back to demonstrate that Jesus’ weakness is a power more profound and reliable than any earthly status symbol.

Paul applies the same message of Christ’s strength through weakness over and over again in Corinthians, and even, finally, uses his own life to demonstrate the concept when his teaching doesn’t work.

How can we apply Paul’s high bar of expectation, his personal sacrifices, and his refusal to give up on the young Corinthian Christians to our lives today?

Corinthians A Community in Conflict