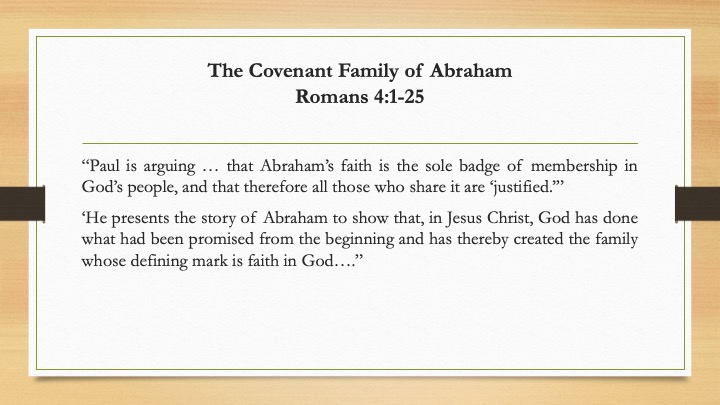 The Covenant Family of Abraham
Romans 4:1-25

“Paul is arguing … that Abraham’s faith is the sole badge of membership in God’s people, and that therefore all those who share it are ‘justified.’”

‘He presents the story of Abraham to show that, in Jesus Christ, God has done what had been promised from the beginning and has thereby created the family whose defining mark is faith in God….” 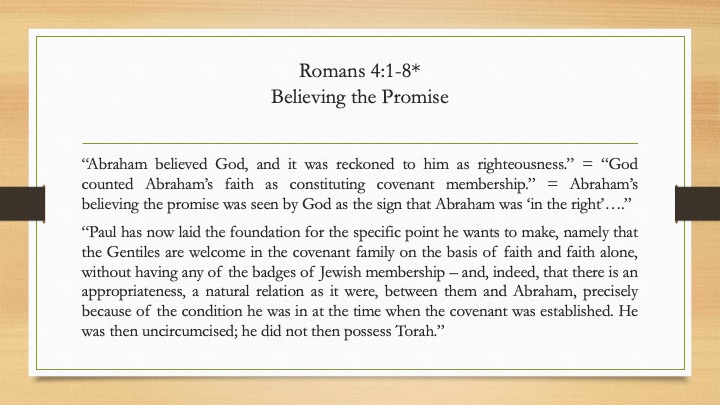 “Abraham believed God, and it was reckoned to him as righteousness.” = “God counted Abraham’s faith as constituting covenant membership.” = Abraham’s believing the promise was seen by God as the sign that Abraham was ‘in the right’….”

“Paul has now laid the foundation for the specific point he wants to make, namely that the Gentiles are welcome in the covenant family on the basis of faith and faith alone, without having any of the badges of Jewish membership – and, indeed, that there is an appropriateness, a natural relation as it were, between them and Abraham, precisely because of the condition he was in at the time when the covenant was established. He was then uncircumcised; he did not then possess Torah.” 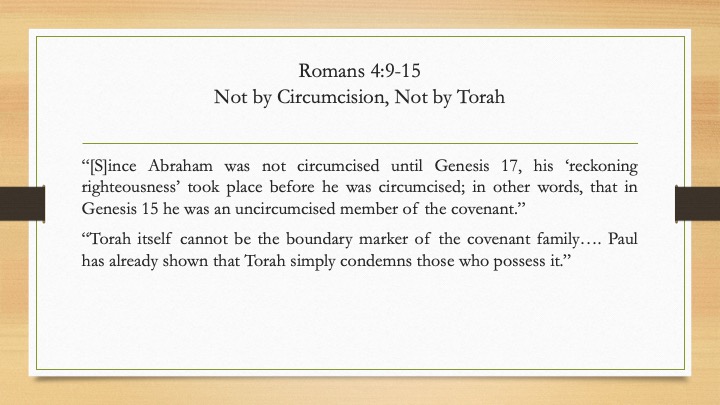 Romans 4:9-15
Not by Circumcision, Not by Torah

“Since Abraham was not circumcised until Genesis 17, his ‘reckoning righteousness’ took place before he was circumcised; in other words, that in Genesis 15 he was an uncircumcised member of the covenant.”

“Torah itself cannot be the boundary marker of the covenant family…. Paul has already shown that Torah simply condemns those who possess it.” 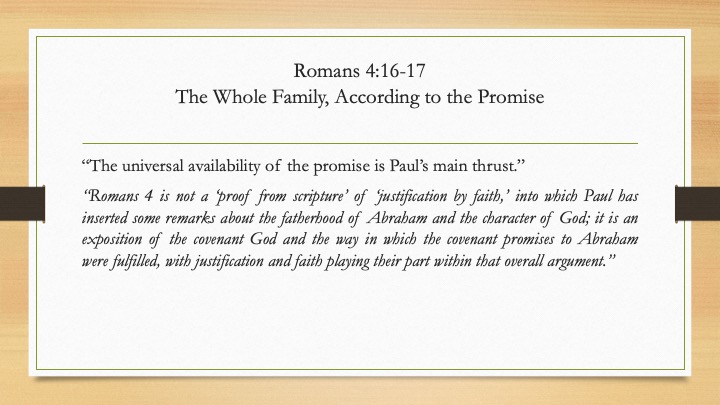 Romans 4:16-17
The Whole Family, According to the Promise

“The universal availability of the promise is Paul’s main thrust.”

“Romans 4 is not a ‘proof from scripture’ of ‘justification by faith,’ into which Paul has inserted some remarks about the fatherhood of Abraham and the character of God; it is an exposition of the covenant God and the way in which the covenant promises to Abraham were fulfilled, with justification and faith playing their part within that overall argument.” 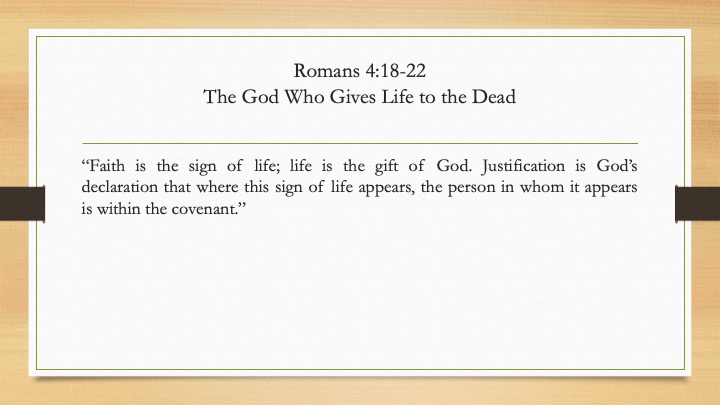 “Faith is the sign of life; life is the gift of God. Justification is God’s declaration that where this sign of life appears, the person in whom it appears is within the covenant.” 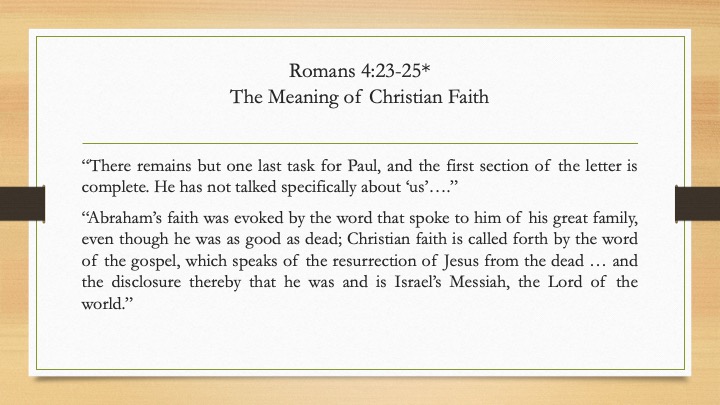 “There remains but one last task for Paul, and the first section of the letter is complete. He has not talked specifically about ‘us’….”

“Abraham’s faith was evoked by the word that spoke to him of his great family, even though he was as good as dead; Christian faith is called forth by the word of the gospel, which speaks of the resurrection of Jesus from the dead … and the disclosure thereby that he was and is Israel’s Messiah, the Lord of the world.” 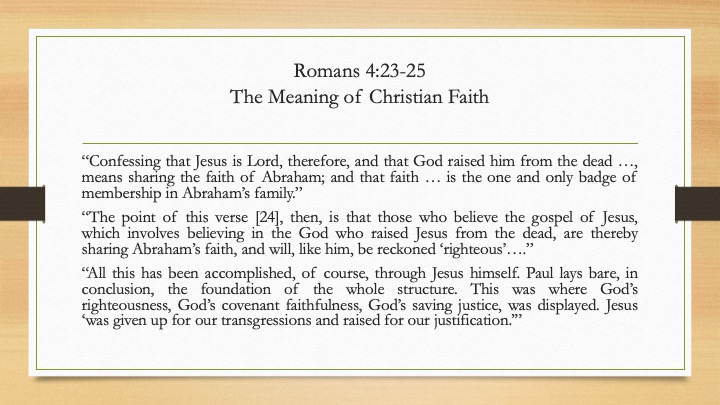 Romans 4:23-25
The Meaning of Christian Faith

“Confessing that Jesus is Lord, therefore, and that God raised him from the dead …, means sharing the faith of Abraham; and that faith … is the one and only badge of membership in Abraham’s family.”

“The point of this verse [24], then, is that those who believe the gospel of Jesus, which involves believing in the God who raised Jesus from the dead, are thereby sharing Abraham’s faith, and will, like him, be reckoned ‘righteous’….”

“All this has been accomplished, of course, through Jesus himself. Paul lays bare, in conclusion, the foundation of the whole structure. This was where God’s righteousness, God’s covenant faithfulness, God’s saving justice, was displayed. Jesus ‘was given up for our transgressions and raised for our justification.’” 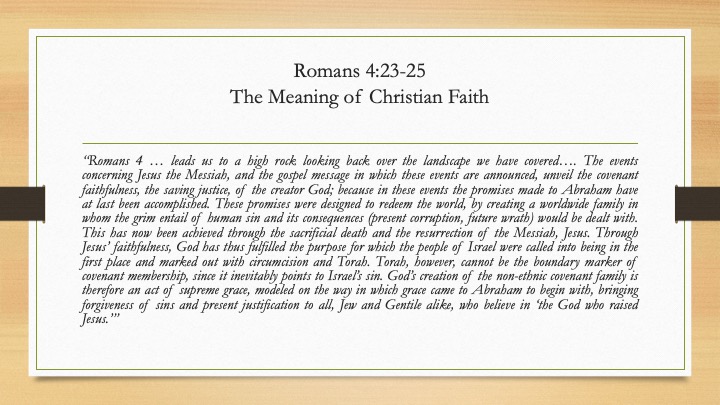 Romans 4:23-25
The Meaning of Christian Faith

“Romans 4 … leads us to a high rock looking back over the landscape we have covered…. The events concerning Jesus the Messiah, and the gospel message in which these events are announced, unveil the covenant faithfulness, the saving justice, of the creator God; because in these events the promises made to Abraham have at last been accomplished. These promises were designed to redeem the world, by creating a worldwide family in whom the grim entail of human sin and its consequences (present corruption, future wrath) would be dealt with. This has now been achieved through the sacrificial death and the resurrection of the Messiah, Jesus. Through Jesus’ faithfulness, God has thus fulfilled the purpose for which the people of Israel were called into being in the first place and marked out with circumcision and Torah. Torah, however, cannot be the boundary marker of covenant membership, since it inevitably points to Israel’s sin. God’s creation of the non-ethnic covenant family is therefore an act of supreme grace, modeled on the way in which grace came to Abraham to begin with, bringing forgiveness of sins and present justification to all, Jew and Gentile alike, who believe in ‘the God who raised Jesus.’” 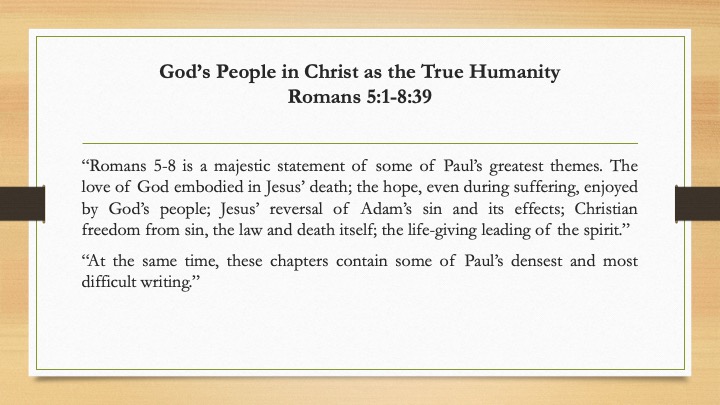 “Romans 5-8 is a majestic statement of some of Paul’s greatest themes. The love of God embodied in Jesus’ death; the hope, even during suffering, enjoyed by God’s people; Jesus’ reversal of Adam’s sin and its effects; Christian freedom from sin, the law and death itself; the life-giving leading of the spirit.”

“At the same time, these chapters contain some of Paul’s densest and most difficult writing.” 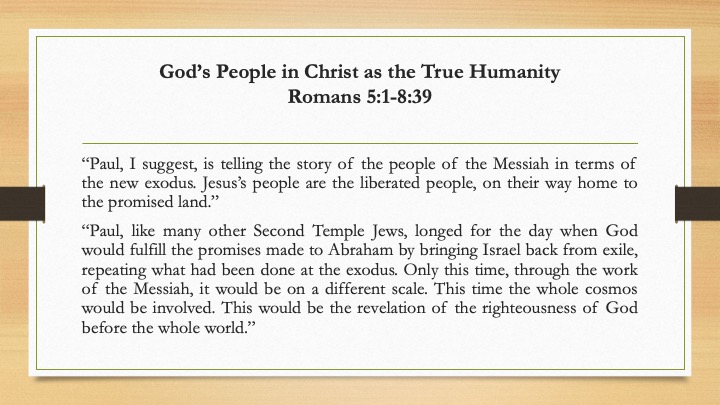 “Paul, I suggest, is telling the story of the people of the Messiah in terms of the new exodus. Jesus’s people are the liberated people, on their way home to the promised land.”

“Paul, like many other Second Temple Jews, longed for the day when God would fulfill the promises made to Abraham by bringing Israel back from exile, repeating what had been done at the exodus. Only this time, through the work of the Messiah, it would be on a different scale. This time the whole cosmos would be involved. This would be the revelation of the righteousness of God before the whole world.” 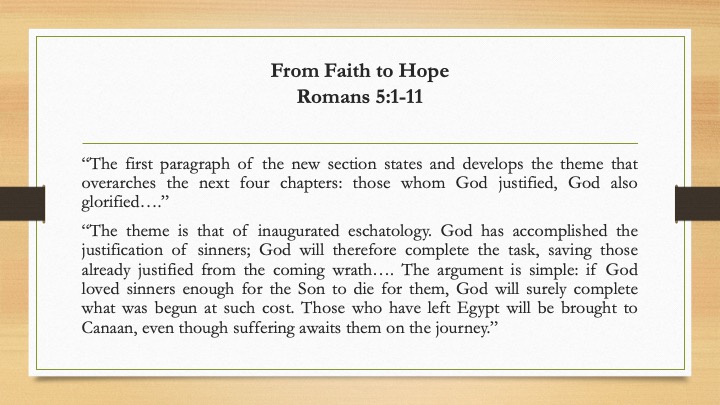 “The first paragraph of the new section states and develops the theme that overarches the next four chapters: those whom God justified, God also glorified….”

“The theme is that of inaugurated eschatology. God has accomplished the justification of sinners; God will therefore complete the task, saving those already justified from the coming wrath…. The argument is simple: if God loved sinners enough for the Son to die for them, God will surely complete what was begun at such cost. Those who have left Egypt will be brought to Canaan, even though suffering awaits them on the journey.” 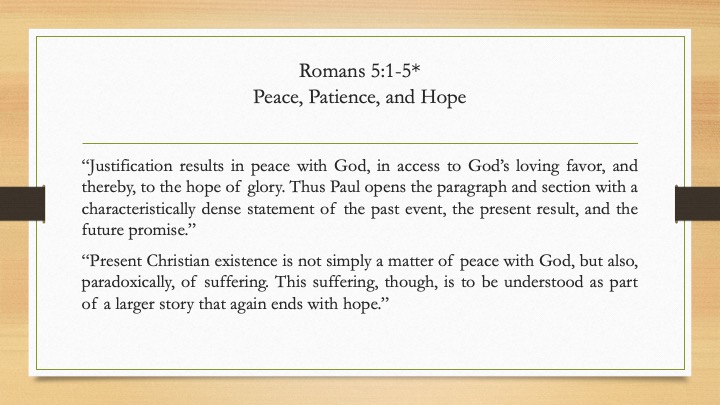 “Justification results in peace with God, in access to God’s loving favor, and thereby, to the hope of glory. Thus Paul opens the paragraph and section with a characteristically dense statement of the past event, the present result, and the future promise.”

“Present Christian existence is not simply a matter of peace with God, but also, paradoxically, of suffering. This suffering, though, is to be understood as part of a larger story that again ends with hope.” 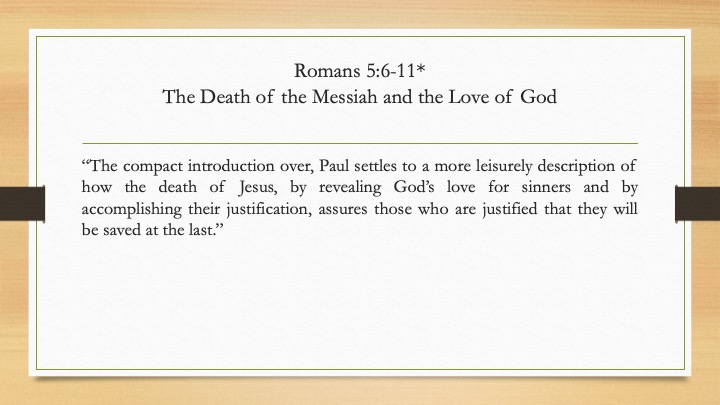 “The compact introduction over, Paul settles to a more leisurely description of how the death of Jesus, by revealing God’s love for sinners and by accomplishing their justification, assures those who are justified that they will be saved at the last.” 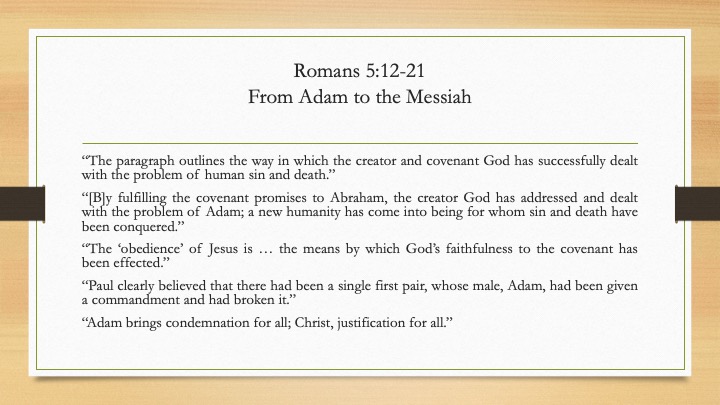 “The paragraph outlines the way in which the creator and covenant God has successfully dealt with the problem of human sin and death.”

“By fulfilling the covenant promises to Abraham, the creator God has addressed and dealt with the problem of Adam; a new humanity has come into being for whom sin and death have been conquered.”

“The ‘obedience’ of Jesus is … the means by which God’s faithfulness to the covenant has been effected.”

“Paul clearly believed that there had been a single first pair, whose male, Adam, had been given a commandment and had broken it.” 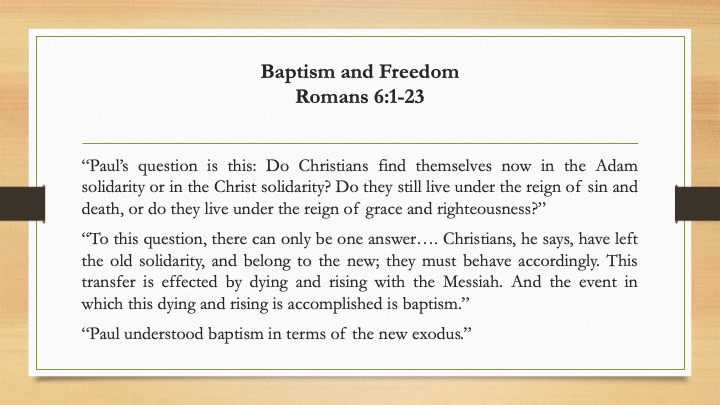 “To this question, there can only be one answer…. Christians, he says, have left the old solidarity, and belong to the new; they must behave accordingly. This transfer is effected by dying and rising with the Messiah. And the event in which this dying and rising is accomplished is baptism.”

“Paul understood baptism in terms of the new exodus.” 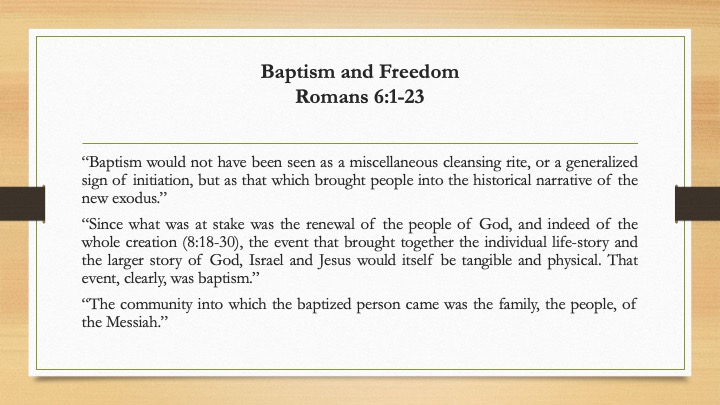 “Baptism would not have been seen as a miscellaneous cleansing rite, or a generalized sign of initiation, but as that which brought people into the historical narrative of the new exodus.”

“Since what was at stake was the renewal of the people of God, and indeed of the whole creation (8:18-30), the event that brought together the individual life-story and the larger story of God, Israel and Jesus would itself be tangible and physical. That event, clearly, was baptism.”

“The community into which the baptized person came was the family, the people, of the Messiah.” 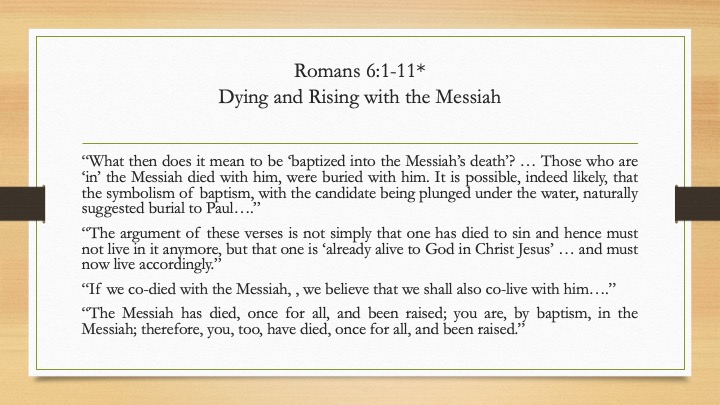 Romans 6:1-11*
Dying and Rising with the Messiah

“What then does it mean to be ‘baptized into the Messiah’s death’? … Those who are ‘in’ the Messiah died with him, were buried with him. It is possible, indeed likely, that the symbolism of baptism, with the candidate being plunged under the water, naturally suggested burial to Paul….”

“The argument of these verses is not simply that one has died to sin and hence must not live in it anymore, but that one is ‘already alive to God in Christ Jesus’ … and must now live accordingly.”

“If we co-died with the Messiah, , we believe that we shall also co-live with him….” 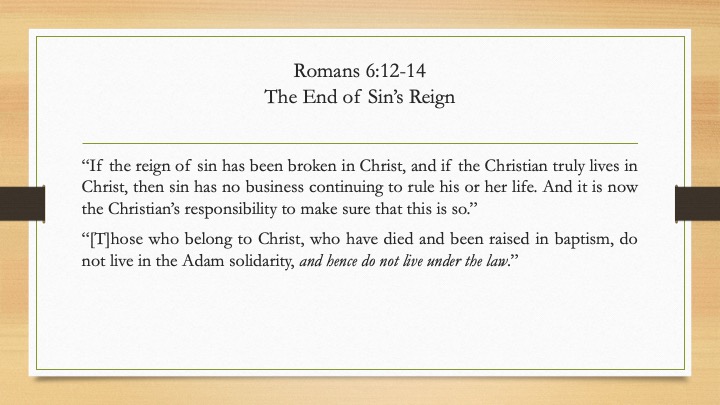 “If the reign of sin has been broken in Christ, and if the Christian truly lives in Christ, then sin has no business continuing to rule his or her life. And it is now the Christian’s responsibility to make sure that this is so.”

“Those who belong to Christ, who have died and been raised in baptism, do not live in the Adam solidarity, and hence do not live under the law.” 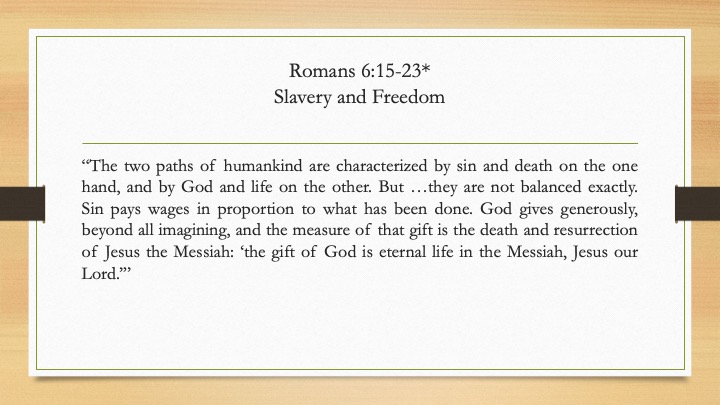 “The two paths of humankind are characterized by sin and death on the one hand, and by God and life on the other. But …they are not balanced exactly. Sin pays wages in proportion to what has been done. God gives generously, beyond all imagining, and the measure of that gift is the death and resurrection of Jesus the Messiah: ‘the gift of God is eternal life in the Messiah, Jesus our Lord.’” 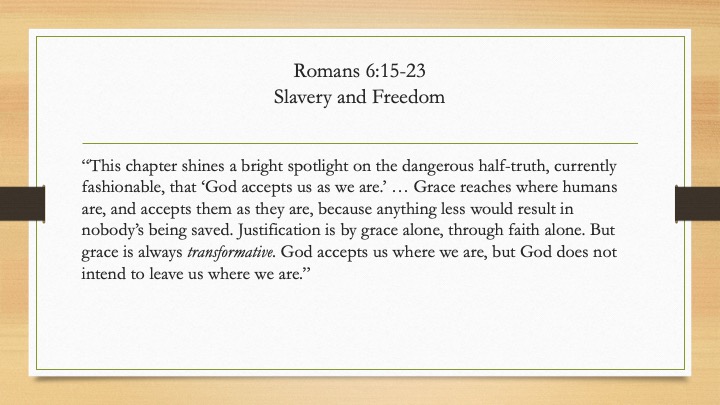 “This chapter shines a bright spotlight on the dangerous half-truth, currently fashionable, that ‘God accepts us as we are.’ … Grace reaches where humans are, and accepts them as they are, because anything less would result in nobody’s being saved. Justification is by grace alone, through faith alone. But grace is always transformative. God accepts us where we are, but God does not intend to leave us where we are.”