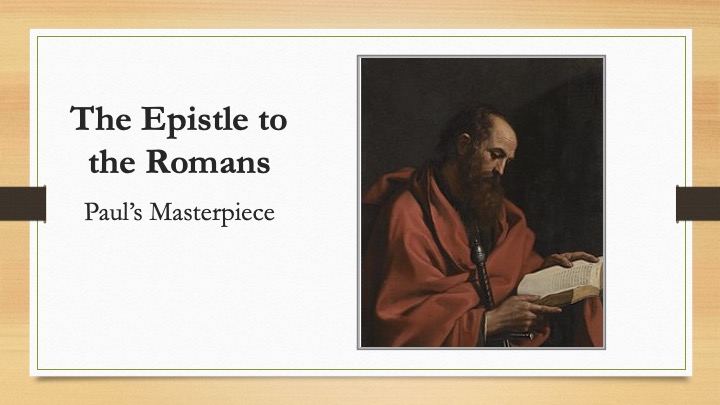 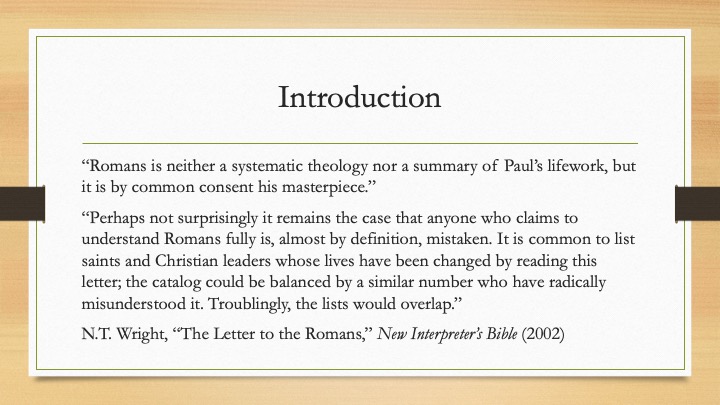 “Romans is neither a systematic theology nor a summary of Paul’s lifework, but it is by common consent his masterpiece.”

“Perhaps not surprisingly it remains the case that anyone who claims to understand Romans fully is, almost by definition, mistaken. It is common to list saints and Christian leaders whose lives have been changed by reading this letter; the catalog could be balanced by a similar number who have radically misunderstood it. Troublingly, the lists would overlap.” 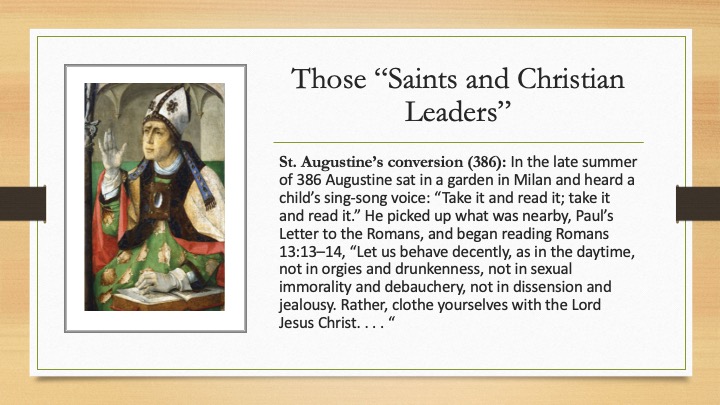 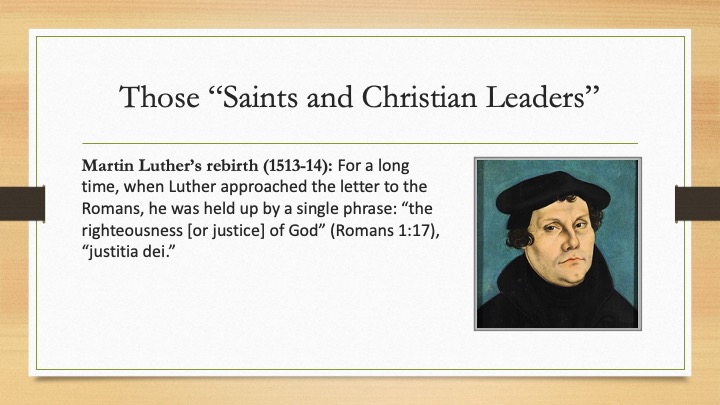 Martin Luther’s rebirth (1513-14): For a long time, when Luther approached the letter to the Romans, he was held up by a single phrase: “the righteousness [or justice] of God” (Romans 1:17), “justitia dei.” 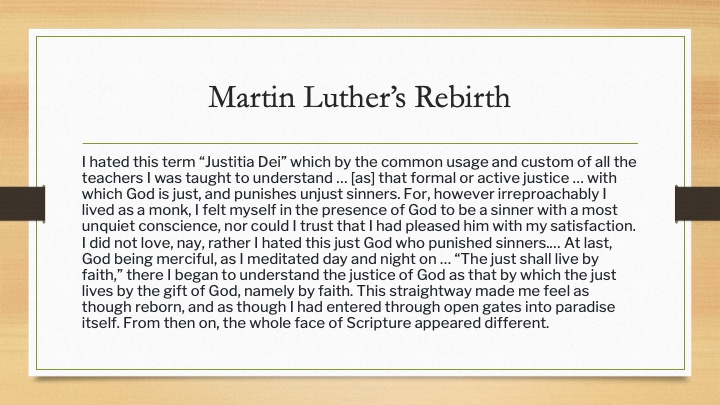 I hated this term “Justitia Dei” which by the common usage and custom of all the teachers I was taught to understand … [as] that formal or active justice … with which God is just, and punishes unjust sinners. For, however irreproachably I lived as a monk, I felt myself in the presence of God to be a sinner with a most unquiet conscience, nor could I trust that I had pleased him with my satisfaction. I did not love, nay, rather I hated this just God who punished sinners.… At last, God being merciful, as I meditated day and night on … “The just shall live by faith,” there I began to understand the justice of God as that by which the just lives by the gift of God, namely by faith. This straightway made me feel as though reborn, and as though I had entered through open gates into paradise itself. From then on, the whole face of Scripture appeared different. 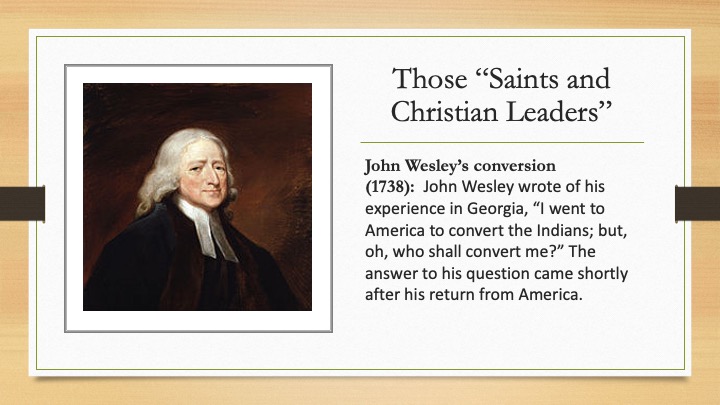 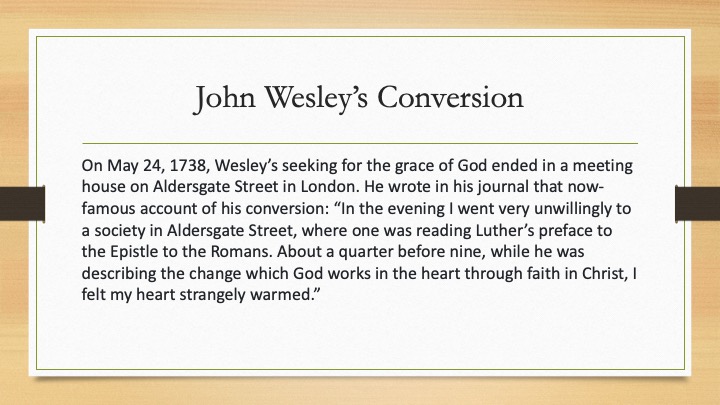 John Wesley’s conversion (1738):  John Wesley wrote of his experience in Georgia, “I went to America to convert the Indians; but, oh, who shall convert me?” The answer to his question came shortly after his return from America.

Karl Barth’s neo-orthodoxy (1922): “In 1919, while working as a pastor in Safenwil, Karl Barth published his first commentary on St. Paul called The Epistle to the Romans which he began in 1916. In 1922, he published a completely rewritten second edition. These commentaries were unusual for their biblical and dialectical theology and their open attacks on humanism. Barth contradicted liberal theologians who considered scripture little more than an account of human religious experience, and who were concerned only with the historic personality of Jesus.” 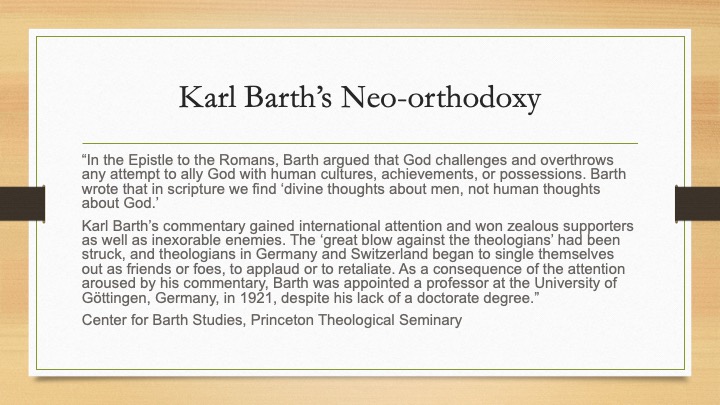 “In the Epistle to the Romans, Barth argued that God challenges and overthrows any attempt to ally God with human cultures, achievements, or possessions. Barth wrote that in scripture we find ‘divine thoughts about men, not human thoughts about God.’

Karl Barth’s commentary gained international attention and won zealous supporters as well as inexorable enemies. The ‘great blow against the theologians’ had been struck, and theologians in Germany and Switzerland began to single themselves out as friends or foes, to applaud or to retaliate. As a consequence of the attention aroused by his commentary, Barth was appointed a professor at the University of Göttingen, Germany, in 1921, despite his lack of a doctorate degree.” 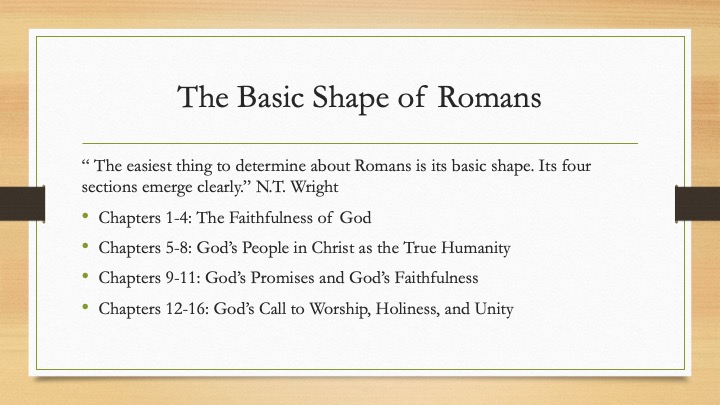 The Basic Shape of Romans

“ The easiest thing to determine about Romans is its basic shape. Its four sections emerge clearly.” N.T. Wright

Chapters 1-4: The Faithfulness of God

Chapters 5-8: God’s People in Christ as the True Humanity 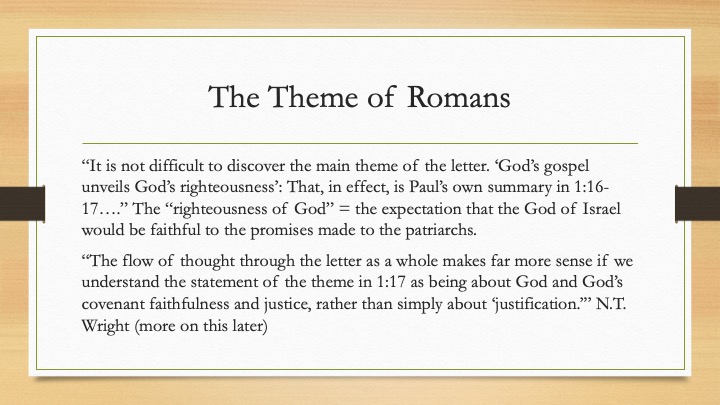 “It is not difficult to discover the main theme of the letter. ‘God’s gospel unveils God’s righteousness’: That, in effect, is Paul’s own summary in 1:16-17….” The “righteousness of God” = the expectation that the God of Israel would be faithful to the promises made to the patriarchs.

“The flow of thought through the letter as a whole makes far more sense if we understand the statement of the theme in 1:17 as being about God and God’s covenant faithfulness and justice, rather than simply about ‘justification.’” N.T. Wright (more on this later). 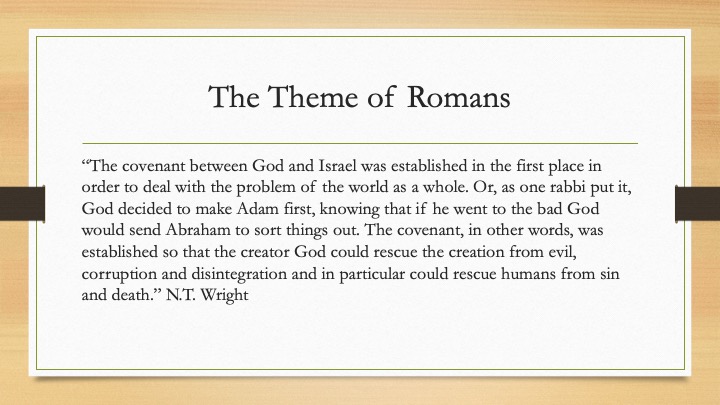 “The covenant between God and Israel was established in the first place in order to deal with the problem of the world as a whole. Or, as one rabbi put it, God decided to make Adam first, knowing that if he went to the bad God would send Abraham to sort things out. The covenant, in other words, was established so that the creator God could rescue the creation from evil, corruption and disintegration and in particular could rescue humans from sin and death.” N.T. Wright 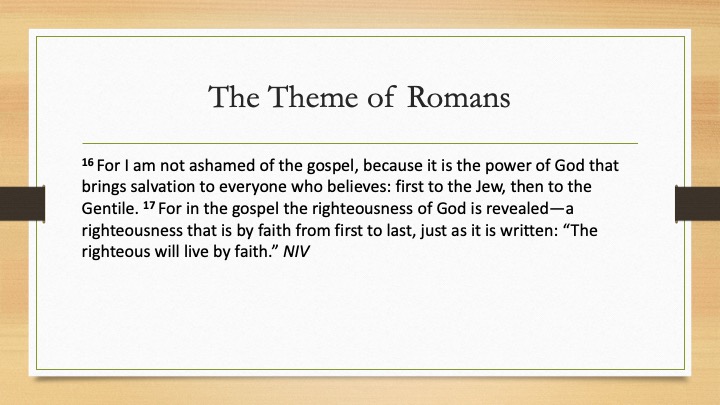 16 For I am not ashamed of the gospel, because it is the power of God that brings salvation to everyone who believes: first to the Jew, then to the Gentile. 17 For in the gospel the righteousness of God is revealed—a righteousness that is by faith from first to last, just as it is written: “The righteous will live by faith.” NIV 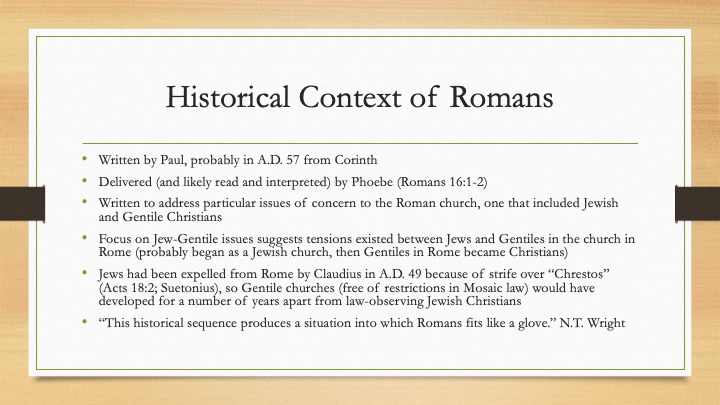 Written by Paul, probably in A.D. 57 from Corinth

Delivered (and likely read and interpreted) by Phoebe (Romans 16:1-2)

Written to address particular issues of concern to the Roman church, one that included Jewish and Gentile Christians

Focus on Jew-Gentile issues suggests tensions existed between Jews and Gentiles in the church in Rome (probably began as a Jewish church, then Gentiles in Rome became Christians)

Jews had been expelled from Rome by Claudius in A.D. 49 because of strife over “Chrestos” (Acts 18:2; Suetonius), so Gentile churches (free of restrictions in Mosaic law) would have developed for a number of years apart from law-observing Jewish Christians

“This historical sequence produces a situation into which Romans fits like a glove.” N.T. Wright 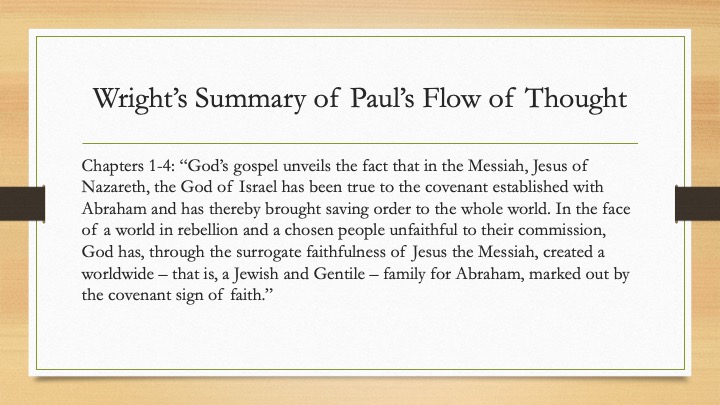 Chapters 1-4: “God’s gospel unveils the fact that in the Messiah, Jesus of Nazareth, the God of Israel has been true to the covenant established with Abraham and has thereby brought saving order to the whole world. In the face of a world in rebellion and a chosen people unfaithful to their commission, God has, through the surrogate faithfulness of Jesus the Messiah, created a worldwide – that is, a Jewish and Gentile – family for Abraham, marked out by the covenant sign of faith.” 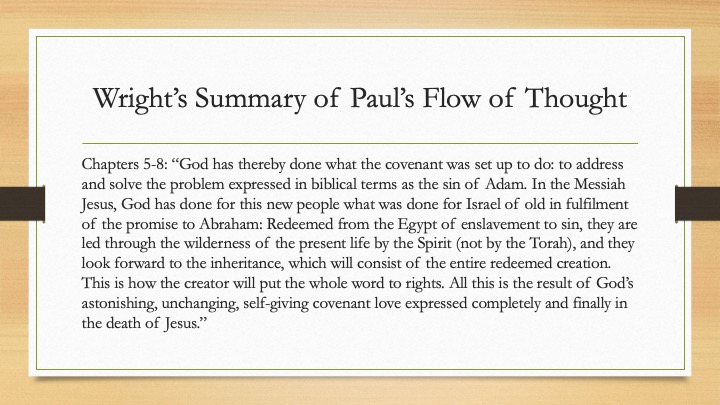 Chapters 5-8: “God has thereby done what the covenant was set up to do: to address and solve the problem expressed in biblical terms as the sin of Adam. In the Messiah Jesus, God has done for this new people what was done for Israel of old in fullfilment of the promise to Abraham: Redeemed from the Egypt of enslavement to sin, they are led through the wilderness of the present life by the Spirit (not by the Torah), and they look forward to the inheritance, which will consist of the entire redeemed creation. This is how the creator will put the whole word to rights. All this is the result of God’s astonishing, unchanging, self-giving covenant love expressed completely and finally in the death of Jesus.” 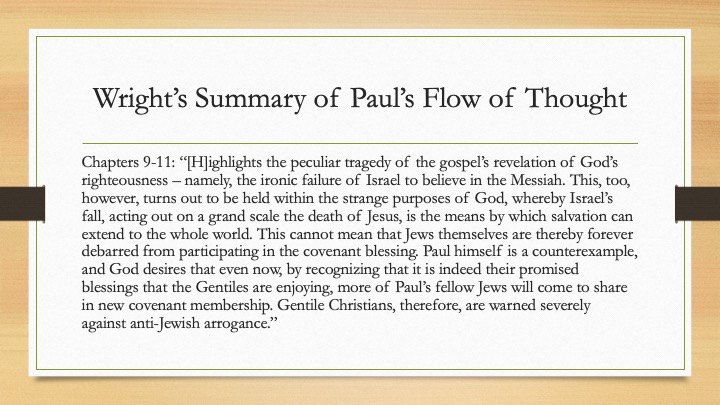 Chapters 9-11: “Highlights the peculiar tragedy of the gospel’s revelation of God’s righteousness – namely, the ironic failure of Israel to believe in the Messiah. This, too, however, turns out to be held within the strange purposes of God, whereby Israel’s fall, acting out on a grand scale the death of Jesus, is the means by which salvation can extend to the whole world. This cannot mean that Jews themselves are thereby forever debarred from participating in the covenant blessing. Paul himself is a counterexample, and God desires that even now, by recognizing that it is indeed their promised blessings that the Gentiles are enjoying, more of Paul’s fellow Jews will come to share in new covenant membership. Gentile Christians, therefore, are warned severely against anti-Jewish arrogance.” 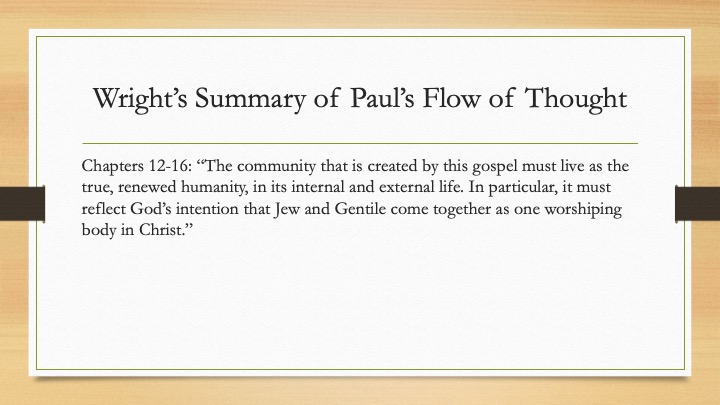 Chapters 12-16: “The community that is created by this gospel must live as the true, renewed humanity, in its internal and external life. In particular, it must reflect God’s intention that Jew and Gentile come together as one worshiping body in Christ.”