Christianity and the 21st Century

Faith in a Science/Technology Saturated Society

"The heavens declare the glory of God; the skies proclaim the work of his hands.  Day after day they pour forth speech; night after night they display knowledge.  There is no speech or language where their voice is not heard.  Their voice goes out to all the earth, their words to the ends of the world.

In the heavens he has pitched a tent for the sun, which is like a bridegroom coming forth from his pavilion, like a champion rejoicing to run his course.  It rises at one end of the heavens and makes its circuit to the other; nothing is hidden from its heat." 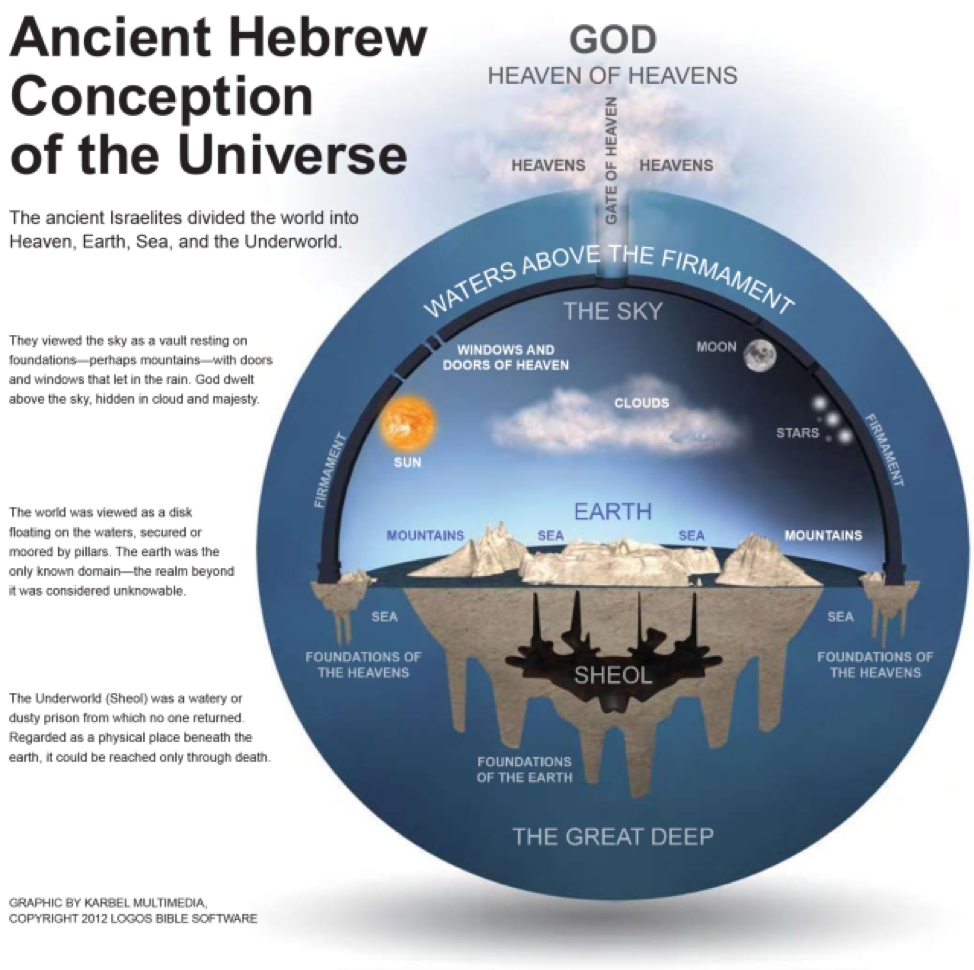 There are many tensions in the our biblical texts and dogma.


Mostly we ignore them,

just accept their mystery, or

attempt to reconcile them.

For those of scientific or scholarly persuasions, one ever-present tension is near the top of the list: the physical and biological worlds as we know them don’t work the way we were taught in Sunday school.

In era when Scripture was written, it expressed the TSU model because that was the cultural understanding of physical reality.

Sciences with direct implications for a biblical worldview

Judaism: While all of the major movements of American Judaism – including the Reconstructionist, Reform, Conservative and Orthodox branches – teach that God is the creator of the universe and all life, Jewish teachings generally do not find an inherent conflict between evolutionary theory and faith.

Catholicism: The Catholic Church generally accepts evolutionary theory as the scientific explanation for the development of all life. However, this acceptance comes with the understanding that natural selection is a God-directed mechanism of biological development and that man’s soul is the divine creation of God.

Episcopal Church: In 1982, the Episcopal Church passed a resolution to “affirm its belief in the glorious ability of God to create in any manner, and in this affirmation reject the rigid dogmatism of the ‘Creationist’ movement.” The church has also expressed skepticism toward the intelligent design movement.

United Methodist Church: In 2008, the church’s highest legislative body passed a resolution saying that “science’s descriptions of cosmological, geological, and biological evolution are not in conflict with [the church’s] theology.” Moreover, the church states that “many apparent scientific references in [the] Bible … are intended to be metaphorical [and] were included to help understand the religious principles, but not to teach science.”

Truly, I say to you, whoever does not receive the kingdom of God like a child shall not enter it.”

At that time Jesus, full of joy through the Holy Spirit, said, “I praise you, Father, Lord of heaven and earth, because you have hidden these things from the wise and learned, and revealed them to little children.”

Timothy, guard what has been entrusted to your care.  Turn away from godless chatter and the opposing ideas of what is falsely called knowledge…

Every prudent man acts out of knowledge, but a fool exposes his folly.

It is not good to have zeal without knowledge, nor to be hasty and miss the way.

What shall we say of the mathematical sciences? Shall we deem them to be the dreams of madmen? Nay, we cannot read the writings of the ancients on these subjects without the highest admiration; an admiration which their excellence will not allow us to withhold… But if the Lord has been pleased to assist us by the work and ministry of the ungodly in physics, dialectics, mathematics, and other similar sciences, let us avail ourselves of it, lest, by neglecting the gifts of God spontaneously offered to us, we be justly punished for our sloth.

Presbyterian Church (U.S.A.): In 1969, the Presbyterian Church’s governing body amended its previous(19th century) position on evolution to affirm that evolution and the Bible do not contradict each other. Still, the church has stated that it “should carefully refrain from either affirming or denying the theory of evolution,” and church doctrine continues to hold that man is a unique creation of God, “made in His own image.”

In 2016 PASTCF - Presbyterian Association for Science, Technology, and the Christian Faith proposed  "A Proposed Affrirmation of the Christian Faith" that was approved on a vote of 305-264 and approved that it be distributed yp all councils of the Presbyterian Church (USA) (synods, presbyteries, sessions) for study,flection and, where possible, their approval.

From early in its life the Christian church has affirmed metaphorically that God is the author of two books of revelation: the Book of Scripture (the Old and New Testaments) and the Book of Nature. Because God is the author of both and God neither deceives nor is incoherent, these books cannot in principle be in conflict even though they are expressed through fallible creatures.

However, over the centuries some Christians have sought to deny observations of Nature by reference to Scripture. In the 5th century CE Augustine warned that claims about Nature, contrary to human reason and experience but supposedly derived from Scripture, should be avoided, lest they make Christians seem ignorant and the objects of scornful laughter. Yet we recognize that God has called forth in Homo sapiens an exploratory curiosity and a critical intellect. A fruit of these gifts is our capacity for scientific inquiry.

The results of this inquiry are provisional because they are open to new discoveries and revision. Yet these results are also highly reliable because the Creation itself, through observation and experimentation, attests to them. Scientific inquiry to date has provided descriptions and ever more profound understandings of the scope of God’s creation in space and time, of the myriad of creatures which inhabit and have inhabited this Earth, and of the means by which the Creation itself has shared in the work of creation.

In light of these discoveries, today with confidence we can affirm:

Regarding the physical universe…

•That God has been calling this universe into being for at least 13.8 billion years and continues calling upon the Creation to bring forth new creatures;

•That, in response to God’s creative call, the Earth took form at least 4.6 billion years ago;

Regarding the biological universe…

•That, in response to God’s call, living creatures emerged on the Earth at least 3.6 billion years ago;

•That God has connected all life on Earth in a network of kinship by virtue of biological evolution from common ancestors;

•That, in response to God’s call, we Homo sapiens (modern humans) emerged, …as a species over more than 6 million years of hominin development;

•That, since our line of descent split from …the chimpanzees and bonobos, we Homo sapiens were preceded by at least eighteen already identified hominin species, all of which are now extinct;

•That, in the providence of God, we Homo sapiens have come to exercise extraordinary power over other creatures and their habitats, the Earth’s geological structures, and the meteorological systems of the Earth;

•That, by virtue of the powers of intellect and creativity called forth in us by God, we bear exceptional responsibility for the future of the Earth and all its constitutive creatures.

“The tension between… ‘the love of learning and the desire for God’ is mitigated in hearing the bible read aloud.”

The framework wasn’t the main point.  Thus as knowledge evolves, we continue to use Scripture as the authoritative revelation of the spiritual nature of reality. Our scientific understandings allow us to alter and adjust the framework so that God shines ever more brightly through the pages of the bible.

Contemplative disciplines such as Lectio Divina and Centering Prayer.

the sphere of God’s actions is historical

primacy of the I:Thou relationship

Shared criteria of scientists and theologians

•A community of many levels

•Process theology: evolutionary expansion of the presence of God in creation

•Return to the biblical concept of the Holy Spirit; said to indwell, renew, empower, inspire, guide and reconcile.

But isn’t a new paradigm radical?

Each new paradigm arose from a fresh experience of the biblical message of Christ, as well as from institutional crises and external challenges.

Elements of an integrated paradigm

•Serious but not literal

•Presence of the Holy Spirit

•Interconnectedness of all creation (spiritual and material)

Audio of This Class