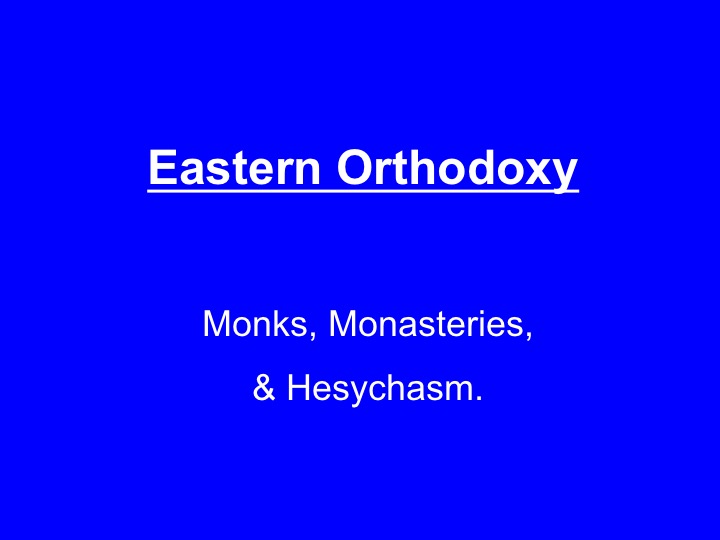 Today is our last class on the Eastern Orthodox branch of Christianity. It is of course almost impossible to cover all aspects of a different religion in a few short classes, so we have tried to concentrate on what is distinctive (and probably unknown) to many people in the class.  It is unknown primarily because we simply do not get exposed to this branch of Christianity except through occasional snippets of video on world wide news.  And few of us get much exposure to other faith practices in our normal education.

So the distinctive things I tried to point out earlier were things like the unusual demographics such as this branch of Christianity being heavily concentrated in a small number of countries in Eastern Europe, and then we did some investigation to try to learn why that was. That entailed a very focused look at the early history of the Roman empire and Christianity. And I hope it became a little clearer why this branch of Christianity ended up being concentrated in Slavic language countries in Eastern Europe. Then we shifted our studies to some detailed views of the Eastern Orthodox liturgies and experience how those liturgies are seen in Sunday church services.

Today though I want to focus on one last thing that is very distinctive in this branch of Christianity – and that is the monastic life.

And yes, you can see there is a new word for the day. Hesychasm. And we will explain what that is before we finish today. 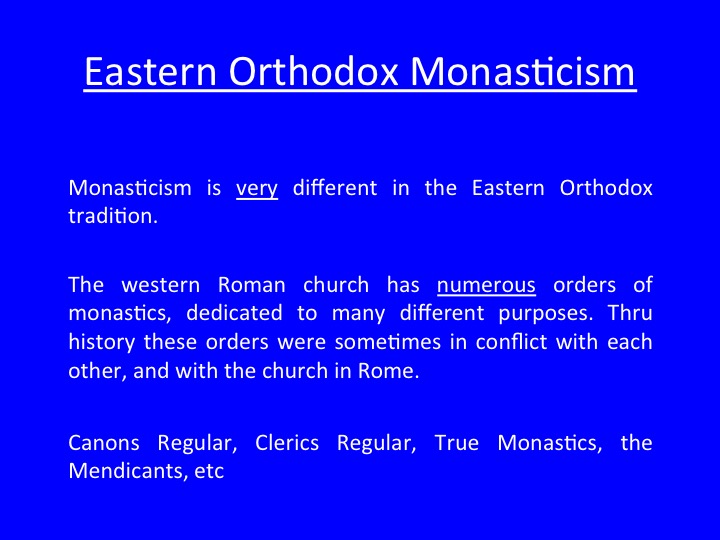 Monasticism is different in the Eastern Orthodox tradition.

Those of us who are Protestant are frankly not that familiar with monasticism. If you recall our study of Christianity during the Reformation Era. Martin Luther rather ruthlessly criticized monasticism and insisted it was not scriptural and therefore called for the elimination of all of the monastic orders of the Roman church.  Calvin later agreed with him. They also attacked what they viewed as unseemly behavior of  the monastics, who seemed to be living a soft life compared to regular Christians.

So there are very few Presbyterian monks! And our worldview of monks and monasticism is often influenced by occasional bad movies out of Hollywood about monastics in the western Roman church.

It is important to understand that monasticism has been extremely complicated in the western Roman Church. There is not one uniform type of monastic – instead there are numerous religious orders.

Some of the orders: Canons Regular, Clerics Regular, True Monastics, the Mendicants. Canons Regular are typically priests living in a community but engaging in public ministry of liturgies and sacraments.  Clerics Regular are also Catholic priests who join a religious order but then devote themselves almost exclusivity to pastoral care, or educational work in a community or in missionary work. The True Monastics are those who join a monastic order, often living their lives in a monastery. Mendicant orders are those who developed a lifestyle of poverty, traveling and living in urban areas for preaching, evangelization, and ministry to the poor. 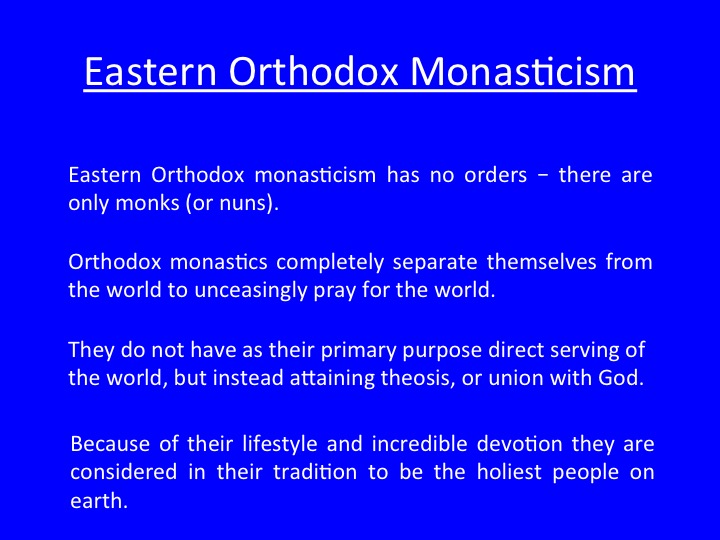 In Eastern Orthodoxy monasticism holds a very special and important place: "Angels are a light for monks, monks are a light for laymen" (St. John Klimakos). Orthodox monastics separate themselves from the world in order to pray unceasingly for the world.

They do not, in general, have as their primary purpose the running of social services, but instead are concerned with attaining theosis, or union with God.

Because of their lifestyle and incredible devotion they are considered in their tradition to be the holiest people on earth. 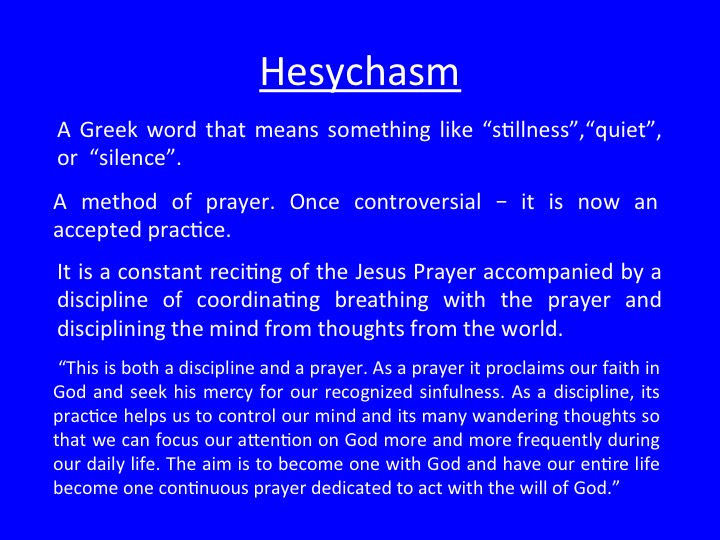 Our new word for the week. You may already heard of it but it is an important concept in Eastern Orthodoxy and particularly in the monastic tradition. The actual word – a Greek word – means something like stillness, quiet, or silence. It refers especially to a method of prayer – one that is practiced constantly at Mount Athos.

It has a long and controversial history in the Eastern church, although today the controversy is over. It was pretty well settled in the early middle ages. It is now an accepted practice.

Although I am not an expert in it, my reading indicates Hesychasm is a rather complicated method of prayer consisting of a constant reciting of the Jesus prayer accompanied by a discipline of coordinating of breathing with the prayer and a constant watchfulness to keep Satan at bay*.

*1 Peter 5:8:    Be clearheaded. Keep alert. Your accuser, the devil, is on the prowl like a roaring lion, seeking someone to devour.

The Jesus Prayer - "Lord Jesus Christ, have mercy on me, a sinner."

The constant praying of the Jesus prayer is a recommended practice in all of Orthodoxy, not just monks. This is an excerpt from a Jesus Prayer brochure that is often presented to Orthodox Christians.

“This is both a discipline and a prayer. As a prayer it proclaims our faith in God and seek his mercy for our recognized sinfulness. As a discipline, its practice helps us to control our mind and its many wandering thoughts so that we can focus our attention on God more and more frequently during our daily life. The aim is to become one with God and have our entire life become one continuous prayer dedicated to act with the will of God.”

With all of that as background, we are now going to visit a very special place in Eastern Orthodox monasticism. 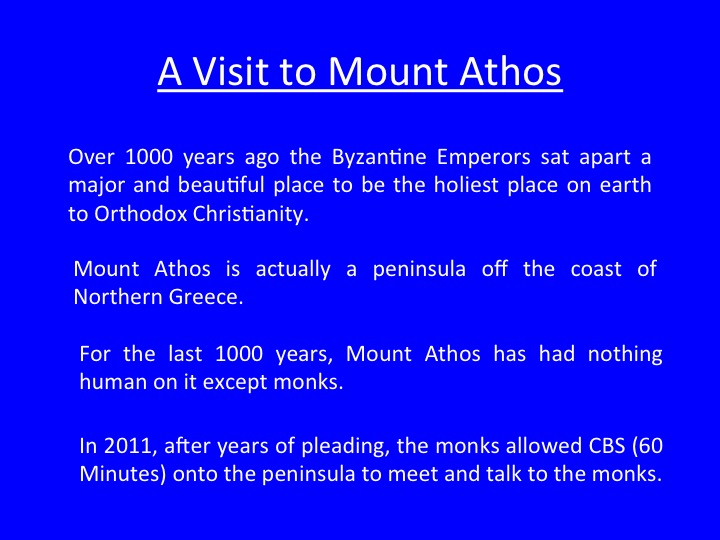 Over 1000 years ago the Byzantine Emperors sat apart a major and beautiful place to be the holiest place on earth to Orthodox Christianity.

Mount Athos is actually a peninsula off the coast of Northern Greece.

For the last 1000 years, Mount Athos has had nothing human on it except monks – and monasteries for the monks.

And since it is so highly protected from the world most people are only dimly aware of it. But In 2011, after years of pleading, the monks allowed CBS (60 Minutes) onto the peninsula to meet and talk to the monks. They made a documentary of the visit and we are going to watch it together. 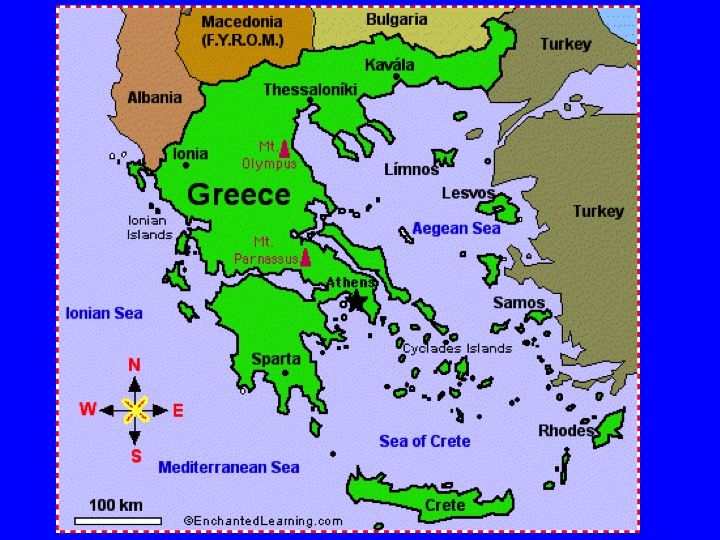 Let’s first look at a map of Greece to see where Mount Athos is.  If you look at what looks like a hand with three fingers coming out into the Aegean; the most eastern finger is the peninsula of Mount Athos. 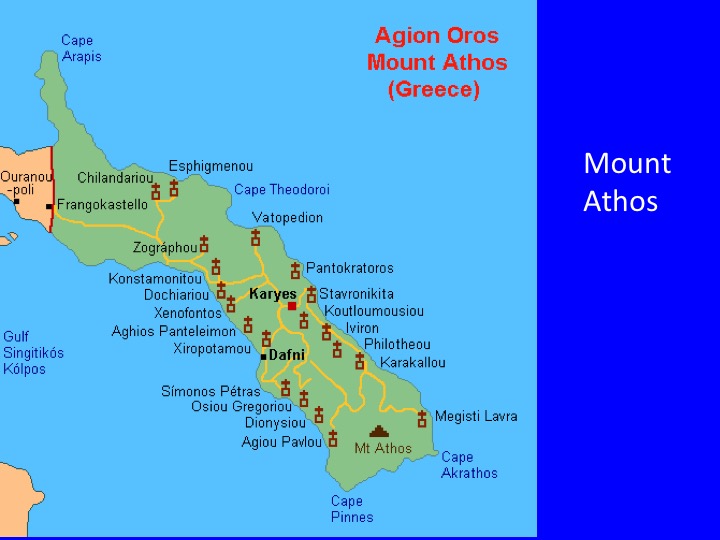 This is the Mount Athos Peninsula. Ii is a mountainous land and forested. The red boxes with crosses represent 20 rather fantastic Byzantine monasteries built into the landscape. Every major country in Eastern Orthodoxy has at least one monastery there. You will note the red line boundary separating it from Greece. The only access to the peninsula is not by land but by a port at the tiny village of Dafni, shown here. Dafni has a population of 38. A second small village is Karyes which houses the administrative center of the Holy Mountain. Population about 140.

So without further ado we are now going to pay a visit to the Holy Mountain via the 60 Minutes documentary. I will play it all the way through without interruption because it is well done and does not require any explanation.  And I believe many of the things we have covered will be evident in this video. 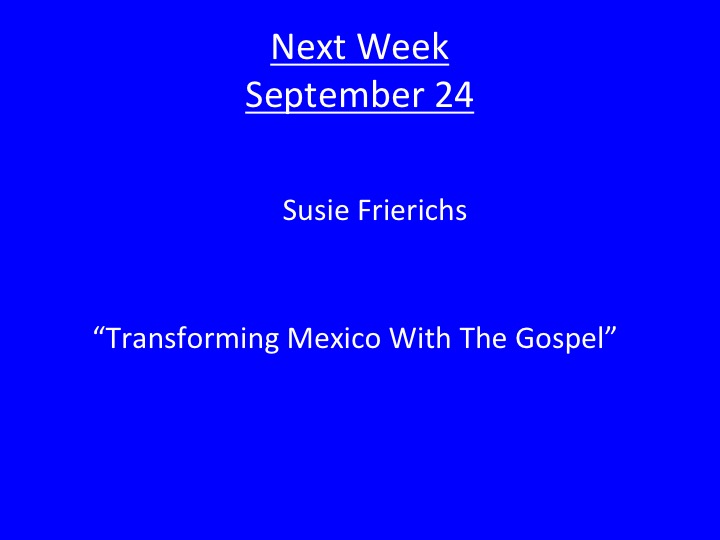