History of the Bible Lesson 6
Writing and Copying 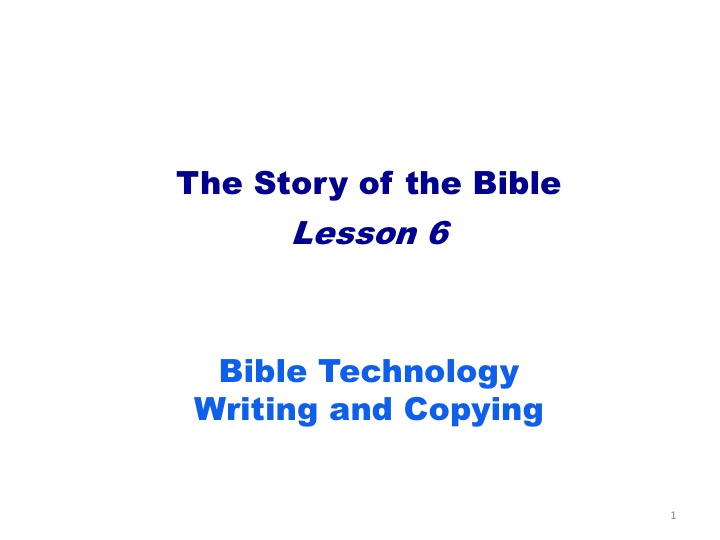 History of the Bible Lesson 6 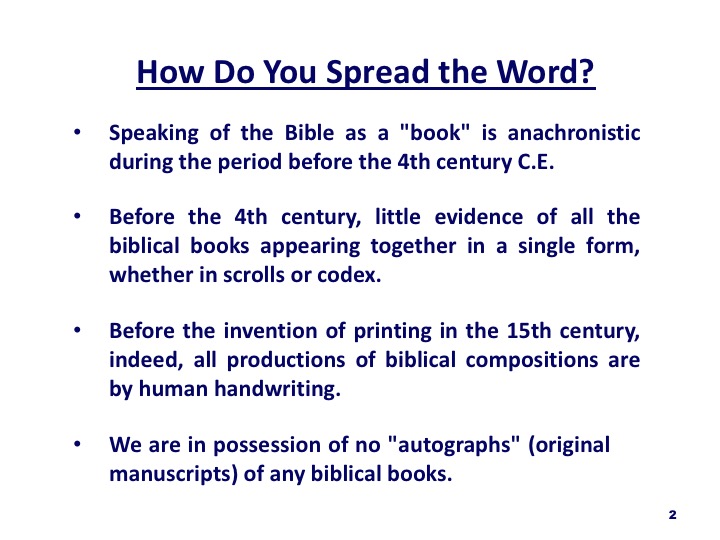 How Do You Spread the Word?

Let's start by asking a simple question. If you are a young and struggling religious movement under constant persecution from a powerful empire, how do you spread the world, especially if that religious movement is understood in light of a sacred text. Well, the answer is that it will be quite difficult, because there are some fundamental limitations to your ability to spread that word. Here are some of the realities:

Speaking of the Bible as a "book" is anachronistic during the period before the 4th century C.E.

Before the 4th century, there is little archeological evidence of all the biblical books appearing together in a single form, whether in scrolls or codex.

Before the invention of printing in the 15th century, indeed, all productions of biblical compositions are by human handwriting.

We are in possession of no "autographs" (original manuscripts) of any biblical books.

Let's look at this with a timeline: 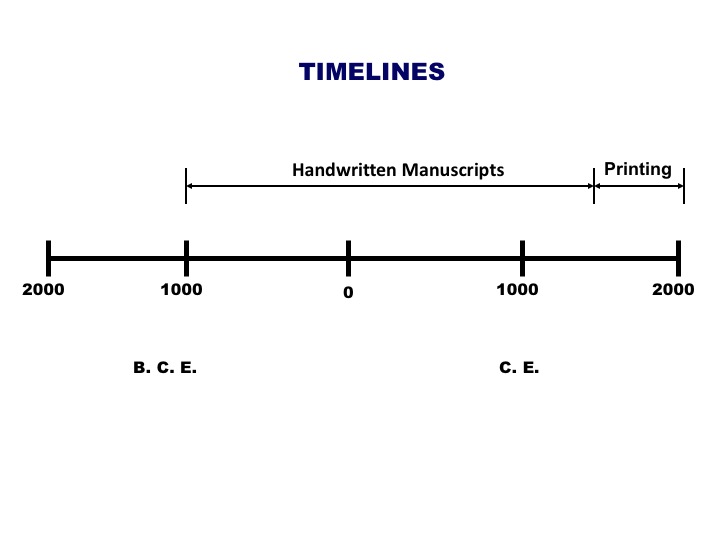 During this 4000 year period between early oral narratives of the patriarchs (Abraham, etc) and the 20th century the written bible was only handwritten manuscripts from 1000 B.C.E. to the 15th century of the common era. Handwriting and hand copying were extremely important to the preservation of that tradition.

Another implication of this timeline is that during all of this period of handwritten manuscripts this religious text was predominately an oral (from the mouth) and an aural (to the ear) performance. Although the texts were written, there were so few available that all were experienced as oral presentations. So it was an oral tradition until the printing press began to change that. But because the oral performances were backed by written text the content and teaching was under much better control than from a pure oral transmission. 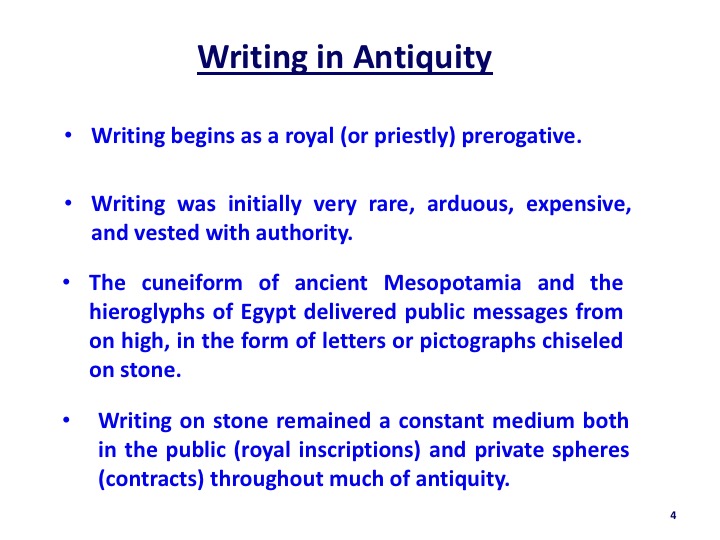 Writing begins a a royal (or priestly) prerogative.

Writing was initially rare, arduous, expensive, and vested with authority.

The cuneiform of ancient Mesopoamia and the hieroglyphs of Egypt delivered public messages from on high. in the form of letters or pictographs chiseled on stone.

Writing on stone remained a constant medium both in the public (royal inscriptions) and private spheres (contracts) throughout much of antiquity.

The Law revealed to the people by Moses was "the writing of God, graven on the tables [of stone]" (Exodus 32: 16). 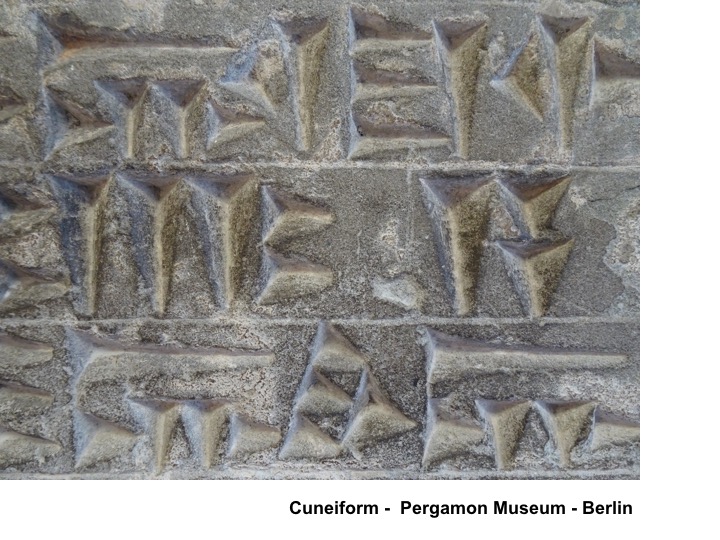 One of our class members (Shirley Kopp) is in Germany on travel now and sent me this picture from the Pergamon Museum in Berlin. It is a 6 foot by 3 foot stone slab with cuneiform carved symbols. My guess is that it is very ancient, and probably from somewhere in Mesopotamia. Have no idea what it says. 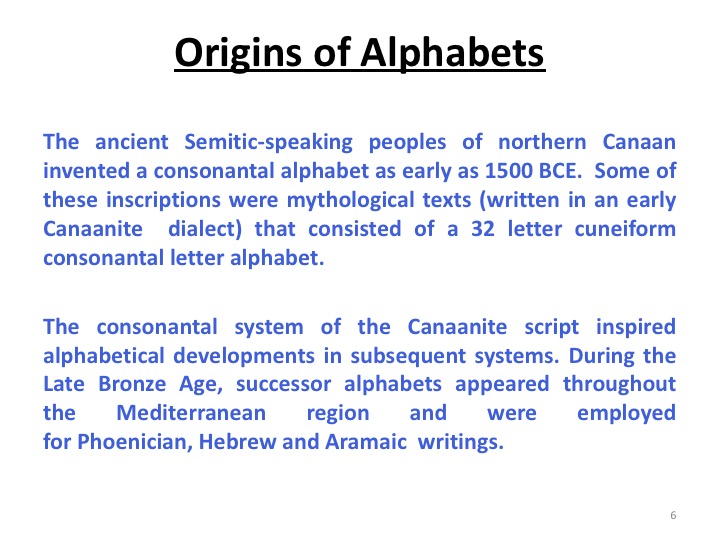 The ancient Semitic-speaking peoples of northern Canaan invented a consonantal alphabet as early as 1500 BCE.  Some of these inscriptions were mythological texts (written in an early Canaanite dialect) that consisted of a 32-letter cuneiform consonantal alphabet.

The consonantal system of the Canaanite script inspired alphabetical developments in subsequent systems. During the Late Bronze Age, successor alphabets appeared throughout the Mediterranean region and were employed for Phoenician, Hebrew and Aramaic  writings. 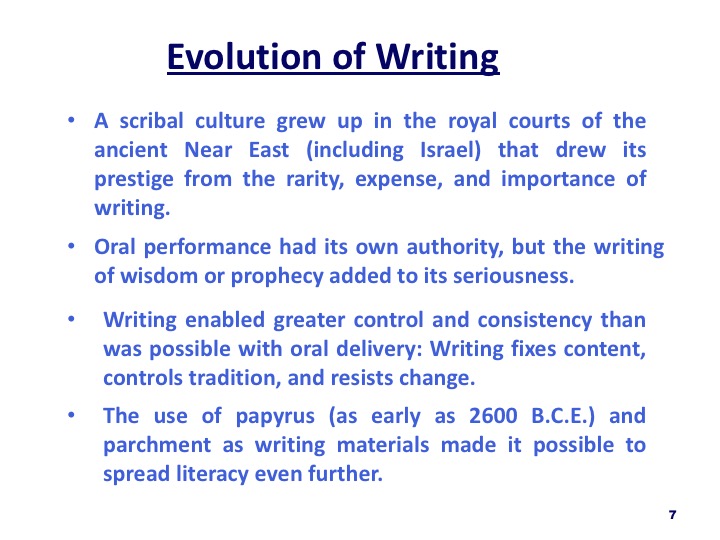 A scribal culture grew up in the royal courts of the ancient Near East (including Israel) that drew its prestige from the rarity, expense, and importance of writing.

Oral performance had its own authority, but the writing of wisdom or prophecy added to its seriousness.

The use of papyrus (as early as 2600 B.C.E.) and parchment as writing materials made it possible to spread literacy even further. 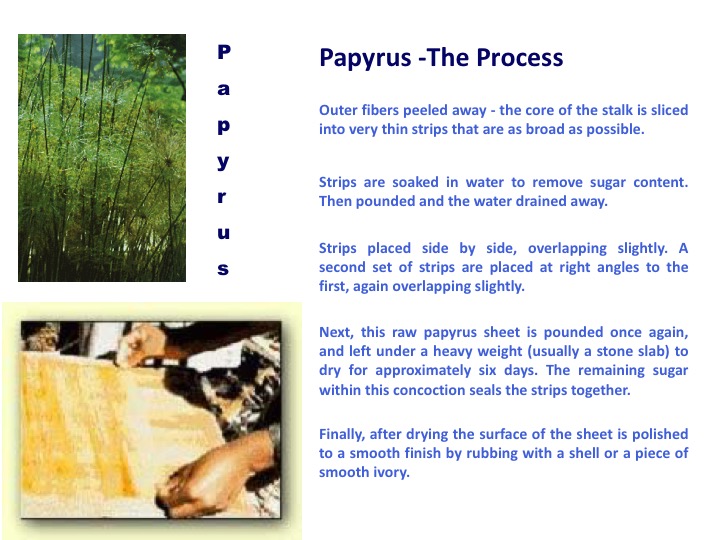 Outer fibers peeled away - the core of the stalk is sliced into very thin strips that are as broad as possible.

Strips are soaked in water to remove sugar content. Then pounded and the water drained away.

Next, this raw papyrus sheet is pounded once again, and left under a heavy weight (usually a stone slab) to dry for approximately six days. The remaining sugar within this concoction seals the strips together.

Finally, after drying the surface of the sheet is polished to a smooth finish by rubbing with a shell or a piece of smooth ivory. 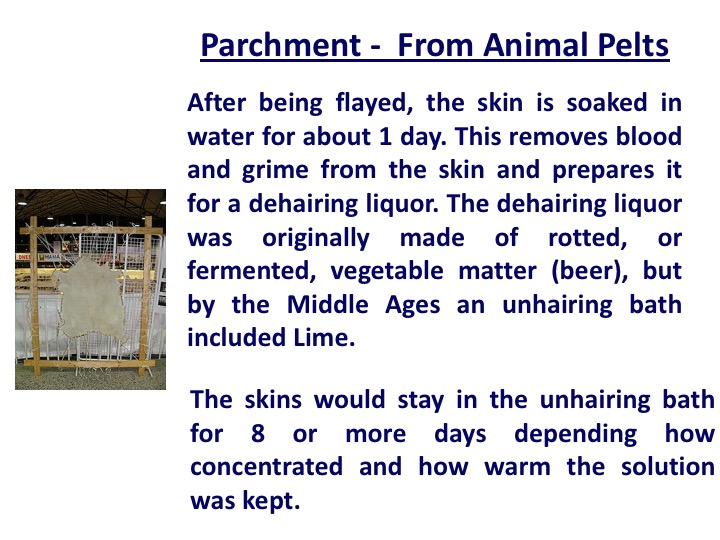 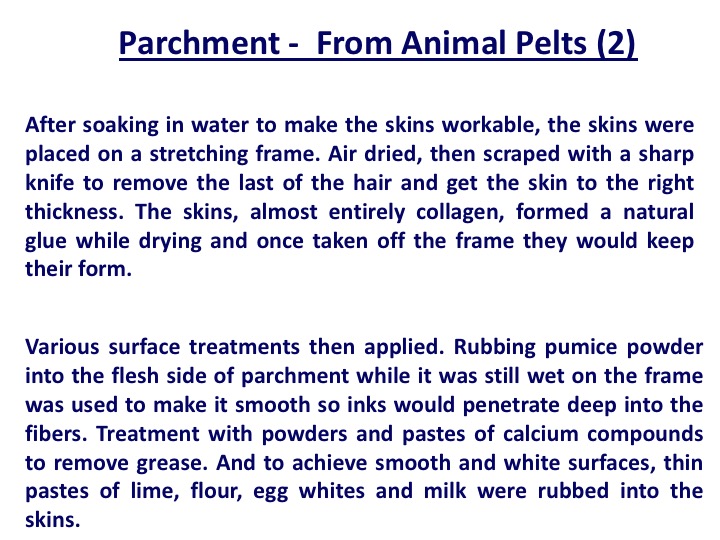 After being flayed, the skin is soaked in water for about 1 day. This removes blood and grime from the skin and prepares it for a de-hairing liquor. The dehairing liquor was originally made of rotted, or fermented, vegetable matter (beer), but by the Middle Ages an un-hairing bath included Lime.

The skins would stay in the un-hairing bath for 8 or more days depending how concentrated and how warm the solution was kept.

After soaking in water to make the skins workable, the skins were placed on a stretching frame. Air dried, then scraped with a sharp knife to remove the last of the hair and get the skin to the right thickness. The skins, almost entirely collagen, formed a natural glue while drying and once taken off the frame they would keep their form.

Various surface treatments then applied. Rubbing pumice powder into the flesh side of parchment while it was still wet on the frame was used to make it smooth so inks would penetrate deep into the fibers. Treatment with powders and pastes of calcium compounds to remove grease. And to achieve smooth and white surfaces, thin pastes of lime, flour, egg whites and milk were rubbed into the skins. 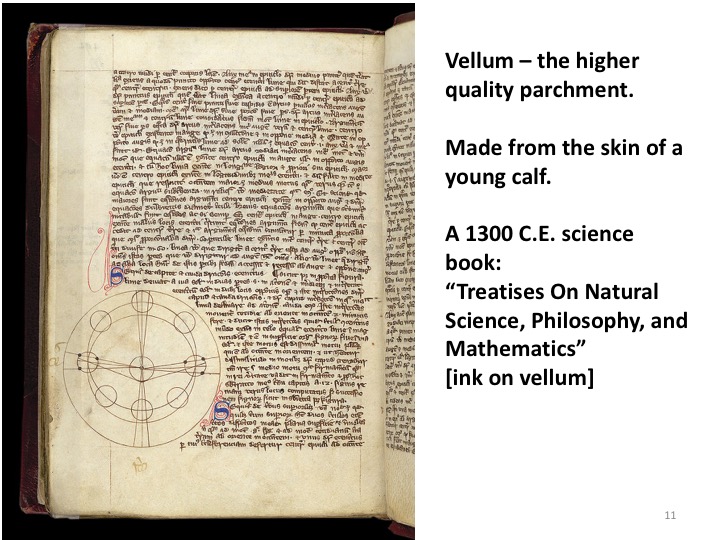 Made from the skin of a young calf.

Note the high quality, even the preservation of colors, after 8 centuries. 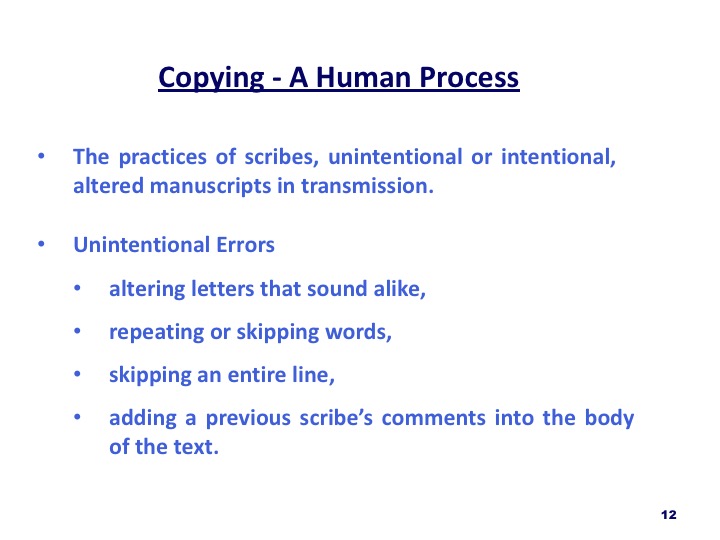 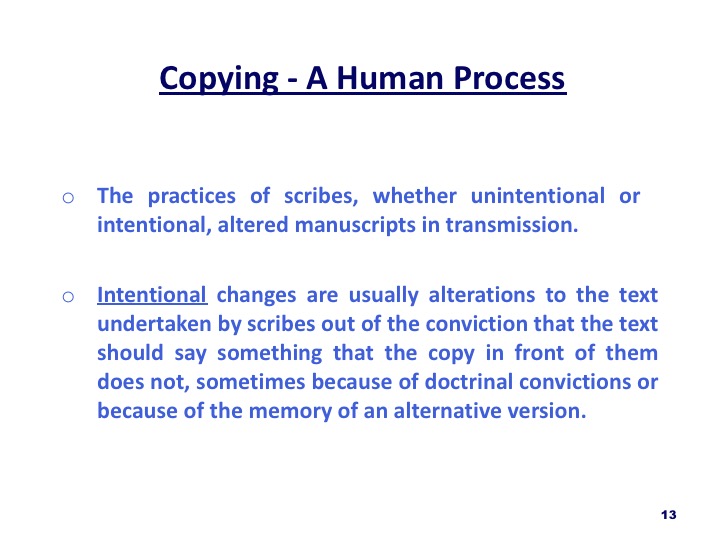 The practices of scribes, unintentional or intentional, altered manuscripts in transmission.

•adding a previous scribe’s comments into the body of the text.

And Then Intentional Errors

Intentional changes are usually alterations to the text undertaken by scribes out of the conviction that the text should say something that the copy in front of them does not, sometimes because of doctrinal convictions or because of the memory of an alternative version. 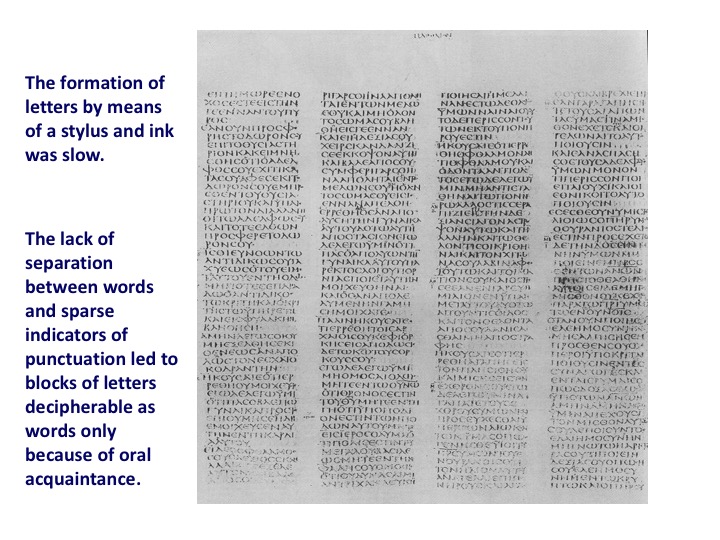 A Sheet From Codex Sinaiticus.

Let's talk a little about why error free copying was so difficult, even by dedicated copyists.  Here is a page from Codex Sinaiticus - a famous Bible we will talk about next week.

The formation of letters by means of a stylus and ink was slow (the development of a cursive style of writing came late), especially when the scribe wrote in majuscules (capital letters) rather than minuscules (non-capital letters ).

The copying of manuscripts was made more difficult because of the lack of separation between words and sparse indicators of punctuation. Often, scribes were faced with blocks of letters only decipherable as words if the scribe may have had an oral acquaintance of the text. 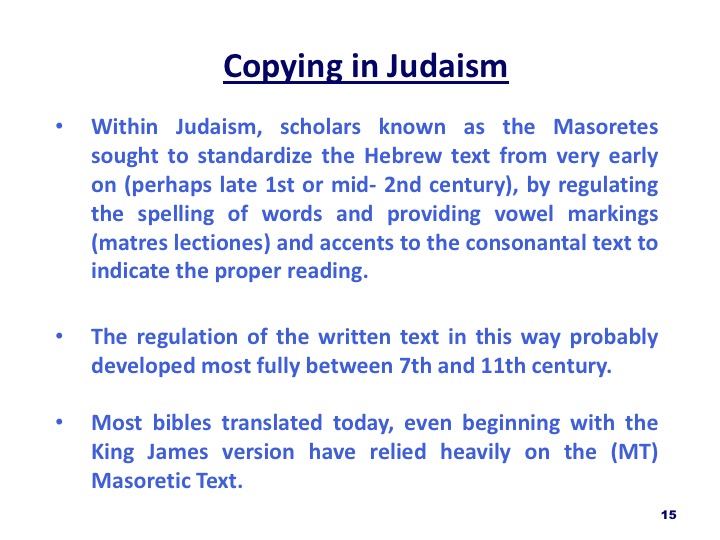 Within Judaism, scholars known as the Masoretes sought to standardize the Hebrew text from very early on (perhaps late 1st or mid- 2nd century), by regulating the spelling of words and providing vowel markings (matres lectiones) and accents to the consonantal text to indicate the proper reading.

The regulation of the written text in this way probably developed most fully between 500 and 700 C.E.

Most bibles translated today, beginning with the King James version have relied heavily on the (MT) Masoretic Text. If your read the Preface to whatever Bible translation you rely on you will probably find a mention that most of the text in the Old Testament was translated from the MT. 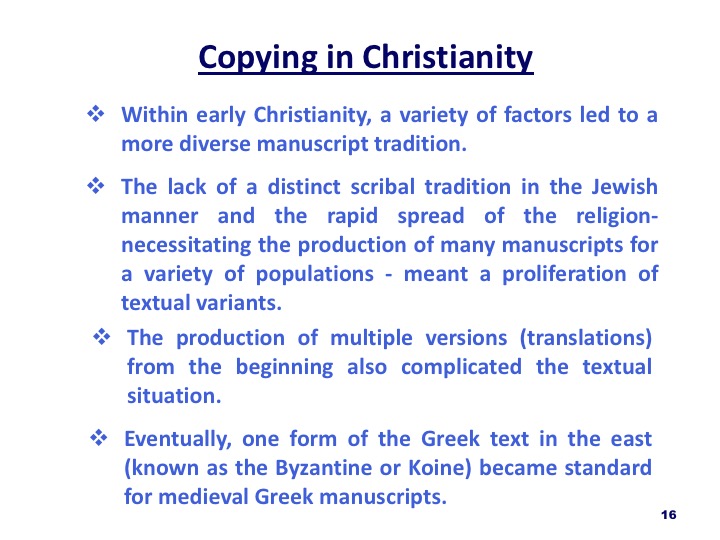 Within early Christianity, a variety of factors led to a more diverse manuscript tradition.

The lack of a distinct scribal tradition in the Jewish manner and the rapid spread of the religion-necessitating the production of many manuscripts for a variety of populations - meant a proliferation of textual variants.

The production of multiple versions (translations) from the beginning also complicated the textual situation. We will learn about that aspect of the development of the Bible in two weeks.

Eventually, one form of the Greek text in the east (known as the Byzantine or Koine) became standard for medieval Greek manuscripts. 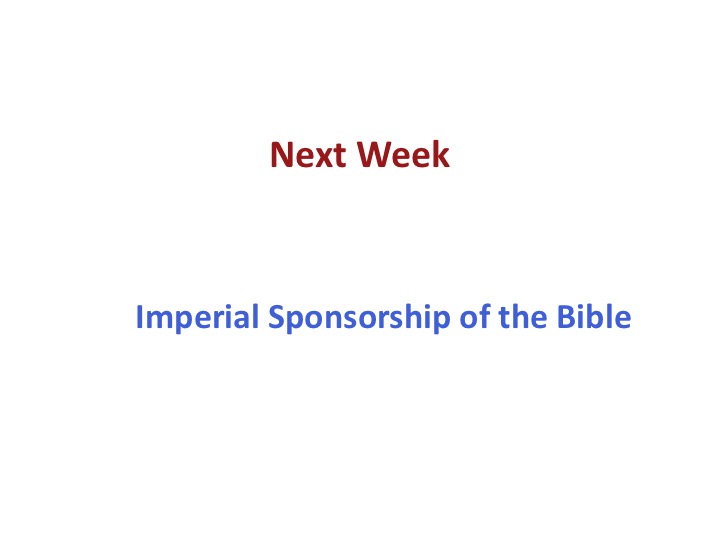 Imperial Sponsorship of the Bible

We have already talked about the apparent evidence that there was no complete book called the Bible until the fourth century simply because the highly persecuted early Christian church did not have the wherewithal to produce such an expensive item. That was about to change. We will learn next week about the 50 bibles of Constantine.