Apocrypha and the Intertestamental Period - Lesson I 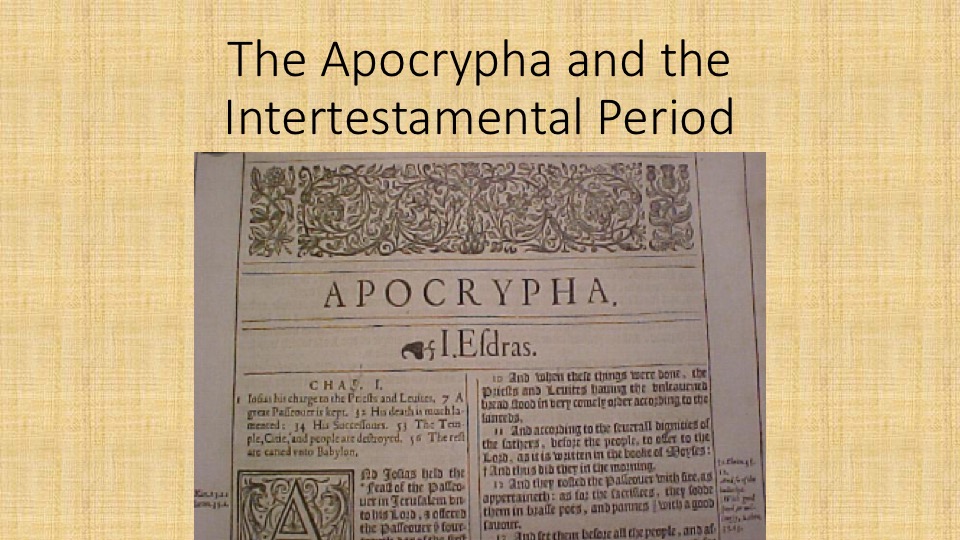 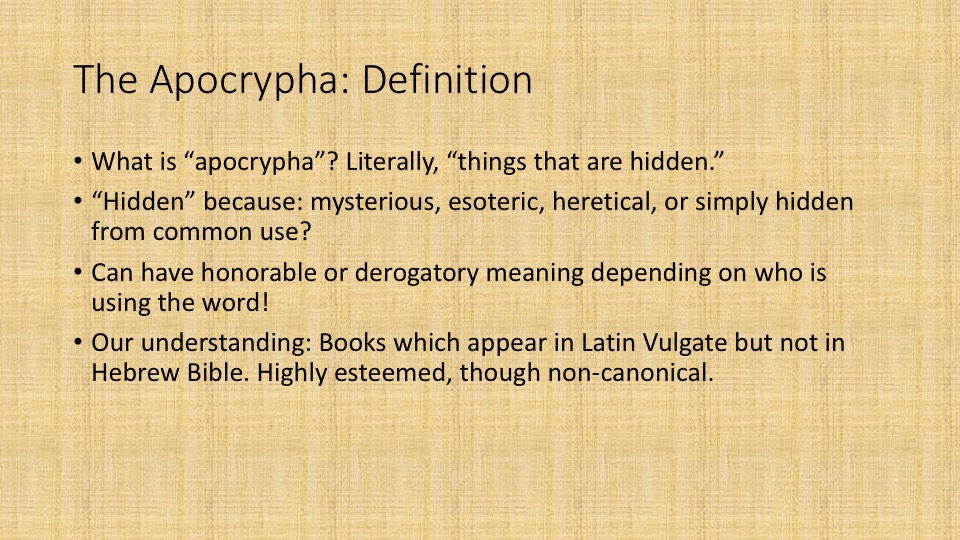 •What is “apocrypha”? Literally, “things that are hidden.”

•“Hidden” because: mysterious, esoteric, heretical, or simply hidden from common use?

•Can have honorable or derogatory meaning depending on who is using the word!

•Our understanding: Books which appear in Latin Vulgate but not in Hebrew Bible. Highly esteemed, though non-canonical. 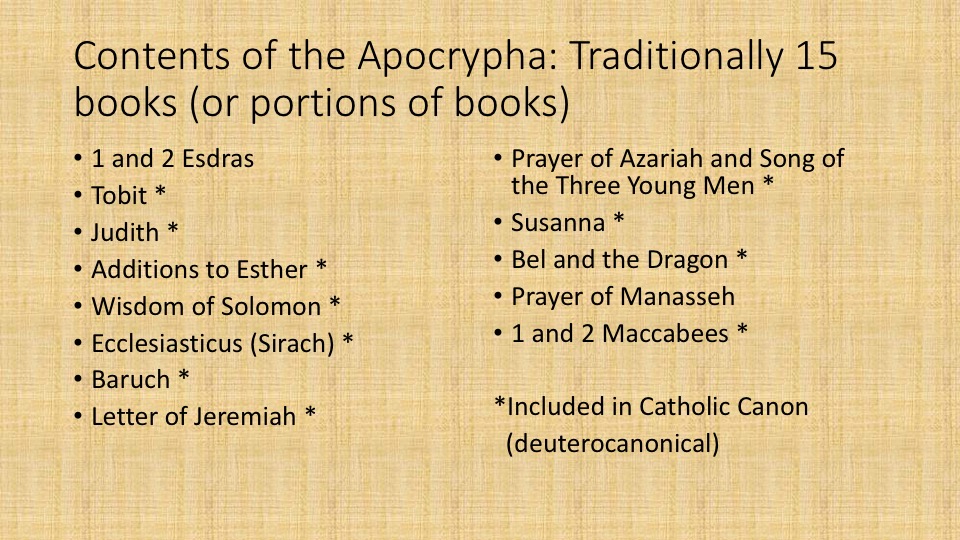 Contents of the Apocrypha:

Traditionally 15 books (or portions of books)

•Prayer of Azariah and Song of the Three Young Men *

•Bel and the Dragon * 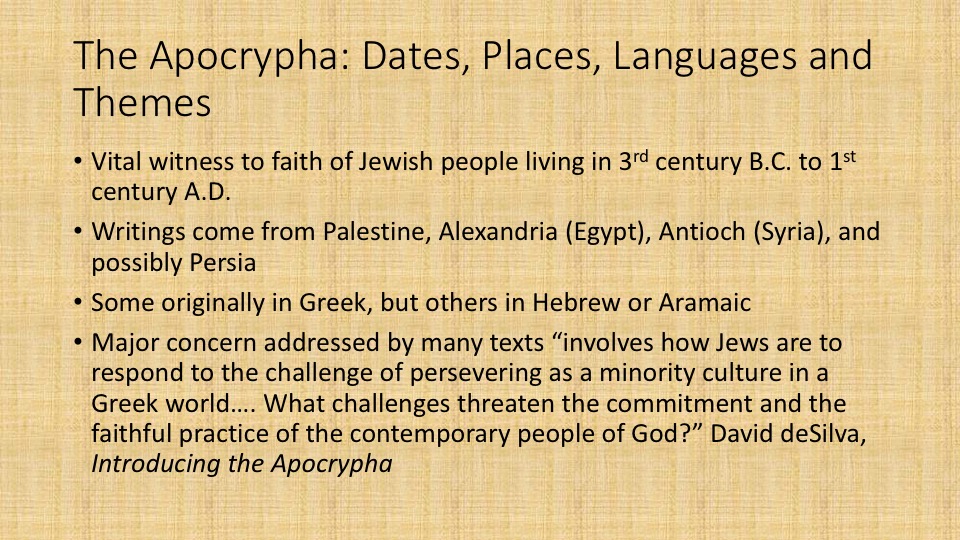 •Some originally in Greek, but others in Hebrew or Aramaic

•Major concern addressed by many texts “involves how Jews are to respond to the challenge of persevering as a minority culture in a Greek world…. What challenges threaten the commitment and the faithful practice of the contemporary people of God?” David deSilva, "Introducing the Apocrypha"

Canonical Status of the Apocrypha

•Not in Hebrew Bible

•Appears in Septuagint (except 2 Esdras), making “Septuagint Plus” (Hebrew Bible of LXX plus additional books from Hellenistic and Roman periods)

•Viewed as belonging to Scriptures throughout medieval period because of inclusion in Vulgate. 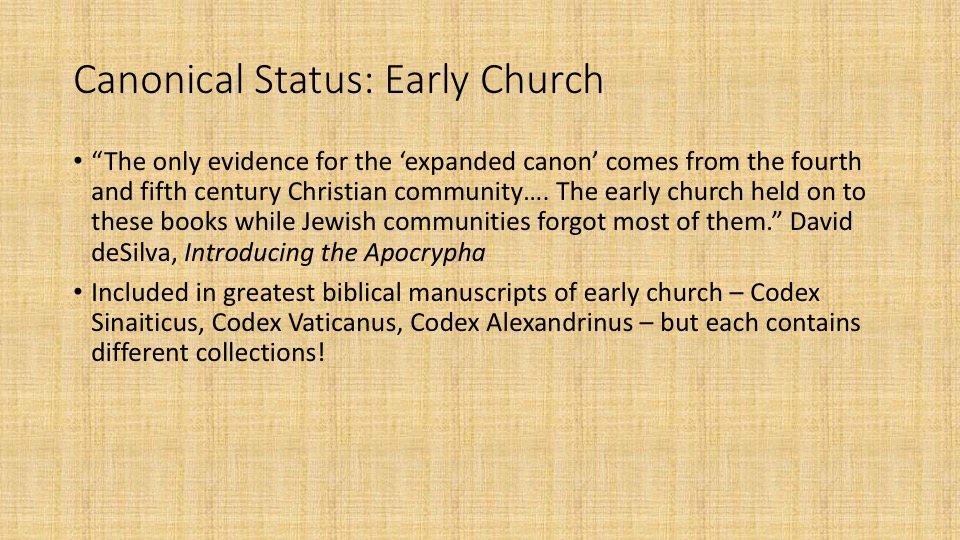 •“The only evidence for the ‘expanded canon’ comes from the fourth and fifth century Christian community…. The early church held on to these books while Jewish communities forgot most of them.” David deSilva, Introducing the Apocrypha 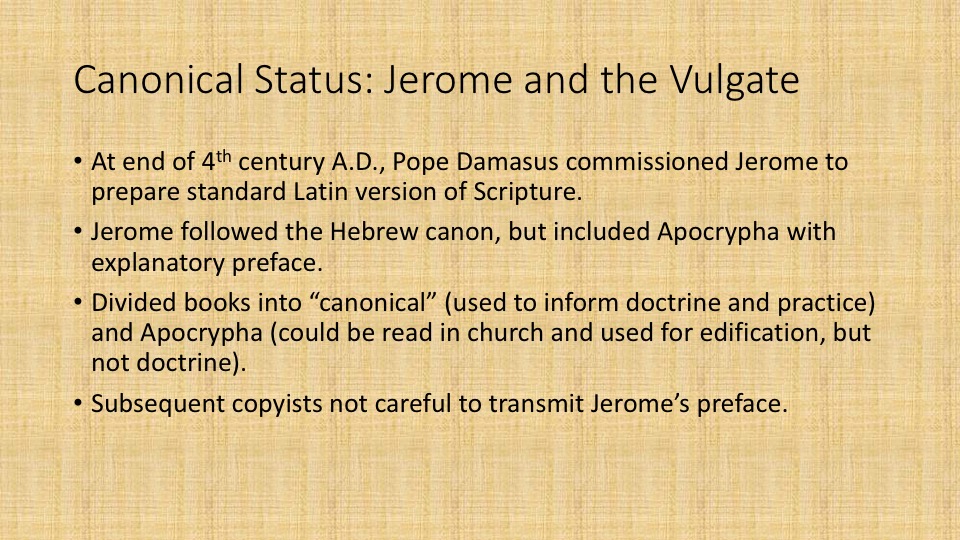 Canonical Status: Jerome and the Vulgate

•Divided books into “canonical” (used to inform doctrine and practice) and Apocrypha (could be read in church and used for edification, but not doctrine). 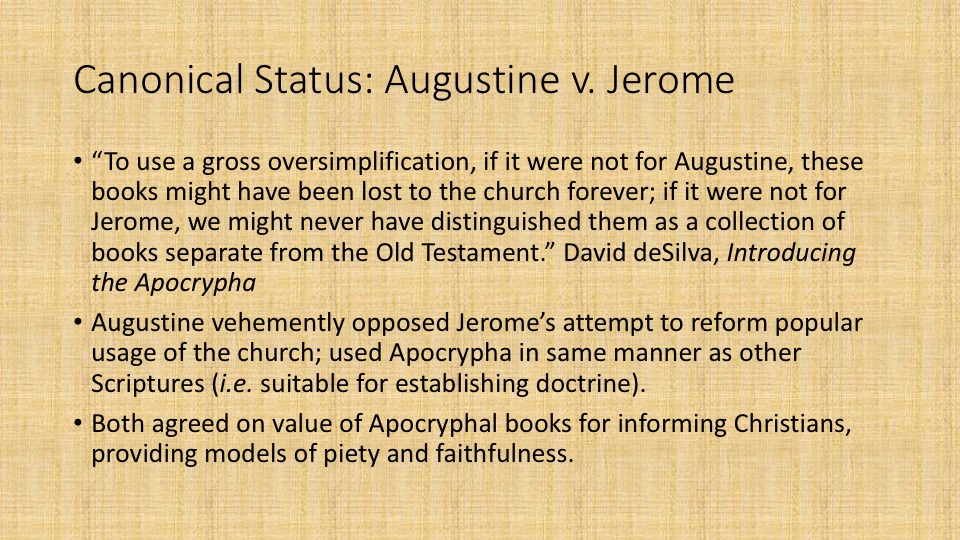 •“To use a gross oversimplification, if it were not for Augustine, these books might have been lost to the church forever; if it were not for Jerome, we might never have distinguished them as a collection of books separate from the Old Testament.” David deSilva, Introducing the Apocrypha

•Both agreed on value of Apocryphal books for informing Christians, providing models of piety and faithfulness.

•Principal of sola scriptura: Scripture alone, not church tradition, is source for all doctrine.

•Luther’s 1534 German translation: Placed Apocrypha between OT and NT, with title “Apocrypha, that is, books which are not held equal to the sacred scriptures, and nevertheless are useful and good to read.”

•Coverdale’s 1535 English translation: “Apocrypha. The books and treatises which among the fathers of old are not reckoned to be of like authority with the other books of the Bible, neither are they found in the Canon of the Hebrew.”

•Calvin’s 1546 Geneva Bible: Apocrypha useful and fruitful for Christians to read, as long as contents are interpreted in line with the canonical scriptures. 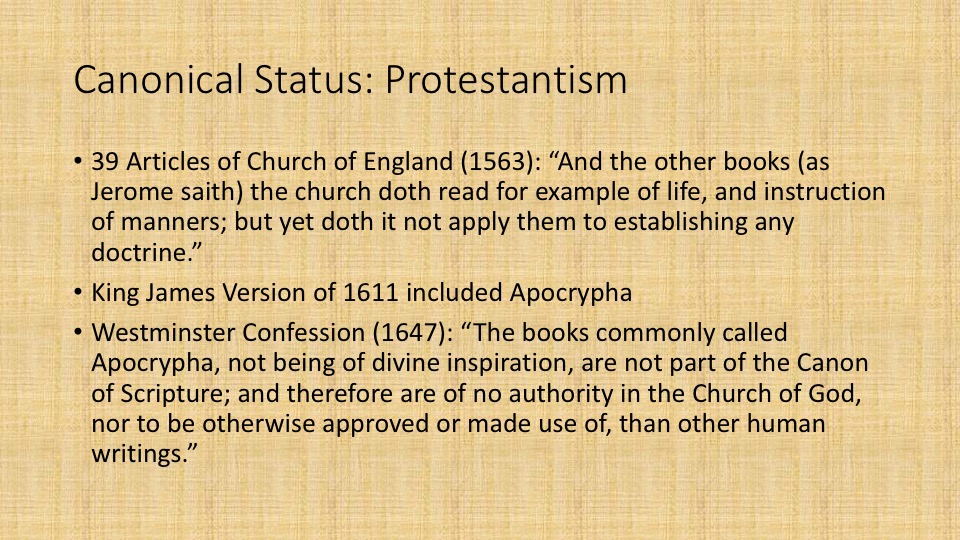 •39 Articles of Church of England (1563): “And the other books (as Jerome saith) the church doth read for example of life, and instruction of manners; but yet doth it not apply them to establishing any doctrine.”

•Westminster Confession (1647): “The books commonly called Apocrypha, not being of divine inspiration, are not part of the Canon of Scripture; and therefore are of no authority in the Church of God, nor to be otherwise approved or made use of, than other human writings.” 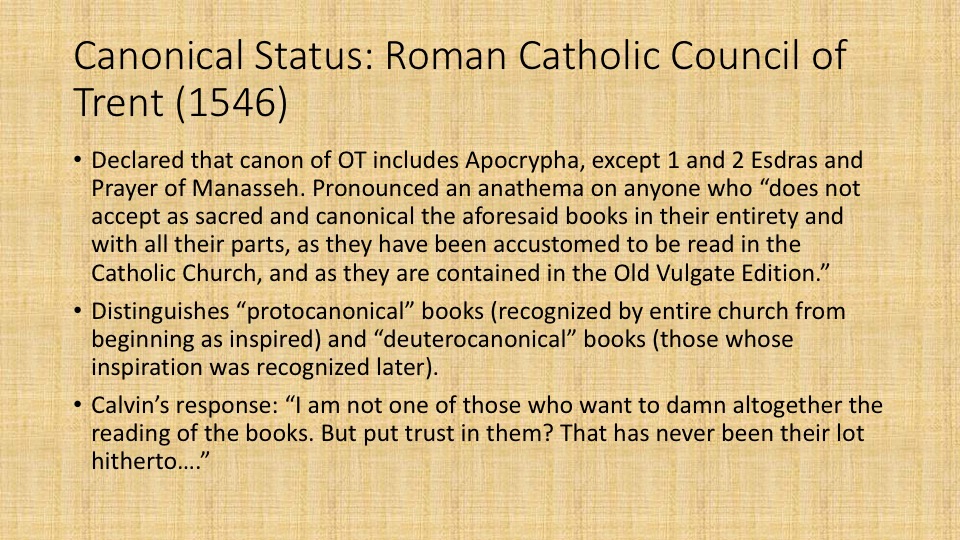 •Declared that canon of OT includes Apocrypha, except 1 and 2 Esdras and Prayer of Manasseh. Pronounced an anathema on anyone who “does not accept as sacred and canonical the aforesaid books in their entirety and with all their parts, as they have been accustomed to be read in the Catholic Church, and as they are contained in the Old Vulgate Edition.”

•Calvin’s response: “I am not one of those who want to damn altogether the reading of the books. But put trust in them? That has never been their lot hitherto….” 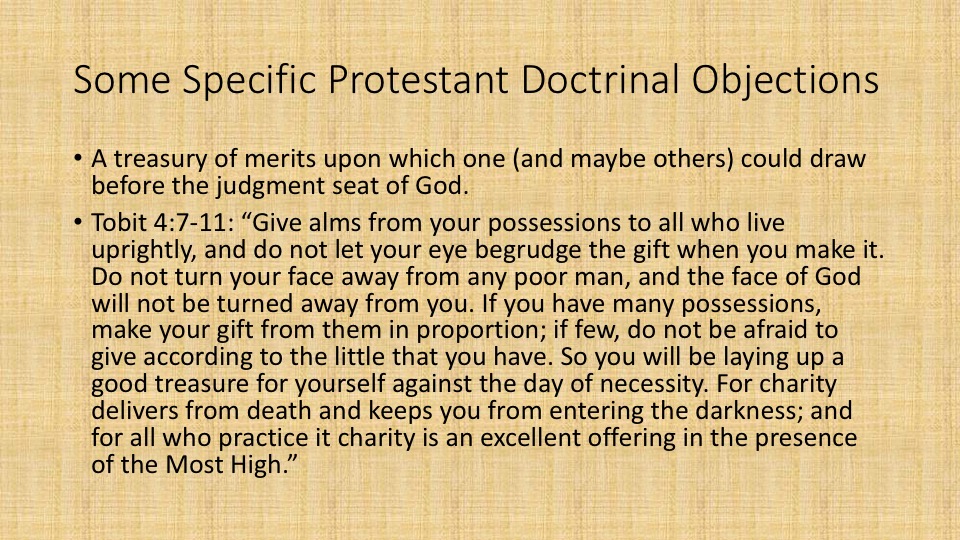 •A treasury of merits upon which one (and maybe others) could draw before the judgment seat of God.

•Tobit 4:7-11: “Give alms from your possessions to all who live uprightly, and do not let your eye begrudge the gift when you make it. Do not turn your face away from any poor man, and the face of God will not be turned away from you. If you have many possessions, make your gift from them in proportion; if few, do not be afraid to give according to the little that you have. So you will be laying up a good treasure for yourself against the day of necessity. For charity delivers from death and keeps you from entering the darkness; and for all who practice it charity is an excellent offering in the presence of the Most High.” 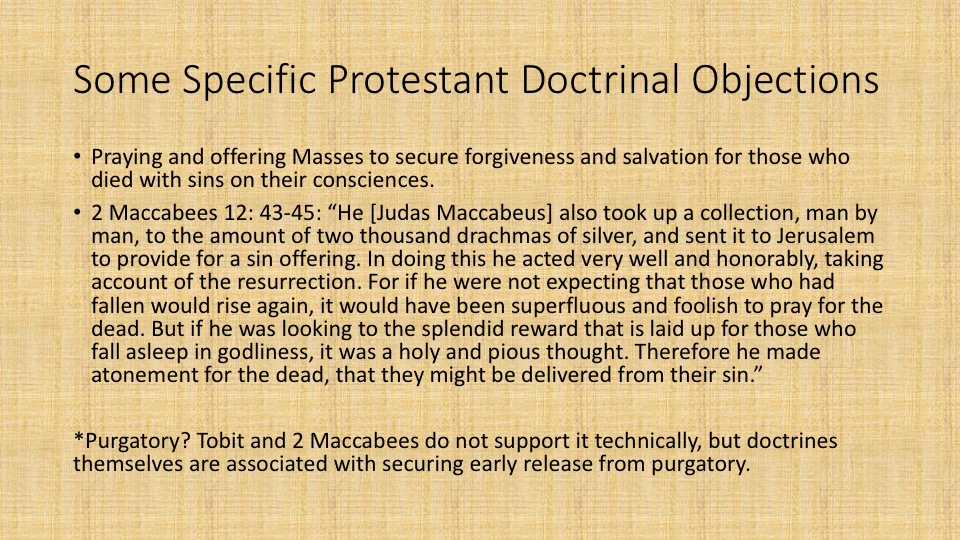 •Praying and offering Masses to secure forgiveness and salvation for those who died with sins on their consciences.

•2 Maccabees 12: 43-45: “He [Judas Maccabeus] also took up a collection, man by man, to the amount of two thousand drachmas of silver, and sent it to Jerusalem to provide for a sin offering. In doing this he acted very well and honorably, taking account of the resurrection. For if he were not expecting that those who had fallen would rise again, it would have been superfluous and foolish to pray for the dead. But if he was looking to the splendid reward that is laid up for those who fall asleep in godliness, it was a holy and pious thought. Therefore he made atonement for the dead, that they might be delivered from their sin.”

*Purgatory? Tobit and 2 Maccabees do not support it technically, but doctrines themselves are associated with securing early release from purgatory. 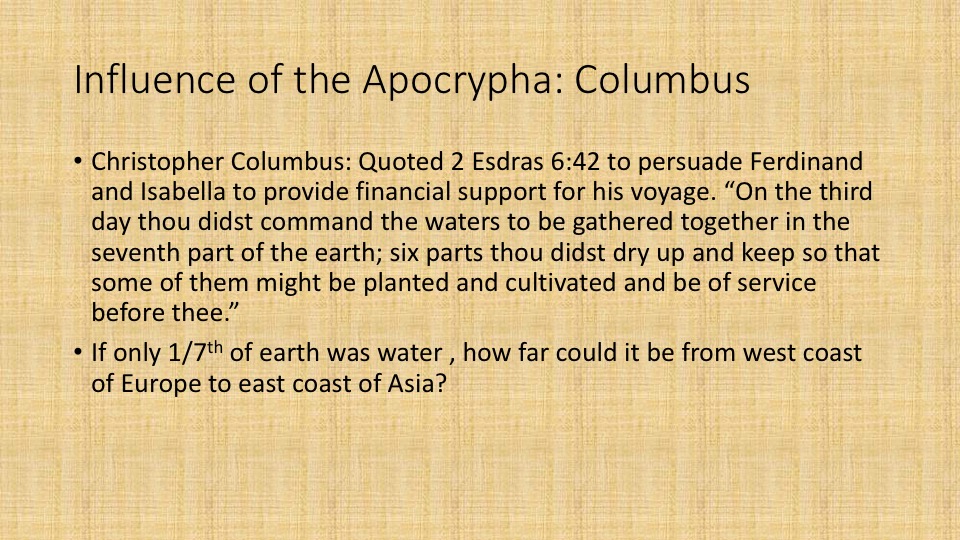 •Influence of the Apocrypha: Columbus

•Christopher Columbus: Quoted 2 Esdras 6:42 to persuade Ferdinand and Isabella to provide financial support for his voyage. “On the third day thou didst command the waters to be gathered together in the seventh part of the earth; six parts thou didst dry up and keep so that some of them might be planted and cultivated and be of service before thee.”

•If only 1/7th of earth was water , how far could it be from west coast of Europe to east coast of Asia? 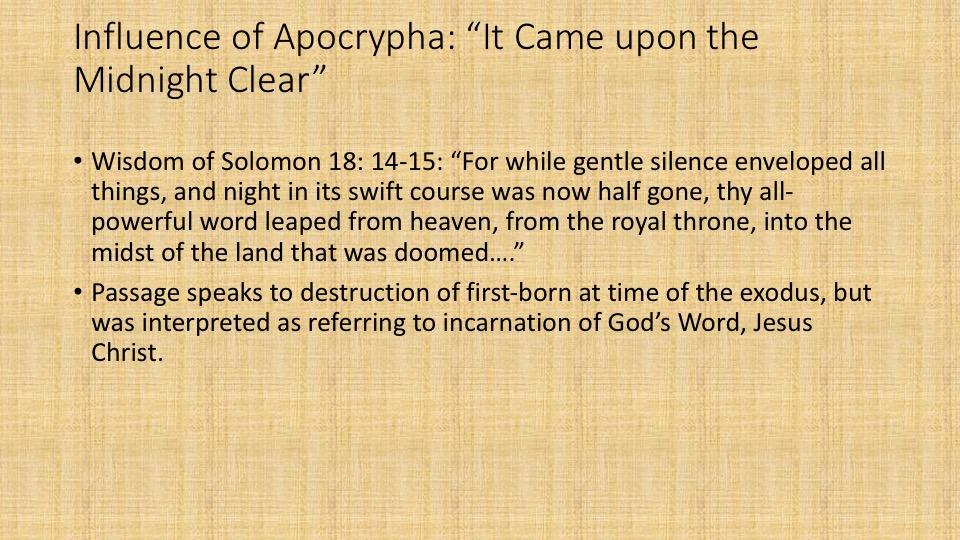 •Influence of Apocrypha: “It Came upon the Midnight Clear”

•Wisdom of Solomon 18: 14-15: “For while gentle silence enveloped all things, and night in its swift course was now half gone, thy all- powerful word leaped from heaven, from the royal throne, into the midst of the land that was doomed….”

•Passage speaks to destruction of first-born at time of the exodus, but was interpreted as referring to incarnation of God’s Word, Jesus Christ. 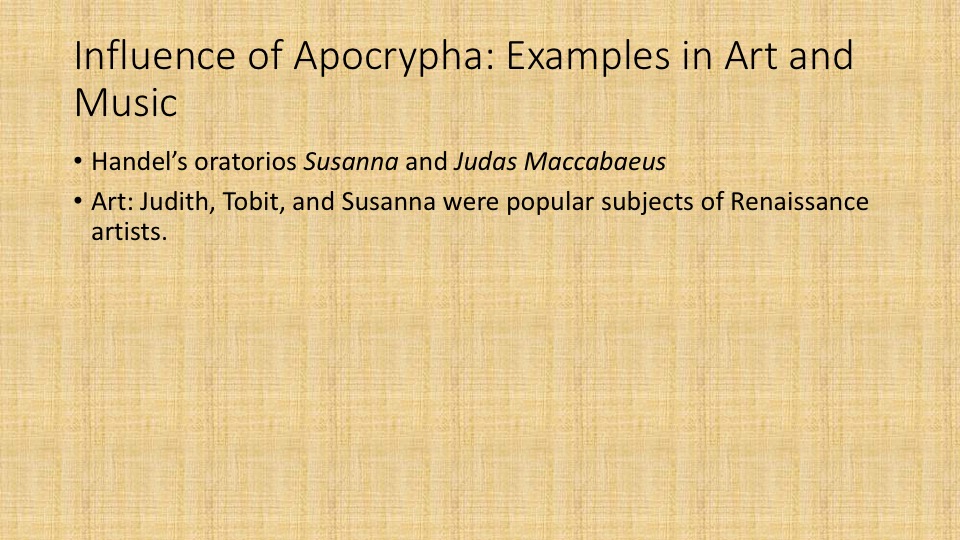 •Influence of Apocrypha: Examples in Art and Music 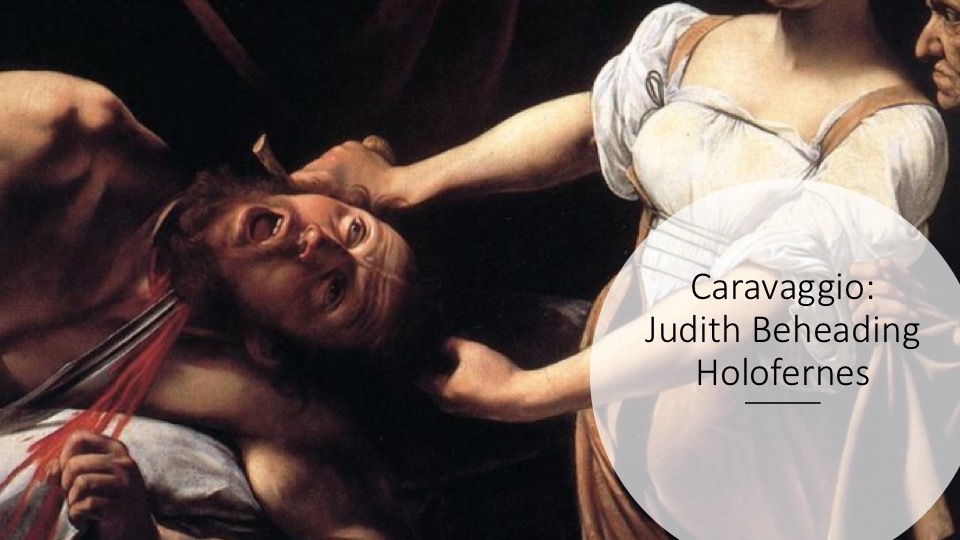 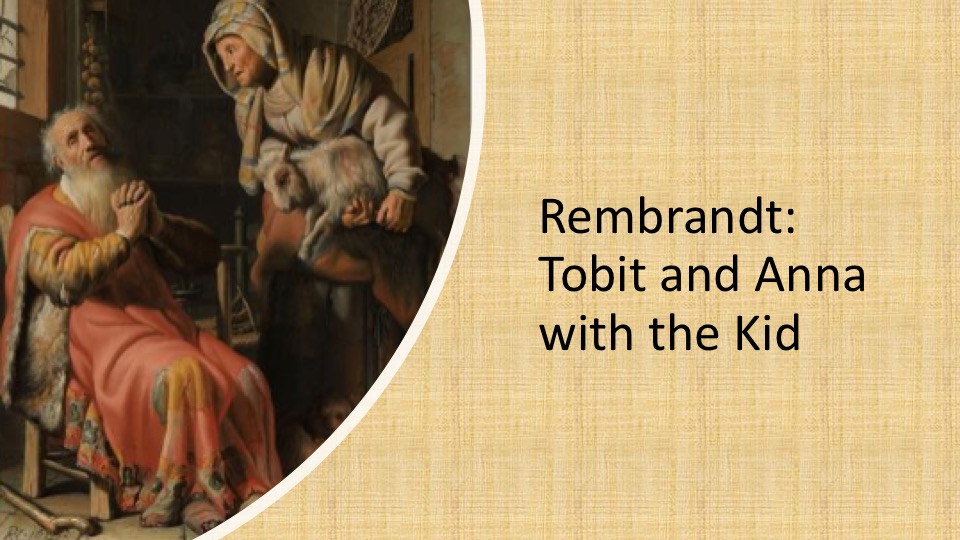 Tobit and Anna with the Kid 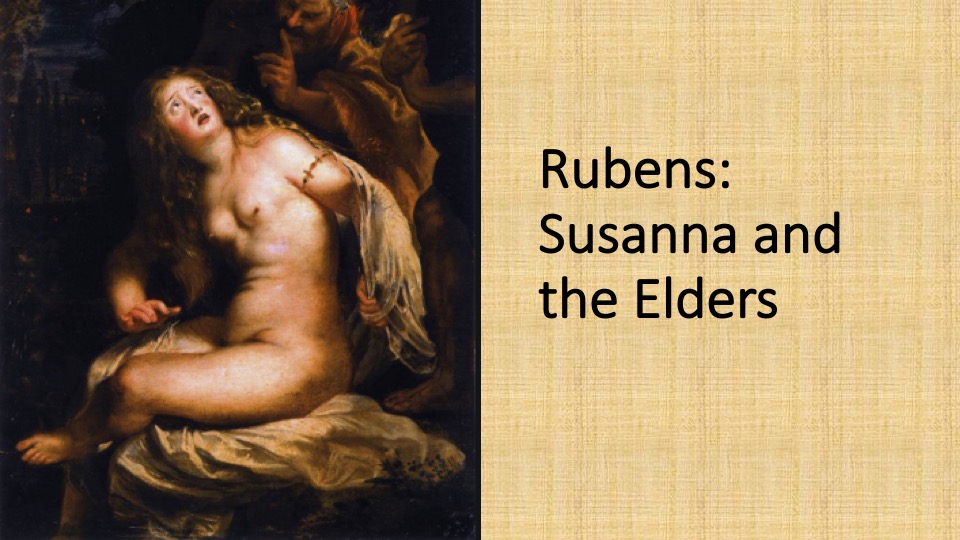 Rubens: Susanna and the Elders 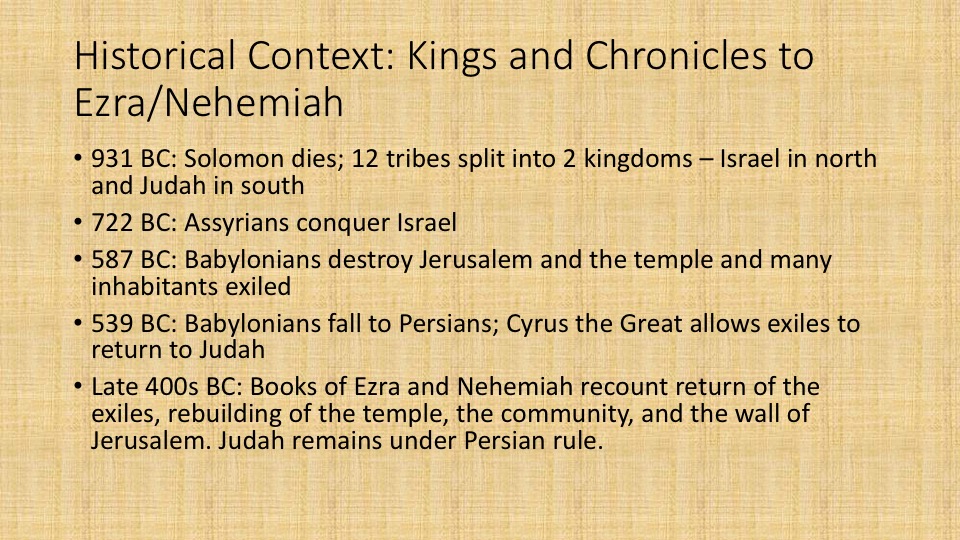 •931 BC: Solomon dies; 12 tribes split into 2 kingdoms – Israel in north and Judah in south

•587 BC: Babylonians destroy Jerusalem and the temple and many inhabitants exiled

•539 BC: Babylonians fall to Persians; Cyrus the Great allows exiles to return to Judah

•Late 400s BC: Books of Ezra and Nehemiah recount return of the exiles, rebuilding of the temple, the community, and the wall of Jerusalem. Judah remains under Persian rule. 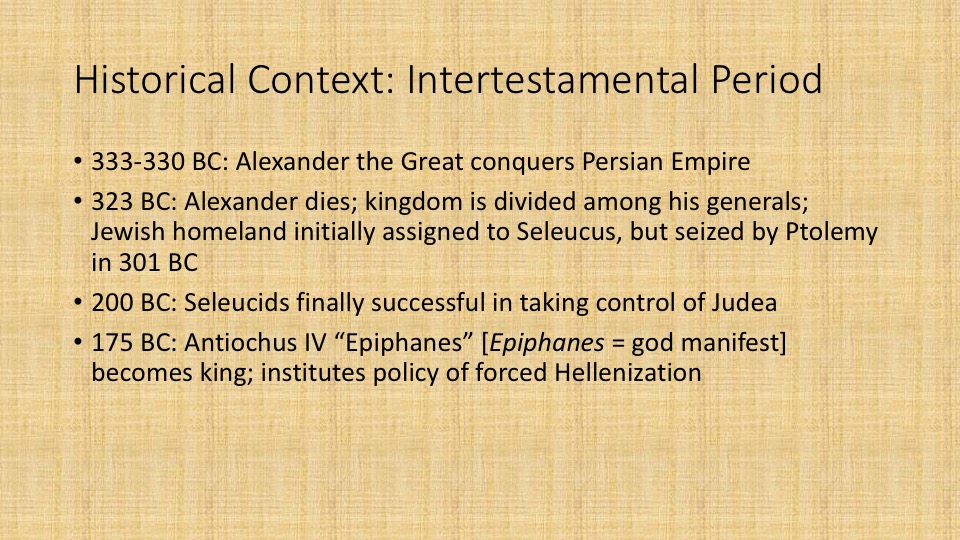 •323 BC: Alexander dies; kingdom is divided among his generals; Jewish homeland initially assigned to Seleucus, but seized by Ptolemy in 301 BC

•200 BC: Seleucids finally successful in taking control of Judea

And Antiochus IV began a scorched earth attempt to eliminate Judaism from Judea.

In Lesson II we will transition to the response to Antiochus IV which was the Maccabean revolt.

Apocrypha and the Intertestamental Period - Lesson I