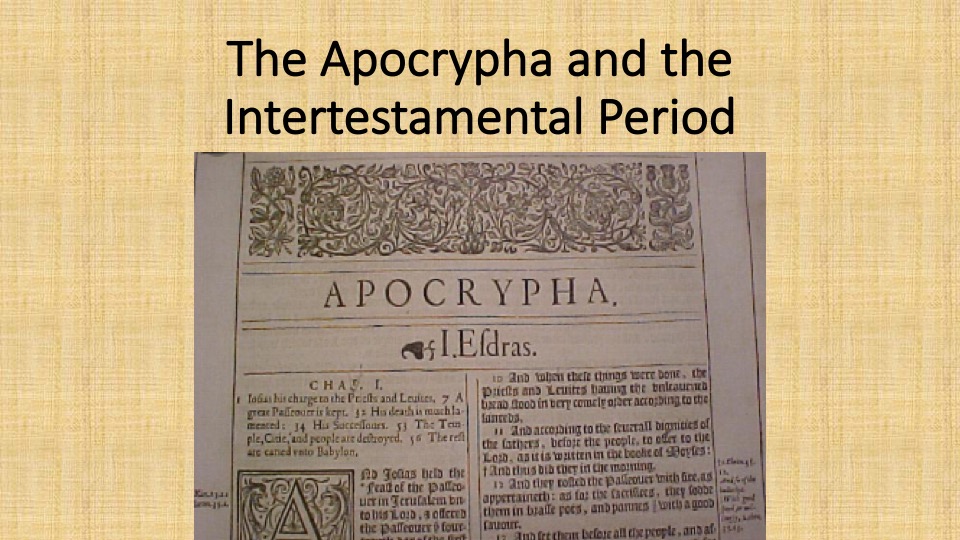 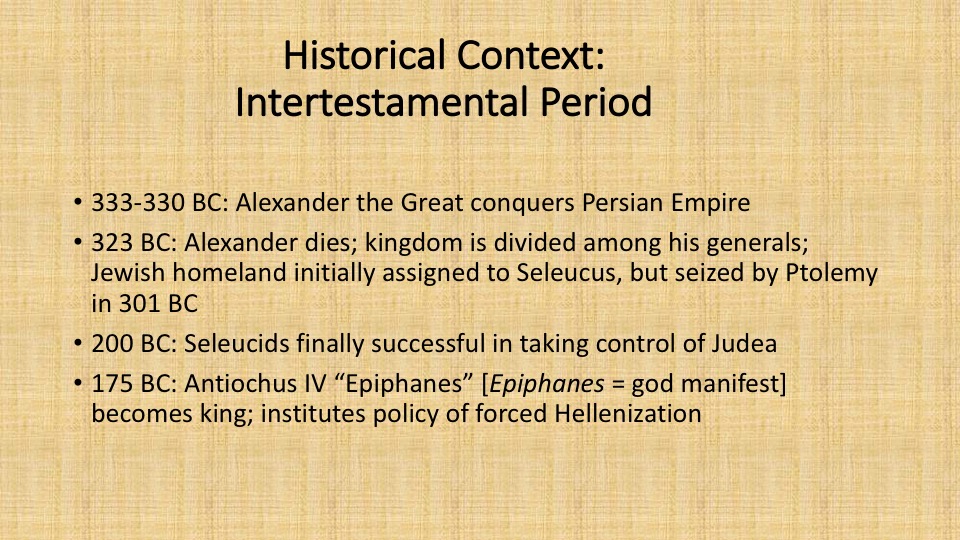 323 BC: Alexander dies; kingdom is divided among his generals; Jewish homeland initially assigned to Seleucus, but seized by Ptolemy in 301 BC

200 BC: Seleucids finally successful in taking control of Judea 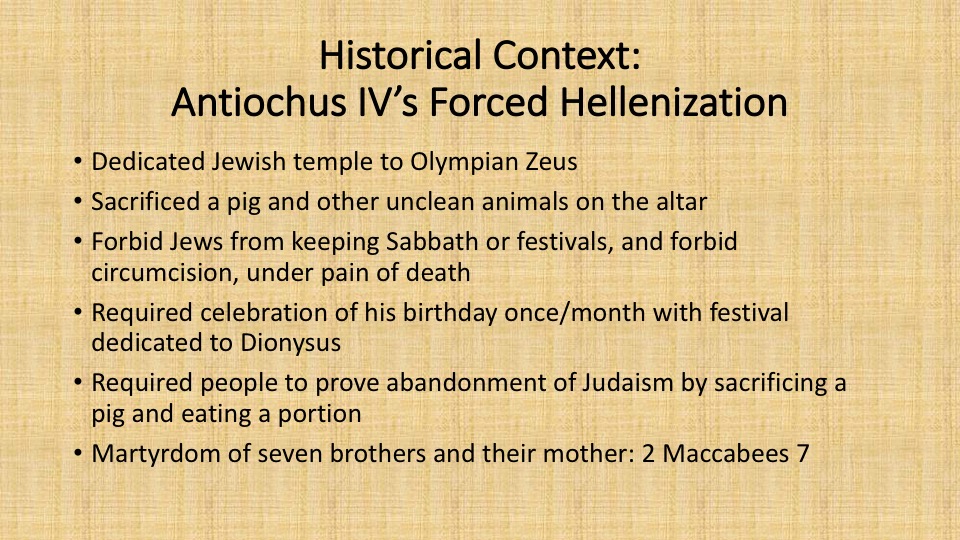 Sacrificed a pig and other unclean animals on the altar

Forbid Jews from keeping Sabbath or festivals, and forbid circumcision, under pain of death

Martyrdom of seven brothers and their mother: 2 Maccabees 7 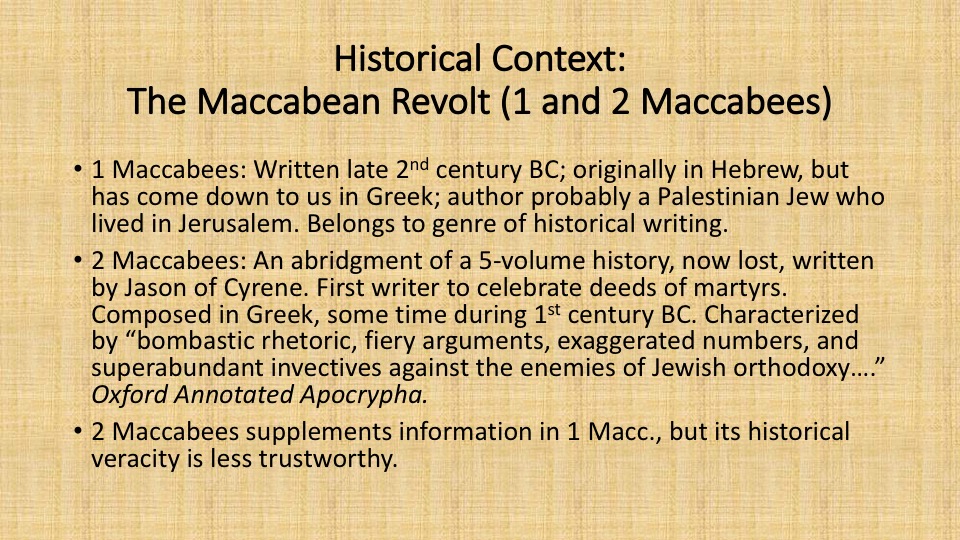 1 Maccabees: Written late 2nd century BC; originally in Hebrew, but has come down to us in Greek; author probably a Palestinian Jew who lived in Jerusalem. Belongs to genre of historical writing.

2 Maccabees: An abridgment of a 5-volume history, now lost, written by Jason of Cyrene. First writer to celebrate deeds of martyrs. Composed in Greek, some time during 1st century BC. Characterized by “bombastic rhetoric, fiery arguments, exaggerated numbers, and superabundant invectives against the enemies of Jewish orthodoxy….” Oxford Annotated Apocrypha.

2 Maccabees supplements information in 1 Macc., but its historical veracity is less trustworthy. 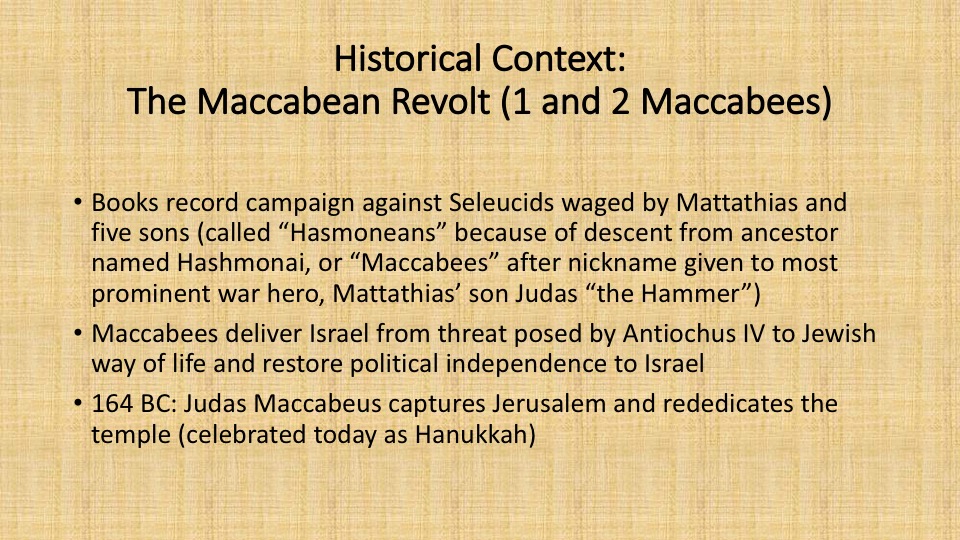 Books record campaign against Seleucids waged by Mattathias and five sons (called “Hasmoneans” because of descent from ancestor named Hashmonai, or “Maccabees” after nickname given to most prominent war hero, Mattathias’ son Judas “the Hammer”)

164 BC: Judas Maccabeus captures Jerusalem and rededicates the temple (celebrated today as Hanukkah) 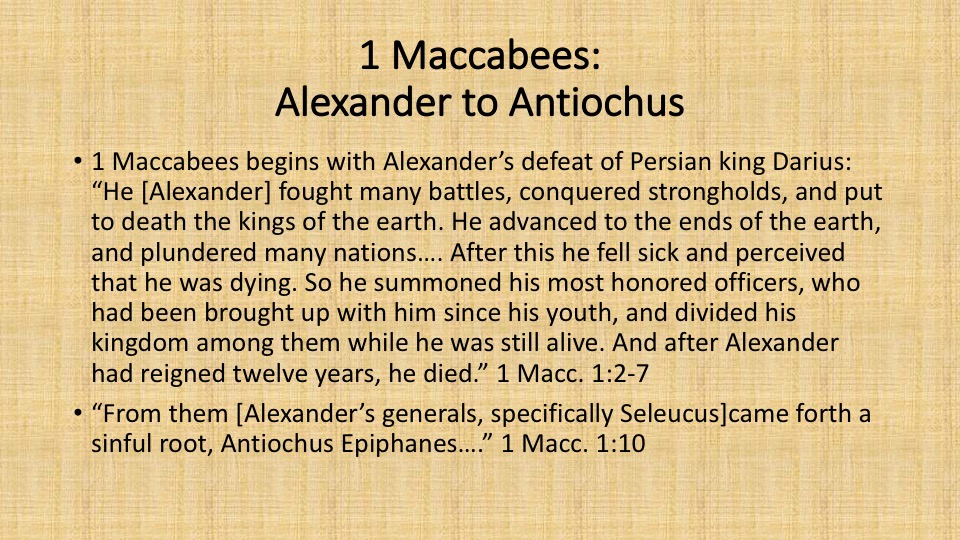 1 Maccabees begins with Alexander’s defeat of Persian king Darius: “He [Alexander] fought many battles, conquered strongholds, and put to death the kings of the earth. He advanced to the ends of the earth, and plundered many nations…. After this he fell sick and perceived that he was dying. So he summoned his most honored officers, who had been brought up with him since his youth, and divided his kingdom among them while he was still alive. And after Alexander had reigned twelve years, he died.” 1 Macc. 1:2-7

“From them [Alexander’s generals, specifically Seleucus]came forth a sinful root, Antiochus Epiphanes….” 1 Macc. 1:10 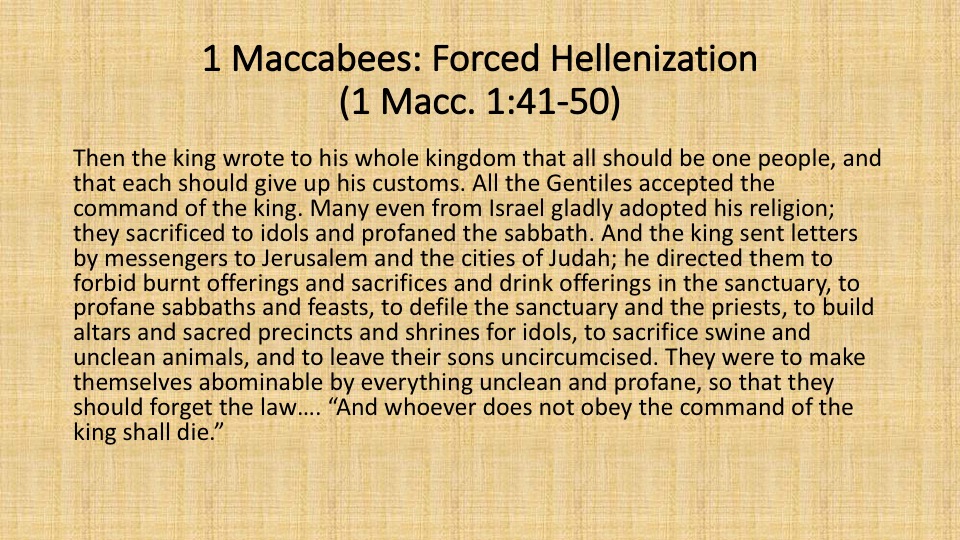 Then the king wrote to his whole kingdom that all should be one people, and that each should give up his customs. All the Gentiles accepted the command of the king. Many even from Israel gladly adopted his religion; they sacrificed to idols and profaned the sabbath. And the king sent letters by messengers to Jerusalem and the cities of Judah; he directed them to forbid burnt offerings and sacrifices and drink offerings in the sanctuary, to profane sabbaths and feasts, to defile the sanctuary and the priests, to build altars and sacred precincts and shrines for idols, to sacrifice swine and unclean animals, and to leave their sons uncircumcised. They were to make themselves abominable by everything unclean and profane, so that they should forget the law…. “And whoever does not obey the command of the king shall die.” 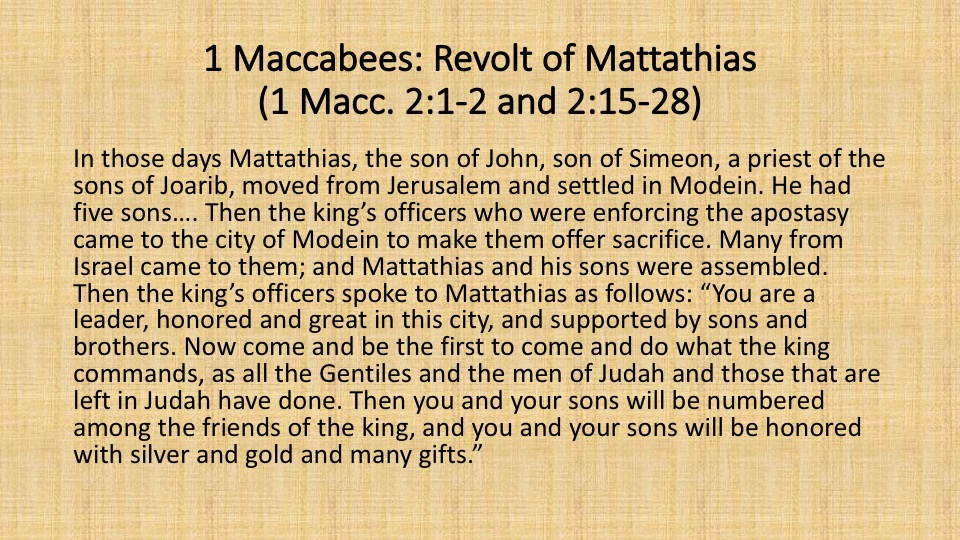 In those days Mattathias, the son of John, son of Simeon, a priest of the sons of Joarib, moved from Jerusalem and settled in Modein. He had five sons…. Then the king’s officers who were enforcing the apostasy came to the city of Modein to make them offer sacrifice. Many from Israel came to them; and Mattathias and his sons were assembled. Then the king’s officers spoke to Mattathias as follows: “You are a leader, honored and great in this city, and supported by sons and brothers. Now come and be the first to come and do what the king commands, as all the Gentiles and the men of Judah and those that are left in Judah have done. Then you and your sons will be numbered among the friends of the king, and you and your sons will be honored with silver and gold and many gifts.” 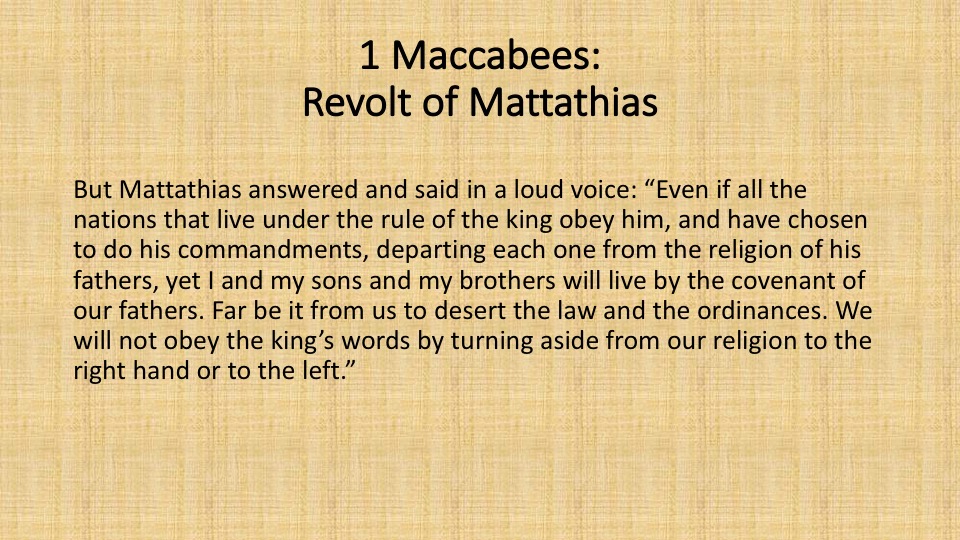 But Mattathias answered and said in a loud voice: “Even if all the nations that live under the rule of the king obey him, and have chosen to do his commandments, departing each one from the religion of his fathers, yet I and my sons and my brothers will live by the covenant of our fathers. Far be it from us to desert the law and the ordinances. We will not obey the king’s words by turning aside from our religion to the right hand or to the left.” 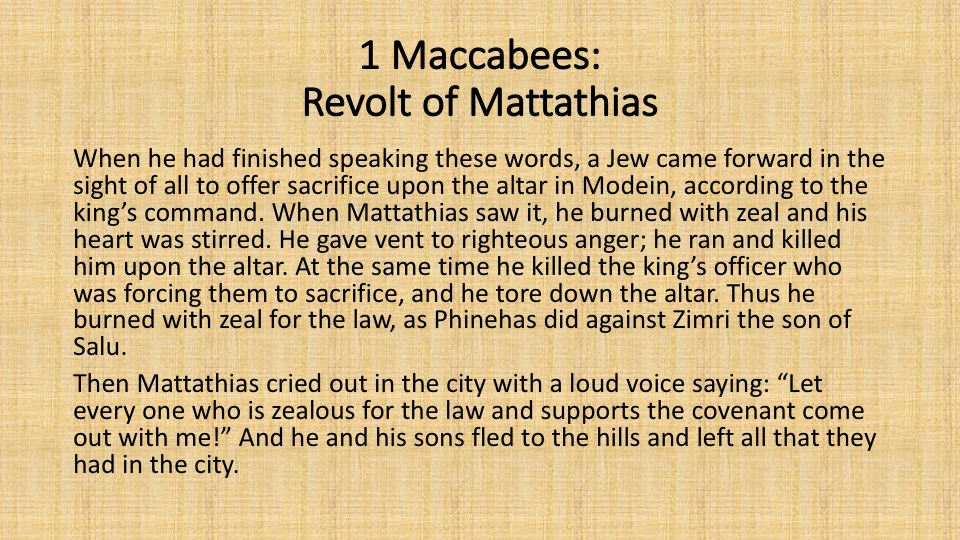 When he had finished speaking these words, a Jew came forward in the sight of all to offer sacrifice upon the altar in Modein, according to the king’s command. When Mattathias saw it, he burned with zeal and his heart was stirred. He gave vent to righteous anger; he ran and killed him upon the altar. At the same time he killed the king’s officer who was forcing them to sacrifice, and he tore down the altar. Thus he burned with zeal for the law, as Phinehas did against Zimri the son of Salu.

Then Mattathias cried out in the city with a loud voice saying: “Let every one who is zealous for the law and supports the covenant come out with me!” And he and his sons fled to the hills and left all that they had in the city. 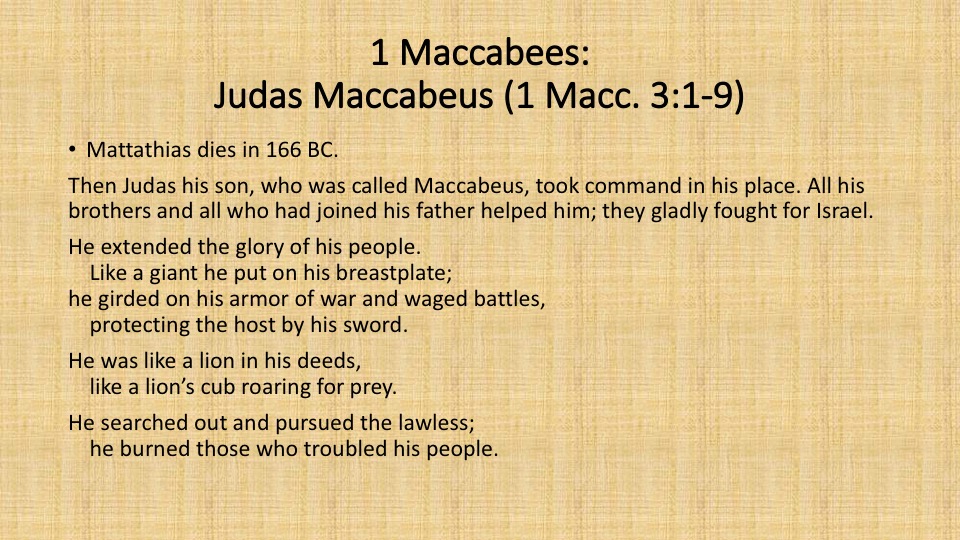 Then Judas his son, who was called Maccabeus, took command in his place. All his brothers and all who had joined his father helped him; they gladly fought for Israel.

He extended the glory of his people.
Like a giant he put on his breastplate;
he girded on his armor of war and waged battles,
protecting the host by his sword.

He searched out and pursued the lawless;
he burned those who troubled his people. 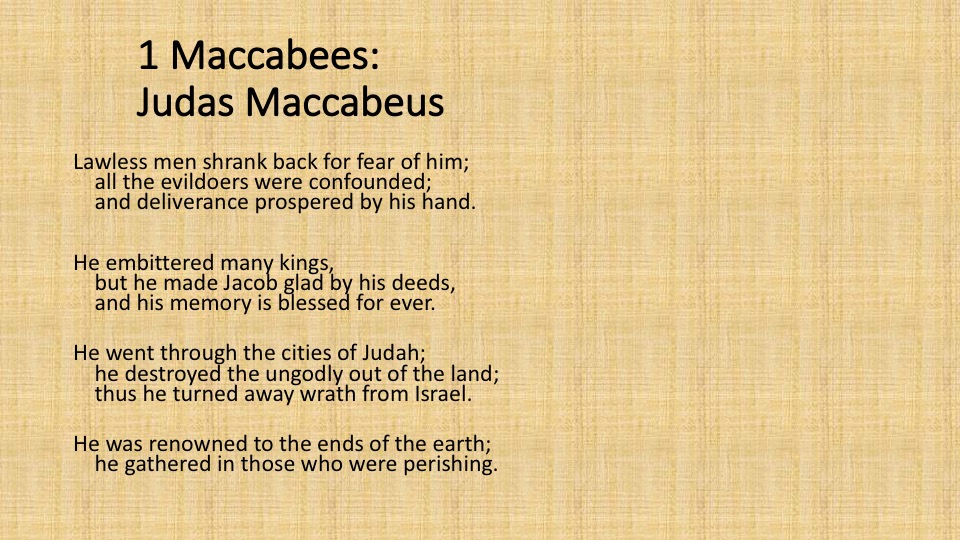 Lawless men shrank back for fear of him;
all the evildoers were confounded;
and deliverance prospered by his hand.

He embittered many kings,
but he made Jacob glad by his deeds,
and his memory is blessed for ever.

He went through the cities of Judah;
he destroyed the ungodly out of the land;
thus he turned away wrath from Israel.

He was renowned to the ends of the earth;
he gathered in those who were perishing. 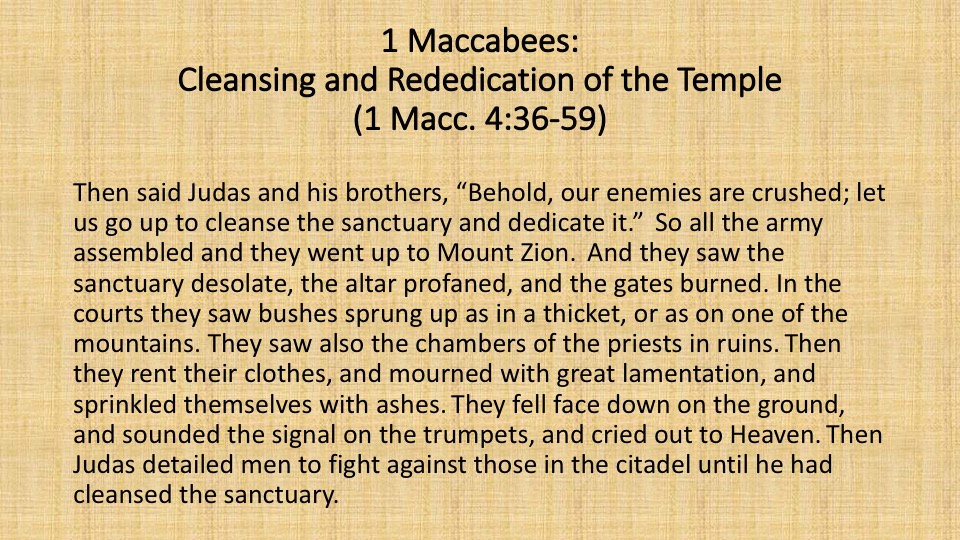 Then said Judas and his brothers, “Behold, our enemies are crushed; let us go up to cleanse the sanctuary and dedicate it.”  So all the army assembled and they went up to Mount Zion.  And they saw the sanctuary desolate, the altar profaned, and the gates burned. In the courts they saw bushes sprung up as in a thicket, or as on one of the mountains. They saw also the chambers of the priests in ruins. Then they rent their clothes, and mourned with great lamentation, and sprinkled themselves with ashes. They fell face down on the ground, and sounded the signal on the trumpets, and cried out to Heaven. Then Judas detailed men to fight against those in the citadel until he had cleansed the sanctuary. 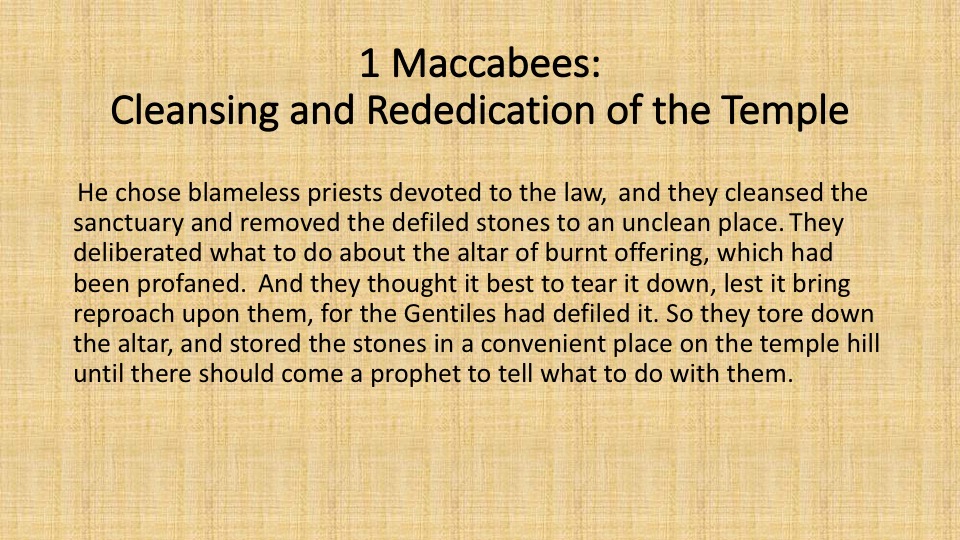 He chose blameless priests devoted to the law,  and they cleansed the sanctuary and removed the defiled stones to an unclean place. They deliberated what to do about the altar of burnt offering, which had been profaned.  And they thought it best to tear it down, lest it bring reproach upon them, for the Gentiles had defiled it. So they tore down the altar, and stored the stones in a convenient place on the temple hill until there should come a prophet to tell what to do with them. 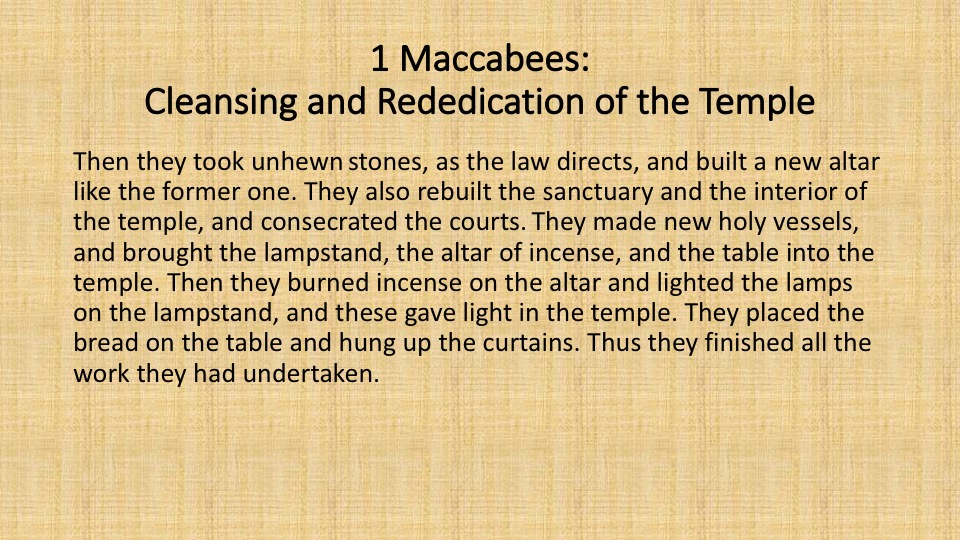 Then they took unhewn stones, as the law directs, and built a new altar like the former one. They also rebuilt the sanctuary and the interior of the temple, and consecrated the courts. They made new holy vessels, and brought the lampstand, the altar of incense, and the table into the temple. Then they burned incense on the altar and lighted the lamps on the lampstand, and these gave light in the temple. They placed the bread on the table and hung up the curtains. Thus they finished all the work they had undertaken. 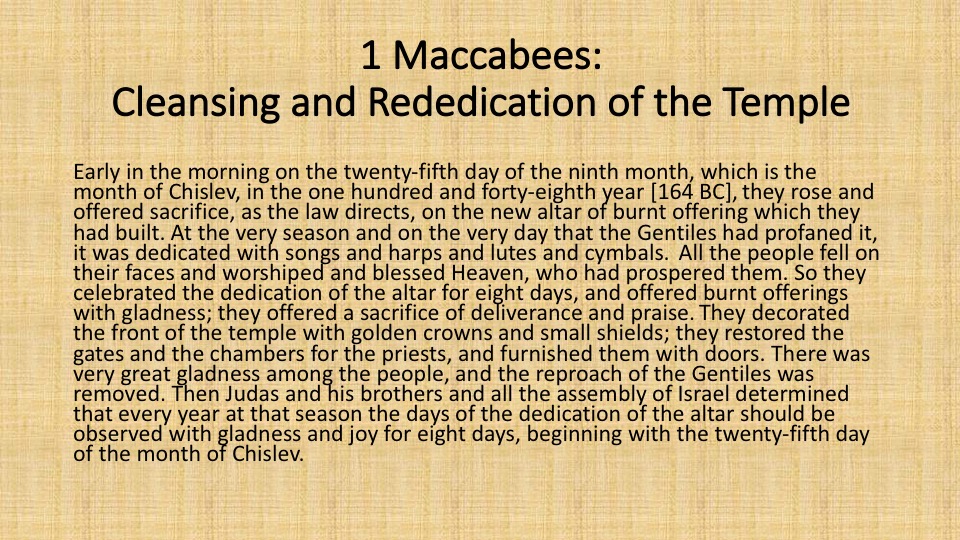 Early in the morning on the twenty-fifth day of the ninth month, which is the month of Chislev, in the one hundred and forty-eighth year [164 BC], they rose and offered sacrifice, as the law directs, on the new altar of burnt offering which they had built. At the very season and on the very day that the Gentiles had profaned it, it was dedicated with songs and harps and lutes and cymbals.  All the people fell on their faces and worshiped and blessed Heaven, who had prospered them. So they celebrated the dedication of the altar for eight days, and offered burnt offerings with gladness; they offered a sacrifice of deliverance and praise. They decorated the front of the temple with golden crowns and small shields; they restored the gates and the chambers for the priests, and furnished them with doors. There was very great gladness among the people, and the reproach of the Gentiles was removed. Then Judas and his brothers and all the assembly of Israel determined that every year at that season the days of the dedication of the altar should be observed with gladness and joy for eight days, beginning with the twenty-fifth day of the month of Chislev. 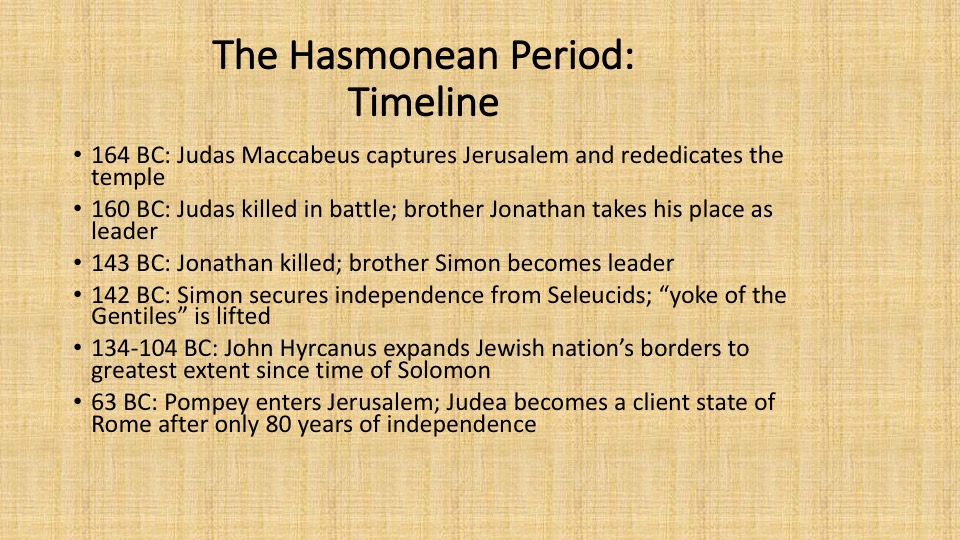 164 BC: Judas Maccabeus captures Jerusalem and rededicates the temple

160 BC: Judas killed in battle; brother Jonathan takes his place as leader

142 BC: Simon secures independence from Seleucids; “yoke of the Gentiles” is lifted

63 BC: Pompey enters Jerusalem; Judea becomes a client state of Rome after only 80 years of independence 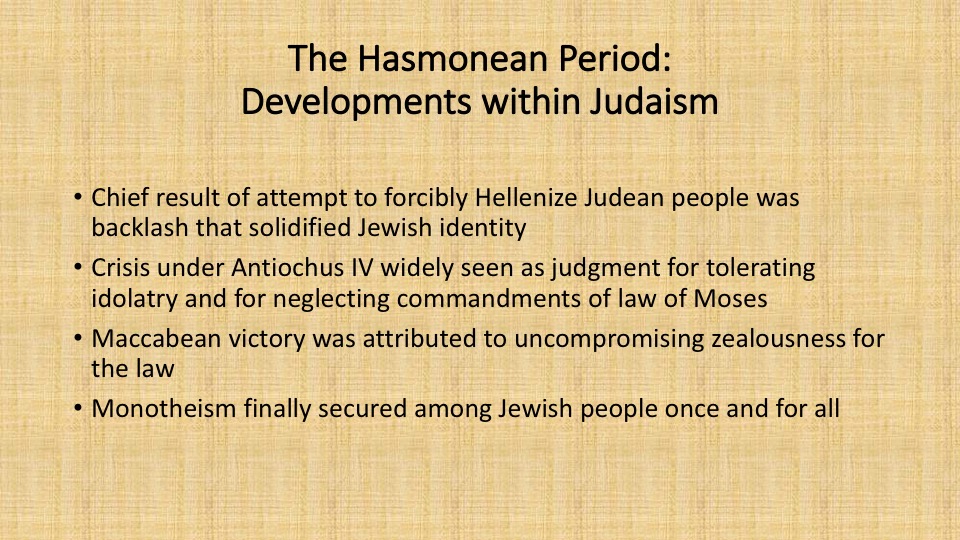 Maccabean victory was attributed to uncompromising zealousness for the law

Monotheism finally secured among Jewish people once and for all 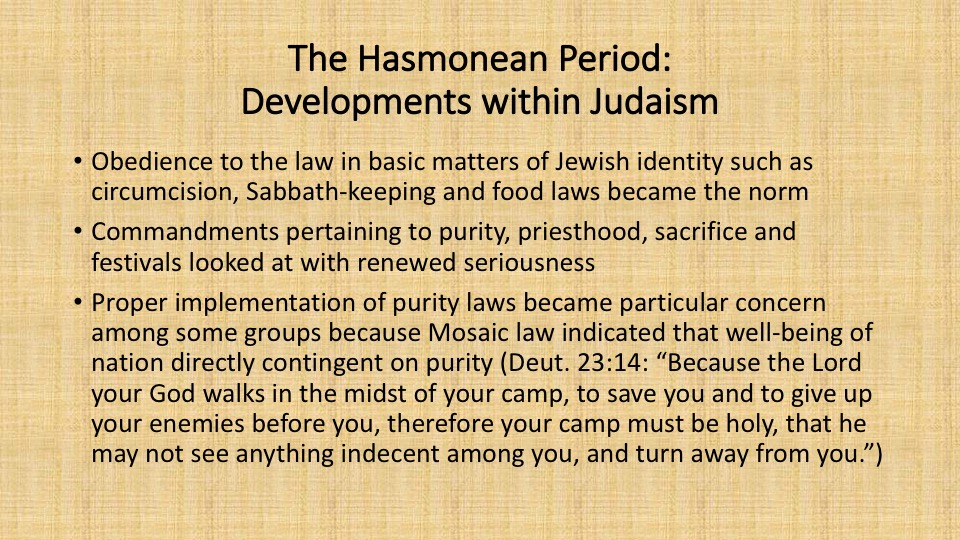 Obedience to the law in basic matters of Jewish identity such as circumcision, Sabbath-keeping and food laws became the norm

Commandments pertaining to purity, priesthood, sacrifice and festivals looked at with renewed seriousness

Proper implementation of purity laws became particular concern among some groups because Mosaic law indicated that well-being of nation directly contingent on purity (Deut. 23:14: “Because the Lord your God walks in the midst of your camp, to save you and to give up your enemies before you, therefore your camp must be holy, that he may not see anything indecent among you, and turn away from you.”) 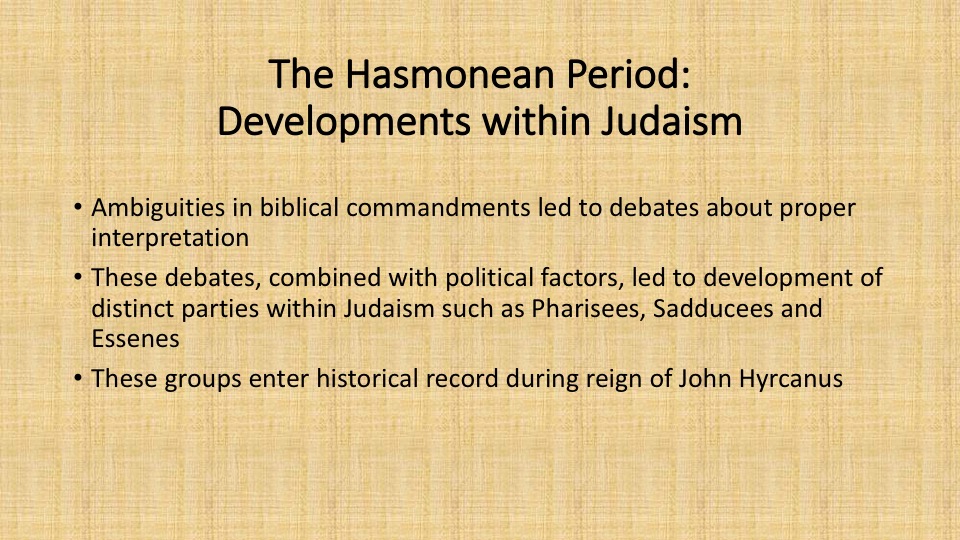 Ambiguities in biblical commandments led to debates about proper interpretation

These debates, combined with political factors, led to development of distinct parties within Judaism such as Pharisees, Sadducees and Essenes

These groups enter historical record during reign of John Hyrcanus 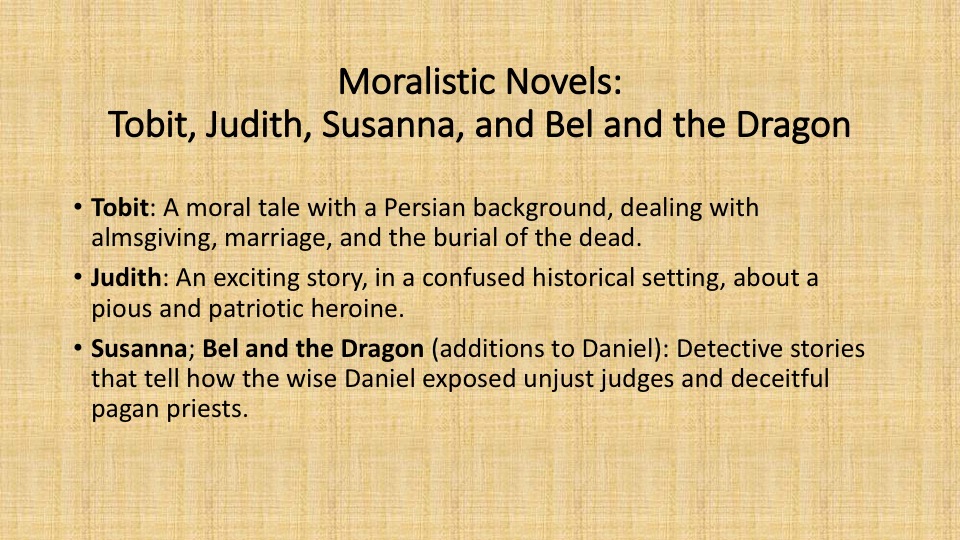 Moralistic Novels:
Tobit, Judith, Susanna, and Bel and the Dragon

Tobit: A moral tale with a Persian background, dealing with almsgiving, marriage, and the burial of the dead.

Judith: An exciting story, in a confused historical setting, about a pious and patriotic heroine.

Susanna; Bel and the Dragon (additions to Daniel): Detective stories that tell how the wise Daniel exposed unjust judges and deceitful pagan priests.

Note: Lessons II and IV of the Apocrypha series will continue on September 8th and 15th, 2019.