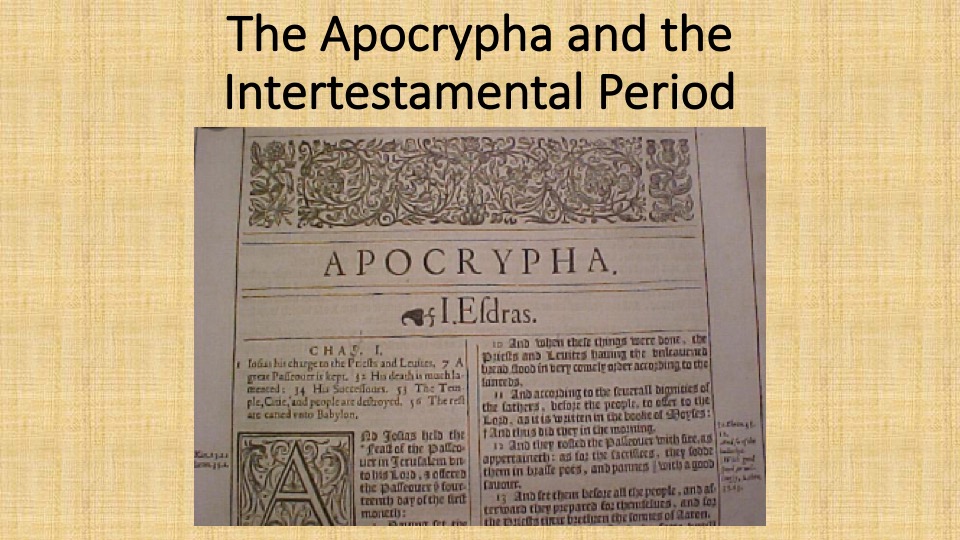 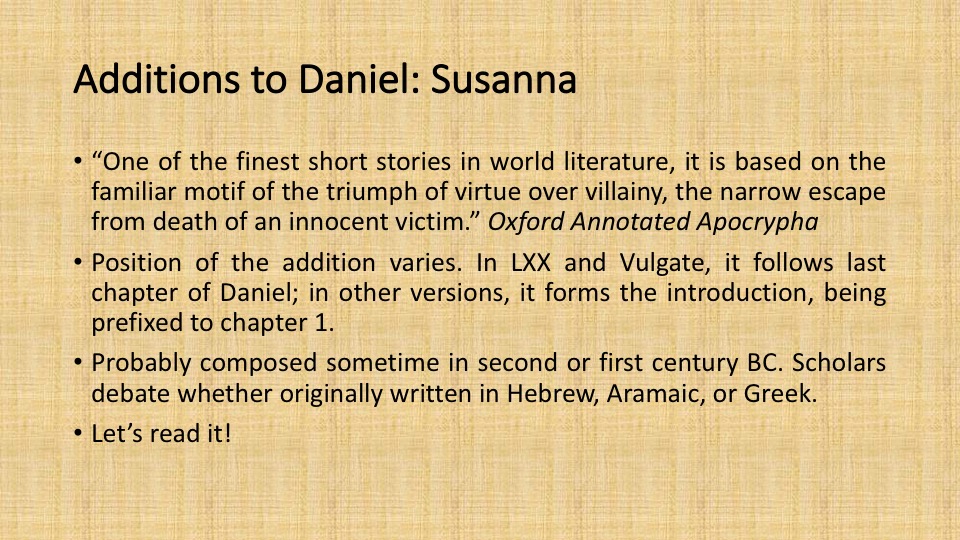 “One of the finest short stories in world literature, it is based on the familiar motif of the triumph of virtue over villainy, the narrow escape from death of an innocent victim.” Oxford Annotated Apocrypha

Position of the addition varies. In LXX and Vulgate, it follows last chapter of Daniel; in other versions, it forms the introduction, being prefixed to chapter 1.

Probably composed sometime in second or first century BC. Scholars debate whether originally written in Hebrew, Aramaic, or Greek. 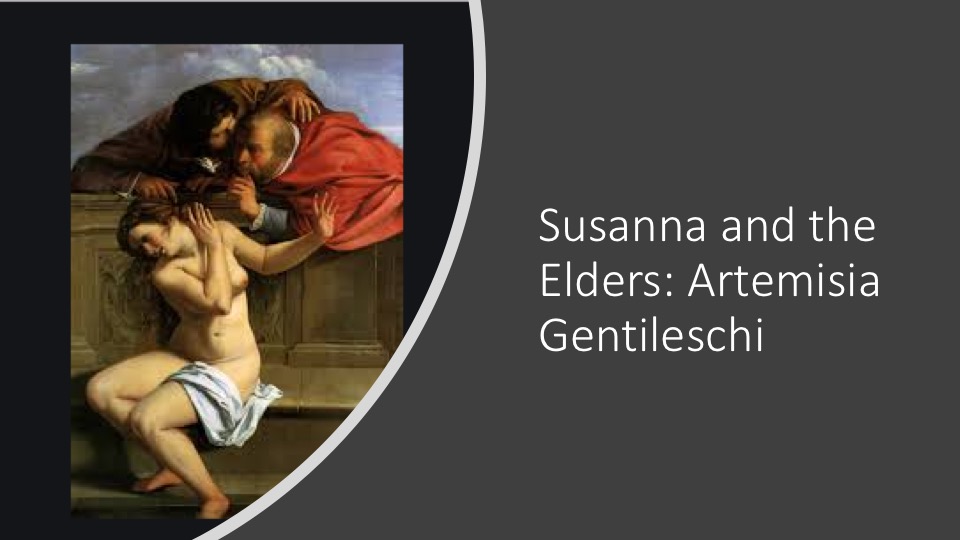 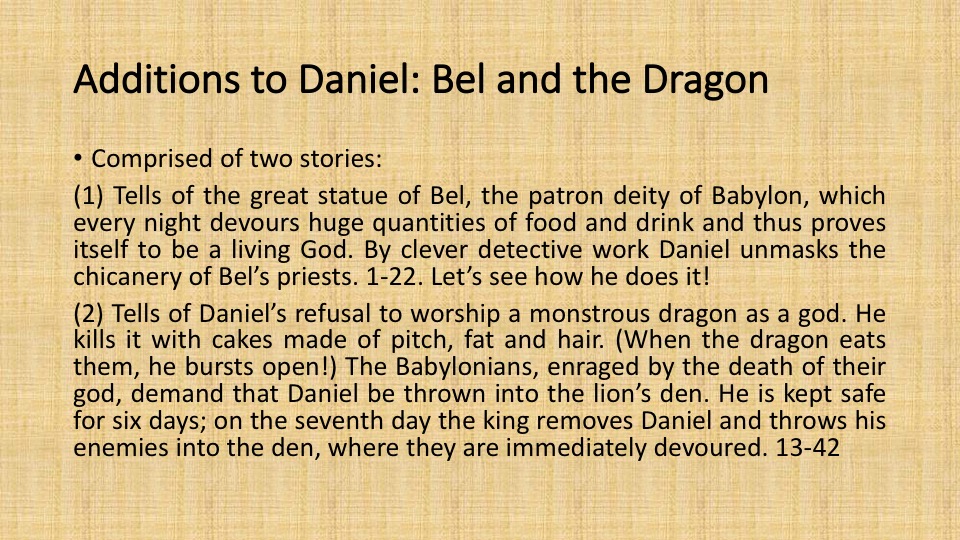 Additions to Daniel: Bel and the Dragon

(1) Tells of the great statue of Bel, the patron deity of Babylon, which every night devours huge quantities of food and drink and thus proves itself to be a living God. By clever detective work Daniel unmasks the chicanery of Bel’s priests. 1-22. Let’s see how he does it!

(2) Tells of Daniel’s refusal to worship a monstrous dragon as a god. He kills it with cakes made of pitch, fat and hair. (When the dragon eats them, he bursts open!) The Babylonians, enraged by the death of their god, demand that Daniel be thrown into the lion’s den. He is kept safe for six days; on the seventh day the king removes Daniel and throws his enemies into the den, where they are immediately devoured. 13-42 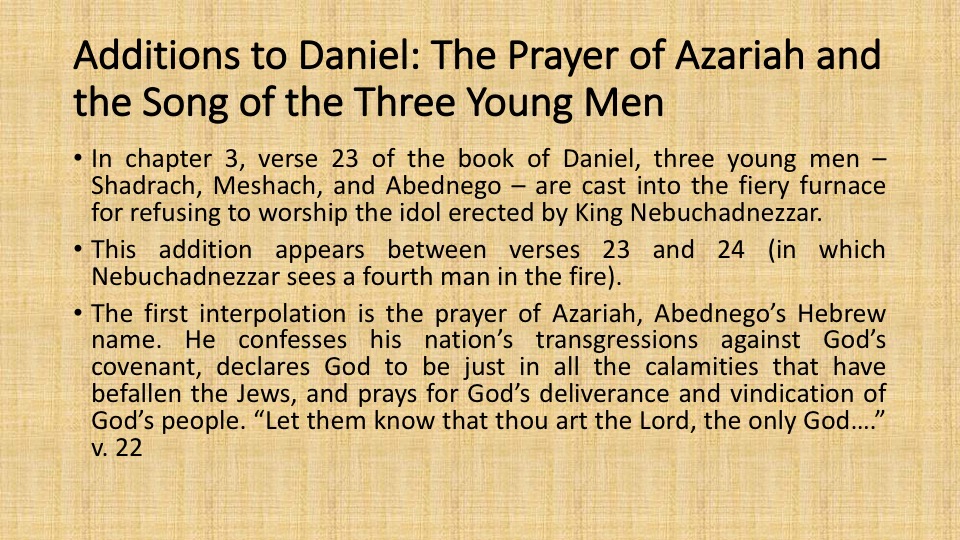 Additions to Daniel: The Prayer of Azariah and the Song of the Three Young Men

In chapter 3, verse 23 of the book of Daniel, three young men – Shadrach, Meshach, and Abednego – are cast into the fiery furnace for refusing to worship the idol erected by King Nebuchadnezzar.

This addition appears between verses 23 and 24 (in which Nebuchadnezzar sees a fourth man in the fire).

The first interpolation is the prayer of Azariah, Abednego’s Hebrew name. He confesses his nation’s transgressions against God’s covenant, declares God to be just in all the calamities that have befallen the Jews, and prays for God’s deliverance and vindication of God’s people. “Let them know that thou art the Lord, the only God….” v. 2 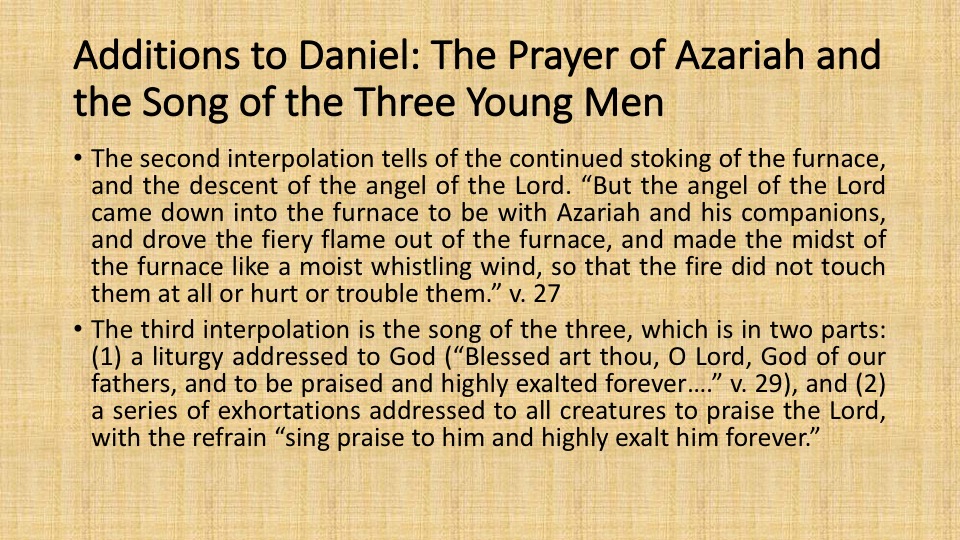 Additions to Daniel: The Prayer of Azariah and the Song of the Three Young Men

The third interpolation is the song of the three, which is in two parts: (1) a liturgy addressed to God (“Blessed art thou, O Lord, God of our fathers, and to be praised and highly exalted forever….” v. 29), and (2) a series of exhortations addressed to all creatures to praise the Lord, with the refrain “sing praise to him and highly exalt him forever.” 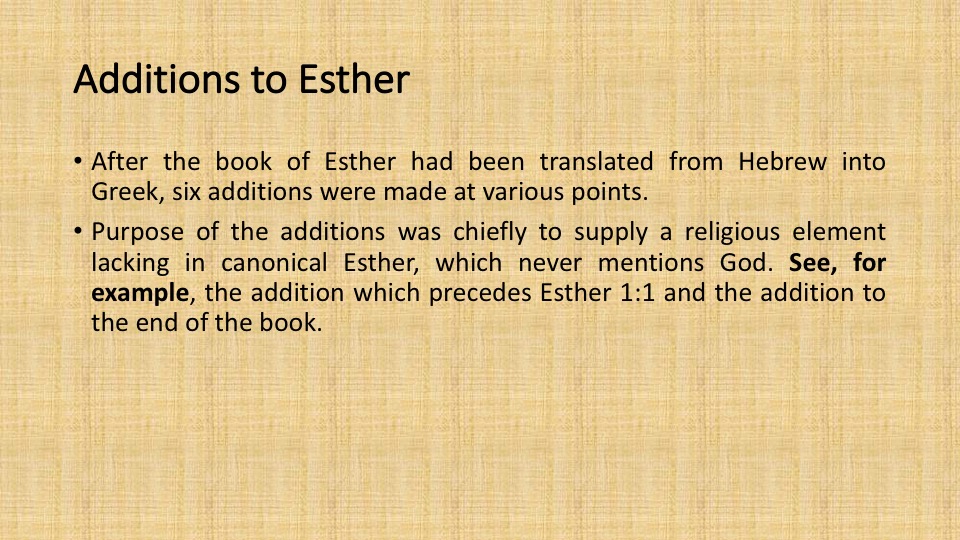 After the book of Esther had been translated from Hebrew into Greek, six additions were made at various points.

Purpose of the additions was chiefly to supply a religious element lacking in canonical Esther, which never mentions God. See, for example, the addition which precedes Esther 1:1 and the addition to the end of the book. 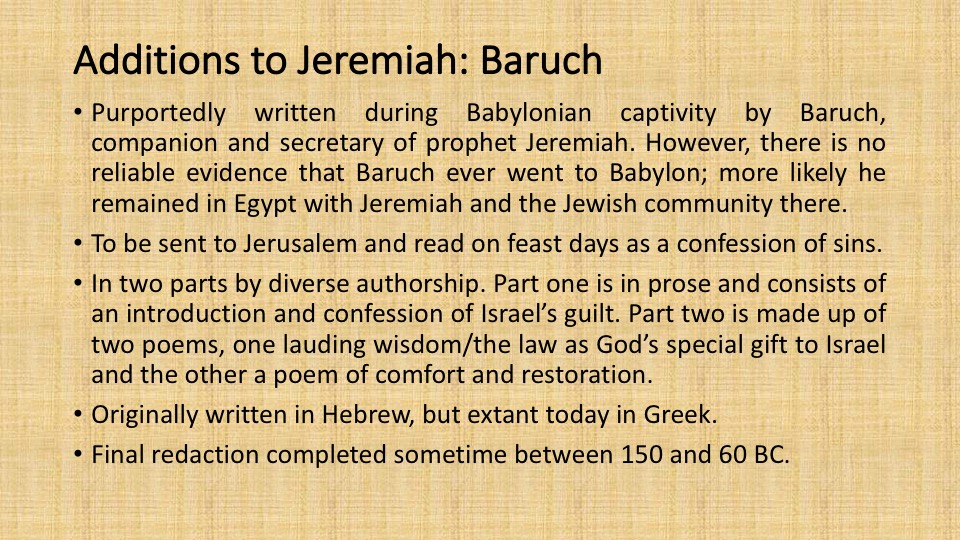 Purportedly written during Babylonian captivity by Baruch, companion and secretary of prophet Jeremiah. However, there is no reliable evidence that Baruch ever went to Babylon; more likely he remained in Egypt with Jeremiah and the Jewish community there.

To be sent to Jerusalem and read on feast days as a confession of sins.

In two parts by diverse authorship. Part one is in prose and consists of an introduction and confession of Israel’s guilt. Part two is made up of two poems, one lauding wisdom/the law as God’s special gift to Israel and the other a poem of comfort and restoration.

Originally written in Hebrew, but extant today in Greek.

Final redaction completed sometime between 150 and 60 BC. 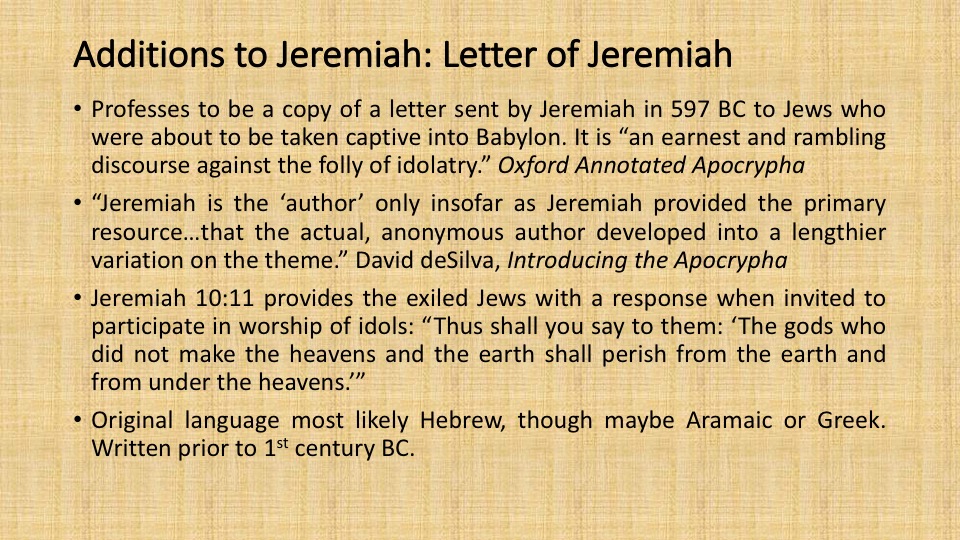 Additions to Jeremiah: Letter of Jeremiah

Professes to be a copy of a letter sent by Jeremiah in 597 BC to Jews who were about to be taken captive into Babylon. It is “an earnest and rambling discourse against the folly of idolatry.” Oxford Annotated Apocrypha

“Jeremiah is the ‘author’ only insofar as Jeremiah provided the primary resource…that the actual, anonymous author developed into a lengthier variation on the theme.” David deSilva, Introducing the Apocrypha

Jeremiah 10:11 provides the exiled Jews with a response when invited to participate in worship of idols: “Thus shall you say to them: ‘The gods who did not make the heavens and the earth shall perish from the earth and from under the heavens.’”

Original language most likely Hebrew, though maybe Aramaic or Greek. Written prior to 1st century BC. 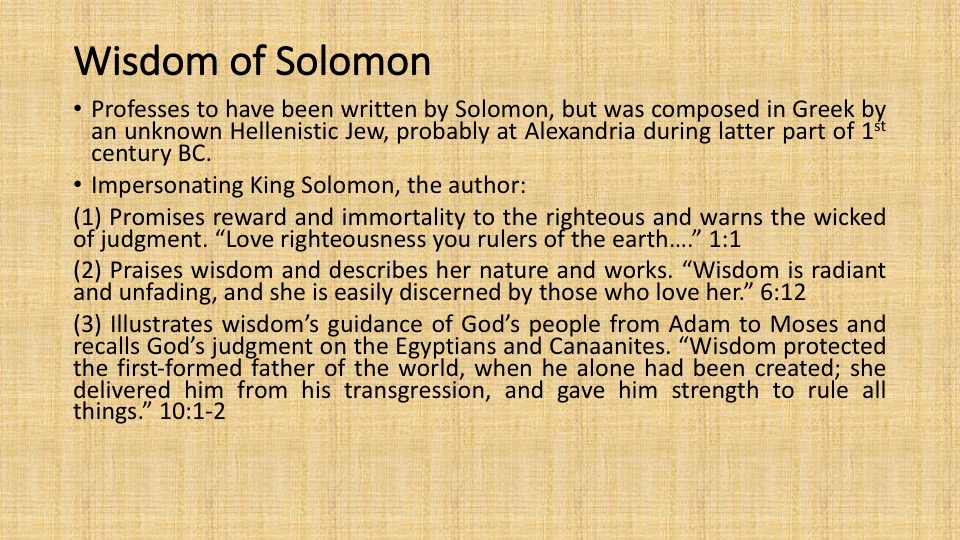 Professes to have been written by Solomon, but was composed in Greek by an unknown Hellenistic Jew, probably at Alexandria during latter part of 1st century BC.

(1) Promises reward and immortality to the righteous and warns the wicked of judgment. “Love righteousness you rulers of the earth….” 1:1

(2) Praises wisdom and describes her nature and works. “Wisdom is radiant and unfading, and she is easily discerned by those who love her.” 6:12

(3) Illustrates wisdom’s guidance of God’s people from Adam to Moses and recalls God’s judgment on the Egyptians and Canaanites. “Wisdom protected the first-formed father of the world, when he alone had been created; she delivered him from his transgression, and gave him strength to rule all things.” 10:1-2 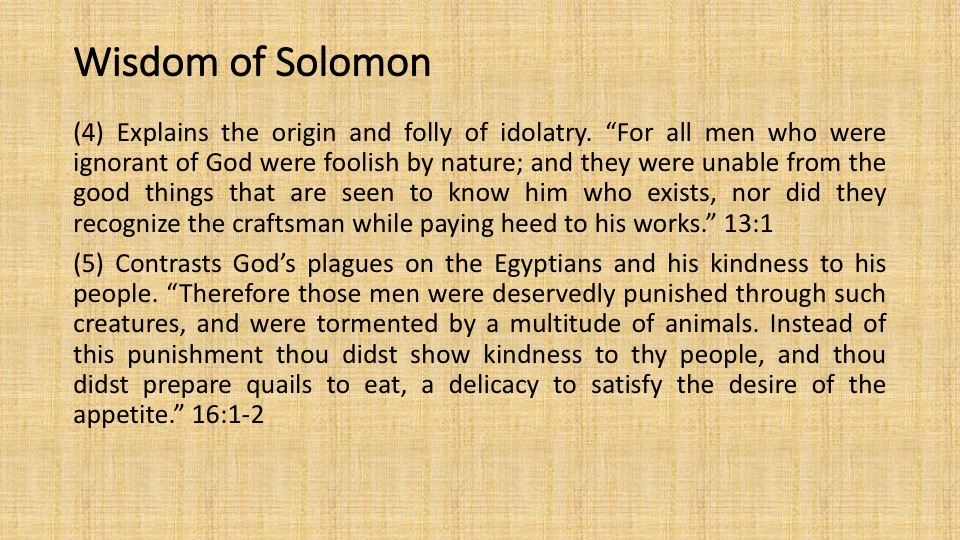 (4) Explains the origin and folly of idolatry. “For all men who were ignorant of God were foolish by nature; and they were unable from the good things that are seen to know him who exists, nor did they recognize the craftsman while paying heed to his works.” 13:1

(5) Contrasts God’s plagues on the Egyptians and his kindness to his people. “Therefore those men were deservedly punished through such creatures, and were tormented by a multitude of animals. Instead of this punishment thou didst show kindness to thy people, and thou didst prepare quails to eat, a delicacy to satisfy the desire of the appetite.” 16:1-2 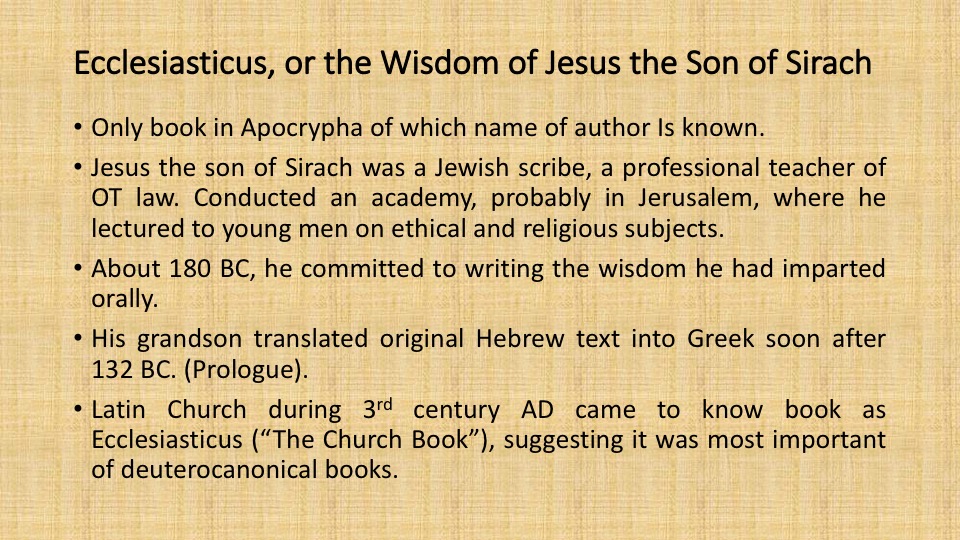 Ecclesiasticus, (Wisdom of Jesus the Son of Sirach)

Only book in Apocrypha of which name of author Is known.

Jesus the son of Sirach was a Jewish scribe, a professional teacher of OT law. Conducted an academy, probably in Jerusalem, where he lectured to young men on ethical and religious subjects.

About 180 BC, he committed to writing the wisdom he had imparted orally.

His grandson translated original Hebrew text into Greek soon after 132 BC. (Prologue).

Latin Church during 3rd century AD came to know book as Ecclesiasticus (“The Church Book”), suggesting it was most important of deuterocanonical books. 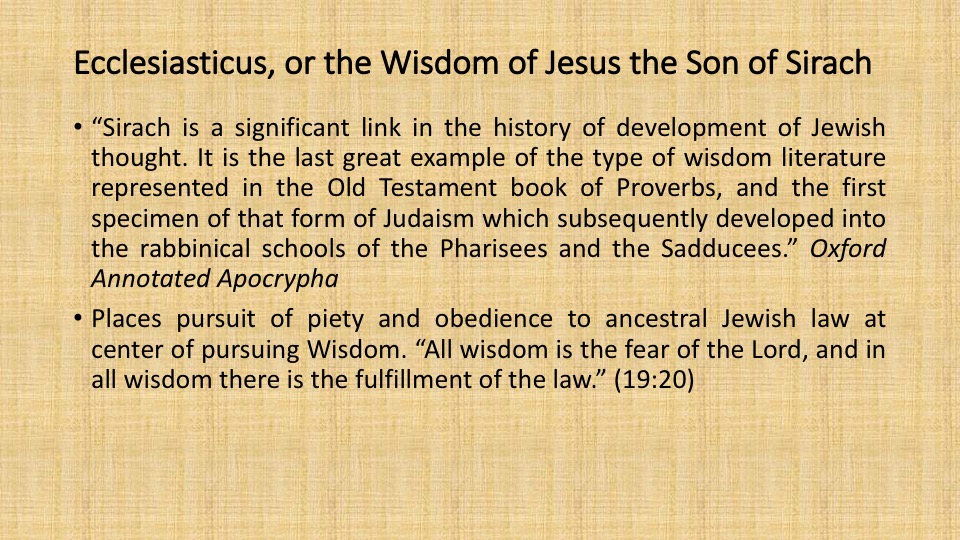 Ecclesiasticus, (Wisdom of Jesus the Son of Sirach)

“Sirach is a significant link in the history of development of Jewish thought. It is the last great example of the type of wisdom literature represented in the Old Testament book of Proverbs, and the first specimen of that form of Judaism which subsequently developed into the rabbinical schools of the Pharisees and the Sadducees.” Oxford Annotated Apocrypha.

Places pursuit of piety and obedience to ancestral Jewish law at center of pursuing Wisdom. “All wisdom is the fear of the Lord, and in all wisdom there is the fulfillment of the law.” (19:20). 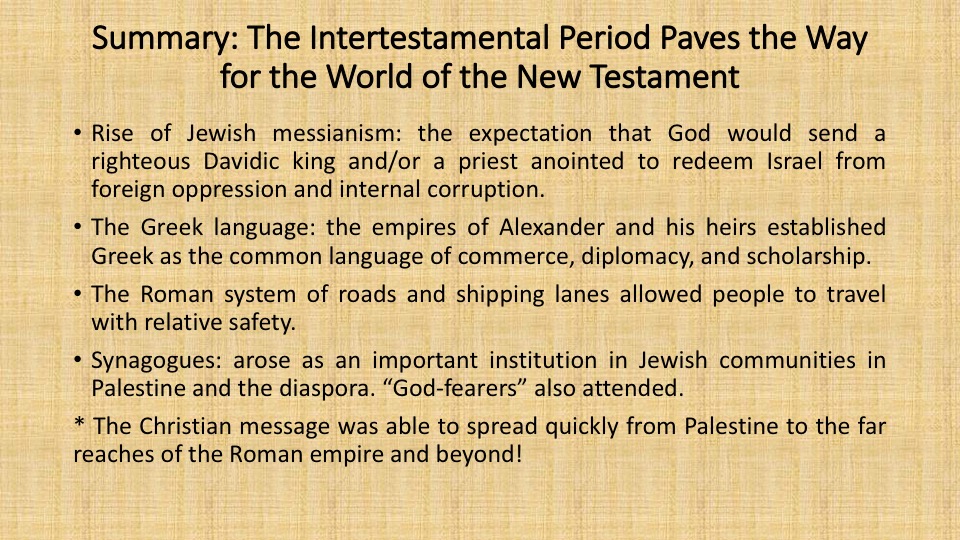 Summary: The Intertestamental Period Paves the Way for the World of the New Testament

Rise of Jewish messianism: the expectation that God would send a righteous Davidic king and/or a priest anointed to redeem Israel from foreign oppression and internal corruption.

The Greek language: the empires of Alexander and his heirs established Greek as the common language of commerce, diplomacy, and scholarship.

The Roman system of roads and shipping lanes allowed people to travel with relative safety.

Synagogues: arose as an important institution in Jewish communities in Palestine and the diaspora. “God-fearers” also attended.

The Christian message was able to spread quickly from Palestine to the far reaches of the Roman empire and beyond!