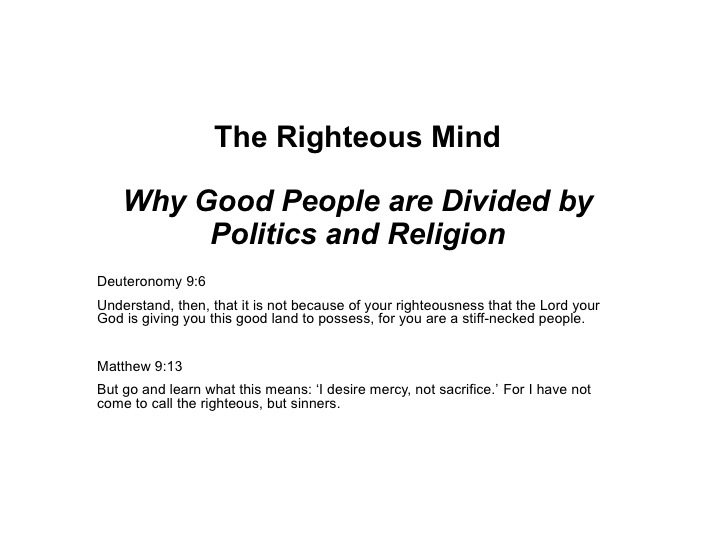 Why Good People are Divided by Politics and Religion

"Understand, then, that it is not because of your righteousness that the Lord your God is giving you this good land to possess, for you are a stiff-necked people."

"But go and learn what this means: ‘I desire mercy, not sacrifice.’  For I have not come to call the righteous, but sinners." 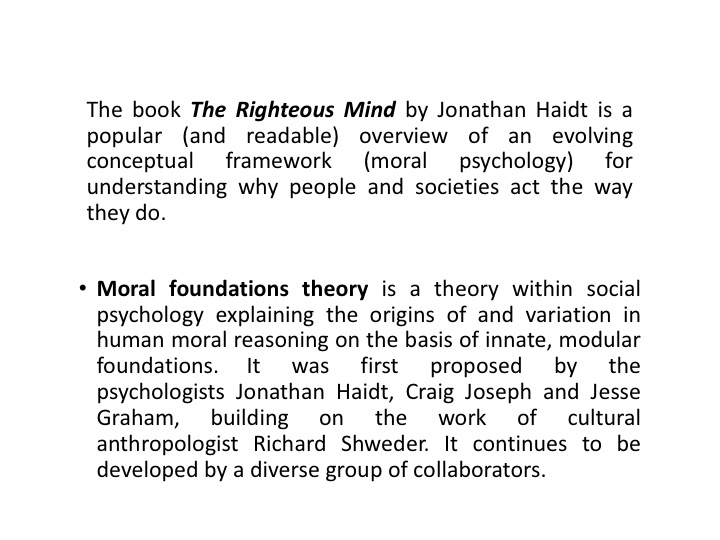 The book The Righteous Mind by Jonathan Haidt is a popular (and readable) overview of an evolving conceptual framework (moral psychology) for understanding why people and societies act the way they do.

Moral foundations theory is a theory within social psychology explaining the origins of and variation in human moral reasoning on the basis of innate, modular foundations. It was first proposed by the psychologists Jonathan Haidt, Craig Joseph and Jesse Graham, building on the work of cultural anthropologist Richard Shweder. It continues to be developed by a diverse group of collaborators. 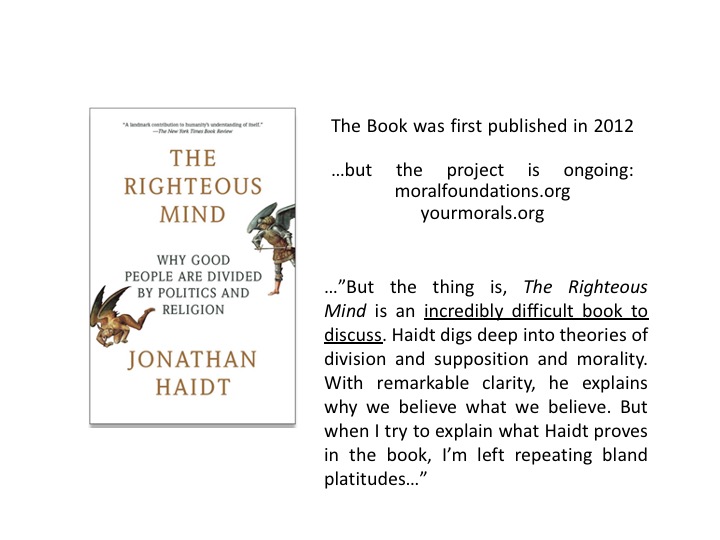 The Righteous Mind was first published in 2012
…but the project is ongoing:
moralfoundations.org
yourmorals.org

…”But the thing is, The Righteous Mind is an incredibly difficult book to discuss. Haidt digs deep into theories of division and supposition and morality. With remarkable clarity, he explains why we believe what we believe. But when I try to explain what Haidt proves in the book, I’m left repeating bland platitudes…” 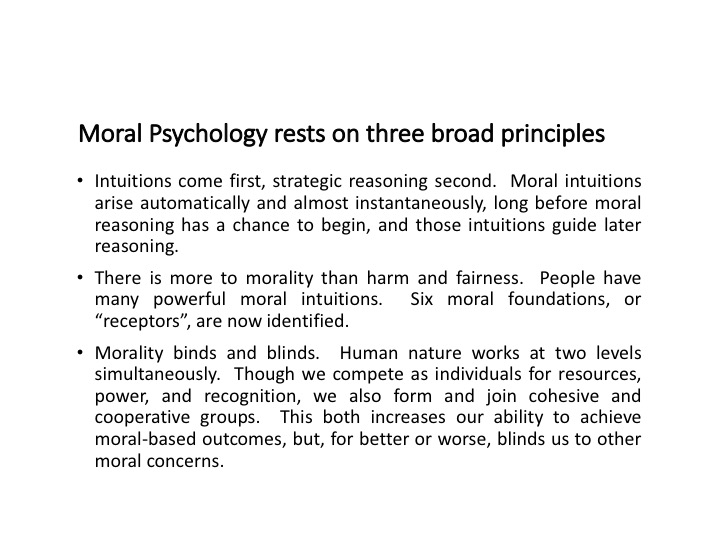 There is more to morality than harm and fairness.  People have many powerful moral intuitions.  Six moral foundations, or “receptors”, are now identified.

Morality binds and blinds.  Human nature works at two levels simultaneously.  Though we compete as individuals for resources, power, and recognition, we also form and join cohesive and cooperative groups.  This both increases our ability to achieve moral-based outcomes, but, for better or worse, blinds us to other moral concerns. 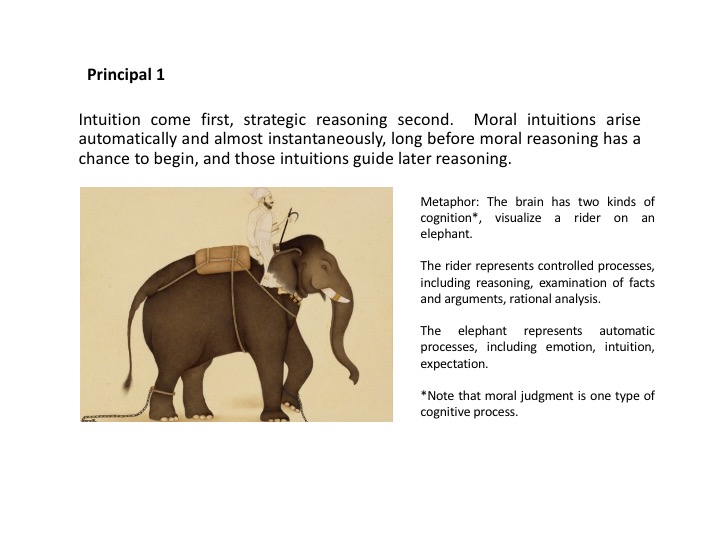 Metaphor: The brain has two kinds of cognition*, visualize a rider on an elephant.

*Note that moral judgment is one type of cognitive process. 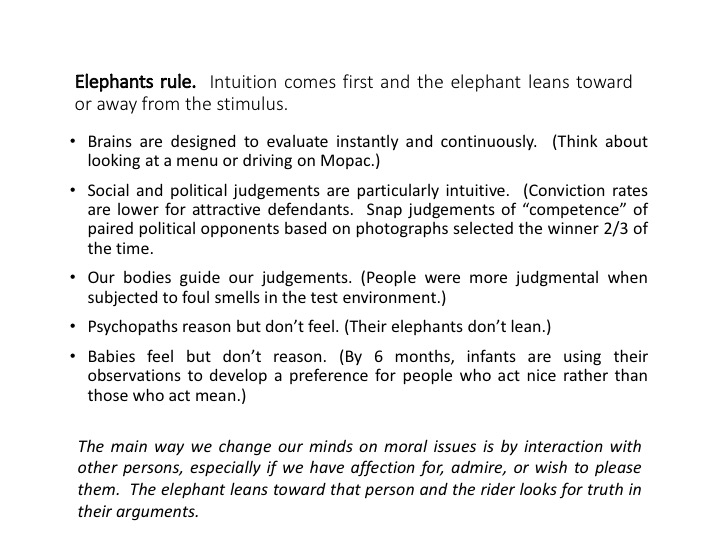 Elephants rule.  Intuition comes first and the elephant leans toward or away from the stimulus.

Brains are designed to evaluate instantly and continuously.  (Think about looking at a menu or driving on Mopac.)

Social and political judgements are particularly intuitive.  (Conviction rates are lower for attractive defendants.  Snap judgements of “competence” of paired political opponents based on photographs selected the winner 2/3 of the time.

Our bodies guide our judgements. (People were more judgmental when subjected to foul smells in the test environment.)

Babies feel but don’t reason. (By 6 months, infants are using their observations to develop a preference for people who act nice rather than those who act mean.)

The main way we change our minds on moral issues is by interaction with other persons, especially if we have affection for, admire, or wish to please them.  The elephant leans toward that person and the rider looks for truth in their arguments. 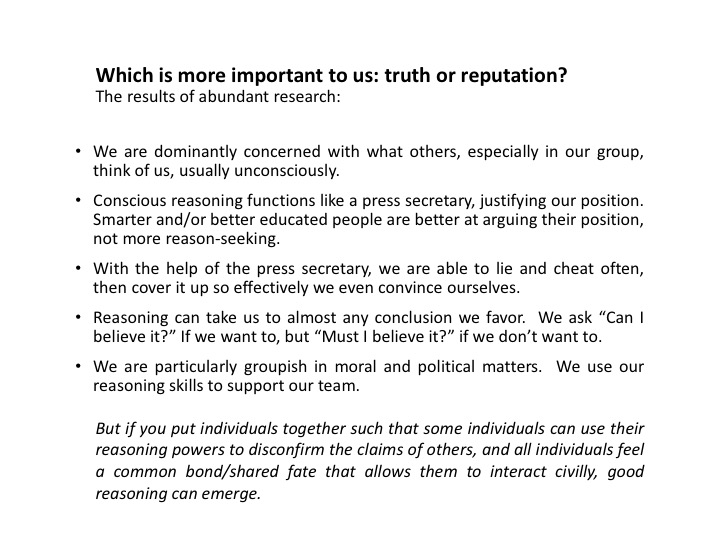 Which is more important to us: truth or reputation?
The results of abundant research:

We are dominantly concerned with what others, especially in our group, think of us, usually unconsciously.

Conscious reasoning functions like a press secretary, justifying our position.  Smarter and/or better educated people are better at arguing their position, not more reason-seeking.

With the help of the press secretary, we are able to lie and cheat often, then cover it up so effectively we even convince ourselves.

We are particularly groupish in moral and political matters.  We use our reasoning skills to support our team.

But if you put individuals together such that some individuals can use their reasoning powers to disconfirm the claims of others, and all individuals feel a common bond/shared fate that allows them to interact civilly, good reasoning can emerge. 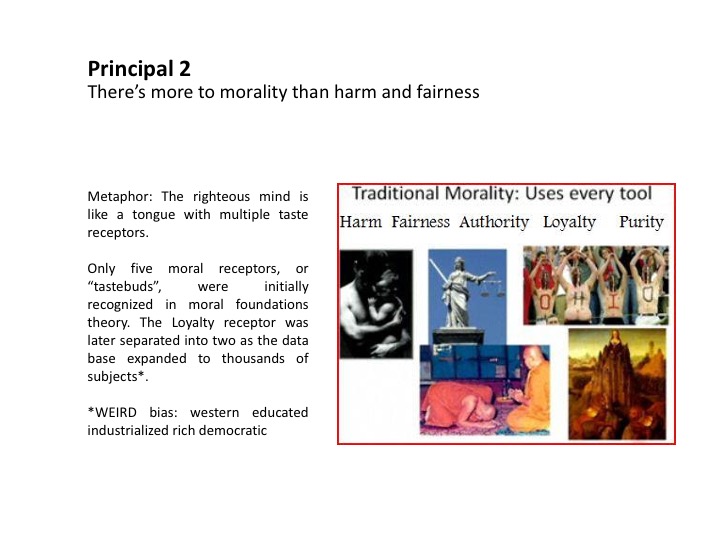 Principal 2
There’s more to morality than harm and fairness

Metaphor: The righteous mind is like a tongue with multiple taste receptors.

Only five moral receptors, or “tastebuds”, were initially recognized in moral foundations theory. The Loyalty receptor was later separated into two as the data base expanded to thousands of subjects*. 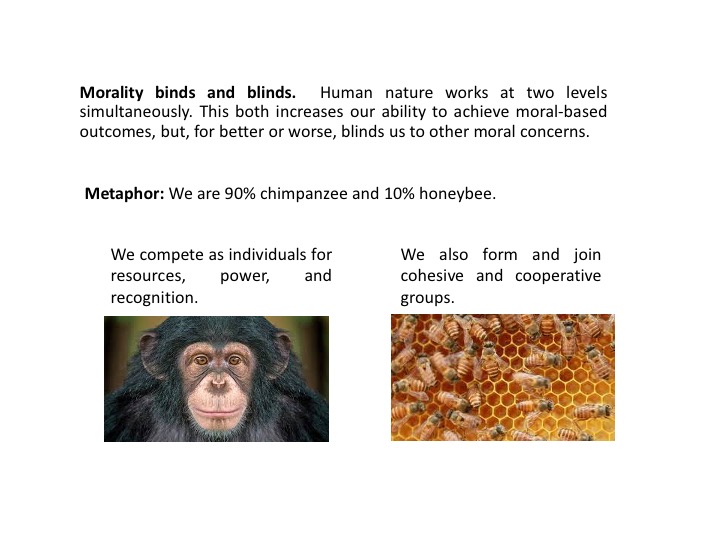 Morality binds and blinds.  Human nature works at two levels simultaneously. This both increases our ability to achieve moral-based outcomes, but, for better or worse, blinds us to other moral concerns.

We compete as individuals for resources, power, and recognition.

We also form and join cohesive and cooperative groups. 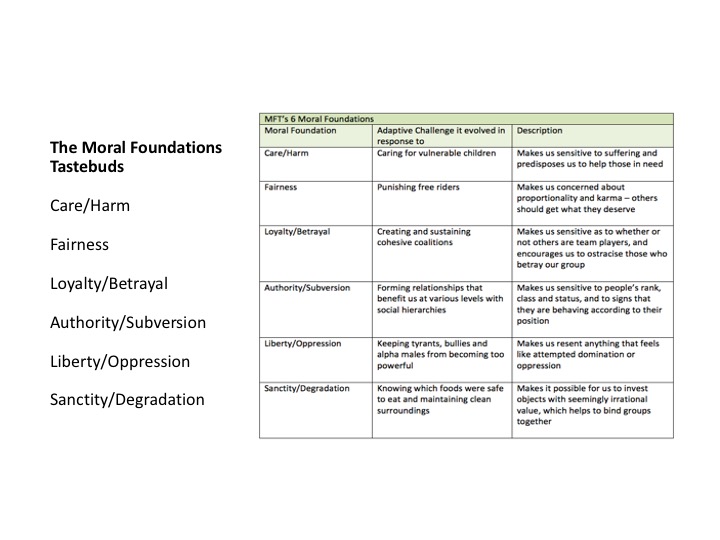 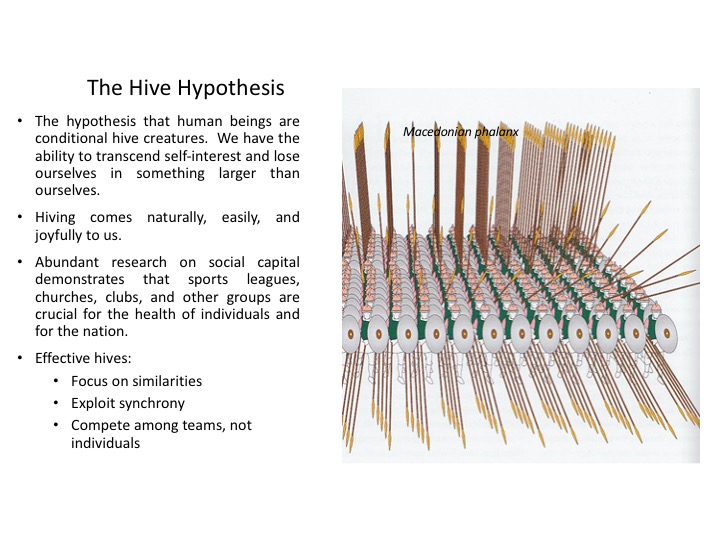 The hypothesis that human beings are conditional hive creatures.  We have the ability to transcend self-interest and lose ourselves in something larger than ourselves.

Hiving comes naturally, easily, and joyfully to us.

Abundant research on social capital demonstrates that sports leagues, churches, clubs, and other groups are crucial for the health of individuals and for the nation.

Compete among teams, not individuals. 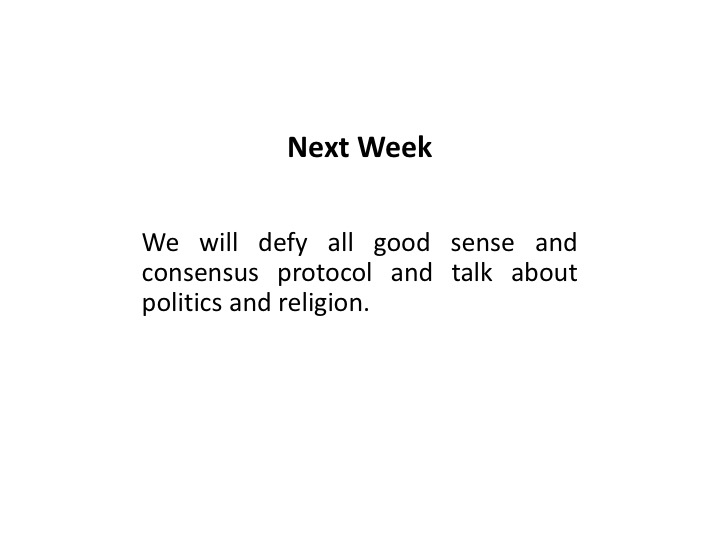 Next Week on the Righteous Mind

We will defy all good sense and consensus protocol and talk about politics and religion.