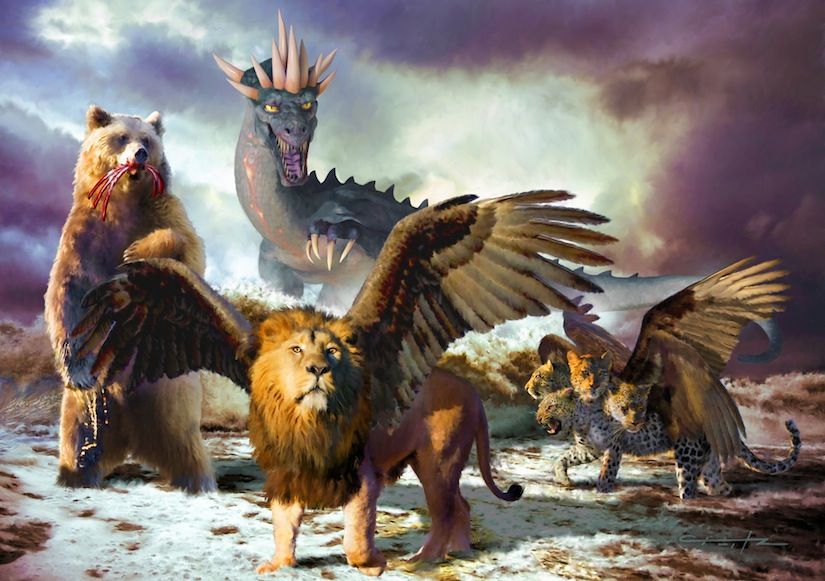 I. Re-cap and Introduction

A. Chapter 7 – The accounts in chapters 7-12 are from Daniel’s perspective. And these in chapter 7 occurred before the events in chapter 5. It bears resemblance to Nebuchadnezzar’s dream in chapter 2. This is Daniel’s dream of the four beasts.

3 Four mighty beasts different from each other emerged from the sea.  4  The first was like a lion but had eagles’ wings.  As I looked on, its wings were plucked off, and it was lifted off the ground and set on its feet like a man and given the mind of a man.  5 Then I saw a second, different beast, which was like a bear but raised on one side, and with three fangs in its mouth among its teeth; it was told, ‘Arise, and eat much meat!’  After that, as I looked on, there was another one like a leopard and it had on its back four wings like those of a bird; the beast had four heads, and dominion was given to it.  7 After that, as I looked on in the night vision, there was a fourth beast---fearsome, dreadful, and very powerful, with great iron teeth---that devoured and crushed and stamped the remains with its feet.  It was different from all other beasts which had gone before it; and it had ten horns.  8 While I was gazing upon these horns, a new little horn sprouted up among them; three of the older horns were uprooted to make room for it.  There were eyes in this horn like those of a man, and a mouth that spoke arrogantly. 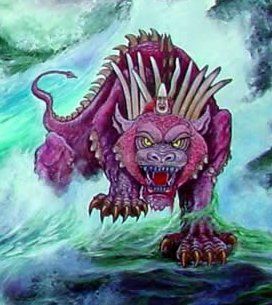 Book of Daniel  -  Fourth Beast with the Little Horn 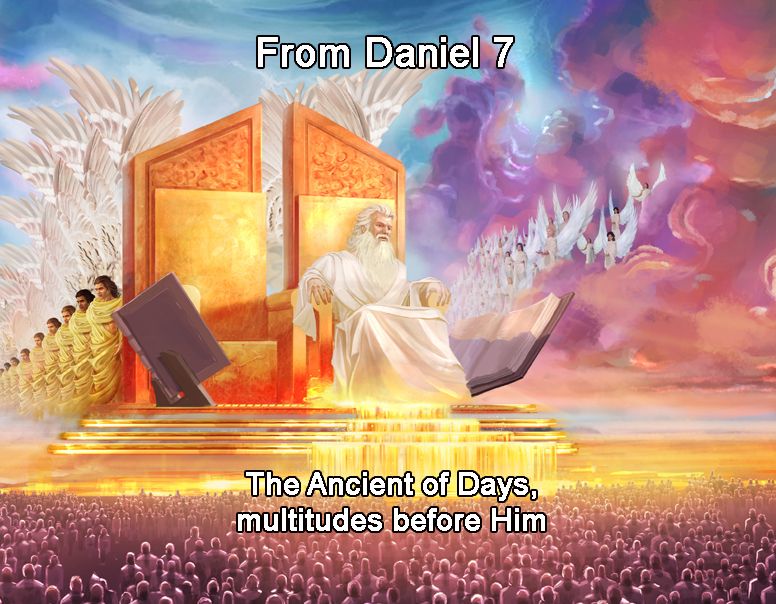 9 As I looked on, thrones were set in place, and the Ancient of Days took His seat.  His garment was like white snow, and the hair of His head was like lamb’s wool. His throne was tongues of flame; its wheels were blazing fire.  10 A river of fire streamed forth before Him; thousands upon thousands served Him; Myriads upon myriads attended Him; the court sat, and the books were opened.

This is a fantastic account of the Divine Tribunal. Note the description of the Ancient One, presumably God. This explicit account is new in the Hebrew Bible. The fire is akin to that described in Ezekiel. The beasts face downfall.

13  As I looked on, in the night vision, one like a human being came with clouds of heaven; He reached the Ancient of Days and was presented to him.  14 dominion, glory and kingship were given to him; all peoples and nations of every language must serve him.  His dominion is an everlasting dominion that shall not pass away, And his kingship one that shall not be destroyed.  As for me, Daniel, my spirit was disturbed within me and the vision of my mind alarmed me.  16 I approached one of the attendants and asked him the true meaning of all this.  He gave me this interpretation of the matter:  17 These great beasts, four in number(mean) four kingdoms will rise out of the earth’ 18 then holy ones of the Most High will receive the kingdom and will possess the kingdom forever---forever and ever.  19 Then I wanted to ascertain the true meaning of the fourth beast, which was different from them all, very fearsome, with teeth of iron, claws of bronze, that devoured and crushed, and stamped the remains;  20 and of the ten horns on its head; and of the new one that sprouted, to make room for which three fell---the horn that had eyes, and a mouth that spoke arrogantly, and which was more conspicuous than its fellows.  21 (I looked on as that horn made war with the holy ones and overcame them, 22  until the Ancient of Days came and judgement was rendered in favor of the holy ones of the Most High, for the time had come, and the holy ones took possession of the kingdom)

One in a human likeness seems to be given dominion, honor, and kingship that will not be destroyed. Is this the Messiah? Is this a foretelling of Jesus? Or, as indicated by the angel who tells Daniel the meaning of his dream, is it a leader who serves on behalf of the “high holy ones” who receive this kingship, as mentioned in verses 18 and 21-22. Who are these high holy ones? Is one true, or can both be? How might this be about the End of Days?

B. Read 9:3-19. This is a glorious prayer that Daniel offers to God seeking redemption for the people, perhaps at a time earlier than that prophesied by Jeremiah. What elements of this prayer seem essential to you and fit into your prayers? And how?

3 I turned my face to the Lord God, devoting myself to prayer and supplication, I fasting, in sackcloth and ashes.  4 I prayed to the Lord my God, making confession thus:  “O Lord, great and awesome God, who stays faithful to His covenant with those who love Him and keep His commandments!  5  We have sinned; we have gone astray; we have acted wickedly; we have been rebellious and have deviated from Your commandments and Your rules, 6  and have not obeyed Your servants the prophets who spoke in Your name to our kings, our officers, our fathers, and all the people of the land.  7  With You, O Lord, is the right, and the shame is on us to this very day, on the men of Judah and the inhabitants of Jerusalem, all Israel, near and far, in all the lands where You have banished them, for the trespass they committed against You.  8 The shame, O Lord, is on us, on our kings, our officers and our fathers, because we have sinned against You.  9 To the Lord our God belong mercy and forgiveness, for we rebelled against Him, 10 and did not obey the Lord our God by following His teachings that He set before us through His servants the prophets.    11  All Israel has violated Your teaching and gone astray, disobeying You, so the curse and the oath  written in the Teaching of Moses, the servant of God have been poured down upon us for we gave sinned against Him,  12  He carried out the threat that He made against us, and against our rulers who ruled us, to bring upon us great misfortune; under she whole heaven there has never been done the like of what was done to Jerusalem.  13 All that calamity just as is written in the Teaching of Moses, came upon us, yet we did not supplicate the Lord our God, did not repent of our iniquity or become wise through Your truth.  14  Hence the Lord was intent upon bringing calamity upon us, for the Lord our God is in the right in all that He has done, but we have not obeyed Him.15  “Now, O Lord our God---You who brought Your people out of the land of Egypt with a mighty hand, winning fame for Yourself to this very day---we have sinned, we have acted wickedly.  16 O Lord, as befits Your abundant benevolence, let Your wrathful fury turn back from Your city Jerusalem, Your holy mountain, for because of our sins and the iniquities of our fathers, Jerusalem and Your people have become a mockery among all who are around us.   17 O our God hear now the prayer of Your servant and his plea and show Your favor to Your desolate sanctuary for the Lord’s sake.  18 Incline Your ear, O my God, and hear, open Your eyes and see our desolation and the city to which Your name is attached.  Not because of any merit of ours do we lay our plea before You but because of Your abundant mercies.  19 O Lord, hear!  O Lord, forgive! O Lord, list and act without delay for Your own sake, O my God’ for Your name is attached to Your city and Your people!”

C. Read 12:1-3. First, we see that Michael, the greatly heavenly prince, “stands in support of your people.”  We see there will be a time of trouble “such as never was.” We see that the people will escape. Finally, we come to verses 2 and 3.

12 “At that time, the great prince, Michael, who stands beside the sons of your people, will appear.  It will be a time of trouble, the like of which has never been since the nation came into being.  At that time, your people will be rescued, all who are found inscribed in the book.  2 Many of those that sleep in the dust of the earth will awake, some to eternal life, others to reproaches, to everlasting abhorrence.  3 And the knowledgeable will be radiant like the bright expanse of sky, and those who lead the many to righteousness will be like the stars forever and ever.

1.This is the sharpest account of resurrection in the Hebrew Bible. What do you make of it?

2. Who are the wise? What makes them wise? What might it mean to “shine like the radiance of the firmament?

4 “But you, Daniel, keep the words secret, and seal the book until the time of the end.  Many will range far and wide and knowledge will increase. 5 Then I Daniel looked and saw two others standing, one on one bank of the river, the other on the other bank of the river. 6 One said to the man clothed in linen, who was above the water of the river, "How long until the end of these awful things?" 7 Then I heard the man dressed in linen, who was above the water of the river, swear by the Ever-Living One as he lifted his right hand and his left hand to heaven: "For a time, times, and a half a time, and when the breaking of the power of the holy people comes to an end, then shall all these things be fulfilled.

8 I heard and did not understand, so I said, "My Lord, what will be the outcome of these things? 9 He said "Go Daniel, for these words are secret and sealed to the time of the end. 10 Many will be purified and purged and refined, the wicked will act wickedly and none of the wicked will understand; but the knowledgeable will understand. 11 From the time the regular offering is abolished, an appalling abomination is set up - it will be a thousand two hundred and ninety days. 12 Happy the one who waits and reaches one thousand three hundred and thirty -five days.

13 But you, go to the end, you shall rest, and arise to your destiny at the end of the days."

In the Epilogue, Daniel is told in 12:4, “to obscure the matters and seal the book until the time of the End, and let many muse and let knowledge increase.”

Yet, Daniel (like we and commentators and sages since) remains curious, when he sees two men toward the end, with one asking, “How long to the hidden End?”

While discussing yet another specific number of years that raises his (and our) interest, one says to Daniel in verse 9, “Go, Daniel! For the matters are obscured and sealed till the time of the End.”

Then, after yet additional speculation on the time until the End, Daniel is told in the very final verse of the Book, “And as for you, go to the end; you will rest and arise to your lot at the End of the Days.”

What do you think is meant to be learned by Daniel and by us in these final verses of the Book?