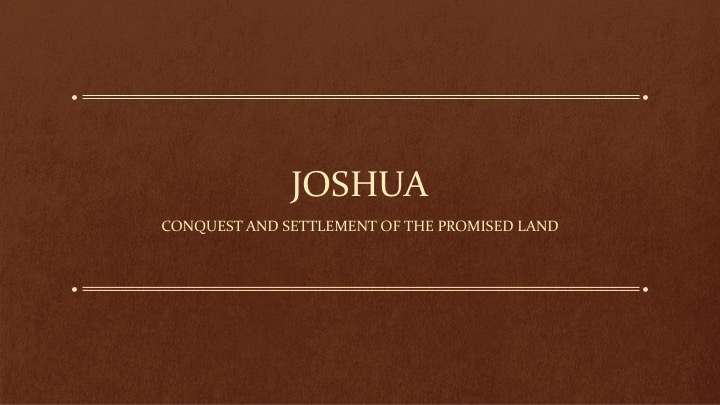 We are now on lesson 2 of Joshua and Judges. And this lesson takes up where we finished in Lesson 1 and finishes up the conquest and settlement of the promised land. 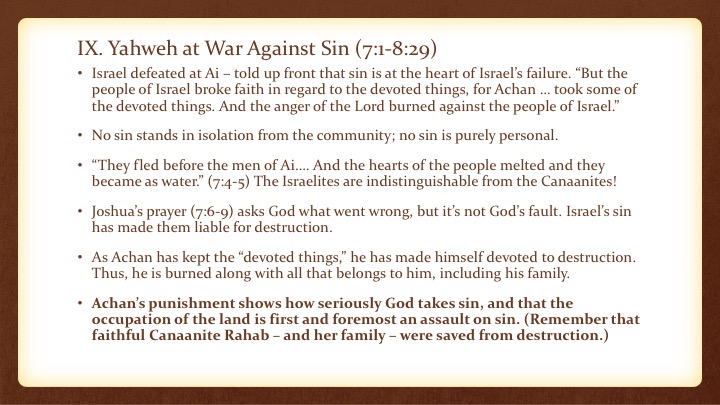 No sin stands in isolation from the community; no sin is purely personal.

“They fled before the men of Ai…. And the hearts of the people melted and they became as water.” (7:4-5) The Israelites are indistinguishable from the Canaanites!

Joshua’s prayer (7:6-9) asks God what went wrong, but it’s not God’s fault. Israel’s sin has made them liable for destruction.

As Achan has kept the “devoted things,” he has made himself devoted to destruction. Thus, he is burned along with all that belongs to him, including his family.

Achan’s punishment shows how seriously God takes sin, and that the occupation of the land is first and foremost an assault on sin. (Remember that faithful Canaanite Rahab – and her family – were saved from destruction.) 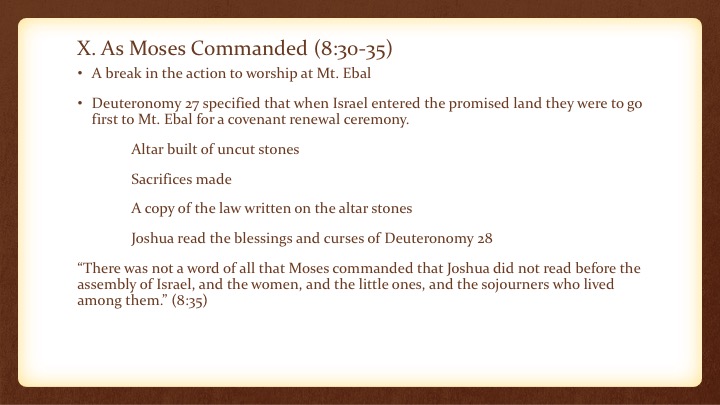 A break in the action to worship at Mt. Ebal

Deuteronomy 27 specified that when Israel entered the promised land they were to go first to Mt. Ebal for a covenant renewal ceremony.

A copy of the law written on the altar stones

Joshua read the blessings and curses of Deuteronomy 28

“There was not a word of all that Moses commanded that Joshua did not read before the assembly of Israel, and the women, and the little ones, and the sojourners who lived among them.” (8:35) 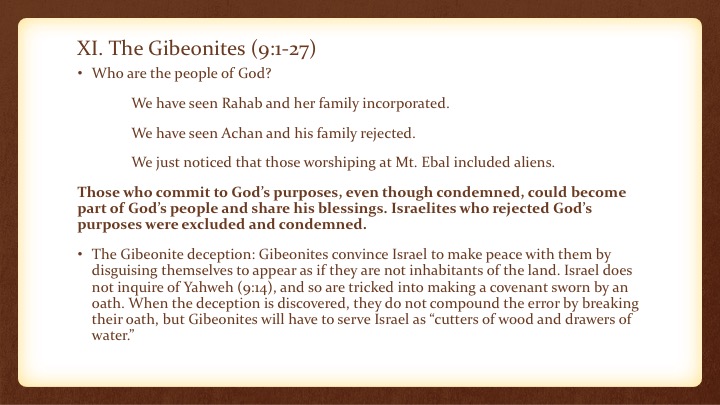 Who are the people of God?

We have seen Rahab and her family incorporated.

We have seen Achan and his family rejected.

We just noticed that those worshiping at Mt. Ebal included aliens.

Those who commit to God’s purposes, even though condemned, could become part of God’s people and share his blessings. Israelites who rejected God’s purposes were excluded and condemned.

The Gibeonite deception: Gibeonites convince Israel to make peace with them by disguising themselves to appear as if they are not inhabitants of the land. Israel does not inquire of Yahweh (9:14), and so are tricked into making a covenant sworn by an oath. When the deception is discovered, they do not compound the error by breaking their oath, but Gibeonites will have to serve Israel as “cutters of wood and drawers of water.” 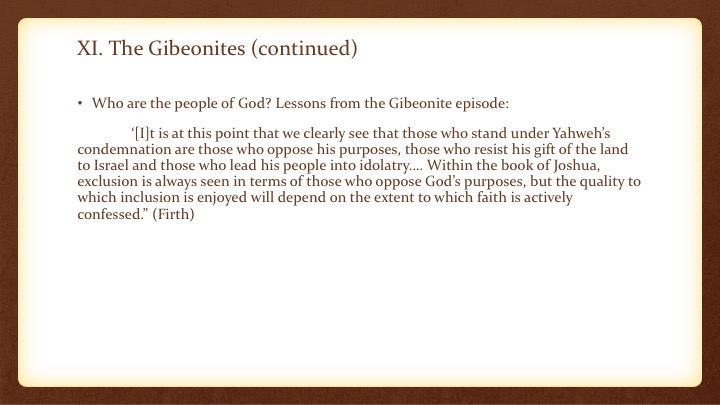 Who are the people of God? Lessons from the Gibeonite episode:

‘[I]t is at this point that we clearly see that those who stand under Yahweh’s condemnation are those who oppose his purposes, those who resist his gift of the land to Israel and those who lead his people into idolatry…. Within the book of Joshua, exclusion is always seen in terms of those who oppose God’s purposes, but the quality to which inclusion is enjoyed will depend on the extent to which faith is actively confessed.” (Firth) 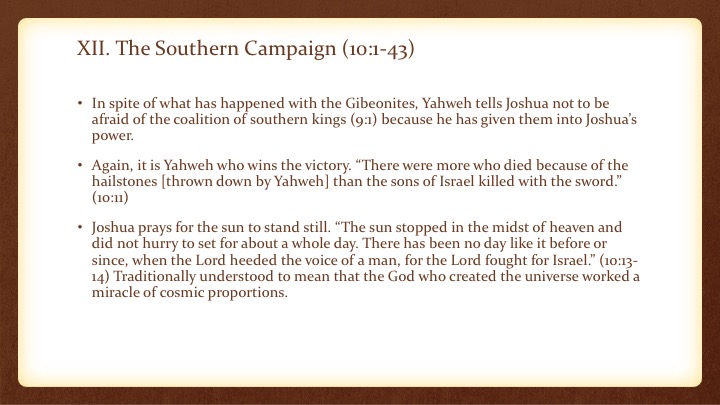 In spite of what has happened with the Gibeonites, Yahweh tells Joshua not to be afraid of the coalition of southern kings (9:1) because he has given them into Joshua’s power.

Again, it is Yahweh who wins the victory. “There were more who died because of the hailstones [thrown down by Yahweh] than the sons of Israel killed with the sword.” (10:11)

Joshua prays for the sun to stand still. “The sun stopped in the midst of heaven and did not hurry to set for about a whole day. There has been no day like it before or since, when the Lord heeded the voice of a man, for the Lord fought for Israel.” (10:13-14) Traditionally understood to mean that the God who created the universe worked a miracle of cosmic proportions. 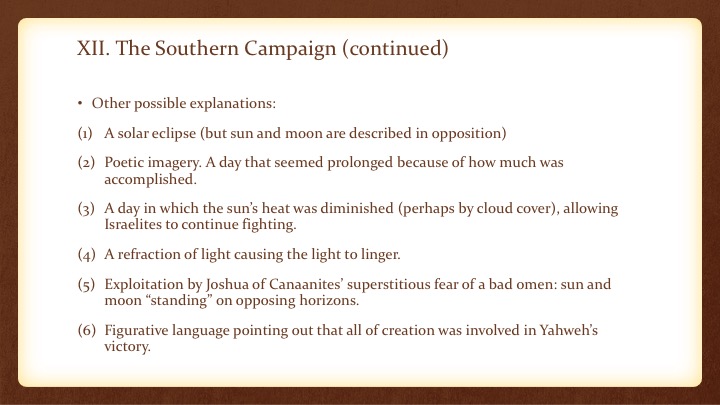 (2)Poetic imagery. A day that seemed prolonged because of how much was accomplished.

(3)A day in which the sun’s heat was diminished (perhaps by cloud cover), allowing Israelites to continue fighting.

(4)A refraction of light causing the light to linger.

(5)Exploitation by Joshua of Canaanites’ superstitious fear of a bad omen: sun and moon “standing” on opposing horizons.

(6)Figurative language pointing out that all of creation was involved in Yahweh’s victory. 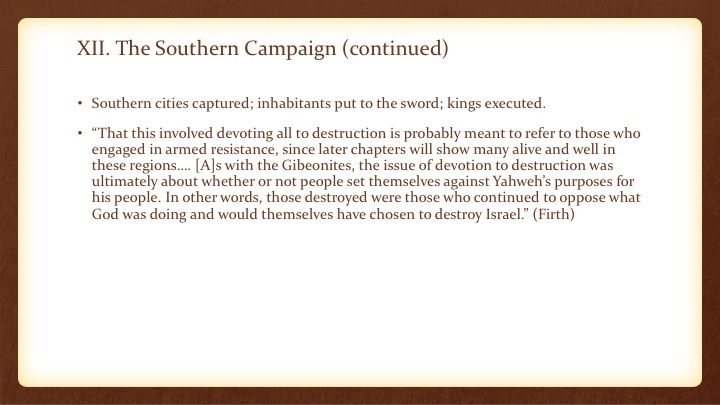 “That this involved devoting all to destruction is probably meant to refer to those who engaged in armed resistance, since later chapters will show many alive and well in these regions…. [A]s with the Gibeonites, the issue of devotion to destruction was ultimately about whether or not people set themselves against Yahweh’s purposes for his people. In other words, those destroyed were those who continued to oppose what God was doing and would themselves have chosen to destroy Israel.” (Firth) 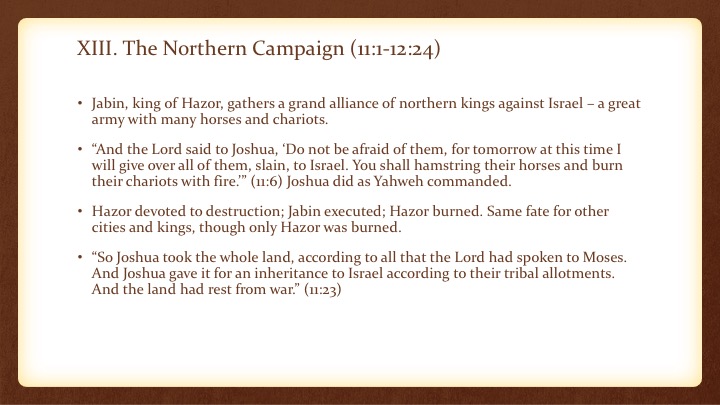 Jabin, king of Hazor, gathers a grand alliance of northern kings against Israel – a great army with many horses and chariots.

“And the Lord said to Joshua, ‘Do not be afraid of them, for tomorrow at this time I will give over all of them, slain, to Israel. You shall hamstring their horses and burn their chariots with fire.’” (11:6) Joshua did as Yahweh commanded.

Hazor devoted to destruction; Jabin executed; Hazor burned. Same fate for other cities and kings, though only Hazor was burned.

“So Joshua took the whole land, according to all that the Lord had spoken to Moses. And Joshua gave it for an inheritance to Israel according to their tribal allotments. And the land had rest from war.” (11:23) 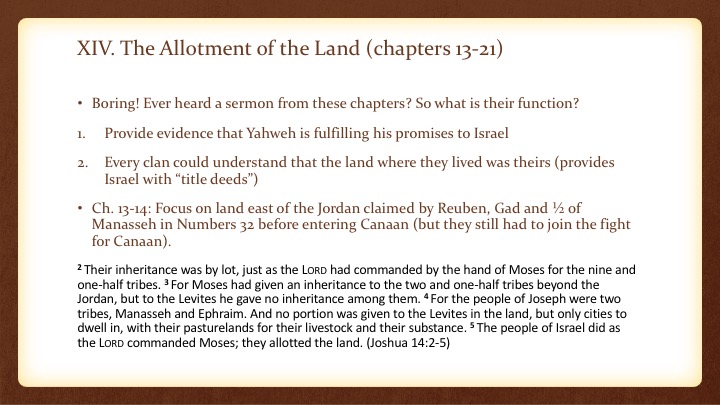 Boring! Ever heard a sermon from these chapters? So what is their function?

1.Provide evidence that Yahweh is fulfilling his promises to Israel

2.Every clan could understand that the land where they lived was theirs (provides Israel with “title deeds”)

Ch. 13-14: Focus on land east of the Jordan claimed by Reuben, Gad and ½ of Manasseh in Numbers 32 before entering Canaan (but they still had to join the fight for Canaan).

2 Their inheritance was by lot, just as the Lord had commanded by the hand of Moses for the nine and one-half tribes. 3 For Moses had given an inheritance to the two and one-half tribes beyond the Jordan, but to the Levites he gave no inheritance among them. 4 For the people of Joseph were two tribes, Manasseh and Ephraim. And no portion was given to the Levites in the land, but only cities to dwell in, with their pasturelands for their livestock and their substance. 5 The people of Israel did as the Lord commanded Moses; they allotted the land. (Joshua 14:2-5) 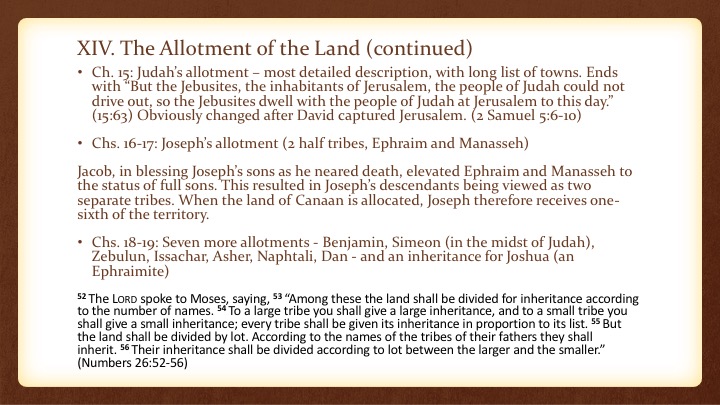 XIV. The Allotment of the Land (continued)

Jacob, in blessing Joseph’s sons as he neared death, elevated Ephraim and Manasseh to the status of full sons. This resulted in Joseph’s descendants being viewed as two separate tribes. When the land of Canaan is allocated, Joseph therefore receives one-sixth of the territory.

Chs. 18-19: Seven more allotments - Benjamin, Simeon (in the midst of Judah), Zebulun, Issachar, Asher, Naphtali, Dan - and an inheritance for Joshua (an Ephraimite) 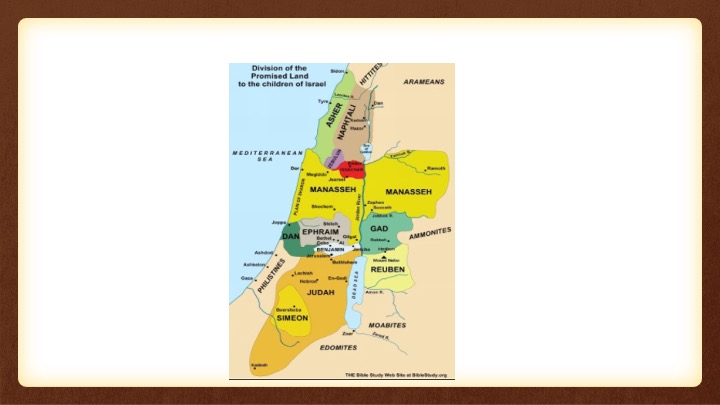 A Map of the Allotment.

The above map shows how the Promised Land was initially divided among the twelve tribes of Israel. The tribes listed above are named after the sons of Jacob. The patriarch had his name changed to Israel after wrestling with and prevailing over an angel (see Genesis 32). 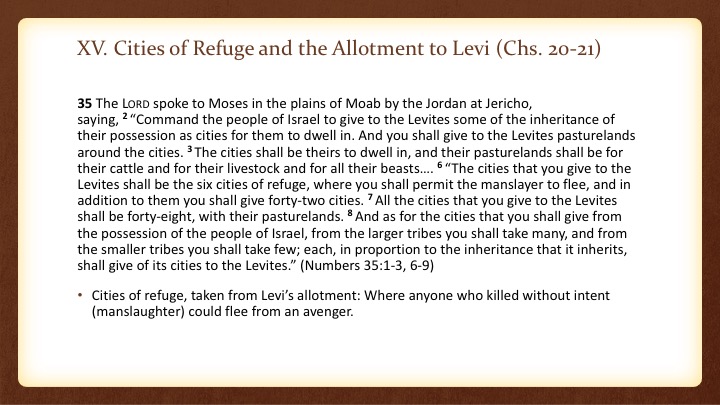 Cities of refuge, taken from Levi’s allotment: Where anyone who killed without intent (manslaughter) could flee from an avenger. 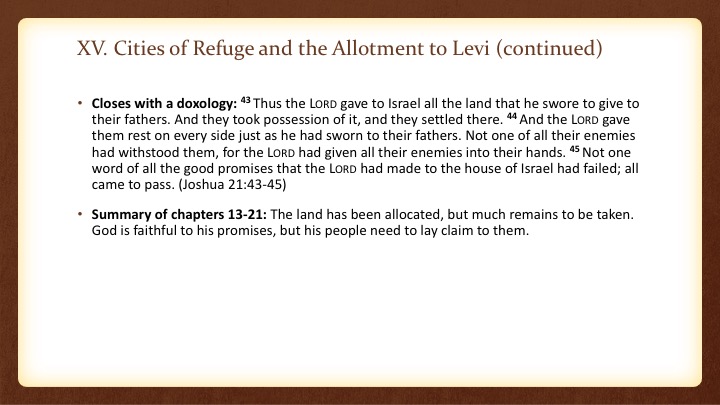 XV. Cities of Refuge and the Allotment to Levi (continued)

Closes with a doxology: 43 Thus the Lord gave to Israel all the land that he swore to give to their fathers. And they took possession of it, and they settled there. 44 And the Lord gave them rest on every side just as he had sworn to their fathers. Not one of all their enemies had withstood them, for the Lord had given all their enemies into their hands. 45 Not one word of all the good promises that the Lord had made to the house of Israel had failed; all came to pass. (Joshua 21:43-45)

Summary of chapters 13-21: The land has been allocated, but much remains to be taken. God is faithful to his promises, but his people need to lay claim to them. 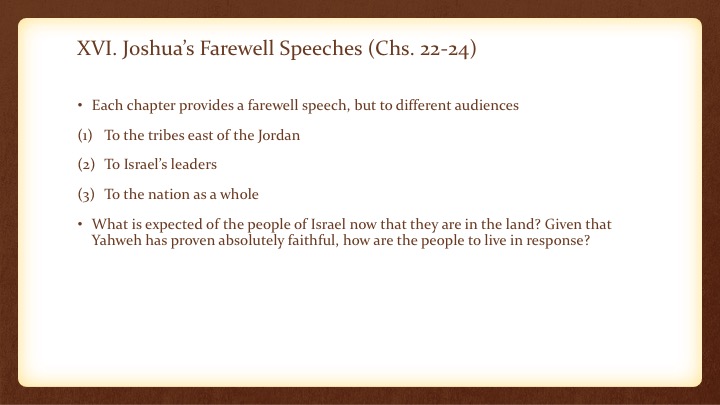 Each chapter provides a farewell speech, but to different audiences

(1) To the tribes east of the Jordan

What is expected of the people of Israel now that they are in the land? Given that Yahweh has proven absolutely faithful, how are the people to live in response? 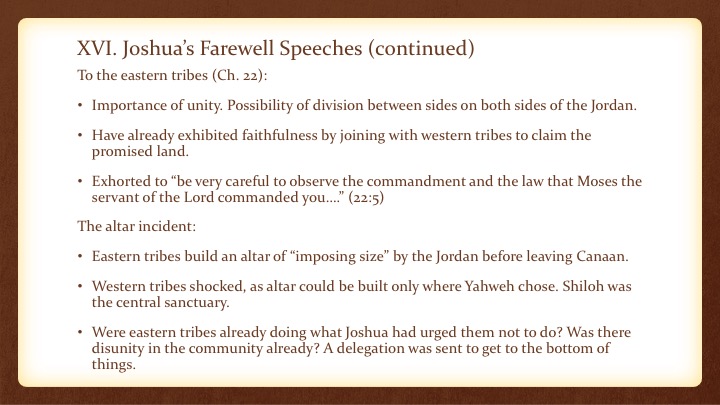 Importance of unity. Possibility of division between sides on both sides of the Jordan.

Have already exhibited faithfulness by joining with western tribes to claim the promised land.

Exhorted to “be very careful to observe the commandment and the law that Moses the servant of the Lord commanded you….” (22:5)

Eastern tribes build an altar of “imposing size” by the Jordan before leaving Canaan.

Western tribes shocked, as altar could be built only where Yahweh chose. Shiloh was the central sanctuary.

Were eastern tribes already doing what Joshua had urged them not to do? Was there disunity in the community already? A delegation was sent to get to the bottom of things. 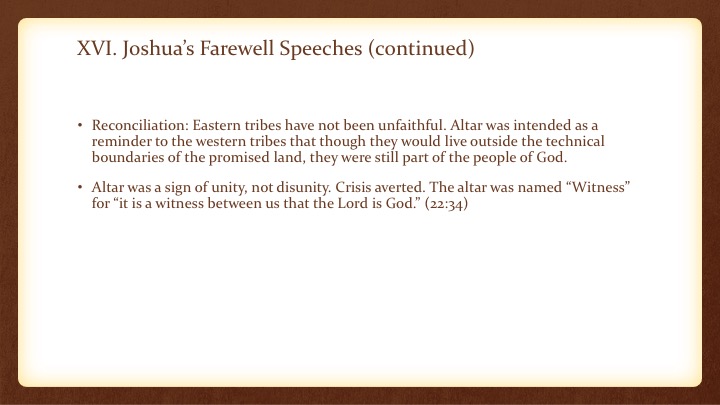 Reconciliation: Eastern tribes have not been unfaithful. Altar was intended as a reminder to the western tribes that though they would live outside the technical boundaries of the promised land, they were still part of the people of God.

Altar was a sign of unity, not disunity. Crisis averted. The altar was named “Witness” for “it is a witness between us that the Lord is God.” (22:34) 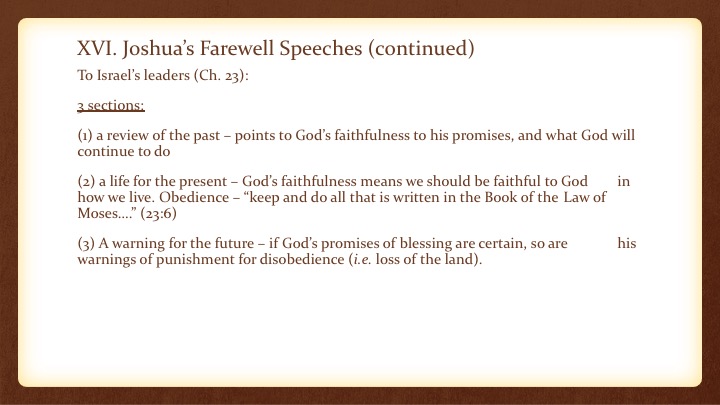 (1) a review of the past – points to God’s faithfulness to his promises, and what God will continue to do

(3) A warning for the future – if God’s promises of blessing are certain, so are   his warnings of punishment for disobedience (i.e. loss of the land). 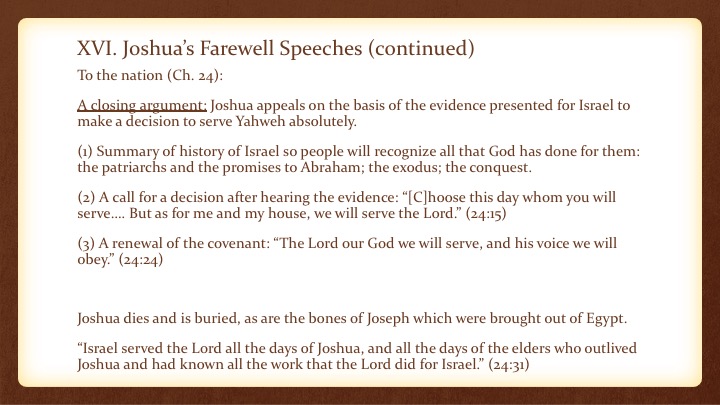 A closing argument: Joshua appeals on the basis of the evidence presented for Israel to make a decision to serve Yahweh absolutely.

(1) Summary of history of Israel so people will recognize all that God has done for them: the patriarchs and the promises to Abraham; the exodus; the conquest.

Joshua dies and is buried, as are the bones of Joseph which were brought out of Egypt.