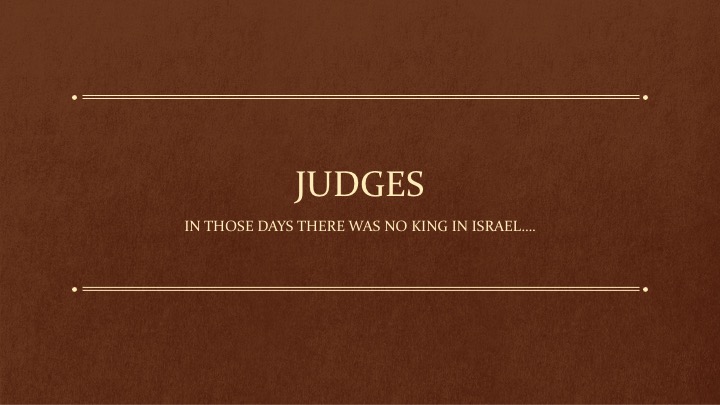 And Now – Here Come The Judges! 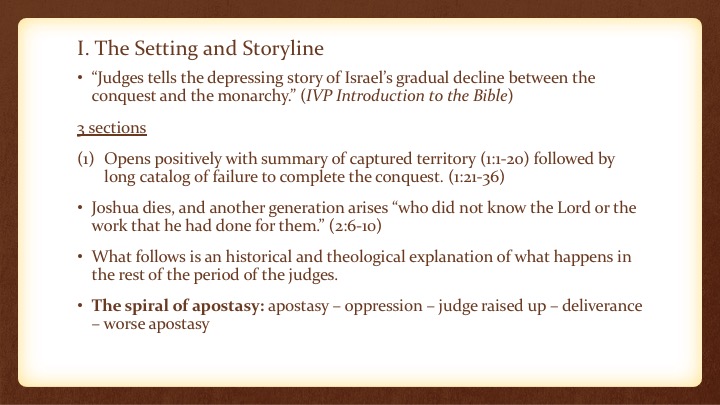 “Judges tells the depressing story of Israel’s gradual decline between the conquest and the monarchy.” (IVP Introduction to the Bible)

(1) Opens positively with summary of captured territory (1:1-20) followed by long catalog of failure to complete the conquest. (1:21-36)

Joshua dies, and another generation arises “who did not know the Lord or the work that he had done for them.” (2:6-10)

What follows is an historical and theological explanation of what happens in the rest of the period of the judges. 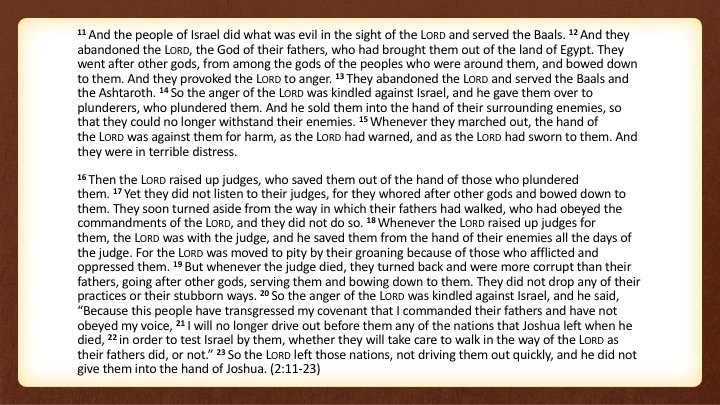 11 And the people of Israel did what was evil in the sight of the Lord and served the Baals. 12 And they abandoned the Lord, the God of their fathers, who had brought them out of the land of Egypt. They went after other gods, from among the gods of the peoples who were around them, and bowed down to them. And they provoked the Lord to anger. 13 They abandoned the Lord and served the Baals and the Ashtaroth. 14 So the anger of the Lord was kindled against Israel, and he gave them over to plunderers, who plundered them. And he sold them into the hand of their surrounding enemies, so that they could no longer withstand their enemies. 15 Whenever they marched out, the hand of the Lord was against them for harm, as the Lord had warned, and as the Lord had sworn to them. And they were in terrible distress.

16 Then the Lord raised up judges, who saved them out of the hand of those who plundered them. 17 Yet they did not listen to their judges, for they whored after other gods and bowed down to them. They soon turned aside from the way in which their fathers had walked, who had obeyed the commandments of the Lord, and they did not do so. 18 Whenever the Lord raised up judges for them, the Lord was with the judge, and he saved them from the hand of their enemies all the days of the judge. For the Lord was moved to pity by their groaning because of those who afflicted and oppressed them. 19 But whenever the judge died, they turned back and were more corrupt than their fathers, going after other gods, serving them and bowing down to them. They did not drop any of their practices or their stubborn ways. 20 So the anger of the Lord was kindled against Israel, and he said, “Because this people have transgressed my covenant that I commanded their fathers and have not obeyed my voice, 21 I will no longer drive out before them any of the nations that Joshua left when he died, 22 in order to test Israel by them, whether they will take care to walk in the way of the Lord as their fathers did, or not.” 23 So the Lord left those nations, not driving them out quickly, and he did not give them into the hand of Joshua. (2:11-23) 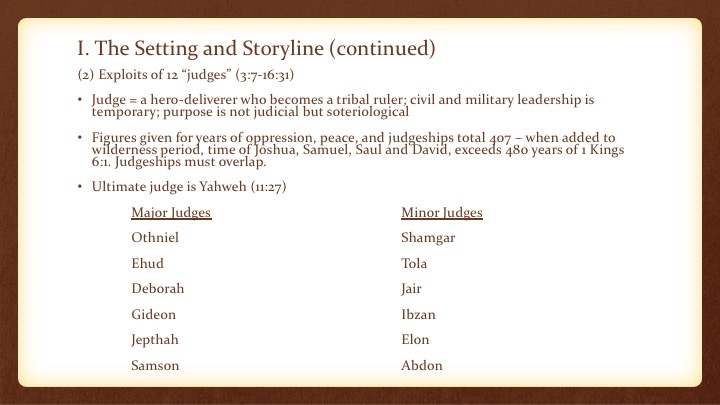 Judge = a hero-deliverer who becomes a tribal ruler; civil and military leadership is temporary; purpose is not judicial but soteriological

Figures given for years of oppression, peace, and judgeships total 407 – when added to wilderness period, time of Joshua, Samuel, Saul and David, exceeds 480 years of 1 Kings 6:1. Judgeships must overlap. 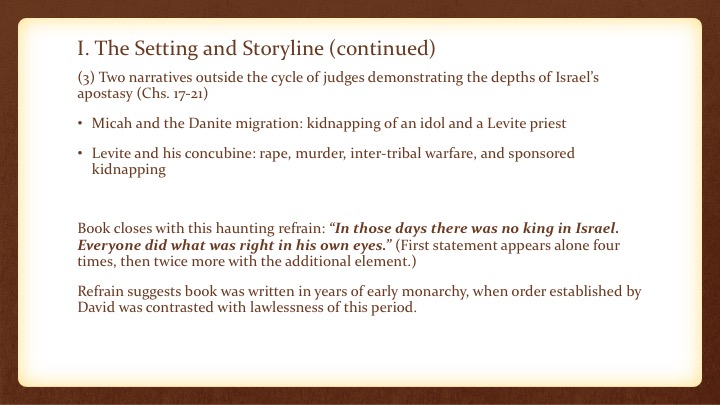 (3) Two narratives outside the cycle of judges demonstrating the depths of Israel’s apostasy (Chs. 17-21)

Micah and the Danite migration: kidnapping of an idol and a Levite priest

Book closes with this haunting refrain: “In those days there was no king in Israel. Everyone did what was right in his own eyes.” (First statement appears alone four times, then twice more with the additional element.)

Refrain suggests book was written in years of early monarchy, when order established by David was contrasted with lawlessness of this period. 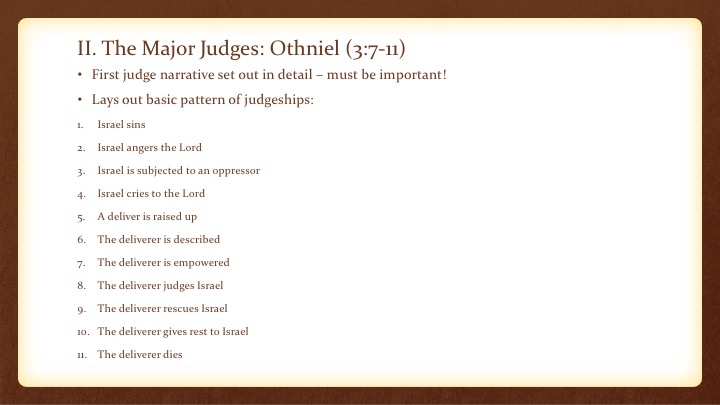 First judge narrative set out in detail – must be important!

Lays out basic pattern of judgeships:

3.Israel is subjected to an oppressor

4.Israel cries to the Lord

5.A deliver is raised up

6.The deliverer is described

7.The deliverer is empowered

10.The deliverer gives rest to Israel 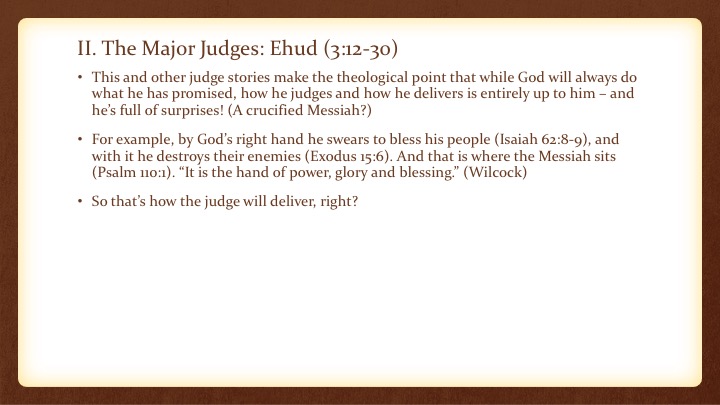 This and other judge stories make the theological point that while God will always do what he has promised, how he judges and how he delivers is entirely up to him – and he’s full of surprises! (A crucified Messiah?)

So that’s how the judge will deliver, right? 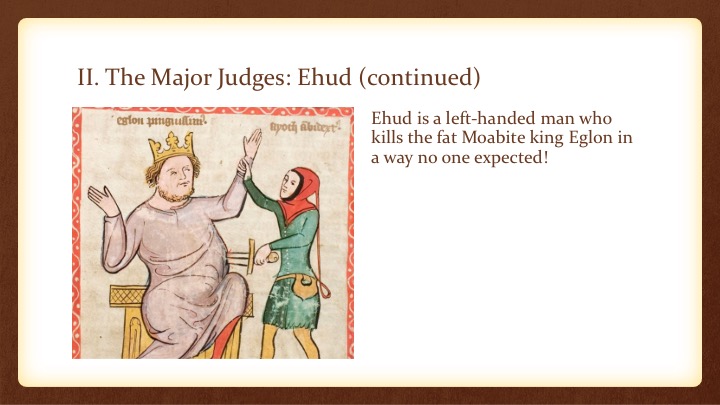 Ehud is a left-handed man who kills the fat Moabite king Eglon in a way no one expected! 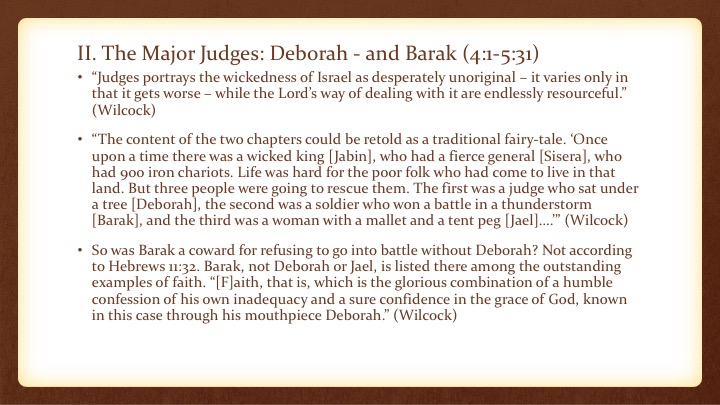 “Judges portrays the wickedness of Israel as desperately unoriginal – it varies only in that it gets worse – while the Lord’s way of dealing with it are endlessly resourceful.” (Wilcock)

“The content of the two chapters could be retold as a traditional fairy-tale. ‘Once upon a time there was a wicked king [Jabin], who had a fierce general [Sisera], who had 900 iron chariots. Life was hard for the poor folk who had come to live in that land. But three people were going to rescue them. The first was a judge who sat under a tree [Deborah], the second was a soldier who won a battle in a thunderstorm [Barak], and the third was a woman with a mallet and a tent peg [Jael]….’” (Wilcock)

So was Barak a coward for refusing to go into battle without Deborah? Not according to Hebrews 11:32. Barak, not Deborah or Jael, is listed there among the outstanding examples of faith. “[F]aith, that is, which is the glorious combination of a humble confession of his own inadequacy and a sure confidence in the grace of God, known in this case through his mouthpiece Deborah.” (Wilcock) 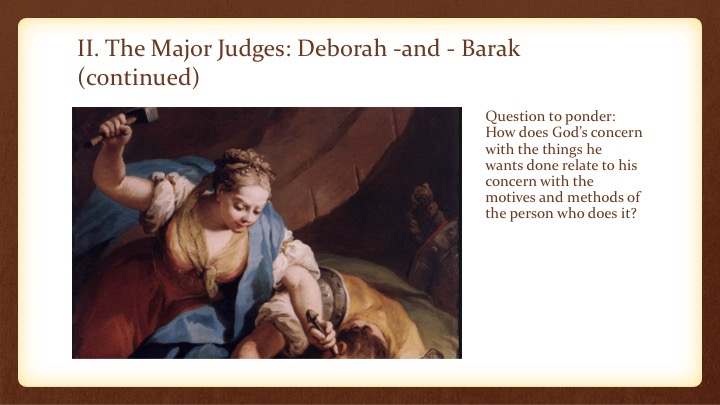 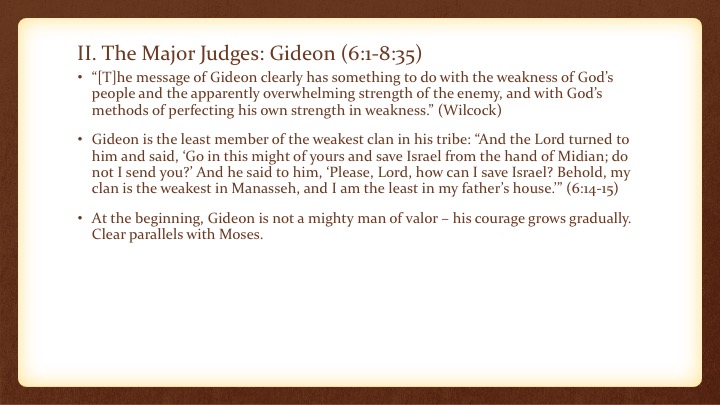 “[T]he message of Gideon clearly has something to do with the weakness of God’s people and the apparently overwhelming strength of the enemy, and with God’s methods of perfecting his own strength in weakness.” (Wilcock)

Gideon is the least member of the weakest clan in his tribe: “And the Lord turned to him and said, ‘Go in this might of yours and save Israel from the hand of Midian; do not I send you?’ And he said to him, ‘Please, Lord, how can I save Israel? Behold, my clan is the weakest in Manasseh, and I am the least in my father’s house.’” (6:14-15)

At the beginning, Gideon is not a mighty man of valor – his courage grows gradually. Clear parallels with Moses. 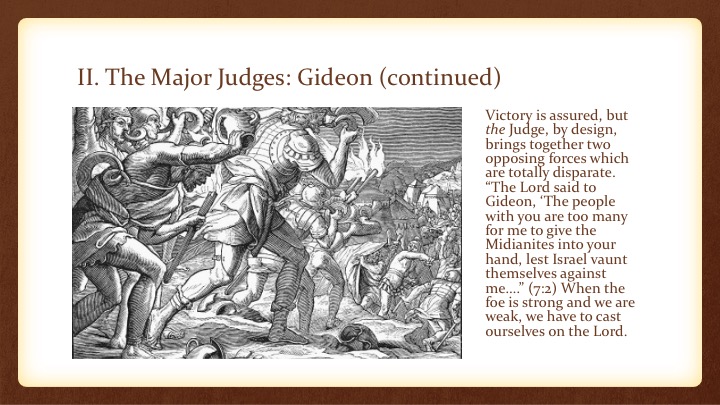 Victory is assured, but the Judge, by design, brings together two opposing forces which are totally disparate. “The Lord said to Gideon, ‘The people with you are too many for me to give the Midianites into your hand, lest Israel vaunt themselves against me….” (7:2) When the foe is strong and we are weak, we have to cast ourselves on the Lord. 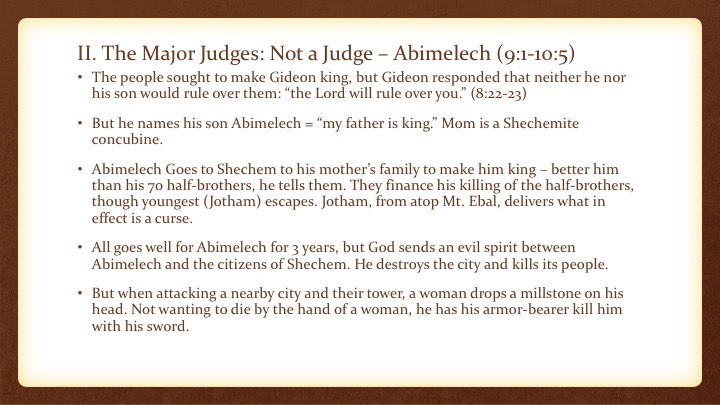 The people sought to make Gideon king, but Gideon responded that neither he nor his son would rule over them: “the Lord will rule over you.” (8:22-23)

But he names his son Abimelech = “my father is king.” Mom is a Shechemite concubine.

Abimelech Goes to Shechem to his mother’s family to make him king – better him than his 70 half-brothers, he tells them. They finance his killing of the half-brothers, though youngest (Jotham) escapes. Jotham, from atop Mt. Ebal, delivers what in effect is a curse.

All goes well for Abimelech for 3 years, but God sends an evil spirit between Abimelech and the citizens of Shechem. He destroys the city and kills its people.

But when attacking a nearby city and their tower, a woman drops a millstone on his head. Not wanting to die by the hand of a woman, he has his armor-bearer kill him with his sword. 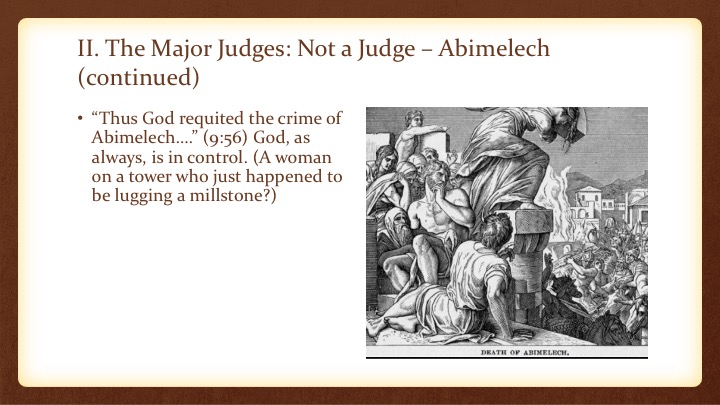 II. The Major Judges: Not a Judge – Abimelech (continued)

“Thus God requited the crime of Abimelech….” (9:56) God, as always, is in control. (A woman on a tower who just happened to be lugging a millstone?) 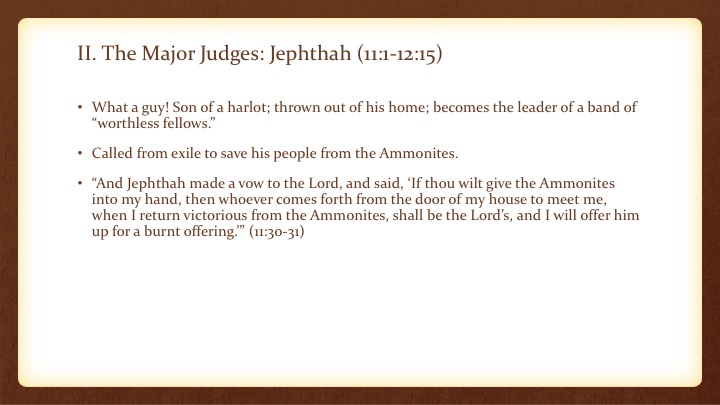 What a guy! Son of a harlot; thrown out of his home; becomes the leader of a band of “worthless fellows.”

Called from exile to save his people from the Ammonites.

“And Jephthah made a vow to the Lord, and said, ‘If thou wilt give the Ammonites into my hand, then whoever comes forth from the door of my house to meet me, when I return victorious from the Ammonites, shall be the Lord’s, and I will offer him up for a burnt offering.’” (11:30-31) 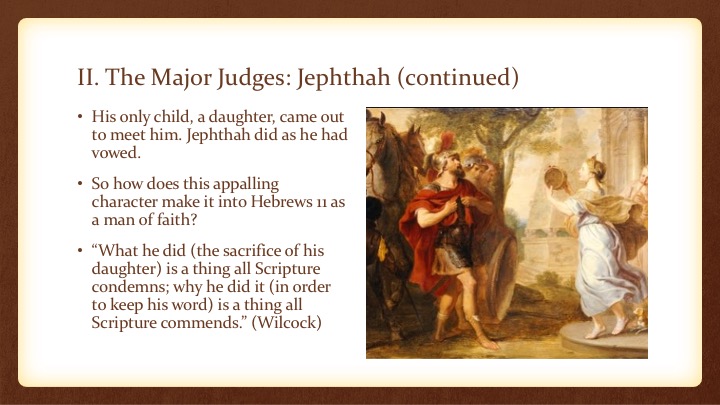 His only child, a daughter, came out to meet him. Jephthah did as he had vowed.

So how does this appalling character make it into Hebrews 11 as a man of faith? 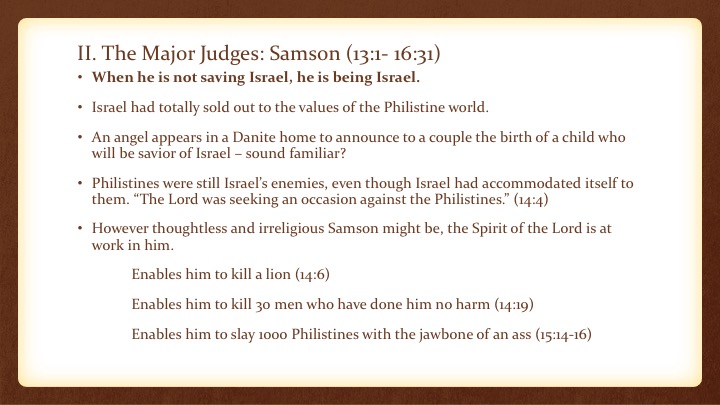 When he is not saving Israel, he is being Israel.

Israel had totally sold out to the values of the Philistine world.

An angel appears in a Danite home to announce to a couple the birth of a child who will be savior of Israel – sound familiar?

Philistines were still Israel’s enemies, even though Israel had accommodated itself to them. “The Lord was seeking an occasion against the Philistines.” (14:4)

However thoughtless and irreligious Samson might be, the Spirit of the Lord is at work in him. 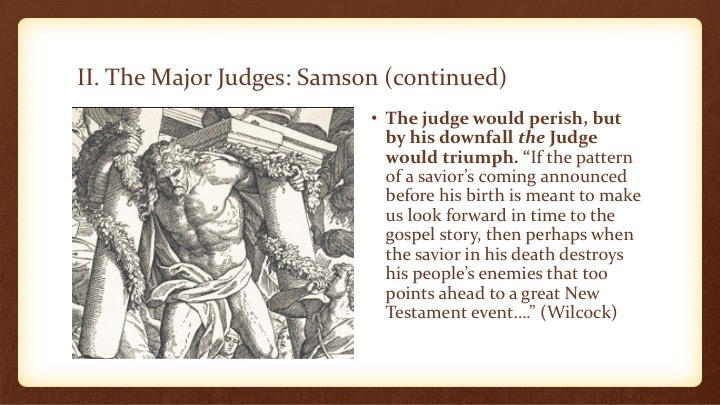 The judge would perish, but by his downfall the Judge would triumph. “If the pattern of a savior’s coming announced before his birth is meant to make us look forward in time to the gospel story, then perhaps when the savior in his death destroys his people’s enemies that too points ahead to a great New Testament event….” (Wilcock) 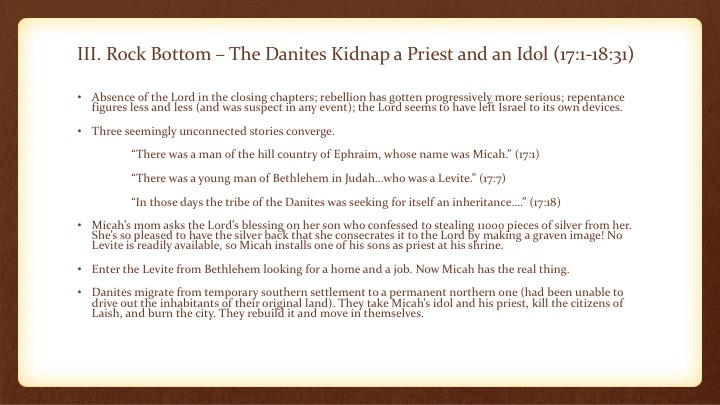 Absence of the Lord in the closing chapters; rebellion has gotten progressively more serious; repentance figures less and less (and was suspect in any event); the Lord seems to have left Israel to its own devices.

“In those days the tribe of the Danites was seeking for itself an inheritance….” (17:18)

Micah’s mom asks the Lord’s blessing on her son who confessed to stealing 11000 pieces of silver from her. She’s so pleased to have the silver back that she consecrates it to the Lord by making a graven image! No Levite is readily available, so Micah installs one of his sons as priest at his shrine.

Enter the Levite from Bethlehem looking for a home and a job. Now Micah has the real thing.

Danites migrate from temporary southern settlement to a permanent northern one (had been unable to drive out the inhabitants of their original land). They take Micah’s idol and his priest, kill the citizens of Laish, and burn the city. They rebuild it and move in themselves. 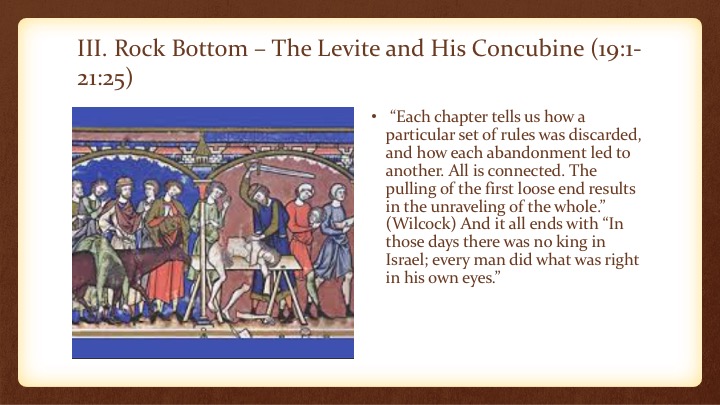 “Each chapter tells us how a particular set of rules was discarded, and how each abandonment led to another. All is connected. The pulling of the first loose end results in the unraveling of the whole.” (Wilcock) And it all ends with “In those days there was no king in Israel; every man did what was right in his own eyes.” 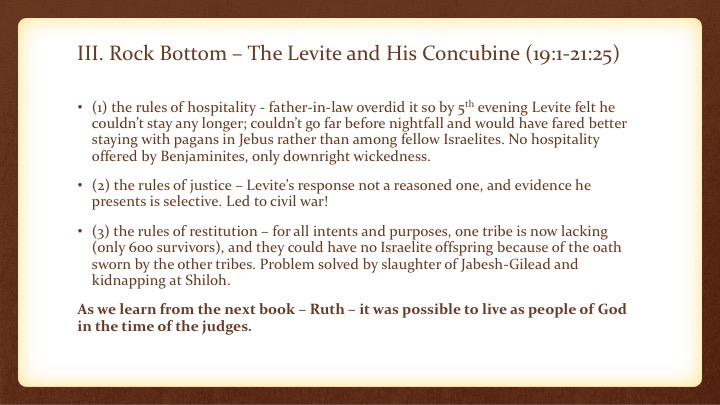 (1) the rules of hospitality - father-in-law overdid it so by 5th evening Levite felt he couldn’t stay any longer; couldn’t go far before nightfall and would have fared better staying with pagans in Jebus rather than among fellow Israelites. No hospitality offered by Benjaminites, only downright wickedness.

(2) the rules of justice – Levite’s response not a reasoned one, and evidence he presents is selective. Led to civil war!

(3) the rules of restitution – for all intents and purposes, one tribe is now lacking (only 600 survivors), and they could have no Israelite offspring because of the oath sworn by the other tribes. Problem solved by slaughter of Jabesh-Gilead and kidnapping at Shiloh.

As we learn from the next book – Ruth – it was possible to live as people of God in the time of the judges.