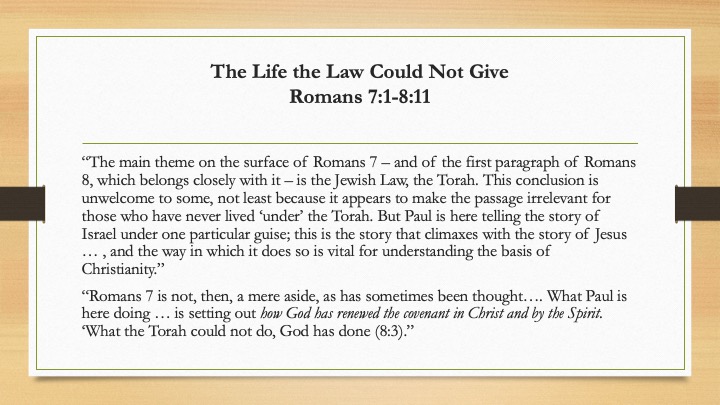 “The main theme on the surface of Romans 7 – and of the first paragraph of Romans 8, which belongs closely with it – is the Jewish Law, the Torah. This conclusion is unwelcome to some, not least because it appears to make the passage irrelevant for those who have never lived ‘under’ the Torah. But Paul is here telling the story of Israel under one particular guise; this is the story that climaxes with the story of Jesus … , and the way in which it does so is vital for understanding the basis of Christianity.”

“Romans 7 is not, then, a mere aside, as has sometimes been thought…. What Paul is here doing … is setting out how God has renewed the covenant in Christ and by the Spirit. ‘What the Torah could not do, God has done (8:3).” 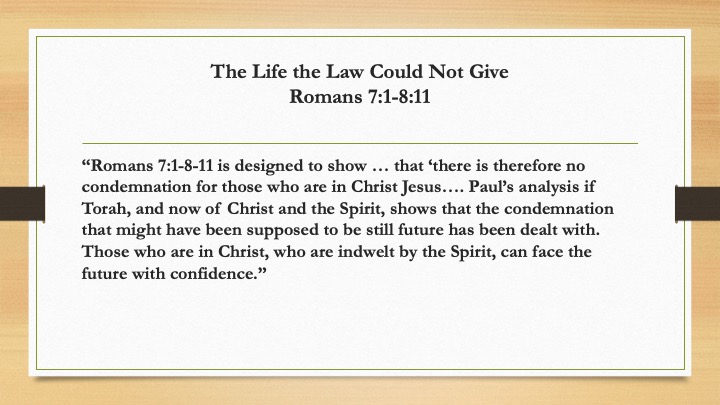 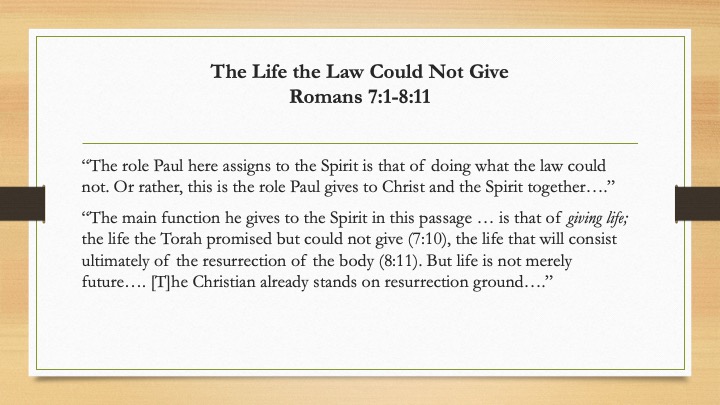 “The role Paul here assigns to the Spirit is that of doing what the law could not. Or rather, this is the role Paul gives to Christ and the Spirit together….”

“The main function he gives to the Spirit in this passage … is that of giving life; the life the Torah promised but could not give (7:10), the life that will consist ultimately of the resurrection of the body (8:11). But life is not merely future…. [T]he Christian already stands on resurrection ground….” 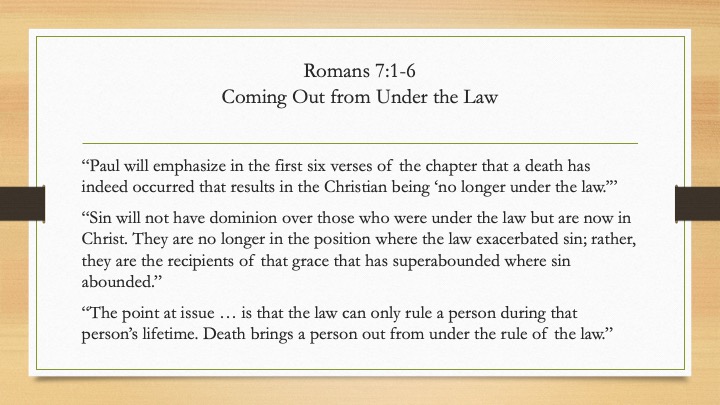 Romans 7:1-6
Coming Out from Under the Law

“Paul will emphasize in the first six verses of the chapter that a death has indeed occurred that results in the Christian being ‘no longer under the law.’”

“Sin will not have dominion over those who were under the law but are now in Christ. They are no longer in the position where the law exacerbated sin; rather, they are the recipients of that grace that has superabounded where sin abounded.”

“The point at issue … is that the law can only rule a person during that person’s lifetime. Death brings a person out from under the rule of the law.” 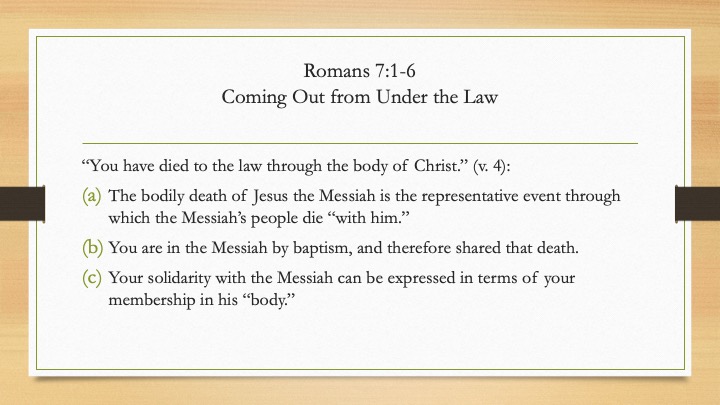 Romans 7:1-6
Coming Out from Under the Law

(a) The bodily death of Jesus the Messiah is the representative event through which the Messiah’s people die “with him.”

(b) You are in the Messiah by baptism, and therefore shared that death.

(c) Your solidarity with the Messiah can be expressed in terms of your membership in his “body.” 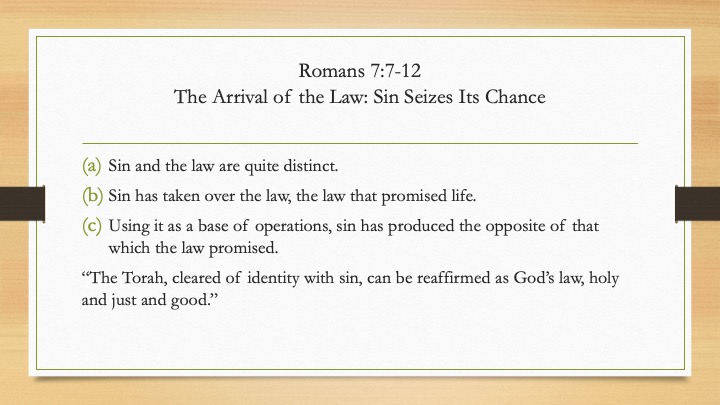 Romans 7:7-12
The Arrival of the Law: Sin Seizes Its Chance

(a) Sin and the law are quite distinct.

(b) Sin has taken over the law, the law that promised life.

(c) Using it as a base of operations, sin has produced the opposite of that which the law promised.

“The Torah, cleared of identity with sin, can be reaffirmed as God’s law, holy and just and good.” 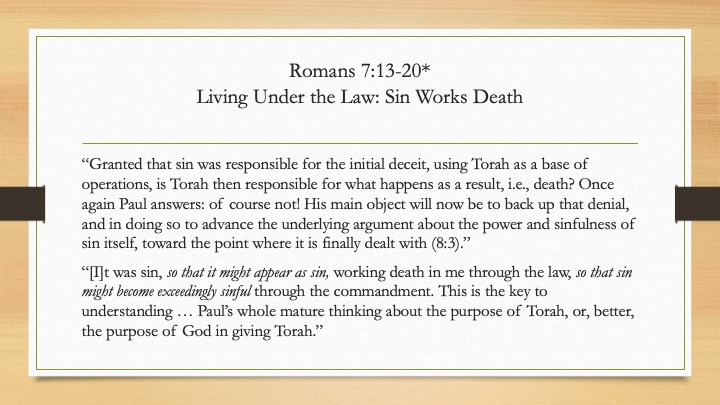 “Granted that sin was responsible for the initial deceit, using Torah as a base of operations, is Torah then responsible for what happens as a result, i.e., death? Once again Paul answers: of course not! His main object will now be to back up that denial, and in doing so to advance the underlying argument about the power and sinfulness of sin itself, toward the point where it is finally dealt with (8:3).”

“[I]t was sin, so that it might appear as sin, working death in me through the law, so that sin might become exceedingly sinful through the commandment. This is the key to understanding … Paul’s whole mature thinking about the purpose of Torah, or, better, the purpose of God in giving Torah.” 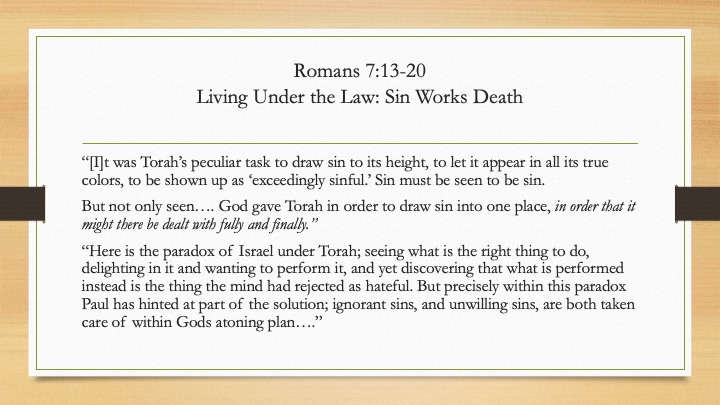 “It was Torah’s peculiar task to draw sin to its height, to let it appear in all its true colors, to be shown up as ‘exceedingly sinful.’ Sin must be seen to be sin.

But not only seen…. God gave Torah in order to draw sin into one place, in order that it might there be dealt with fully and finally.”

“Here is the paradox of Israel under Torah; seeing what is the right thing to do, delighting in it and wanting to perform it, and yet discovering that what is performed instead is the thing the mind had rejected as hateful. But precisely within this paradox Paul has hinted at part of the solution; ignorant sins, and unwilling sins, are both taken care of within Gods atoning plan….” 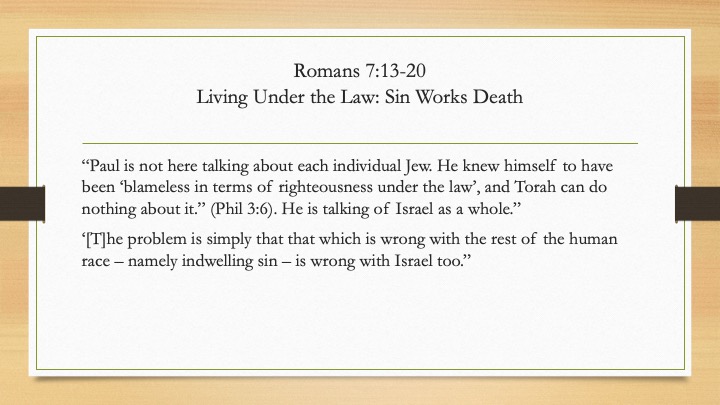 “Paul is not here talking about each individual Jew. He knew himself to have been ‘blameless in terms of righteousness under the law’, and Torah can do nothing about it.” (Phil 3:6). He is talking of Israel as a whole.”

‘[T]he problem is simply that that which is wrong with the rest of the human race – namely indwelling sin – is wrong with Israel too.” 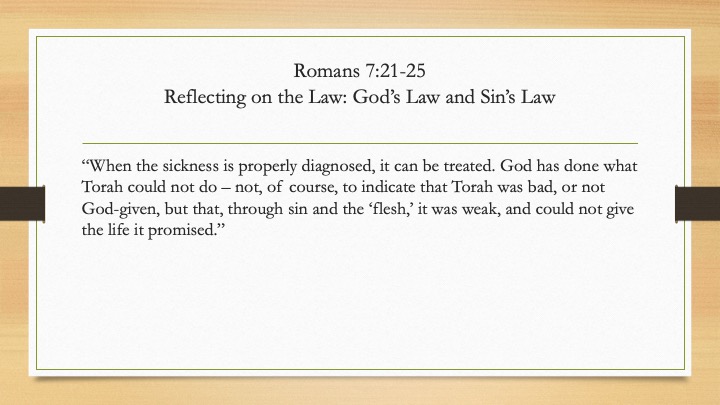 “When the sickness is properly diagnosed, it can be treated. God has done what Torah could not do – not, of course, to indicate that Torah was bad, or not God-given, but that, through sin and the ‘flesh,’ it was weak, and could not give the life it promised.” 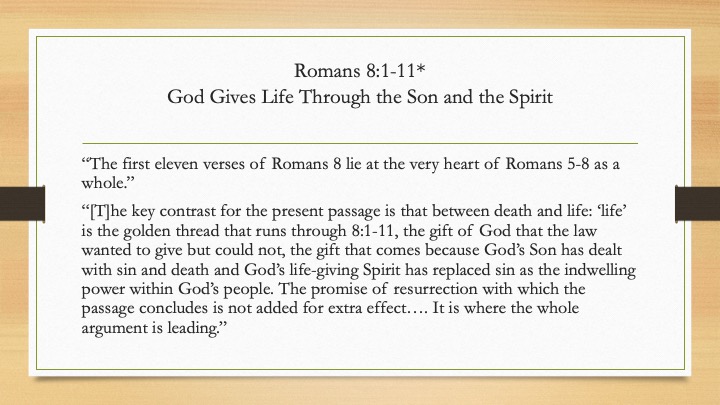 Romans 8:1-11*
God Gives Life Through the Son and the Spirit

“The first eleven verses of Romans 8 lie at the very heart of Romans 5-8 as a whole.”

“The key contrast for the present passage is that between death and life: ‘life’ is the golden thread that runs through 8:1-11, the gift of God that the law wanted to give but could not, the gift that comes because God’s Son has dealt with sin and death and God’s life-giving Spirit has replaced sin as the indwelling power within God’s people. The promise of resurrection with which the passage concludes is not added for extra effect…. It is where the whole argument is leading.” 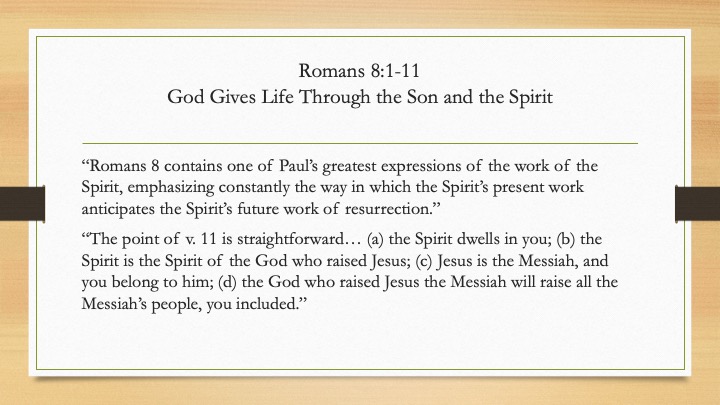 Romans 8:1-11
God Gives Life Through the Son and the Spirit

“Romans 8 contains one of Paul’s greatest expressions of the work of the Spirit, emphasizing constantly the way in which the Spirit’s present work anticipates the Spirit’s future work of resurrection.” 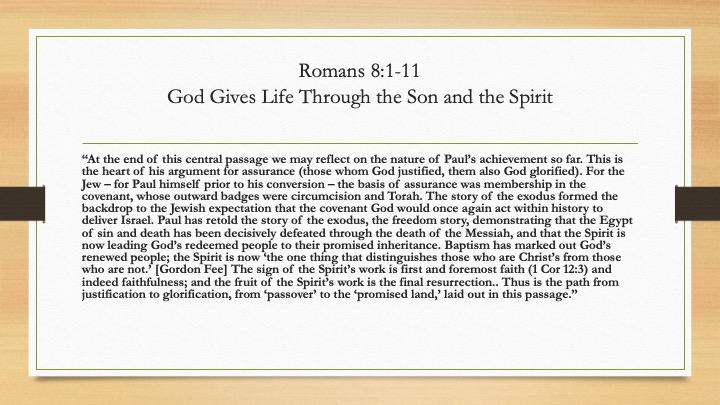 Romans 8:1-11
God Gives Life Through the Son and the Spirit

“At the end of this central passage we may reflect on the nature of Paul’s achievement so far. This is the heart of his argument for assurance (those whom God justified, them also God glorified). For the Jew – for Paul himself prior to his conversion – the basis of assurance was membership in the covenant, whose outward badges were circumcision and Torah. The story of the exodus formed the backdrop to the Jewish expectation that the covenant God would once again act within history to deliver Israel. Paul has retold the story of the exodus, the freedom story, demonstrating that the Egypt of sin and death has been decisively defeated through the death of the Messiah, and that the Spirit is now leading God’s redeemed people to their promised inheritance. Baptism has marked out God’s renewed people; the Spirit is now ‘the one thing that distinguishes those who are Christ’s from those who are not.’ [Gordon Fee] The sign of the Spirit’s work is first and foremost faith (1 Cor 12:3) and indeed faithfulness; and the fruit of the Spirit’s work is the final resurrection.. Thus is the path from justification to glorification, from ‘passover’ to the ‘promised land,’ laid out in this passage.” 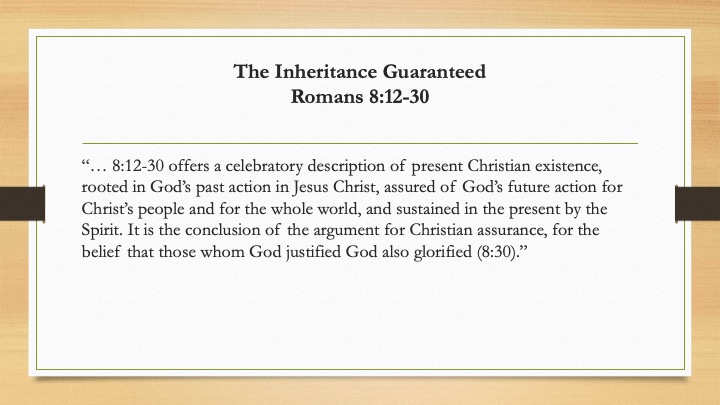 “… 8:12-30 offers a celebratory description of present Christian existence, rooted in God’s past action in Jesus Christ, assured of God’s future action for Christ’s people and for the whole world, and sustained in the present by the Spirit. It is the conclusion of the argument for Christian assurance, for the belief that those whom God justified God also glorified (8:30).” 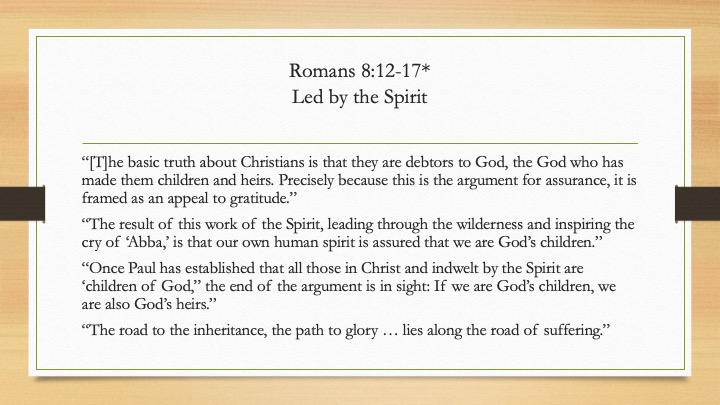 “The basic truth about Christians is that they are debtors to God, the God who has made them children and heirs. Precisely because this is the argument for assurance, it is framed as an appeal to gratitude.”

“The result of this work of the Spirit, leading through the wilderness and inspiring the cry of ‘Abba,’ is that our own human spirit is assured that we are God’s children.”

“Once Paul has established that all those in Christ and indwelt by the Spirit are ‘children of God,” the end of the argument is in sight: If we are God’s children, we are also God’s heirs.”

“The road to the inheritance, the path to glory … lies along the road of suffering.” 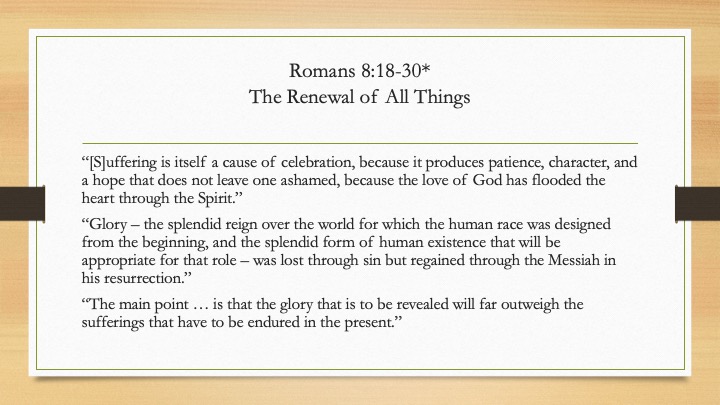 “Suffering is itself a cause of celebration, because it produces patience, character, and a hope that does not leave one ashamed, because the love of God has flooded the heart through the Spirit.”

“Glory – the splendid reign over the world for which the human race was designed from the beginning, and the splendid form of human existence that will be appropriate for that role – was lost through sin but regained through the Messiah in his resurrection.”

“The main point … is that the glory that is to be revealed will far outweigh the sufferings that have to be endured in the present.” 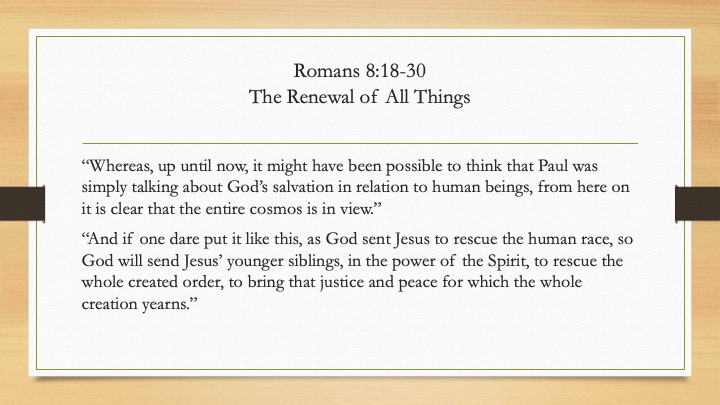 “Whereas, up until now, it might have been possible to think that Paul was simply talking about God’s salvation in relation to human beings, from here on it is clear that the entire cosmos is in view.” 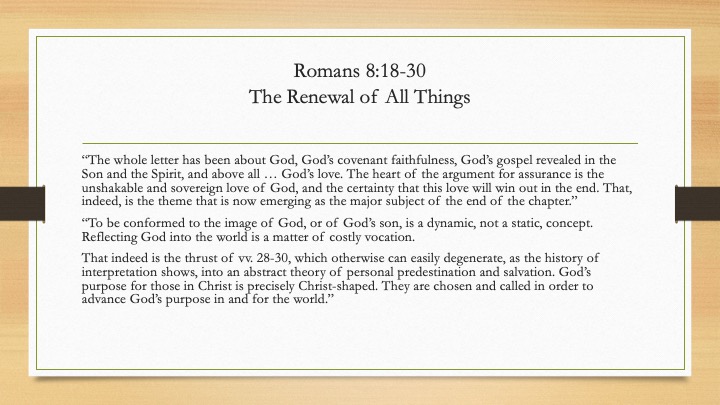 “The whole letter has been about God, God’s covenant faithfulness, God’s gospel revealed in the Son and the Spirit, and above all … God’s love. The heart of the argument for assurance is the unshakable and sovereign love of God, and the certainty that this love will win out in the end. That, indeed, is the theme that is now emerging as the major subject of the end of the chapter.”

“To be conformed to the image of God, or of God’s son, is a dynamic, not a static, concept. Reflecting God into the world is a matter of costly vocation.

That indeed is the thrust of vv. 28-30, which otherwise can easily degenerate, as the history of interpretation shows, into an abstract theory of personal predestination and salvation. God’s purpose for those in Christ is precisely Christ-shaped. They are chosen and called in order to advance God’s purpose in and for the world.” 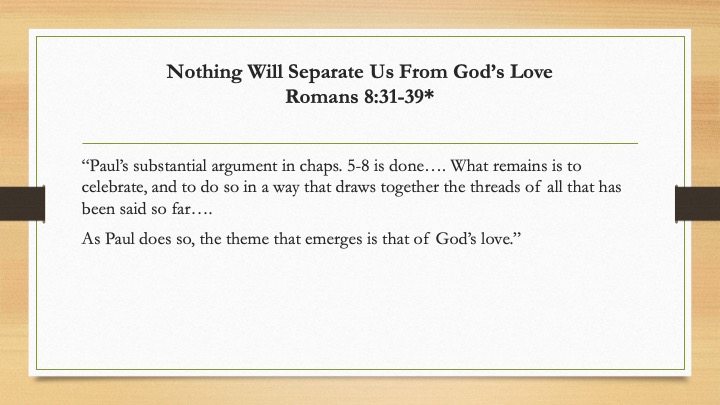 “Paul’s substantial argument in chaps. 5-8 is done…. What remains is to celebrate, and to do so in a way that draws together the threads of all that has been said so far….

As Paul does so, the theme that emerges is that of God’s love.”