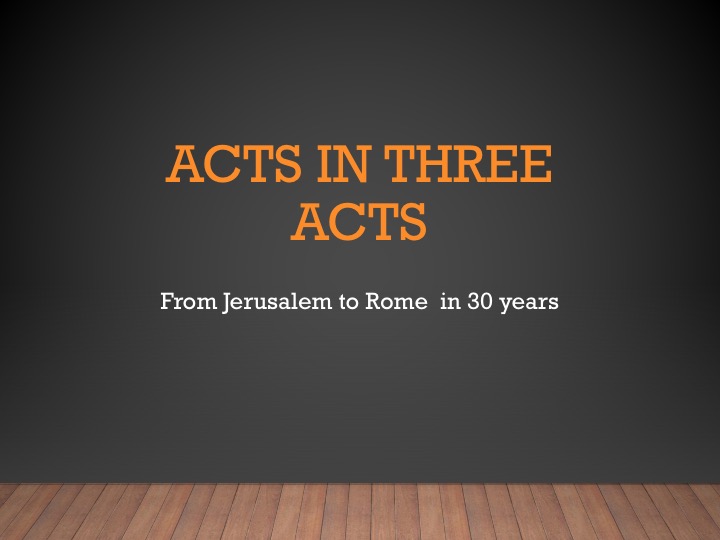 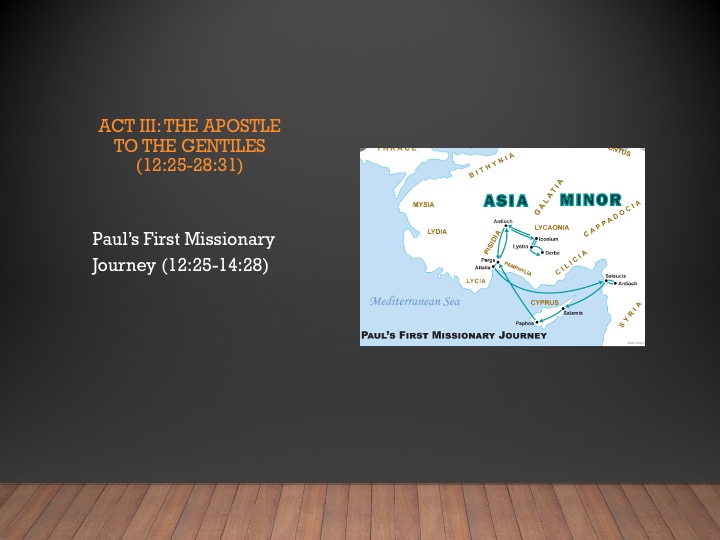 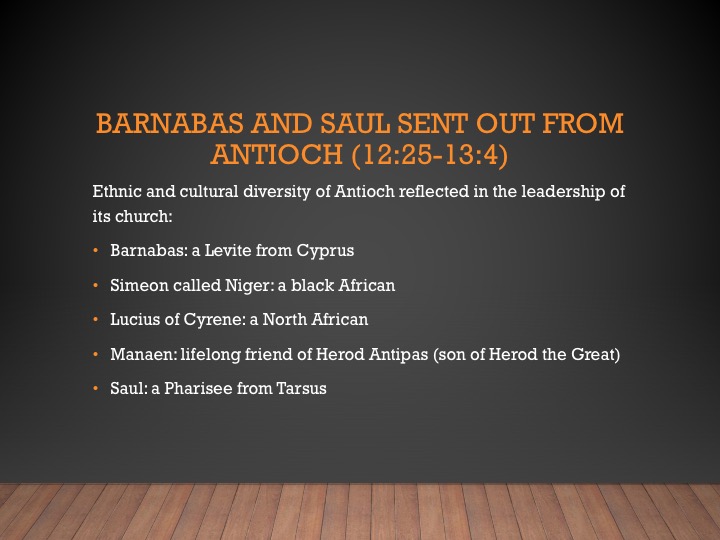 Ethnic and cultural diversity of Antioch reflected in the leadership of its church: 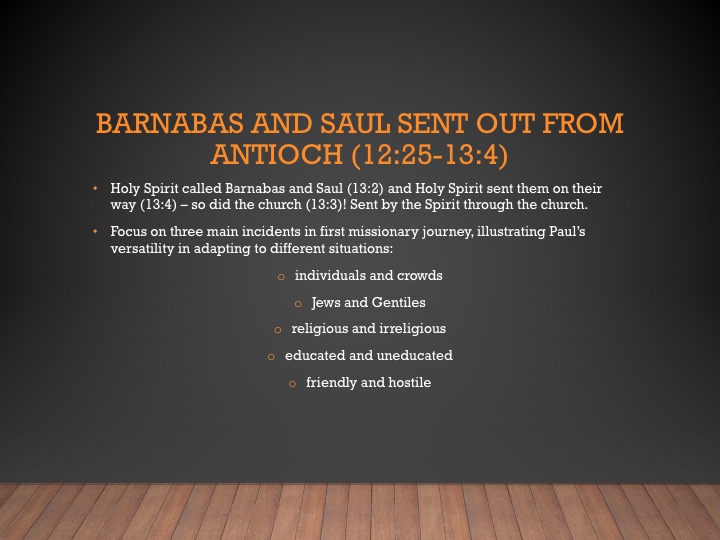 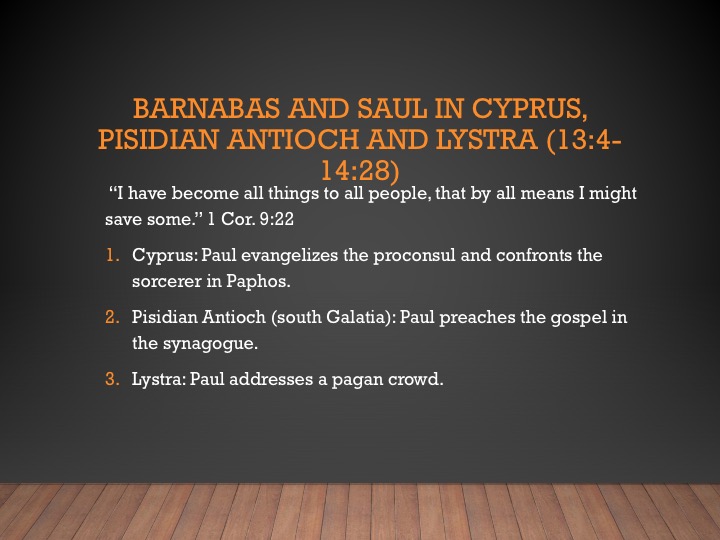 1. Cyprus: Paul evangelizes the proconsul and confronts the sorcerer in Paphos. 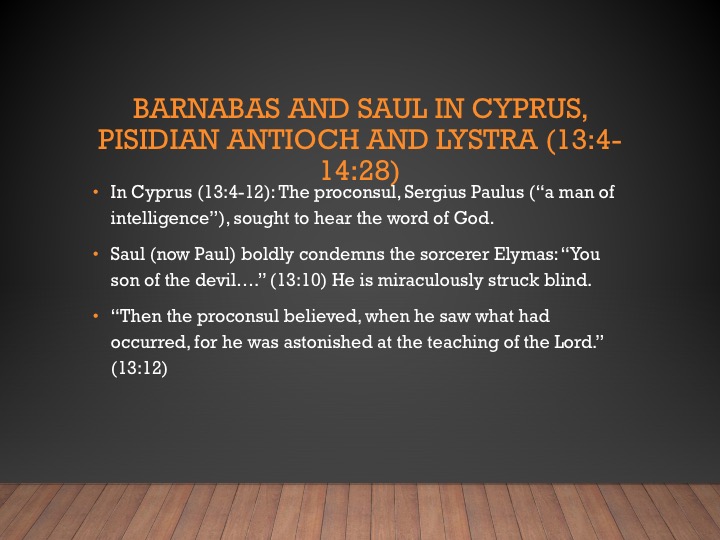 Saul (now Paul) boldly condemns the sorcerer Elymas: “You son of the devil….” (13:10) He is miraculously struck blind.

“Then the proconsul believed, when he saw what had occurred, for he was astonished at the teaching of the Lord.” (13:12) 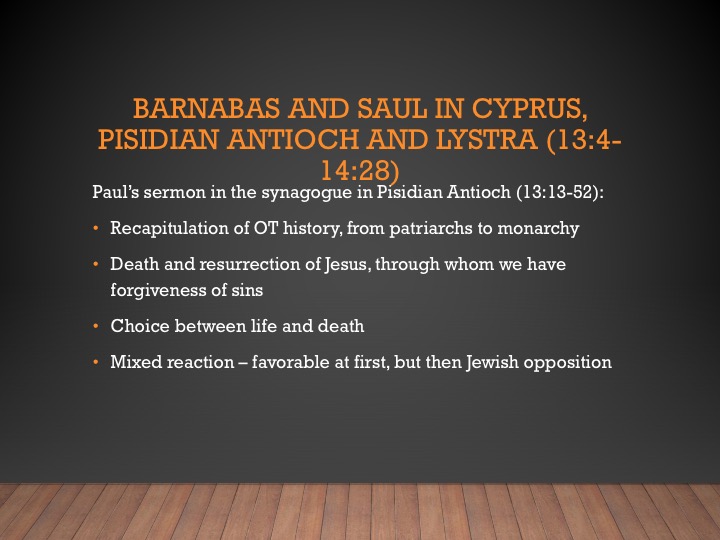 Recapitulation of OT history, from patriarchs to monarchy

Death and resurrection of Jesus, through whom we have forgiveness of sins

Choice between life and death

Mixed reaction – favorable at first, but then Jewish opposition

Came to Lystra after fleeing Iconium, where people were deeply divided by Paul’s message.

Crowd attempts to worship Barnabas (Zeus) and Paul (Hermes) as gods after healing a man crippled from birth.

In Paul’s “only recorded address to illiterate pagans” (Stott), he did not focus on OT (scripture they did not know), but on God who made natural world around them. 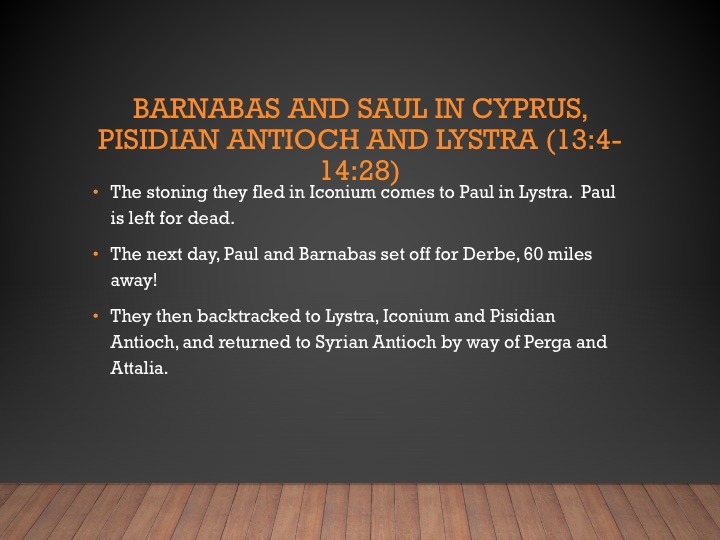 The stoning they fled in Iconium comes to Paul in Lystra.  Paul is left for dead.

The next day, Paul and Barnabas set off for Derbe, 60 miles away!

They then backtracked to Lystra, Iconium and Pisidian Antioch, and returned to Syrian Antioch by way of Perga and Attalia. 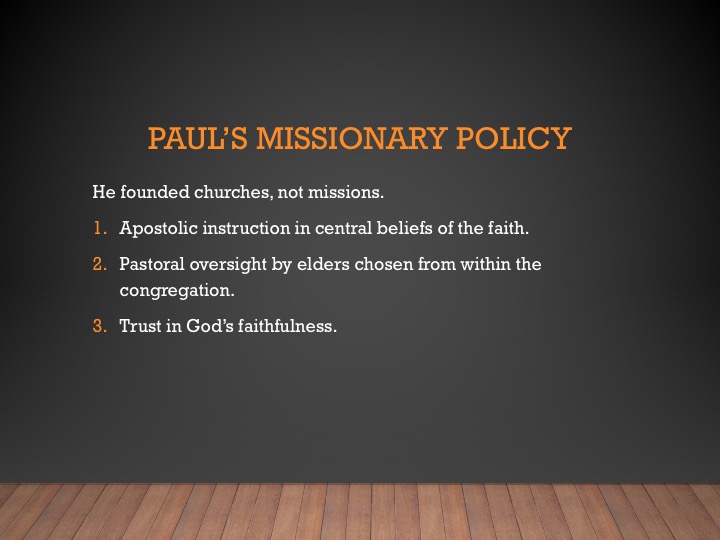 He founded churches, not missions.

1. Apostolic instruction in central beliefs of the faith.

2. Pastoral oversight by elders chosen from within the congregation. 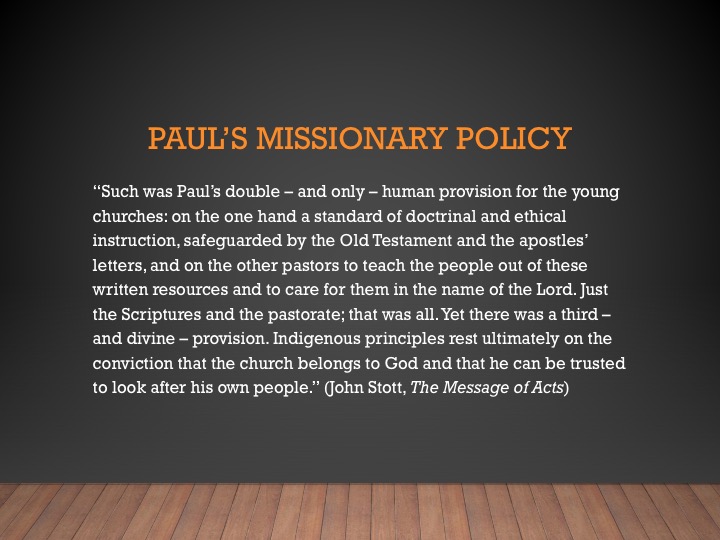 “Such was Paul’s double – and only – human provision for the young churches: on the one hand a standard of doctrinal and ethical instruction, safeguarded by the Old Testament and the apostles’ letters, and on the other pastors to teach the people out of these written resources and to care for them in the name of the Lord. Just the Scriptures and the pastorate; that was all. Yet there was a third – and divine – provision. Indigenous principles rest ultimately on the conviction that the church belongs to God and that he can be trusted to look after his own people.” (John Stott, The Message of Acts) 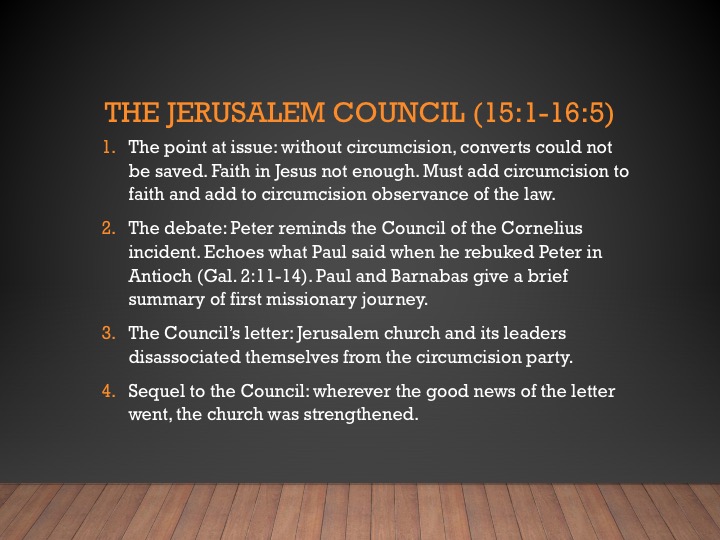 1.The point at issue: without circumcision, converts could not be saved. Faith in Jesus not enough. Must add circumcision to faith and add to circumcision observance of the law.

2.The debate: Peter reminds the Council of the Cornelius incident. Echoes what Paul said when he rebuked Peter in Antioch (Gal. 2:11-14). Paul and Barnabas give a brief summary of first missionary journey.

3.The Council’s letter: Jerusalem church and its leaders disassociated themselves from the circumcision party.

4.Sequel to the Council: wherever the good news of the letter went, the church was strengthened. 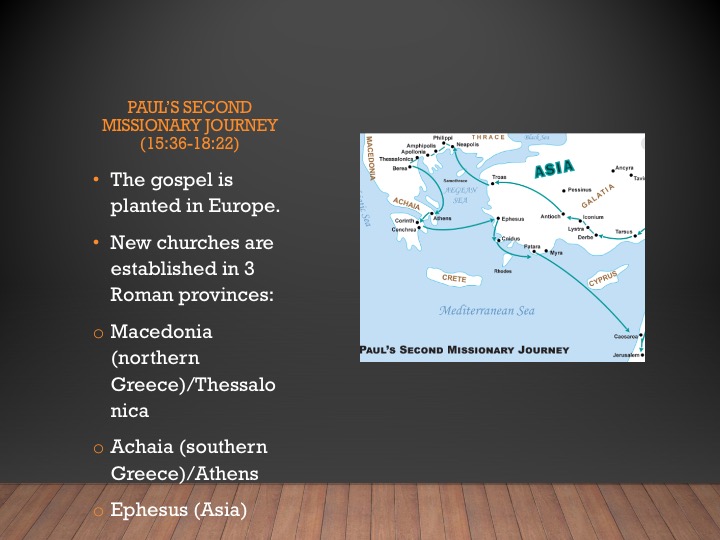 The gospel is planted in Europe. 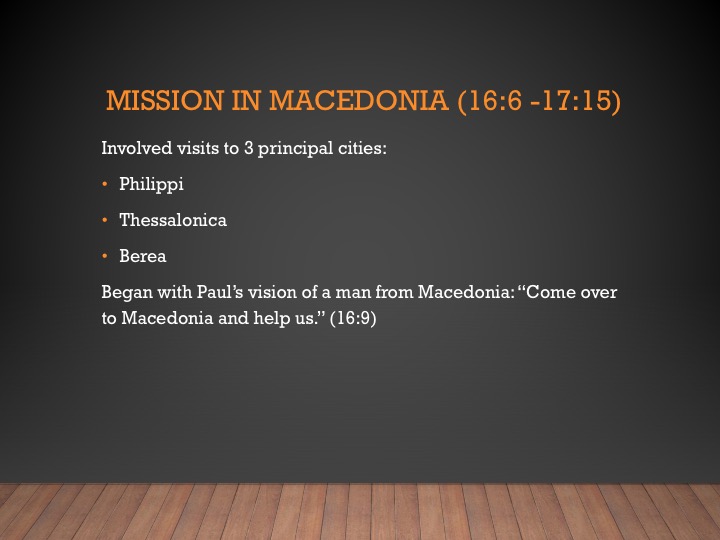 Began with Paul’s vision of a man from Macedonia: “Come over to Macedonia and help us.” (16:9) 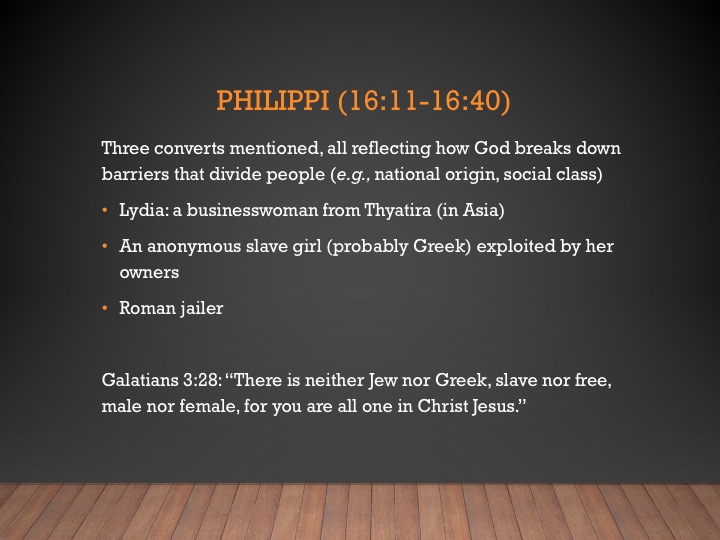 Lydia: a businesswoman from Thyatira (in Asia)

An anonymous slave girl (probably Greek) exploited by her owners

Galatians 3:28: “There is neither Jew nor Greek, slave nor free, male nor female, for you are all one in Christ Jesus.” 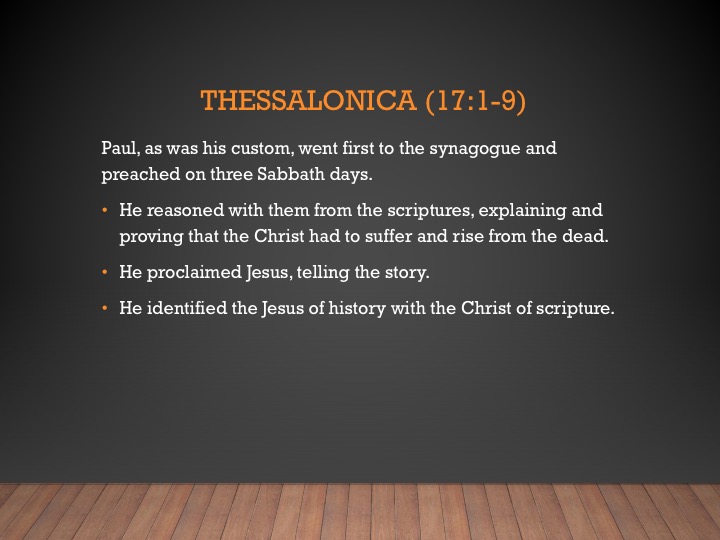 Paul, as was his custom, went first to the synagogue and preached on three Sabbath days.

He reasoned with them from the scriptures, explaining and proving that the Christ had to suffer and rise from the dead.

He proclaimed Jesus, telling the story.

He identified the Jesus of history with the Christ of scripture. 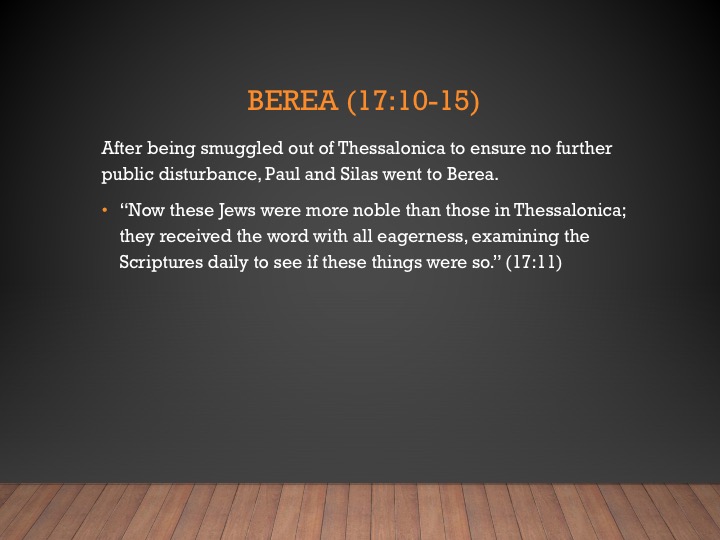 After being smuggled out of Thessalonica to ensure no further public disturbance, Paul and Silas went to Berea.

“Now these Jews were more noble than those in Thessalonica; they received the word with all eagerness, examining the Scriptures daily to see if these things were so.” (17:11) 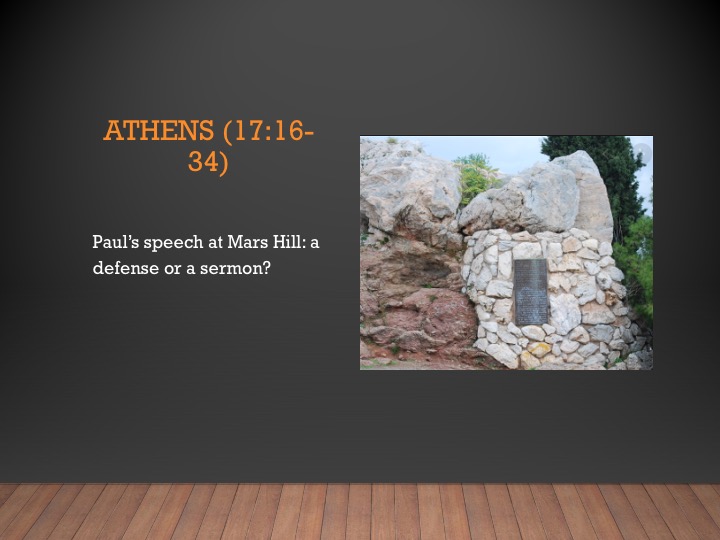 Paul’s speech at Mars Hill: a defense or a sermon? 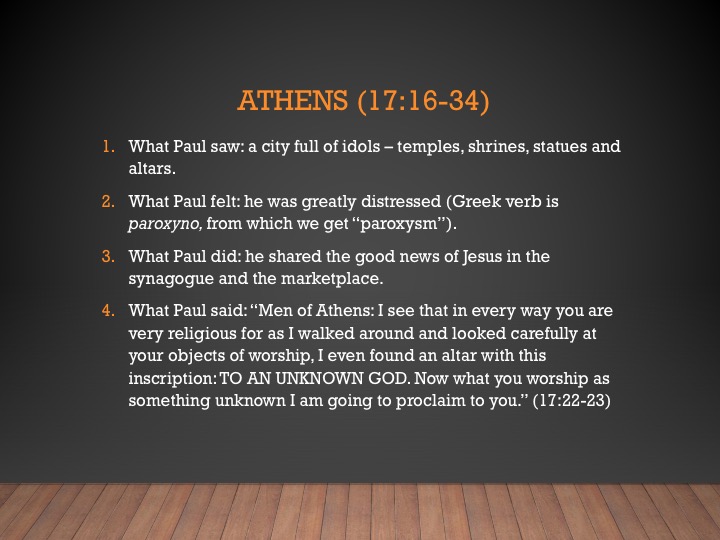 1.What Paul saw: a city full of idols – temples, shrines, statues and altars.

2.What Paul felt: he was greatly distressed (Greek verb is paroxyno, from which we get “paroxysm”).

3.What Paul did: he shared the good news of Jesus in the synagogue and the marketplace.

4.What Paul said: “Men of Athens: I see that in every way you are very religious for as I walked around and looked carefully at your objects of worship, I even found an altar with this inscription: TO AN UNKNOWN GOD. Now what you worship as something unknown I am going to proclaim to you.” (17:22-23) 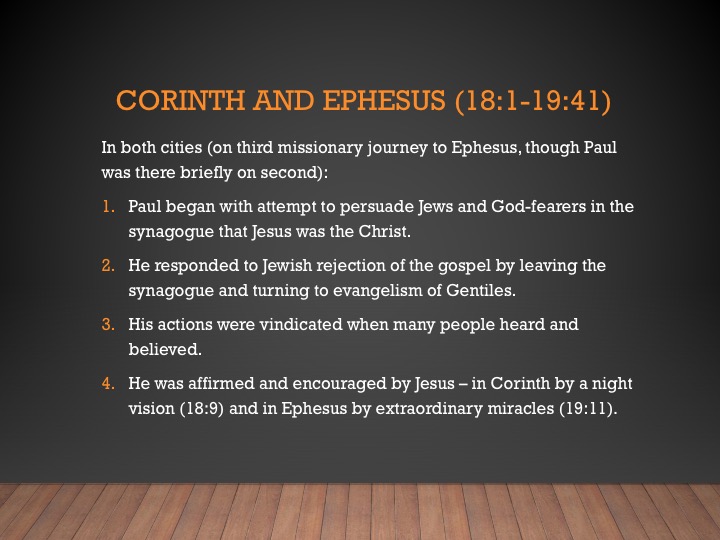 In both cities (on third missionary journey to Ephesus, though Paul was there briefly on second):

1.Paul began with attempt to persuade Jews and God-fearers in the synagogue that Jesus was the Christ.

2.He responded to Jewish rejection of the gospel by leaving the synagogue and turning to evangelism of Gentiles.

3.His actions were vindicated when many people heard and believed.

4.He was affirmed and encouraged by Jesus – in Corinth by a night vision (18:9) and in Ephesus by extraordinary miracles (19:11). 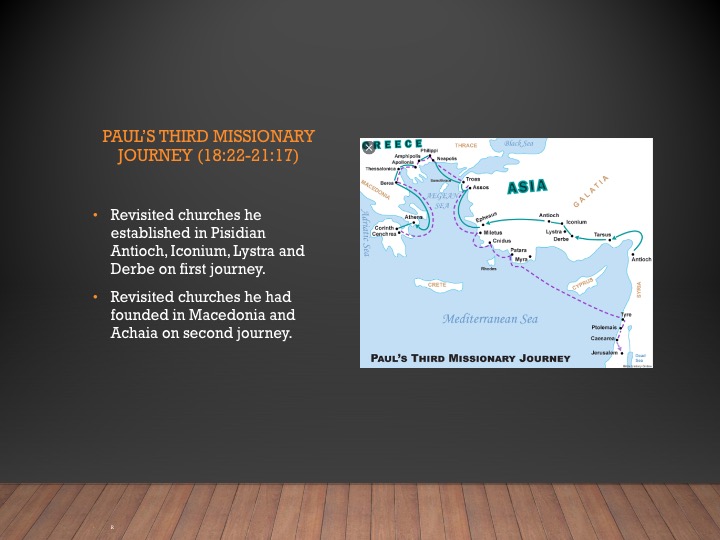 Revisited churches he had founded in Macedonia and Achaia on second journey. 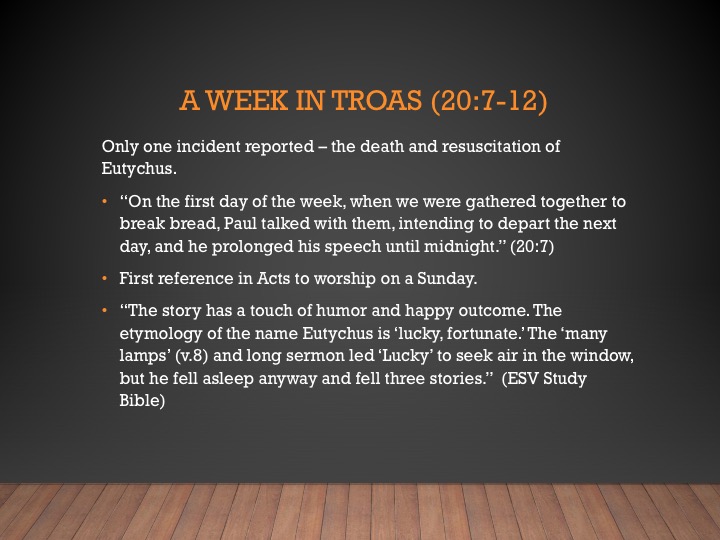 Only one incident reported – the death and resuscitation of Eutychus.

“On the first day of the week, when we were gathered together to break bread, Paul talked with them, intending to depart the next day, and he prolonged his speech until midnight.” (20:7)

First reference in Acts to worship on a Sunday.

“The story has a touch of humor and happy outcome. The etymology of the name Eutychus is ‘lucky, fortunate.’ The ‘many lamps’ (v.8) and long sermon led ‘Lucky’ to seek air in the window, but he fell asleep anyway and fell three stories.”  (ESV Study Bible) 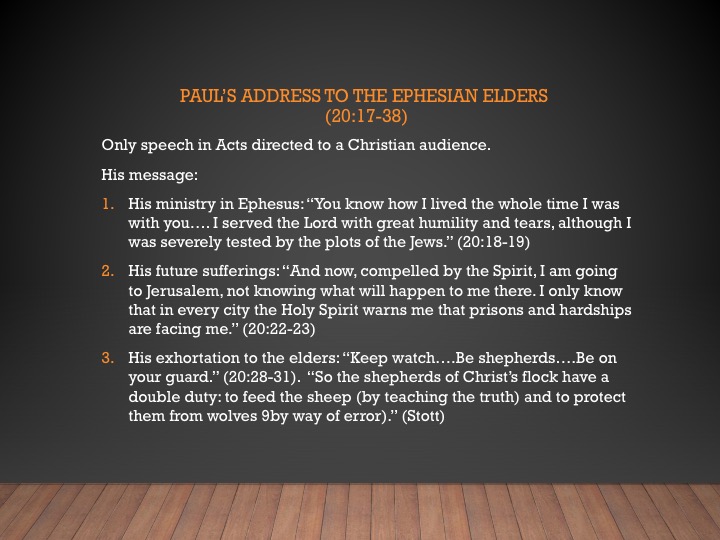 Only speech in Acts directed to a Christian audience.

1.His ministry in Ephesus: “You know how I lived the whole time I was with you…. I served the Lord with great humility and tears, although I was severely tested by the plots of the Jews.” (20:18-19)

2.His future sufferings: “And now, compelled by the Spirit, I am going to Jerusalem, not knowing what will happen to me there. I only know that in every city the Holy Spirit warns me that prisons and hardships are facing me.” (20:22-23)

3.His exhortation to the elders: “Keep watch….Be shepherds….Be on your guard.” (20:28-31).  “So the shepherds of Christ’s flock have a double duty: to feed the sheep (by teaching the truth) and to protect them from wolves 9by way of error).” (Stott) 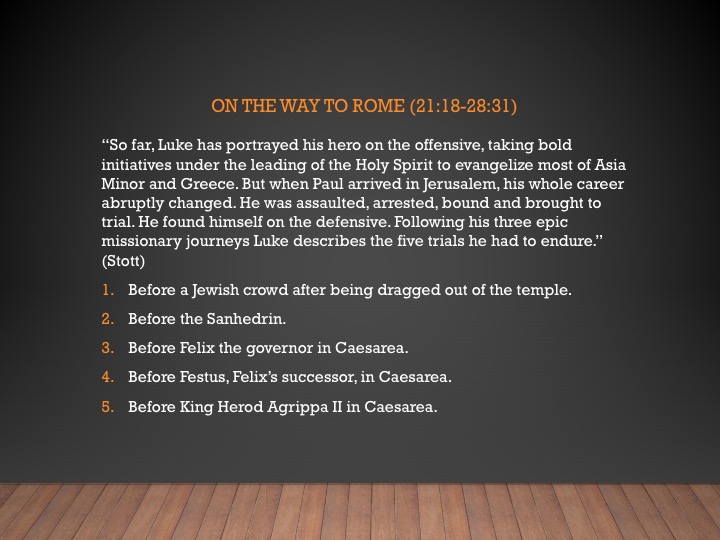 “So far, Luke has portrayed his hero on the offensive, taking bold initiatives under the leading of the Holy Spirit to evangelize most of Asia Minor and Greece. But when Paul arrived in Jerusalem, his whole career abruptly changed. He was assaulted, arrested, bound and brought to trial. He found himself on the defensive. Following his three epic missionary journeys Luke describes the five trials he had to endure.” (Stott)

1.  Before a Jewish crowd after being dragged out of the temple.

3.  Before Felix the governor in Caesarea.

4.  Before Festus, Felix’s successor, in Caesarea. 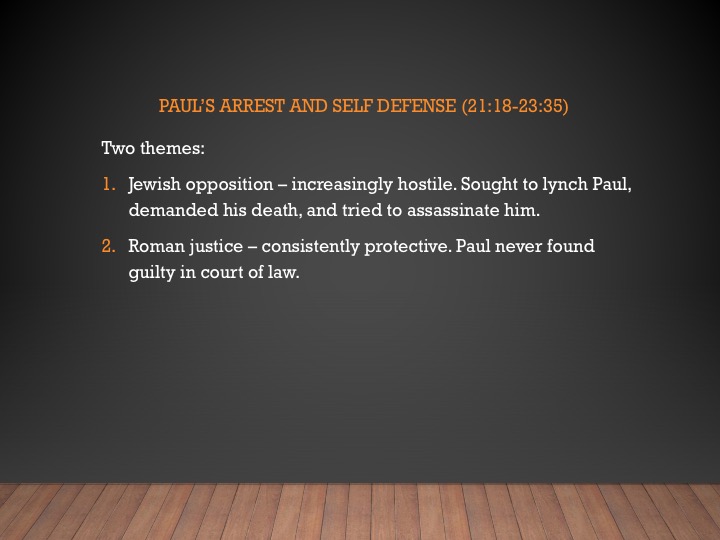 1.Jewish opposition – increasingly hostile. Sought to lynch Paul, demanded his death, and tried to assassinate him. 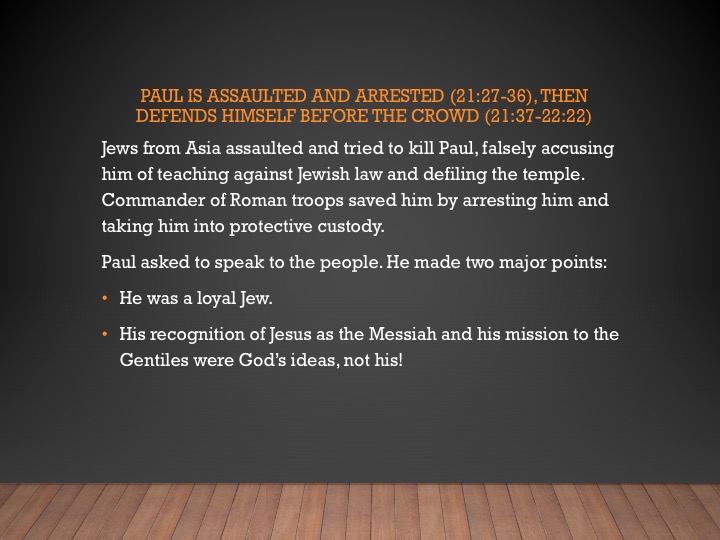 Jews from Asia assaulted and tried to kill Paul, falsely accusing him of teaching against Jewish law and defiling the temple. Commander of Roman troops saved him by arresting him and taking him into protective custody.

Paul asked to speak to the people. He made two major points:

He was a loyal Jew.

His recognition of Jesus as the Messiah and his mission to the Gentiles were God’s ideas, not his! 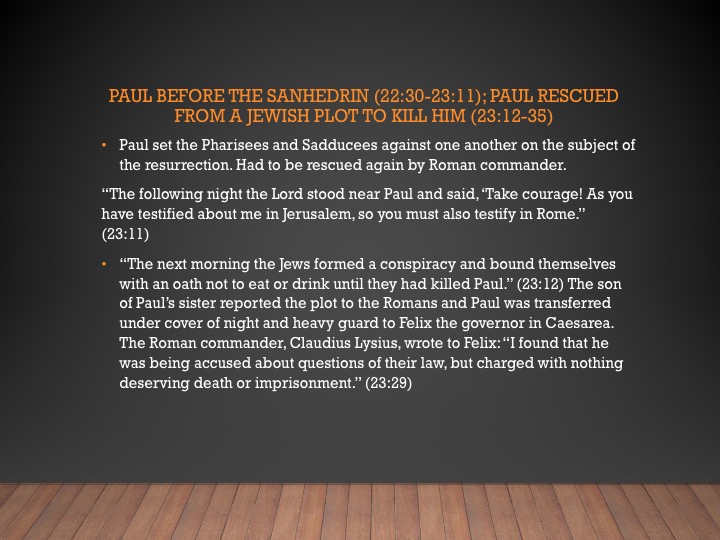 Paul set the Pharisees and Sadducees against one another on the subject of the resurrection. Had to be rescued again by Roman commander.

“The following night the Lord stood near Paul and said, ‘Take courage! As you have testified about me in Jerusalem, so you must also testify in Rome.” (23:11)

“The next morning the Jews formed a conspiracy and bound themselves with an oath not to eat or drink until they had killed Paul.” (23:12) The son of Paul’s sister reported the plot to the Romans and Paul was transferred under cover of night and heavy guard to Felix the governor in Caesarea. The Roman commander, Claudius Lysius, wrote to Felix: “I found that he was being accused about questions of their law, but charged with nothing deserving death or imprisonment.” (23:29) 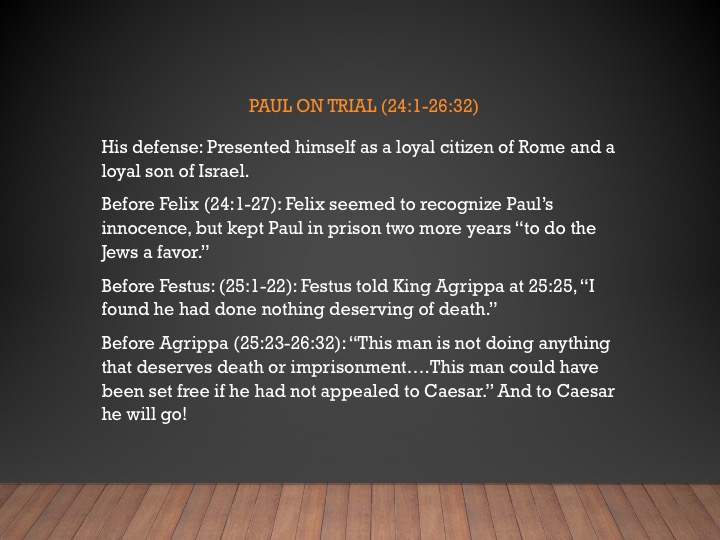 His defense: Presented himself as a loyal citizen of Rome and a loyal son of Israel.

Before Felix (24:1-27): Felix seemed to recognize Paul’s innocence, but kept Paul in prison two more years “to do the Jews a favor.”

Before Agrippa (25:23-26:32): “This man is not doing anything that deserves death or imprisonment….This man could have been set free if he had not appealed to Caesar.” And to Caesar he will go! 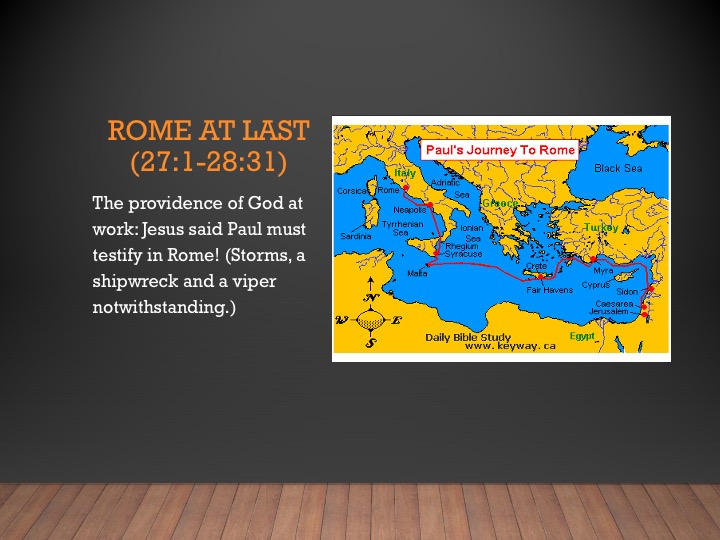 The providence of God at work: Jesus said Paul must testify in Rome! (Storms, a shipwreck and a viper notwithstanding.) 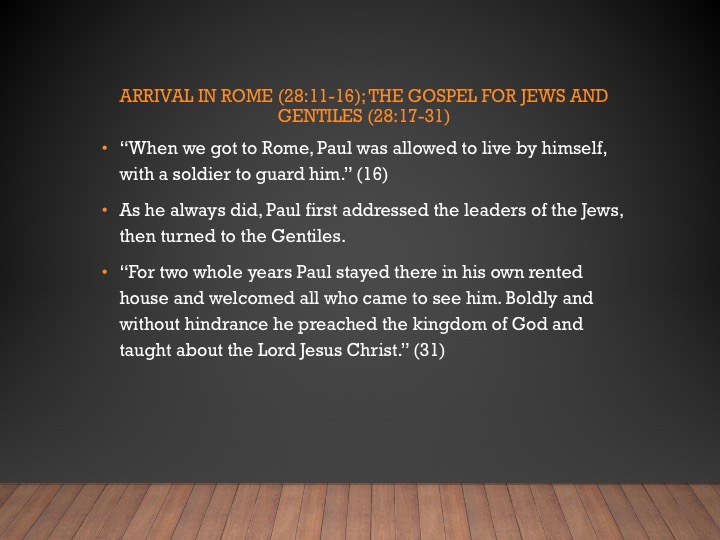 “When we got to Rome, Paul was allowed to live by himself, with a soldier to guard him.” (16)

As he always did, Paul first addressed the leaders of the Jews, then turned to the Gentiles.

“For two whole years Paul stayed there in his own rented house and welcomed all who came to see him. Boldly and without hindrance he preached the kingdom of God and taught about the Lord Jesus Christ.” (31)