Welcome back to Sacred Texts of the World.  We are now turning to Buddhism. If you missed, or more likely, forgot, most of the first sacred text discussion when we covered Hinduism earlier let me remind you that we are not trying to do a comparative religion study. Nothing wrong with that but doing an in depth comparative religion study can be daunting in scope. Instead we are going to do something related but different.

We are focusing on the sacred texts of some of the major world religious traditions, as a surrogate for understanding some of the underlying thinking behind these traditions. 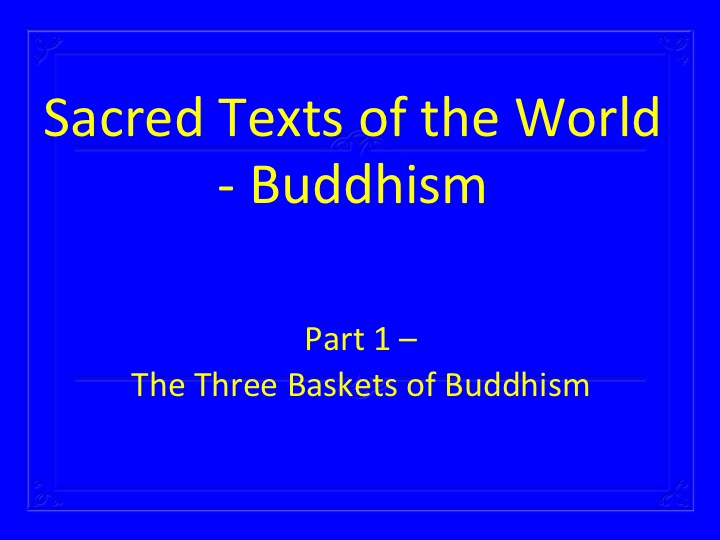 For context, let's first mention some current religious demographics. Religious demographics are notoriously inaccurate because there is no good way to collect the data. There are about 400 to 500 million Buddhists in the world today. Some of them are in the North America, Europe and number of other countries, but the great majority, possibly more than 96% is in Southeast Asia, East Asia, and in Tibet and neighboring regions. Demographically, it is still a predominately Asian religion. And we will get soon into some discussion of the types of Buddhism practiced in those different parts of Asia, because another important thing to understand in Buddhism is that, like other religious movements, it has evolved over time into different forms in different cultures. And some of those differences are significant. That makes it hard to understand for outsiders, but we will try to make some sense of it by looking at it from the standpoint of the sacred texts.

The next thing to understand is that there is not one universal version of Buddhism. Everything I tell you for this week and next must be considered in light of the fact that it may be different across the three major branches of Buddhism. 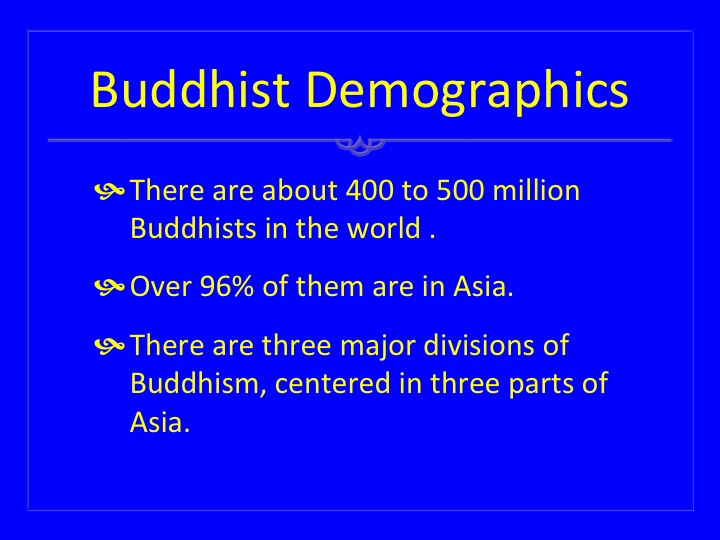 These are the tree major branches, and the places where they predominate. 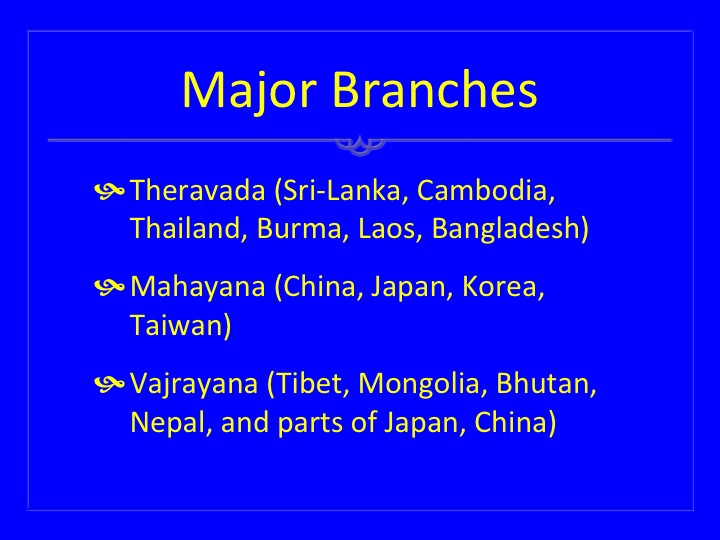 And on a map you can see that Buddhism is predominately an Asian religion. This is not to say Buddhism does not exist elsewhere, in fact Buddhist temples can be found around the world.  But the numbers are again, predominately in Asia. 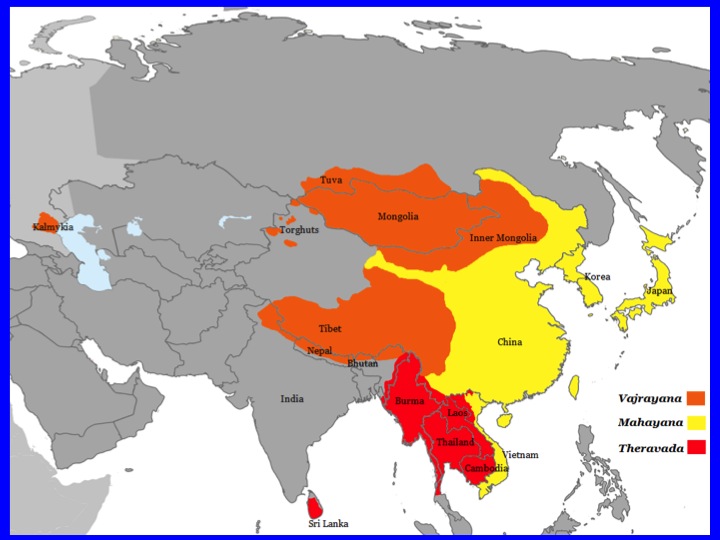 Buddhism's Canon is rather gigantic compared to, for example, our Bible. Depending on how you count pages it is considered to be over 100 times larger. As you can imagine this raises the issue of whether most Buddhists have read through their canon. As we will see later, the answer is no. But, like Hinduism, Buddhism's sacred texts play a different role in their religion. 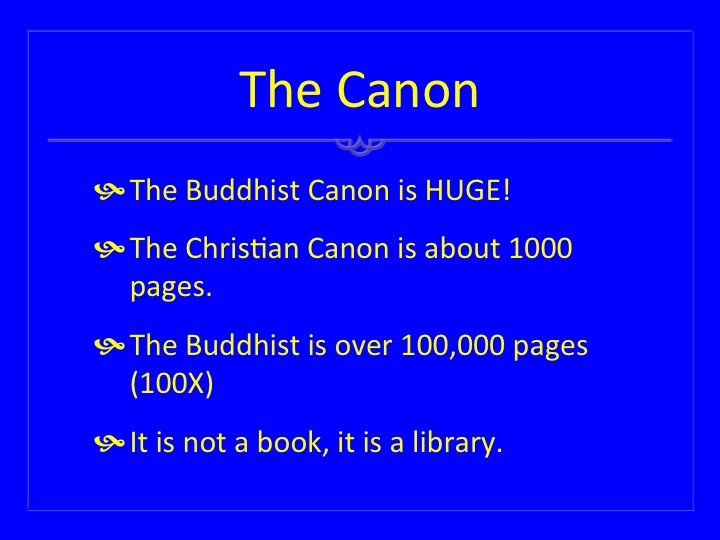 Now - let's make matters worse. There are actually three canons in Buddhism. Each developed in a different language. And they are not identical. 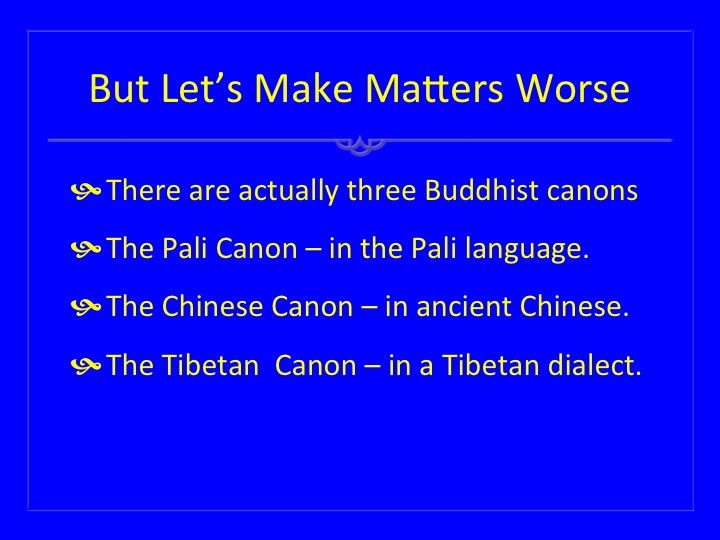 You may often hear about the three baskets of Buddhism, called the Tripitika. The term baskets refers to the fact that as the original Pali canon was being written down (on palm leaves), the leaves were dropped into three different baskets. We will get later into what the three baskets contained. 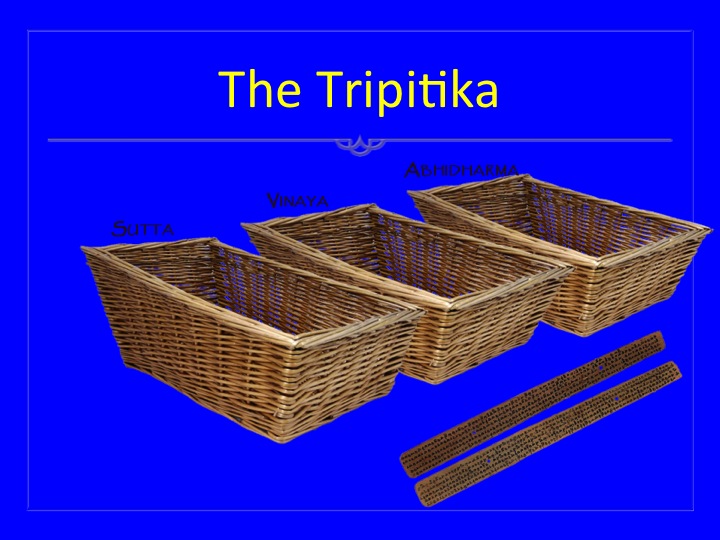 But before we get into the sacred texts let's start at the beginning.  How did Buddhism get it's name and how did it start. It stated in the 5th century BCE with a Northern Indian Prince named Siddhartha Gautama. He gave up great wealth and became a wandering ascetic. After intensive meditations he experienced a sudden awakening and announced that he finally understood reality. He became known as the Buddha - meaning the Enlightened One or the one who awoke.

He then spent the next 45 years teaching - especially the Four Noble Truths. 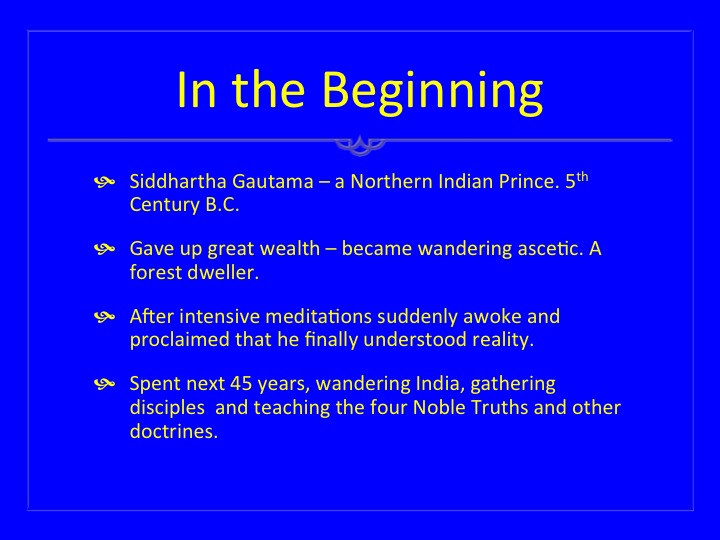 The Four Nobel Truths are easy to state:

All life is suffering.

If you can stop desire you can end suffering.

You can stop desire by following the Eightfold Path. 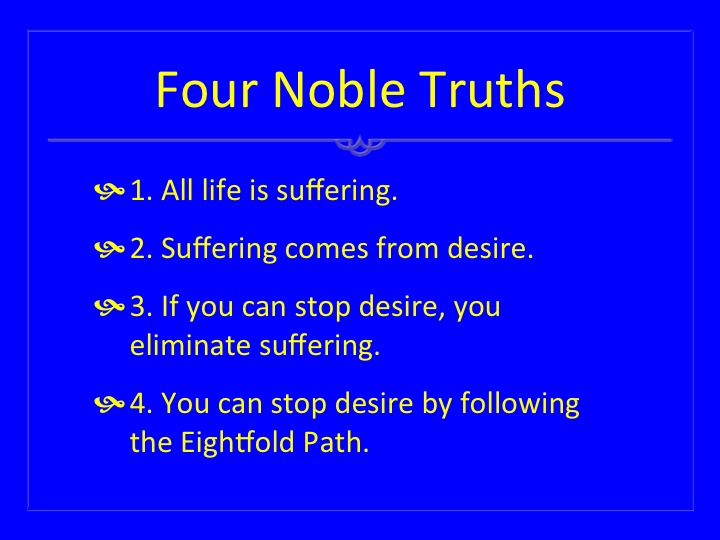 And the Eightfold Path can be broken into 3 major parts. Wisdom, Morality, and Meditation.

We are not going to get into detailed descriptions of what each of these steps means at this time. But these rather simple lists are in a sense the Buddhist prescription of salvation. But you might notice something missing in this description of the path. Anyone notice what might be missing?  There is no mention of a God or gods. 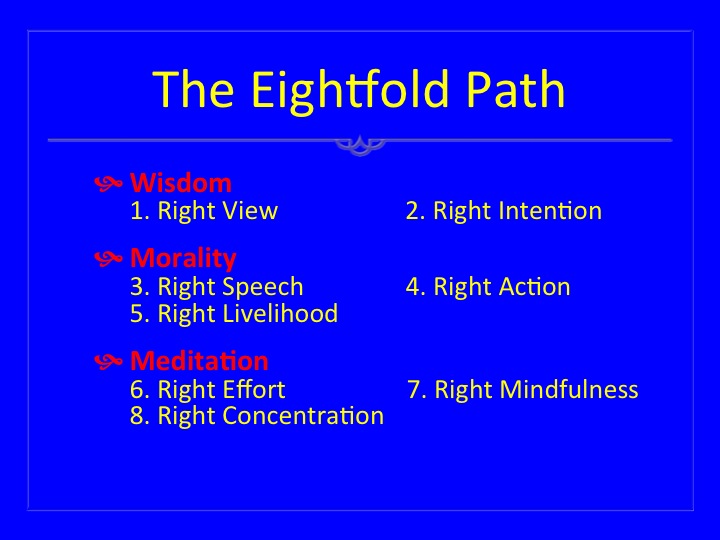 The Buddhism worldview shared some aspects of Hinduism, which we studied earlier.  These terms did not have the exact same meaning in Buddhism. For example, the word Dharma in Buddhism referred primarily to the teachings of the Buddha. 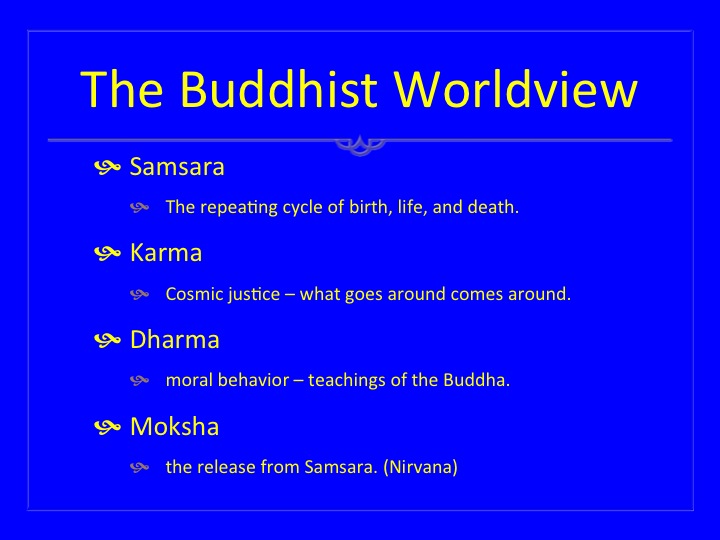 He also rejected the authority of the Brahman priests and all of their rituals. 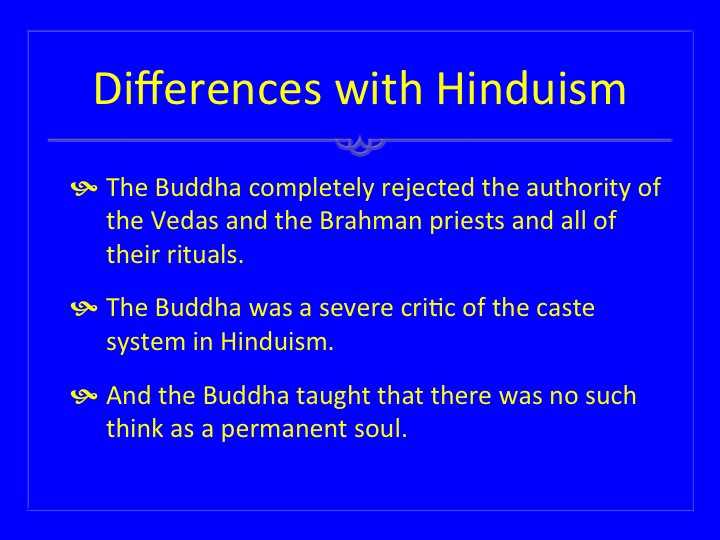 Another significant difference. In Hinduism there was the permanent soul that repeatedly was reincarnated into different bodies in the repeating cycle of birth, life, and death. Part of the Buddha’s philosophy was that nothing is permanent, including the soul. So there is no self, no soul. Instead at any one point in time we are all made up of the five aggregates.

Sensations (the signals from our senses)

Perceptions (our interpretations and categorization of the sensations)

And the Buddha taught that these five aggregates are rather loosely connected together to make up the self but that each of the aggregates are constantly changing so there cannot possibly be a permanent self.

So that, very briefly, is what he taught. But how did this play out. Once the Buddha achieved enlightenment he wanted to teach it to everyone he could, but he realized he would need help. And he also realized that he needed to first find some people who were spiritually advanced so they would understand, so he remembered the five other men who had practiced austerity, so he walked 150 miles to a deer park near the Indian town of Benares and found them.  When he met them he announced that he had been enlightened and now knew the Middle Way, between a path of strict austerity and a life of decadence. And he offered to teach it to them. They agreed and his teaching was basically the Buddha’s first sermon. As a result of the sermon, they became enlightened and agreed to be ordained as his first bhikkhu, or monks.  This was the origin of what is now called the Sangha, the community of Monks and Nuns. 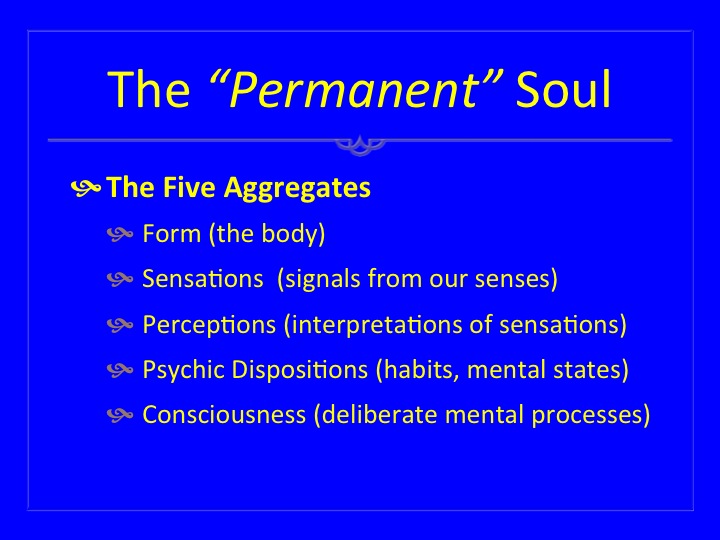 So it is time to talk about the Sangha – this community of monks, and later he added nuns. And I want to emphasize the central importance of this community to Buddhism. The Sangha gradually became widespread across the land and were important in teaching the Buddha's understanding of reality to the people. 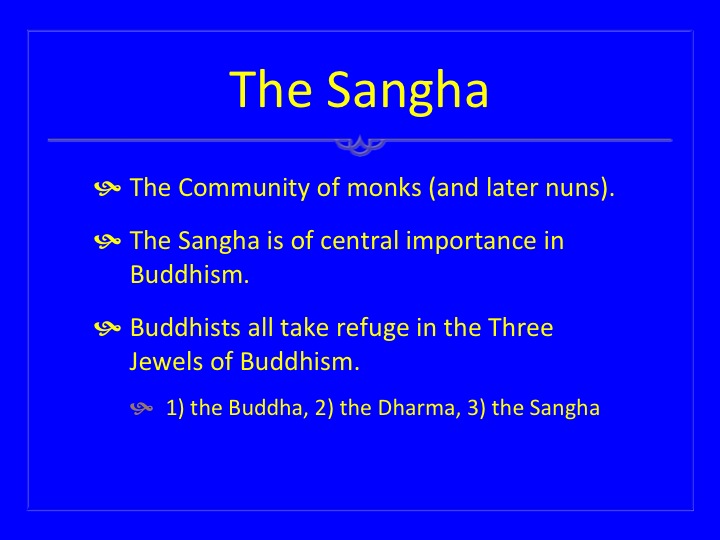 One of the key teachings that all Buddhists were taught were the Five Precepts. They are shown on this slide . 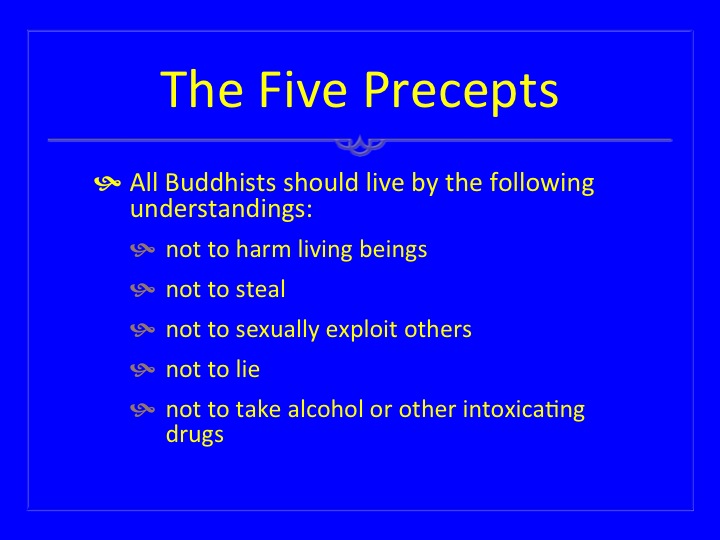 And then novice monastics had an additional five that they had to practice. Probably not a list you would have generated. 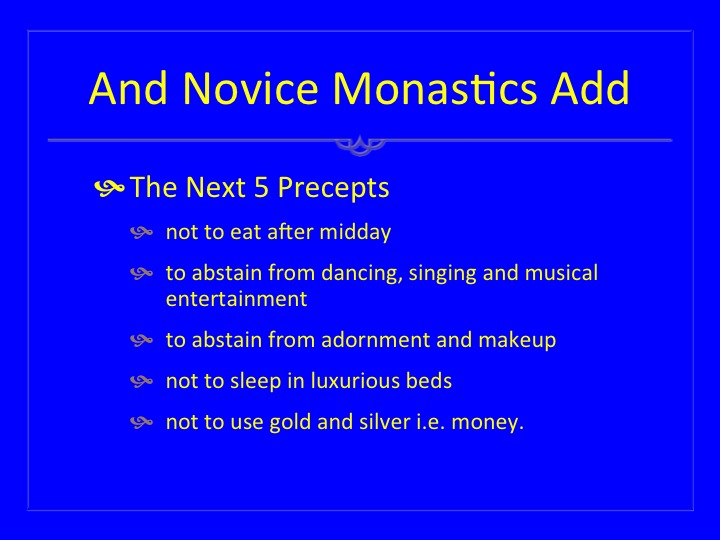 But those two simple lists were just the beginning. One of the sacred texts that were very important (for monks and nuns) was the Pratimoksha. a very extensive list of the rules for fully ordained monks or nuns. In the original Theravada Buddhism there were 227 rules for monks and 311 for nuns. The Pratimoksha had to be memorized. 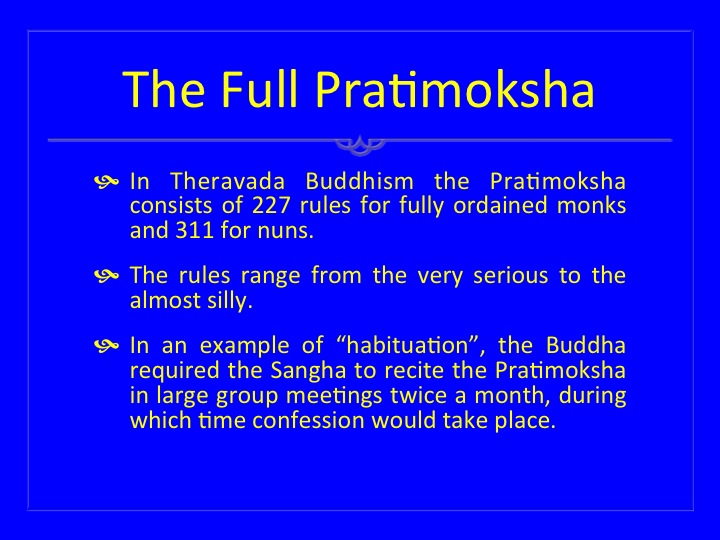 And finally next week we will turn to the sacred texts themselves. And importantly we will talk about Buddhism evolved into new forms.

And we will review some of the most famous teachings in the sacred texts. 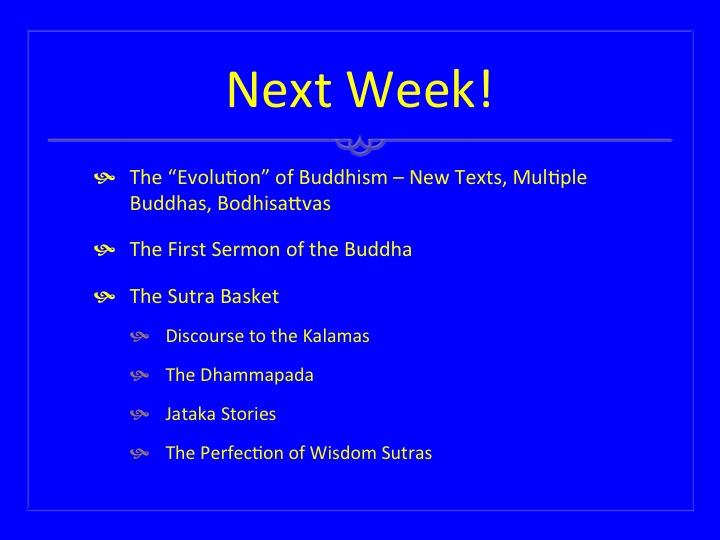