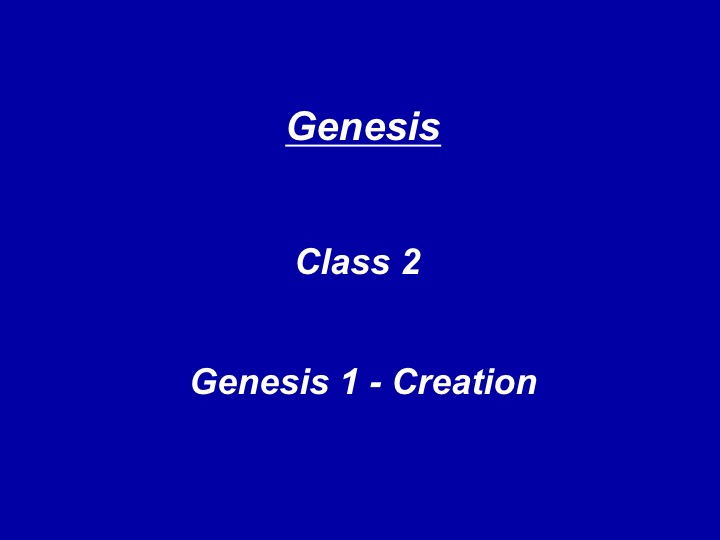 In today’s class we are literally going to begin at the beginning – of Genesis that is. I mentioned last week that to reach a deeper understanding of Ancient literature like Genesis we need to understand a lot of contextual material such as the history of Israel and the history of the Ancient Near East.  But we are going to delay that introductory material until class 3 and instead plunge right into the biblical text.  The reason is we want right away to experience how to read the literature of an ancient people far removed from the 21st century in time and place, and culture.  And I hope to give you a sense that this is not easy to do.  But as I mentioned ad nausea last week if we don’t’ occasionally do this and instead always read Genesis from a 21st Century viewpoint we are in danger of missing so much. 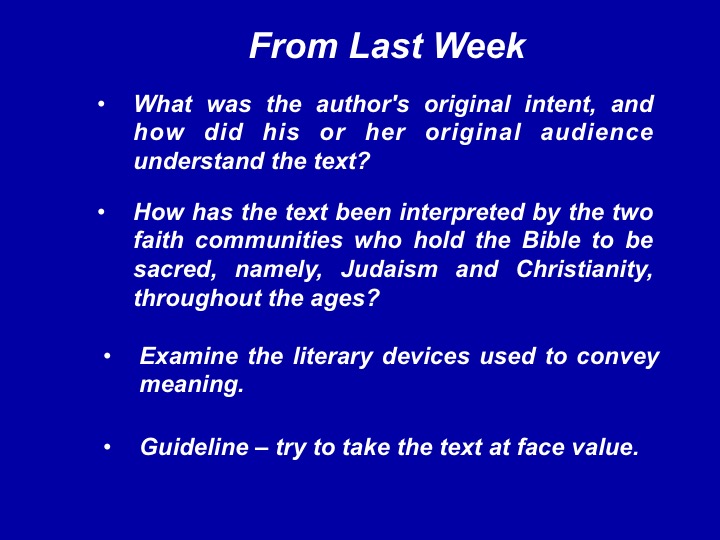 Ø  What was the author's original intent, and how did his or her original audience understand the text?

Ø  How has the text been interpreted by the two faith communities who hold the Bible to be sacred, namely, Judaism and Christianity, throughout the ages?

And finally  - let me reiterate one of the guidelines we will try to follow this summer – to take the text at face value – what does it actually say? The long and jaded history of translations of the Bible doesn't’t always do that.  Each denomination has tended to “tweak” the translation to get it to coincide with the theology of the day. And since theology is man-made – it varies over time and between denominations.

So let’s not hesitate – let’s plunge into the text.  As I mentioned last week everything we will read today is from the Jewish Publication Society’s recent translation.  And the reason is it is a very literal translation from the original Masoretic texts but in addition it is an idiomatic translation that strives to bring forth the understanding of the text that the original readers 3000 years ago would have understood. 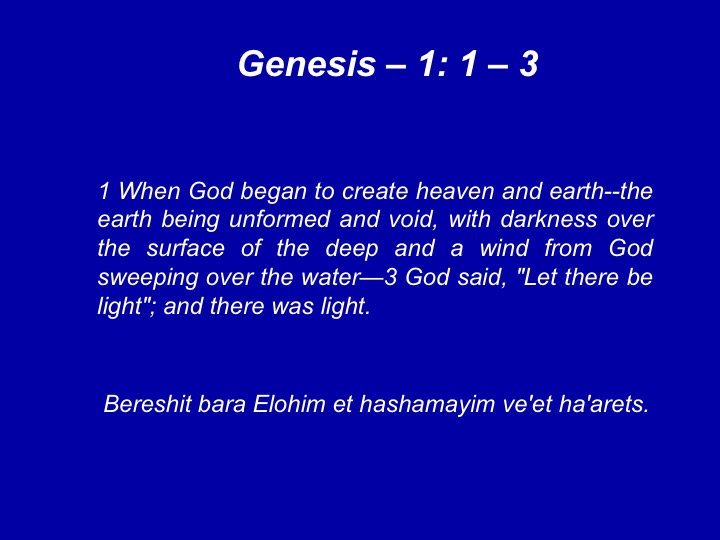 Let’s read the first three verses together from the JPS translation:

1 When God began to create heaven and earth--the earth being unformed and void, with darkness over the surface of the deep and a wind from God sweeping over the water—3 God said, "Let there be light"; and there was light.

Now – right away we are into controversy over how something is translated. In fact the opening Hebrew sentence of the Bible has created so much controversy over the last 2000 years that we could literally devote this summer to dissecting this first sentence.  But we will not do that because it would bore both you and me to death – we will only spend a few minutes on it. But it is few minutes well spent so we understand why there has been so much debate.

The problem that appears immediately comes from both grammar and word meaning.  We immediately encounter an idiom that is difficult to translate clearly into English. Bereshit is the first word in the Bible and as such it is the name of the book that we call Genesis. In the Ancient Near East books did not have separate titles written by the article – the first word or phrase is the title.  Translated very literally it means “at the head of things”. But a perfectly good rendition is “in the beginning”. Bara is a unique word that only applies to the actions of God (only God can bara) and means something like to create by shaping or forming.  And from a grammar standpoint this first sentence should not be read as a complete sentence – it is not an independent clause – it is a dependent clause. The independent clause does not appear until verse 3.  So the complete idea being presented here in these 3 verses is that as God started his process of creation, he was starting with something already there, and his creation process was to work on that something. In theology this concept is called creation from pre-existent matter.  And that is where the controversy is. So why is this type of reading controversial.  Well it was not controversial for the first 10 centuries after Genesis.  It became controversial among theologians in the first few centuries AD – after. So let’s briefly review that controversy.

During the first few centuries AD, which is when Jewish and Christian theology was developed – by the early Jewish rabbis and the Christian church fathers there was a great tension in interpretation brought on by the threat of Gnostic thinking.  It is important to note that the Rabbis and the fathers were thoroughly immersed and educated in Greek philosophy. This was 5 centuries after the conquest of the holy lands by Alexander the Great and the region was thoroughly Hellenized – all educated people spoke and argued in Greek and theological work was done from the Greek texts of the Hebrew Bible – the Septuagint.  Although all of these early theologians recognized that the Greeks were polytheists and therefore pagans – there were aspects of Greek thought that appealed to them.  The principle one that came somewhat from Plato but particularly from the Neo-Platonists of the 2nd century – was the notion that behind all this litany of Gods there was one origin and principle. Plato and Aristotle called it the First Cause and the Neo-Platonists called it “the One”.  They never called it God.   But in that scheme of things this First Cause or One created everything out of nothing in the dim past of long, long ago.  And these early church fathers and Jewish rabbis loved that concept.  And so after much debate that developed a doctrine called “creation ex nihilo” – creation out of nothing.  That doctrine still exists today –in both Judaism and Christianity. 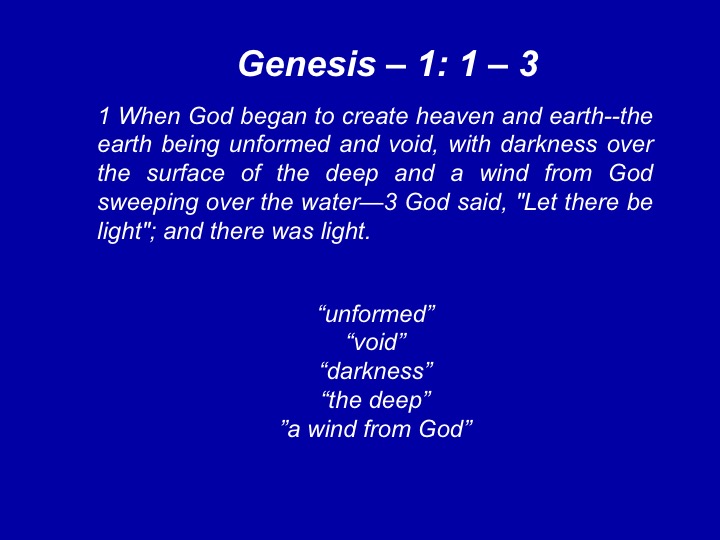 So how do those who insist in reading the text at face value and accepting what it says interpret this message? It says that as God was beginning his creative activities – and then the thought pauses while it describes the state of the world as God was beginning – it was unformed, it was void, there was darkness over the deep, and there was a wind from God. It is describing that which was pre-existent.  And how would the early Israelites have heard this list of pre-existent things?

In the culture of the ancient near east four of these things are bad, evil. If something is unformed or void it is not good.  This is sometimes defined as chaos.  Darkness? All ancient people were fearful of darkness – it was frightening and dangerous.  The deep in their culture referred to the great salt water ocean – the Mediterranean – it was hazardous, risky, treacherous. People who tried to cross it were afraid.  How do we know this – because all of the literature of the ancient near east – much of which predated Genesis – all identified things things as evil – to be avoided. The listeners or readers of this story would have instantly recognized this. And the wind from God – that was a good thing – because God was good.  And God’s role was to bring goodness into this chaotic and evil world.

And how did God do this – in verse 3 – the independent clause that we finally get to  - God said – “Let there be light”, and there was light.  Light is the exact antithesis of darkness – light is good.  How do we know it is good.  The very next verse tells us. 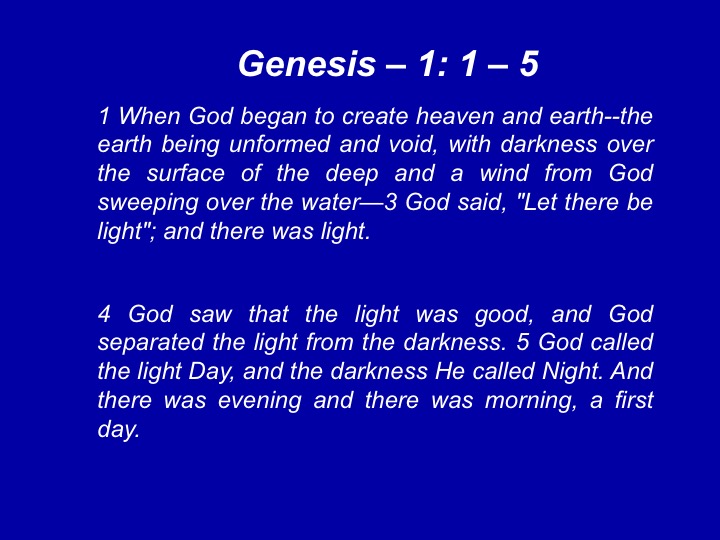 And God saw that the light was good, and God separated the light from darkness.  This is a repeating refrain you will see throughout this creation – God saw that X was good.  You will also see repeatedly that one of God’s creative activities was separation – God will separate X from Y – several times.  Because separation is an aspect of creating order out of chaos. Every time you create a good you separate it from the evil. Then you immediately see another important things that God does, as did all of the Gods of the ancient near east. – God names things. They knew this is what other gods did – and they wanted to hear that their God did this.  And this is then followed by another repeating refrain – and there was evening and there was morning, a first day.

So this very carefully constructed narrative is repeatedly sending the message – order out of chaos.  That is what is happening here. 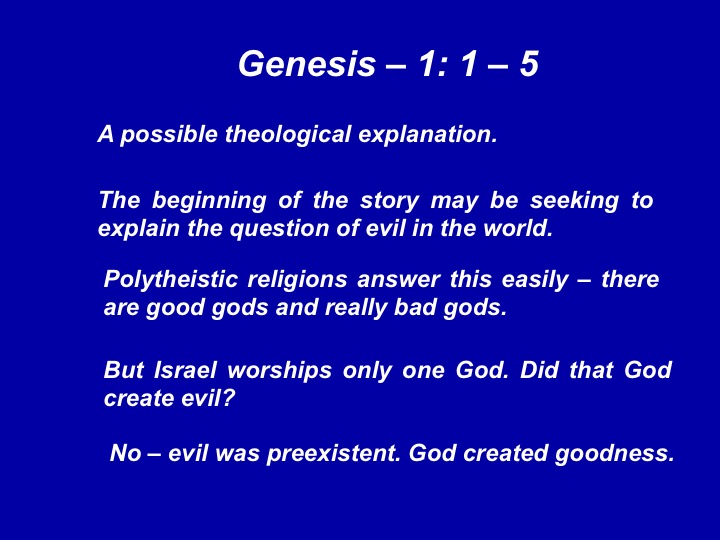 Now what is going on here in verses 1-5.  The beginning of the story may be seeking to explain the question of evil in the world. This is a theological issue that all religions must answer.

For the polytheisms of the ancient world, there was a simple answer because there were plenty of gods to go around, and some of these were evil gods capable of inflicting great harm on humans. They are the source of evil.

For Israel, by contrast, this was a major problem, because only one God is worshipped, and that god, by definition, is a good God. Thus, this story gets God "off the hook," as it were, for the existence of evil in the world. He cannot be blamed, because evil is preexistent. God brought only goodness into the world. 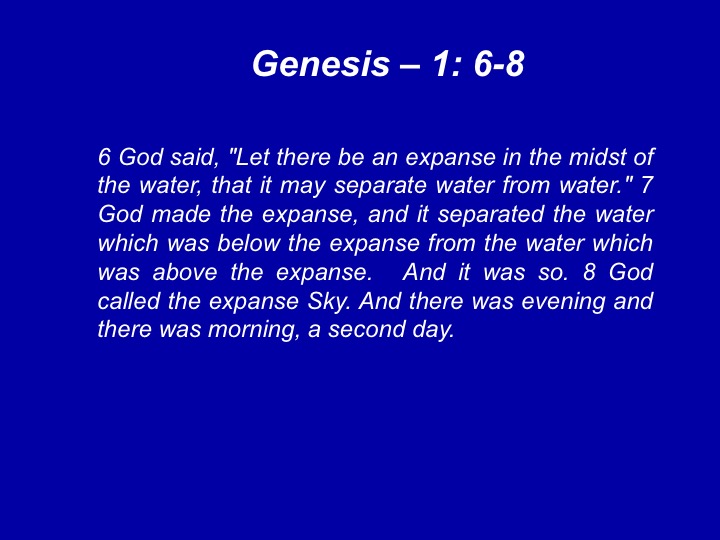 Now we spent a lot of time on verses 1-5, in order to set the stage for the rest.  So don’t worry – we will move a little faster through the remainder. 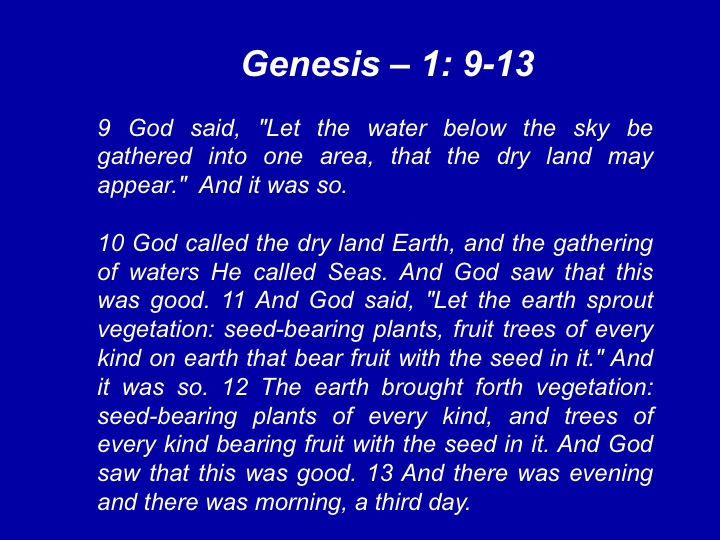 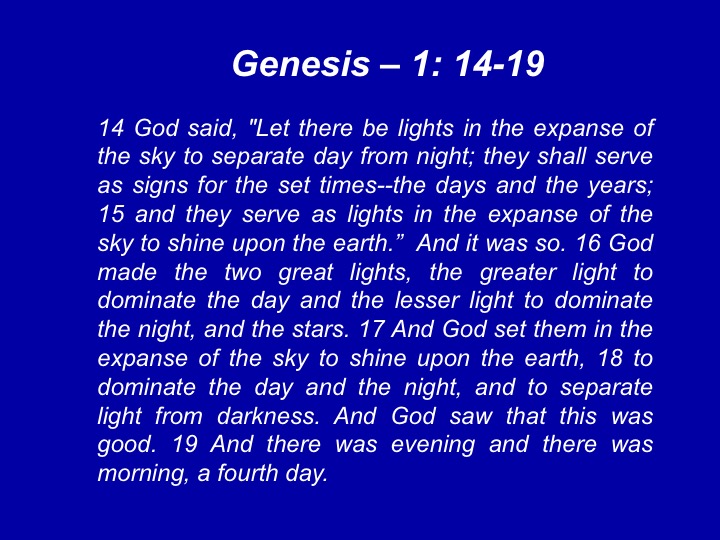 An important point to be noticed is the presence of demythologizing, that is, the conscious avoidance of words that can be associated with pagan deities. Hebrew was a dialect of the Canaanite language.  They were close enough that they could easily communicate with each other. Just like British English, American English, and Australian English are all different dialects yet we can understand each other (sort of).  In Hebrew the word for sun is exactly the same as the word for sun in Canaanite.  The word is shemesh. The word for moon yareah is also the same.  But importantly those two words are the names of the sun god and the moon god of the Canaanites. But the author does not want the reader to even for a moment think that God is responsible for the creation of pagan deities. So those name are consciously avoided – and we stick with the greater light and the lesser light. 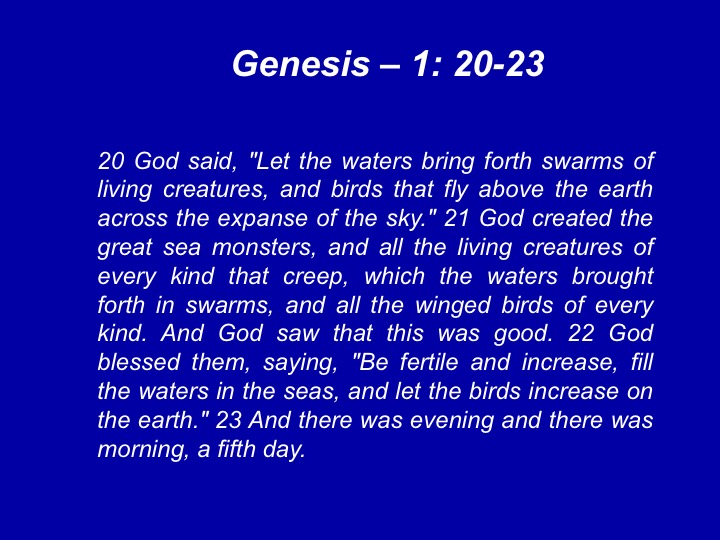 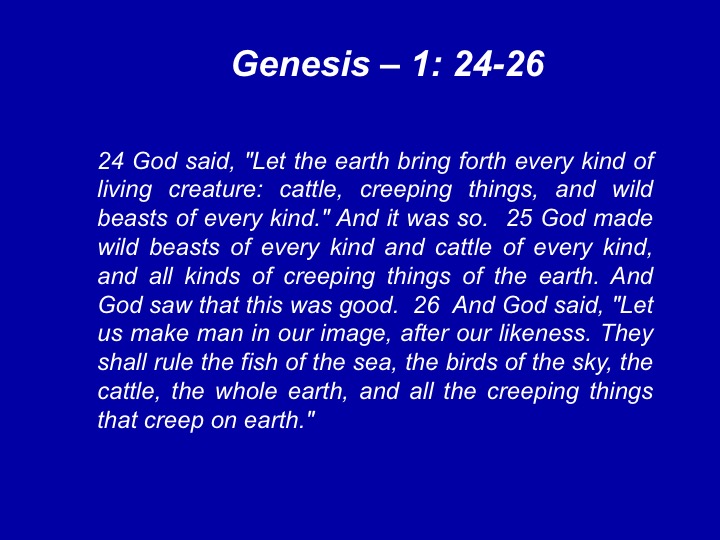 Now day 6 will require three slides – and I will read them completely through for continuity. We will return to highlight some things. 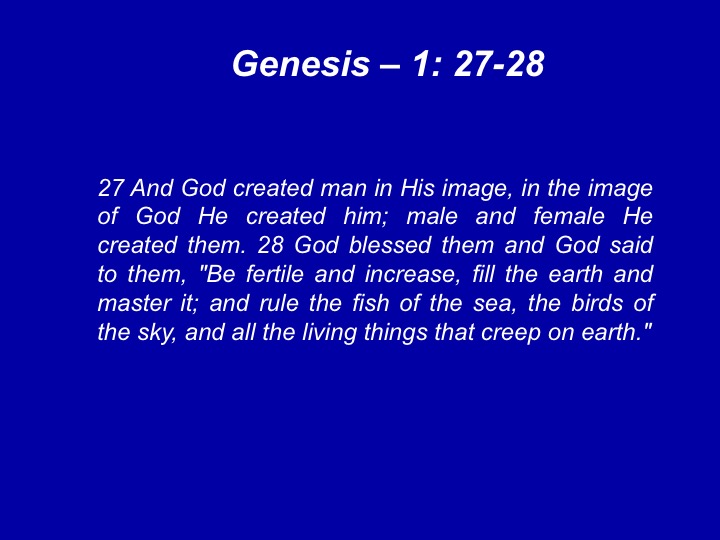 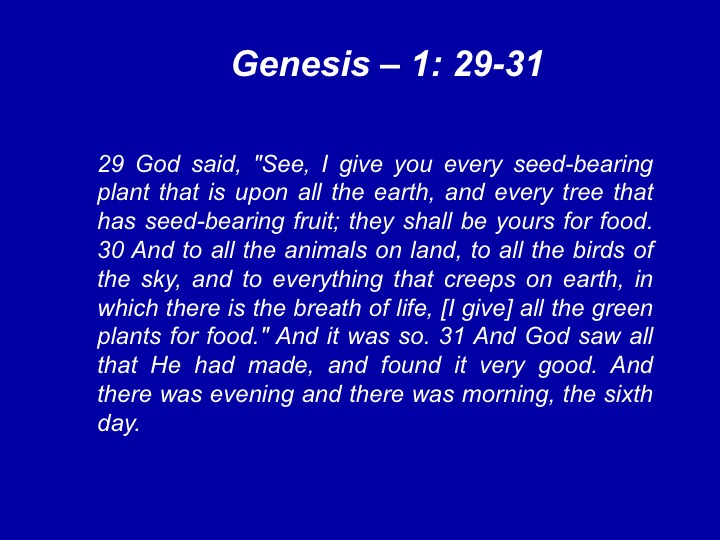 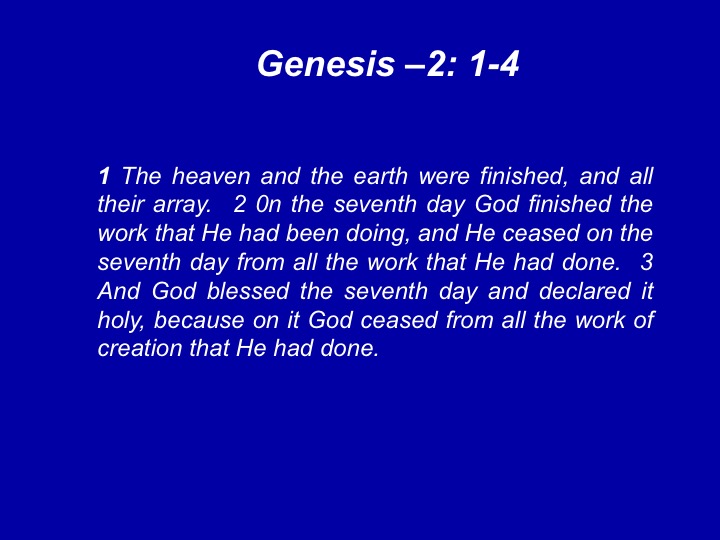 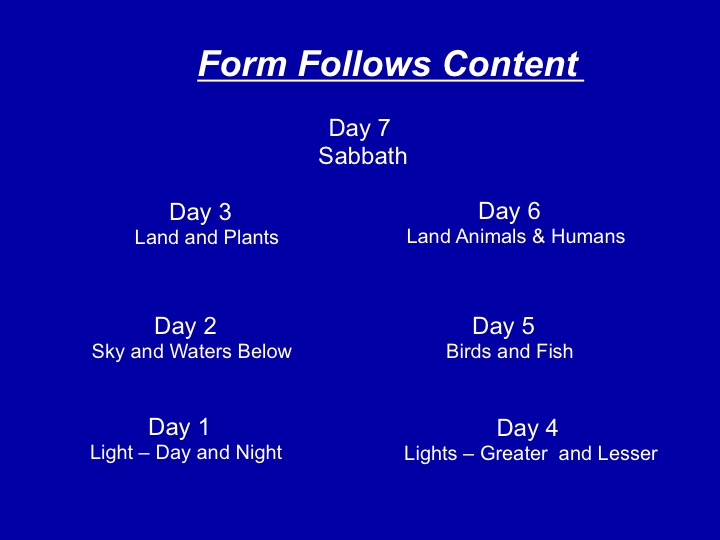 The six days of creation are aligned according to a pattern, with the first three days paralleled by the second three days.

This pattern acts as a blueprint and establishes the overall theme of Genesis 1, namely, creation of the world according to an order, representative of goodness, continuing the theme of order out of a chaos, or good out of evil, expressed above. As such, our text is an example of "form follows content."

C. "And it was evening and it was morning."

We note, however, that the second of these is lacking in day 2. The reason for this is that the second day deals with the separation of the waters into the waters above and the waters below. Because the watery mass is symbolic of evil, as noted above, the refrain must be omitted. So the author sacrificed literary perfection here in order to make the theological point.

And in our next lesson we will take a slight tangent and briefly review ancient Israelite History.