1  The Lord said to Moses, 2 If you sin: by acting unfaithfully against the Lord; by deceiving a fellow citizen concerning a deposit or pledged property; by cheating a fellow citizen through robbery; 3 or, though you’ve found lost property, you lie about it; or by swearing falsely about anything that someone might do and so sin,

4 at that point, once you have sinned and become guilty of sin, you must return the property you took by robbery or fraud, or the deposit that was left with you for safekeeping, or the lost property that you found, 5 or whatever it was that you swore falsely about. You must make amends for the principal amount and add one-fifth to it. You must give it to the owner on the day you become guilty. 6 You must bring to the priest as your compensation to the Lord a flawless ram from the flock at the standard value as a compensation offering. 7 The priest will make reconciliation for you before the Lord, and you will be forgiven for anything you may have done that made you guilty. 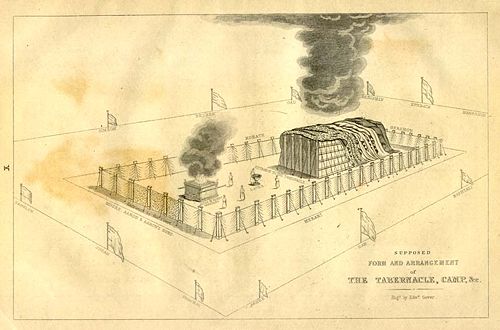 14 This is the Instruction for the grain offering: Aaron’s sons will present it before the Lord in front of the altar. 15 The priest will remove a handful of the choice flour and oil from the grain offering, and all of the frankincense that is on it, and burn this token portion completely on the altar as a soothing smell to the Lord. 16 Aaron and his sons will eat the rest of it. It must be eaten as unleavened bread in a holy place; the priests must eat it in the meeting tent’s courtyard. 17 It must not be baked with leaven. I have made it the priests’ share from my food gifts. It is most holy like the purification offering and the compensation offering. 18 Only the males from Aaron’s descendants can eat it as a permanent portion from the Lord’s food gifts throughout your future generations. Anything that touches these food gifts will become holy.

19 The Lord said to Moses, 20 This is the offering that Aaron and his sons must present to the Lord on the day of his anointment: one-tenth of an ephah of choice flour as a regular grain offering, half in the morning and half in the evening. 21 It must be prepared on a griddle with oil. You must bring it thoroughly mixed up and must present it as a grain offering of crumbled pieces as a soothing smell to the Lord. 22 The priest who is anointed from among Aaron’s sons to succeed him will prepare the offering as a permanent portion for the Lord. It will be completely burned as a complete offering. 23 Every priestly grain offering must be a complete offering; it must not be eaten.

1 This is the Instruction for the compensation offering: It is most holy. 2 The compensation offering must be slaughtered at the same place where the entirely burned offering is slaughtered, and its blood must be tossed against all sides of the altar. 3 All of its fat will be offered: the fat tail; the fat that covers the insides; 4 the two kidneys and the fat around them at the loins; and the lobe on the liver, which must be removed with the kidneys. 5 The priest must burn them completely on the altar as a food gift for the Lord; it is a compensation offering. 6 Any male priest can eat it. It must be eaten in a holy place; it is most holy.

35 This is what Aaron and his sons are allotted from the Lord’s food gifts once they have been presented to serve the Lord as priests. 36 The Lord commanded that these things be given to the priests by the Israelites, following their anointment. It is their permanent portion throughout their future generations.

1 The Lord said to Moses, 2 Take Aaron and his sons with him, the priestly clothing, the anointing oil, a bull for the purification offering, two rams, and a basket of unleavened bread, 3 and assemble the whole community at the meeting tent’s entrance.

4 Moses did as the Lord commanded him, and the community assembled at the meeting tent’s entrance. 5 Moses said to the community, “This is what the Lord has commanded us to do.” 6 Then Moses brought Aaron and his sons forward and washed them in water.7 Moses put the tunic on Aaron, tied the sash around him, and dressed him in the robe. Moses then put the priestly vest on Aaron, tied the woven waistband of the vest around him, and secured the vest to him with it. 8 Then Moses placed the chest piece on Aaron and set the Urim and Thummim into the chest piece. 9 Moses placed the turban on Aaron’s head and put the gold flower ornament, the holy crown, on the turban’s front, just as the Lord had commanded him.

10 Moses then took the anointing oil and anointed the dwelling and everything in it, making them holy by doing so. 11 He sprinkled some of the oil on the altar seven times, and anointed the altar and all its equipment, as well as the basin and its base, to make them holy. 12 He poured some of the anointing oil on Aaron’s head, thereby anointing him to make him holy. 13 Then Moses brought Aaron’s sons forward, dressed them in tunics, tied sashes around them, and wrapped headbands on them, just as the Lord had commanded him.

14 Next Moses brought forward the bull for the purification offering. Aaron and his sons pressed their hands on its head. 15 Moses slaughtered it, then took the blood and, using his finger, put it on all of the altar’s horns, purifying the altar. He poured the rest of the blood out at the altar’s base. Then he made the altar holy so that reconciliation could be performed on it. 16 Moses removed all the fat that was around the insides, the lobe of the liver, the two kidneys and their fat, and he completely burned it on the altar. 17 But the rest of the bull, including its hide, its flesh, and its dung, he burned with fire outside the camp just as the Lord had commanded him.

18 Then Moses presented the ram for the entirely burned offering, and Aaron and his sons pressed their hands on its head. 19 Moses slaughtered it, then tossed the blood against all sides of the altar. 20 He cut up the ram into pieces, and then completely burned the head, pieces, and fat. 21 After he washed the insides and lower legs with water, Moses completely burned the whole ram on the altar. It was an entirely burned offering for a soothing smell; it was a food gift for the Lord, as the Lord had commanded Moses.

22 Moses then presented the second ram, the ram for ordination, and Aaron and his sons pressed their hands on its head. 23 Moses slaughtered it, then took some of its blood and put it on Aaron’s right earlobe, on his right thumb, and on his right big toe. 24 Then Moses brought forward Aaron’s sons and put some of the blood on their right earlobes, their right thumbs, and their right big toes. Moses tossed the rest of the blood against all of the altar’s sides. 25 Then he took the fat—the fat tail, all the fat that was around the insides, the lobe of the liver, the two kidneys and their fat—as well as the right thigh. 26 From the basket of unleavened bread that was before the Lord, he took one loaf of unleavened flatbread, one loaf of flatbread made with oil, and one unleavened wafer, and he placed these on the fat pieces and on the right thigh. 27 Moses set all of this in Aaron’s and his sons’ hands, then lifted them as an uplifted offering before the Lord. 28 Next Moses took this out of their hands and completely burned it on the altar, along with the entirely burned offering. This was an ordination offering for a soothing smell; it was a food gift for the Lord. 29 Next Moses took the breast from the ram for the ordination offering and lifted it as an uplifted offering before the Lord. It belonged to Moses as his portion, just as the Lord had commanded him. 30 Moses took some of the anointing oil and some of the blood that was on the altar and sprinkled it on Aaron and his clothes, and on his sons and their clothes as well. In this way, Moses made holy Aaron, his clothing, and Aaron’s sons and their clothing.

36 Aaron and his sons did everything the Lord commanded through Moses.

The haftarah is a text selected from the Prophets that is read after the reading of the Torah. It usually has a thematic link to the Torah reading that precedes it.