1 When God began to create the heavens and the earth— 2 the earth was without shape or form, it was dark over the deep sea, and God’s wind swept over the waters— 3 God said, “Let there be light.” And so light appeared. 4 God saw how good the light was. God separated the light from the darkness. 5 God named the light Day and the darkness Night.

There was evening and there was morning: the first day.

6 God said, “Let there be a dome in the middle of the waters to separate the waters from each other.” 7 God made the dome and separated the waters under the dome from the waters above the dome. And it happened in that way. 8 God named the dome Sky.

There was evening and there was morning: the second day.

9 God said, “Let the waters under the sky come together into one place so that the dry land can appear.” And that’s what happened.

13 There was evening and there was morning: the third day.

19 There was evening and there was morning: the fourth day.

20 God said, “Let the waters swarm with living things, and let birds fly above the earth up in the dome of the sky.” 21 God created the great sea animals and all the tiny living things that swarm in the waters, each according to its kind, and all the winged birds, each according to its kind. God saw how good it was. 22 Then God blessed them: “Be fertile and multiply and fill the waters in the seas, and let the birds multiply on the earth.”

23 There was evening and there was morning: the fifth day.

24 God said, “Let the earth produce every kind of living thing: livestock, crawling things, and wildlife.” And that’s what happened.

25 God made every kind of wildlife, every kind of livestock, and every kind of creature that crawls on the ground. God saw how good it was. 26 Then God said, “Let us make humanity in our image to resemble us so that they may take charge of the fish of the sea, the birds in the sky, the livestock, all the earth, and all the crawling things on earth.”

28 God blessed them and said to them, “Be fertile and multiply; fill the earth and master it. Take charge of the fish of the sea, the birds in the sky, and everything crawling on the ground.” 29 Then God said, “I now give to you all the plants on the earth that yield seeds and all the trees whose fruit produces its seeds within it. These will be your food. 30 To all wildlife, to all the birds in the sky, and to everything crawling on the ground—to everything that breathes—I give all the green grasses for food.” And that’s what happened. 31 God saw everything he had made: it was supremely good.

There was evening and there was morning: the sixth day.

World’s creation in the garden

15 The Lord God took the human and settled him in the garden of Eden to farm it and to take care of it. 16 The Lord God commanded the human, “Eat your fill from all of the garden’s trees; 17 but don’t eat from the tree of the knowledge of good and evil, because on the day you eat from it, you will die!” 18 Then the Lord God said, “It’s not good that the human is alone. I will make him a helper that is perfect for him.” 19 So the Lord God formed from the fertile land all the wild animals and all the birds in the sky and brought them to the human to see what he would name them. The human gave each living being its name. 20 The human named all the livestock, all the birds in the sky, and all the wild animals. But a helper perfect for him was nowhere to be found.

21 So the Lord God put the human into a deep and heavy sleep, and took one of his ribs and closed up the flesh over it. 22 With the rib taken from the human, the Lord God fashioned a woman and brought her to the human being. 23 The human[g] said,

“This one finally is bone from my bones and flesh from my flesh.

She will be called a woman because from a man she was taken.”

24 This is the reason that a man leaves his father and mother and embraces his wife, and they become one flesh. 25 The two of them were naked, the man and his wife, but they weren’t embarrassed.

1 The snake was the most intelligent[a] of all the wild animals that the Lord God had made. He said to the woman, “Did God really say that you shouldn’t eat from any tree in the garden?”

4 The snake said to the woman, “You won’t die! 5 God knows that on the day you eat from it, you will see clearly and you will be like God, knowing good and evil.” 6 The woman saw that the tree was beautiful with delicious food and that the tree would provide wisdom, so she took some of its fruit and ate it, and also gave some to her husband, who was with her, and he ate it. 7 Then they both saw clearly and knew that they were naked. So they sewed fig leaves together and made garments for themselves. 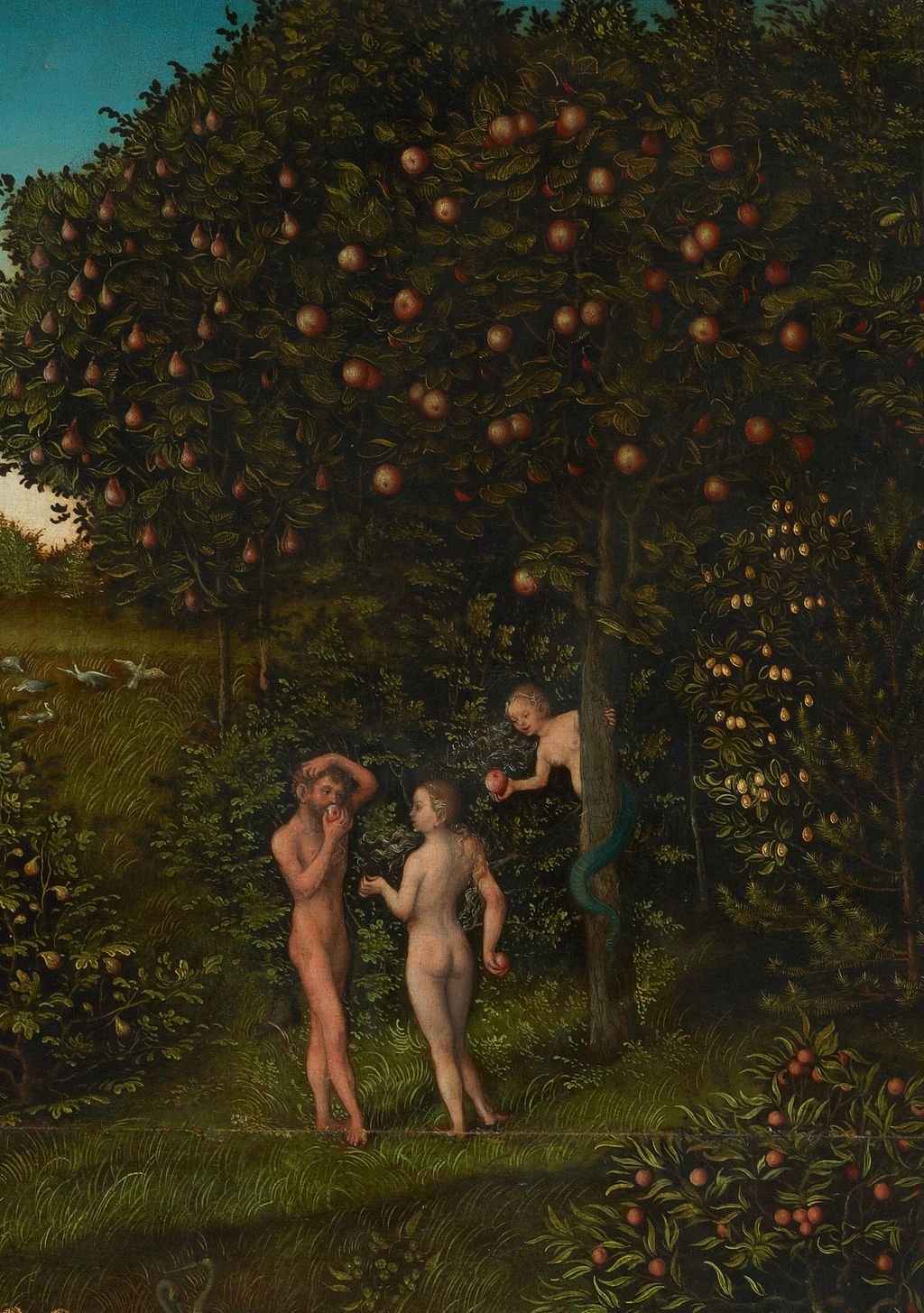 8 During that day’s cool evening breeze, they heard the sound of the Lord God walking in the garden; and the man and his wife hid themselves from the Lord God in the middle of the garden’s trees. 9 The Lord God called to the man and said to him, “Where are you?”

10 The man replied, “I heard your sound in the garden; I was afraid because I was naked, and I hid myself.”

11 He said, “Who told you that you were naked? Did you eat from the tree, which I commanded you not to eat?”

12 The man said, “The woman you gave me, she gave me some fruit from the tree, and I ate.”

And the woman said, “The snake tricked me, and I ate.”

14 The Lord God said to the snake,

On your belly you will crawl, and dust you will eat every day of your life.

16 To the woman he said, “I will make your pregnancy very painful; in pain you will bear children. You will desire your husband, but he will rule over you.”

17 To the man he said, “Because you listened to your wife’s voice and you ate from the tree that I commanded, ‘Don’t eat from it,’ cursed is the fertile land because of you; in pain you will eat from it every day of your life.

18 Weeds and thistles will grow for you, even as you eat the field’s plants; 19 by the sweat of your face you will eat bread until you return to the fertile land, since from it you were taken; you are soil, to the soil you will return.”

20 The man named his wife Eve[d] because she is the mother of everyone who lives. 21 The Lord God made the man and his wife leather clothes and dressed them. 22 The Lord God said, “The human being[e] has now become like one of us, knowing good and evil.” Now, so he doesn’t stretch out his hand and take also from the tree of life and eat and live forever, 23 the Lord God sent him out of the garden of Eden to farm the fertile land from which he was taken. 24 He drove out the human. To the east of the garden of Eden, he stationed winged creatures wielding flaming swords to guard the way to the tree of life.

1 The man Adam knew his wife Eve intimately. She became pregnant and gave birth to Cain, and said, “I have given life to[a] a man with the Lord’s help.” 2 She gave birth a second time to Cain’s brother Abel. Abel cared for the flocks, and Cain farmed the fertile land. 3 Some time later, Cain presented an offering to the Lord from the land’s crops 4 while Abel presented his flock’s oldest offspring with their fat. The Lord looked favorably on Abel and his sacrifice 5 but didn’t look favorably on Cain and his sacrifice. Cain became very angry and looked resentful. 6 The Lord said to Cain, “Why are you angry, and why do you look so resentful? 7 If you do the right thing, won’t you be accepted? But if you don’t do the right thing, sin will be waiting at the door ready to strike! It will entice you, but you must rule over it.”

13 Cain said to the Lord, “My punishment is more than I can bear. 14 Now that you’ve driven me away from the fertile land and I am hidden from your presence, I’m about to become a roving nomad on the earth, and anyone who finds me will kill me.”

15 The Lord said to him, “It won’t happen;[c] anyone who kills Cain will be paid back seven times. The Lord put a sign on Cain so that no one who found him would assault him. 16 Cain left the Lord’s presence, and he settled down in the land of Nod, east of Eden.

17 Cain knew his wife intimately. She became pregnant and gave birth to Enoch. Cain built a city and named the city after his son Enoch. 18 Irad was born to Enoch. Irad fathered Mehujael, Mehujael fathered Methushael, and Methushael fathered Lamech. 19 Lamech took two wives, the first named Adah and the second Zillah. 20 Adah gave birth to Jabal; he was the ancestor of those who live in tents and own livestock. 21 His brother’s name was Jubal; he was the ancestor of those who play stringed and wind instruments. 22 Zillah also gave birth to Tubal-cain, the ancestor of[d] blacksmiths and all artisans of bronze and iron. Tubal-cain’s sister was Naamah.

23 Lamech said to his wives, “Adah and Zillah, listen to my voice; wives of Lamech, pay attention to my words: I killed a man for wounding me, a boy for striking me;

24 so Cain will be paid back seven times and Lamech seventy-seven times.”

25 Adam knew his wife intimately again, and she gave birth to a son. She named him Seth[e] “because God has given me another child in place of Abel, whom Cain killed.” 26 Seth also fathered a son and named him Enosh. At that time, people began to worship in the Lord’s name.

28 When Lamech was 182 years old, he became the father of a son 29 and named him Noah, saying, “This one will give us relief[b] from our hard work, from the pain in our hands, because of the fertile land that the Lord cursed.” 30 After Noah’s birth, Lamech lived 595 years; and he had other sons and daughters. 31 In all, Lamech lived 777 years, and he died. 32 When Noah was 500 years old, Noah became the father of Shem, Ham, and Japheth.

1 When the number of people started to increase throughout the fertile land, daughters were born to them. 2 The divine beings saw how beautiful these human women were, so they married the ones they chose. 3 The Lord said, “My breath[a] will not remain in humans forever, because they are flesh. They will live one hundred twenty years.” 4 In those days, giants lived on the earth and also afterward, when divine beings and human daughters had sexual relations and gave birth to children. These were the ancient heroes, famous men.

5 The Lord saw that humanity had become thoroughly evil on the earth and that every idea their minds thought up was always completely evil. 6 The Lord regretted making human beings on the earth, and he was heartbroken. 7 So the Lord said, “I will wipe off of the land the human race that I’ve created: from human beings to livestock to the crawling things to the birds in the skies, because I regret I ever made them.” 8 But as for Noah, the Lord approved of him.